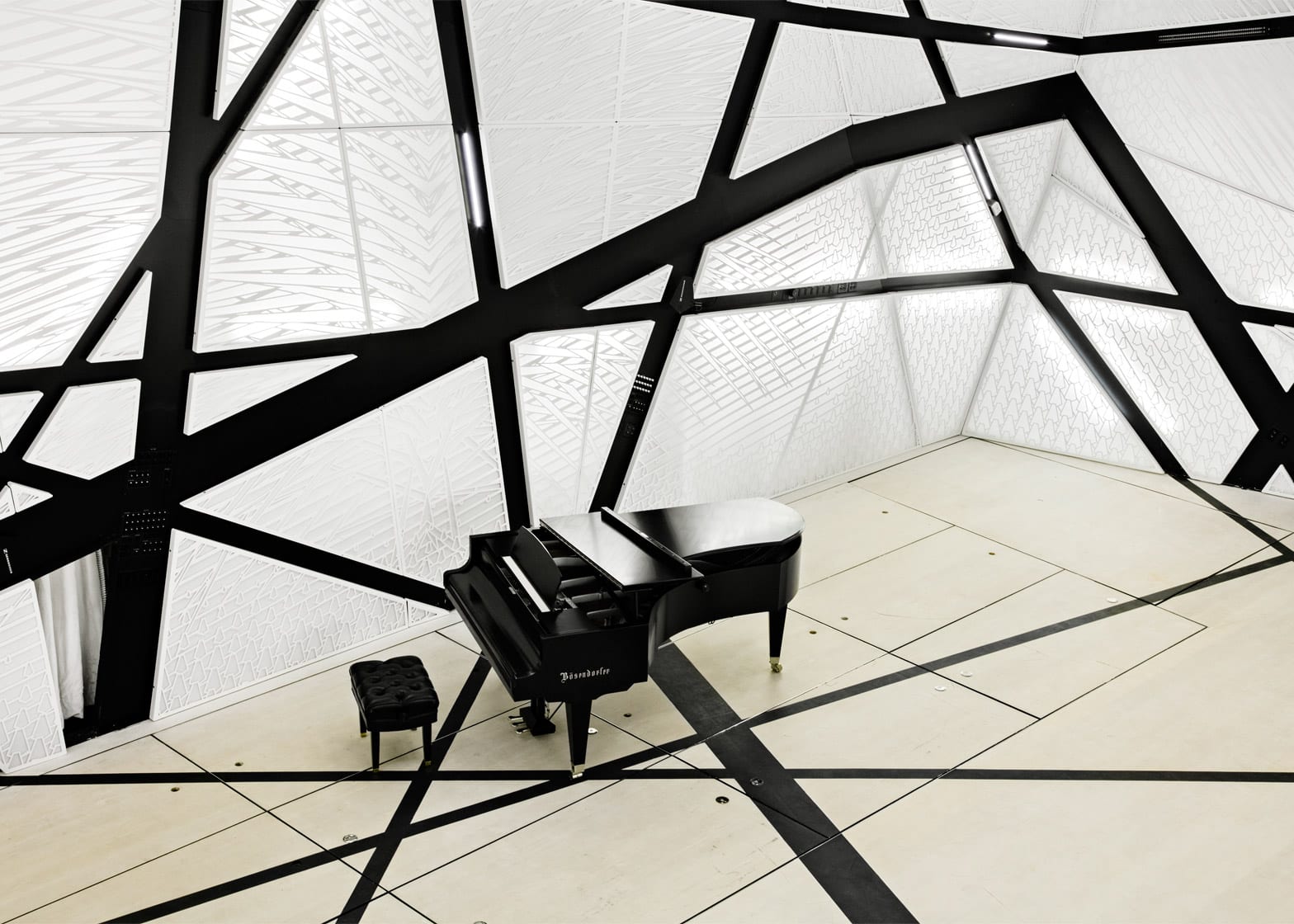 Behind a factory façade decorated with colorful creations, the auditorium at National Sawdust is even more striking. Intersecting black lines on the white walls, floor and ceiling break up a symmetrical space to generate the illusion of irregularity.

“In any major city, a post-industrial arts space is very understandable, so we wanted that familiarity and comfort, but also something that would linger in the memory,” said architect Peter Zuspan, a founding principal at Bureau V. “When you come through the lobby, it feels completely strange and different.”

The zigzag channels are made from aluminum that is perforated to achieve acoustic transparency, finished with a synthetic fabric commonly used to protect the speakers of sound systems. The black channels also house technical elements such as lighting, power outlets and AV panels, eliminating visual interference from wires or cables.

The 12 interchangeable units measuring 1×2 m comprising the stage allow its configuration to be set depending on the show, with room for as much as 70 percent of a full orchestra. The auditorium is shielded by a custom 3×3 m vertically sliding door manufactured by Clark Door. It can be closed to effectively seal the space during acoustically sensitive performances.

Despite a strong synthesis between functionality and eye-catching aesthetics, some of the most intriguing innovations at National Sawdust—which opened in 2015—are not visible to concert-goers. Bureau V worked closely with engineers at Arup, a firm that uses proprietary data modeling software to simulate the acoustics of a space,a sonic parallel to architectural visualizations.

“National Sawdust was the most complex project per square foot that we’ve ever done,” said consultant Matthew Mahon, who has been with the company since 2008.

He identifies the most unusual feature as a set of velour curtains that hang between the acoustically transparent “skin” of the auditorium and the concrete outer wall; they allow the room to be tuned to artistic needs.

“Massive” black and white velour drapery surround Brooklyn’s music venue, National Sawdust, creating an “acoustic envelope”. iWeiss Theatrical Solutions built and installed a line-shaft for lighting positions and all of the drapery is hanging on iWeiss curtain track and attached by custom brackets into the solid concrete shell.

“It’s always going to look the same, even though we’re changing the acoustics,” Mahon told ArchiExpo e-Magazine. “When the concrete walls are exposed, it makes the room more reflective. When the drapes are in place, it becomes drier and less reverberative, which is more appropriate for amplified music.”

The auditorium is a box within the old factory shell surrounded by about 60 springs to absorb vibrations from trains rumbling their way from Manhattan to Brooklyn. “If you go to a movie in New York, you hear the subway,” said Zuspan of Bureau V. “The building precludes that noise because the sprung area is totally insulated.”

You’ll want to check out this article and podcast entitled Reverb: The Evolution of Architectural Acoustics by 99% Invisible.

Check out the latest acoustic suspended ceilings on the virtual exhibition site ArchiExpo.