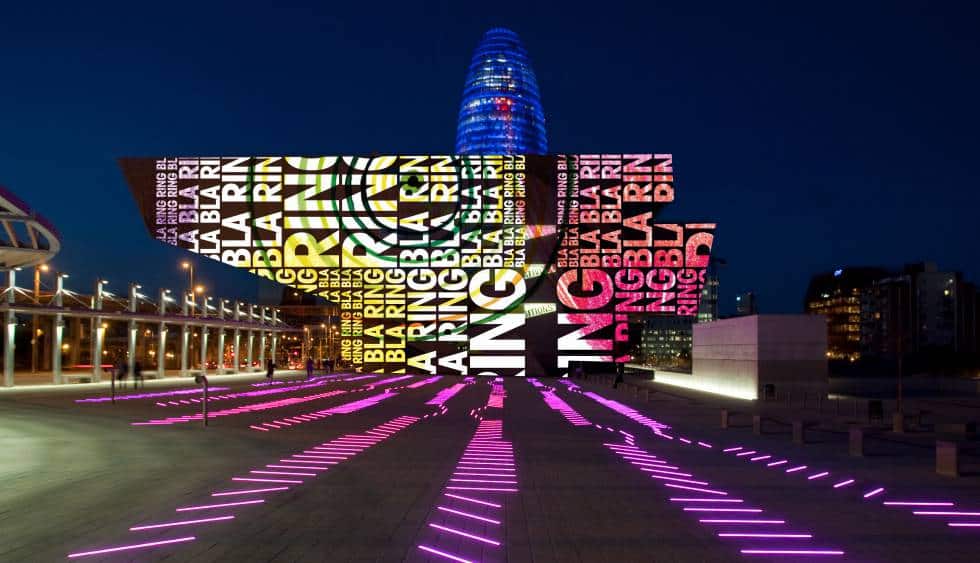 ArchiExpo e-Magazine interviewed Onionlab, pioneers in 3D projection mapping, and professors from the Universitat Politecnica de Catalunya (UPC School) and discovered how Barcelona gets lit up by a growing number of design creatives.

Barcelona has become the place to visit in regards to viewing the best innovative outdoor projects and lighting projections created by lighting design firms and creative studios. Various design schools have also become the breeding ground of creative talents that are contributing to the vibrant design scene in the city.

Established in 2005 by Aleix Fernandez, Onionlab are pioneers in transforming many structures and open spaces in Barcelona with their 3D projection mapping projects. They did collaborations with design firms and architects that have produced successful artistic lighting projects in the city. Fernandez spoke to ArchiExpo e-Magazine:

“One of the previous projects we did with External Reference was for the Expo Yeosu where we created the Spanish Pavilion. Another collaboration piece is Towards Biology, created in collaboration with Ricardo Bofill, a famous Spanish architect, for the exhibition in the Venice Architecture Biennale.”

One of Onionlab’s memorable projection mapping project was presented at the Plaça del Rei during the Llum BCN in 2016 called Axioma, a stereoscopic 3D mapping formed by large, two-dimensional images that have the property of causing three-dimensional effects.

Onionlab’s Creative Director Jordi Pont pointed out that there is a healthy number of studios in Barcelona that have begun to specialize in projection mapping, virtual reality, motion design movies and audiovisual shows. Ponti explained to ArchiExpo e-Magazine:

“There is definitely a growing number of studios like ours. Among the important ones are NueveOjos, Tigrelab, Eyesberg, SlideMedia, Playmodes and Playmid. The last two studios are based in Girona. The best thing is that we are all friends and we know and help each other.”

From a handful of studios doing projects with lighting design firms, the city is benefiting from a creative surge that seems to never cease, thanks to a dynamic synergy between lighting design studios, architects and artists.

An example of a recent collaborative project in Barcelona was the Xiu Xiu, a projection mapping project at the Llum BCN 2018 created by leading lighting design firm artec3 studio, founded by Maurici Ginés in partnership with artist David Torrents.

With support from Institut de Cultura de Barcelona (organizers of the Llum BCN), International Association of Lighting Designers (IALD) and corporate brands, Barcelona has become a fertile breeding ground for talents who wish to create lighting projections in various outdoor spaces spread throughout the city.

Lighting design studio reMM presented a lighting installation called (IN)MATERIAL at the Llum BCN 2018, sponsored by brands that include Difusiona, iGuzzini, and Rosco, showing that corporate support is also involved in the realization of lighting design projects in the city.

Collaborations with students is essential as well in fanning the flames of creativity for each young talent. reMM has also worked with students from IED last year for a lighting installation at the Llum BCN and was given a special award mention.

Lighting design firms in the city would not have the best designers in transforming spaces with light projections if not for the design schools that educate local and foreign students coming to the city.

“We work in a workshop method, we don’t teach. It is the student who learns by putting him or herself in a real context where productive research is the only way to reach a final construction.”

Professor Claret and Ricart’s students who are studying Master in Design and Space Production Course 2017-2018 at the UPC School became part of the Llum BCN this year and presented an ephemeral installation called Continuo at the Passatge de Trullàs.

With creative collaborations and support between associations, local councils, schools, brands, lighting design firms and creative studios, the ray of light seems to continue to shine for Barcelona’s lighting design scene. Only time will tell how it will evolve in the future, for the benefit of all who will view these innovative illuminations in the city that breeds creativity.