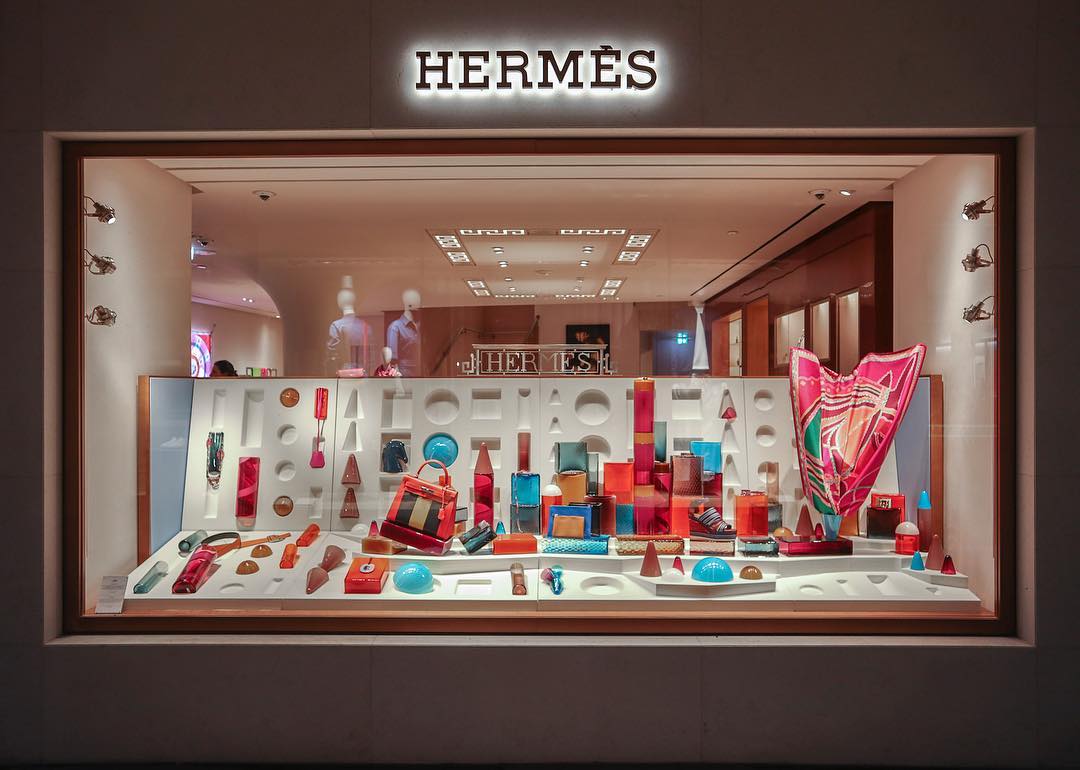 Much like the god of merchants Hermes in Greek mythology, Hermès deserves to sit on the throne for mastering the fashion boutique world. The company thrives on creating dreams for its clients, from the layout of its accessories and luxury products in its shops to the impressive window displays that change a viewer’s state of being. Having already worked with talented designers in the past, such as Portuguese architect Joana Astolfi, Hermès once again marks a designer’s role in the importance of its window designs with the installation Pure Imagination by Nichetto Studio.

The Power of Imagination

The French brand renovated and expanded its boutique on S. Marco 1292 in Venice, at the corner of Salizada San Moisè, adding a second floor and doubling its surface to 264 m². Curated by the French RDAI studio, under the artistic direction of Denis Montel, responsible for all Hermès stores in the world, the location welcomes visitors with a new facade in Istrian stone with warm colors, together with two large windows underlined by a new copper frame.

Nichetto Studio has often been involved in exhibitions and installations; however, they had not previously worked on an “artist window”, as described by Project Manager Daniele Caldari in an interview with ArchiExpo e-Magazine.

Hermès always puts an effort into their window displays, inviting designers and artists to collaborate. After visiting the Milan installation Pyrae / Strata by Nichetto Studio in 2017, the company proposed they work on an installation to inaugurate the renovation of their boutique on S. Marci 1292 which will remain on display until August 2018—crossing paths perfectly with the Venice Biennale. 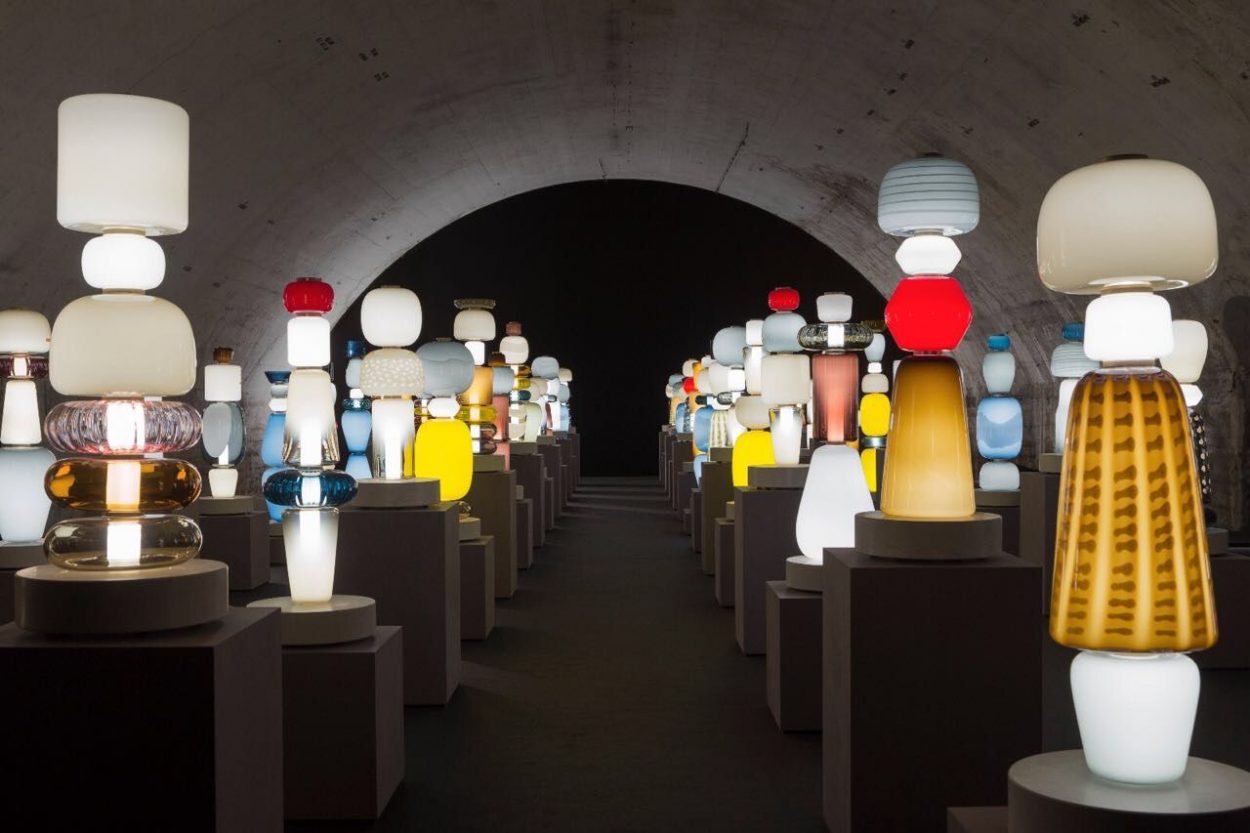 A warehouse in Milan city center housed the Pyrae/Strata installation, a series of unique mouth-blown objects. The Pyrae hall hosted a crowd of figures, a multitude of lighting objects made of stacked glass elements—showcased on fifty-three podiums. Courtesy of Pyrae / Strata

The brief consisted of a specific theme, as is the company’s habit. This year the theme “playful” allowed Luca Nichetto to conceptualize a child’s imagination. The designer thought about the act of playing and found that, most interestingly, children have an incredible power of imagination even when they don’t have a single toy nearby—they can take anything and turn it into anything! He imagined a big box with blocks like a board game with components that one can use in any way to build whatever object, like a train, for example. 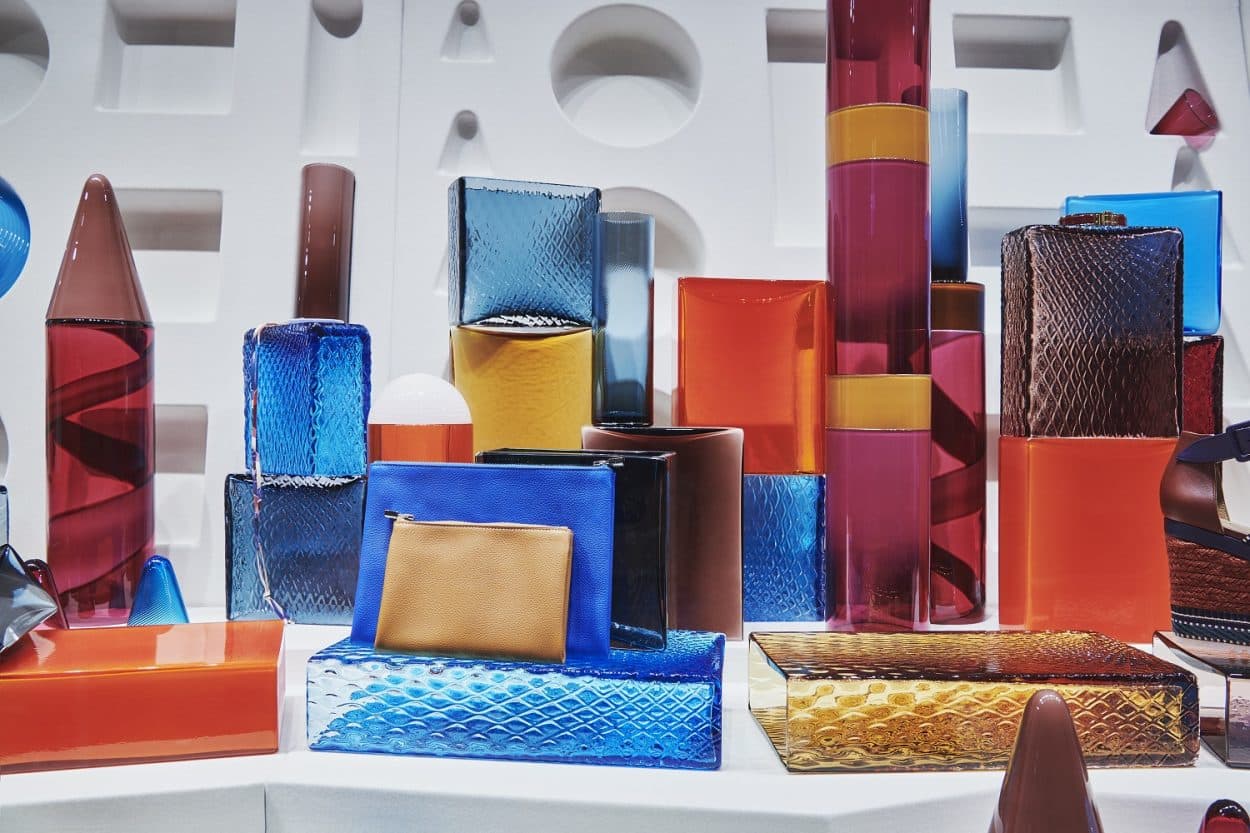 So Luca Nichetto curated the installation Pure Imagination, seen before reaching the boutique’s interior kaleidoscope of tesserae in shades of white and antique pink—a palette of colors inspired by the Venetian palaces. The installation boasts of Murano blown glass of various shapes, colors and multiform geometric volumes, which embellishes the Hermès accessories, bags and scarves in a sort of magical candy-box between fantasy and tradition.

He chose to use Murano glass because it requires a lot of techniques achieved with superior skills, which match the extreme qualities of the Hermès products.

Learn more about the interior in this article (in Italian only). 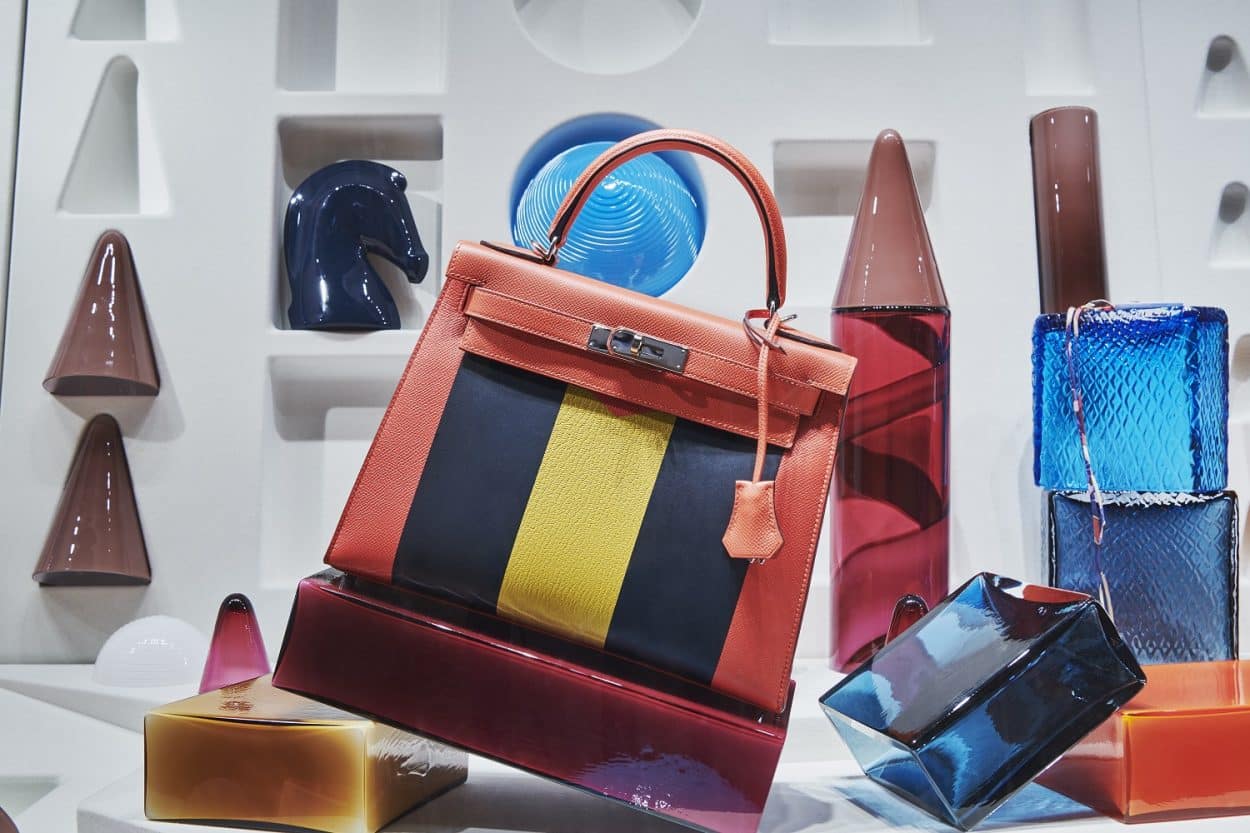 Window designs are very important for brand image, according to Caldari.

“It’s what you see even when you don’t go in. It’s the idea of the shop, the brand. You can combine the functional part while creating an emotional feeling to catch the attention of the passersby.”

It’s always a surprise because you can’t change the concept if it doesn’t work.

Window design differentiates from product design because more elements are involved; however, Luca Nichetto believes that so long as you have an approach, you’ll always ask yourself the right questions. Still, he does not negate the process distinctions:

“When working on a single product, you can do more prototypes and make corrections along the way. With an installation, it’s always a surprise because you can’t change the concept if it doesn’t work.”

No matter the project, according to Nichetto, the same question should pop up first: “What’s its purpose and function?” What do windows need to accomplish for the clients?

“In the case of Hermès, it’s a kind of hommage, an opportunity to offer something free to those passing by and to give a glimpse of what the company does. Craftsmanship is important for Hermès, so we chose to work with Murano glass and to add a pinch of fun to it.” 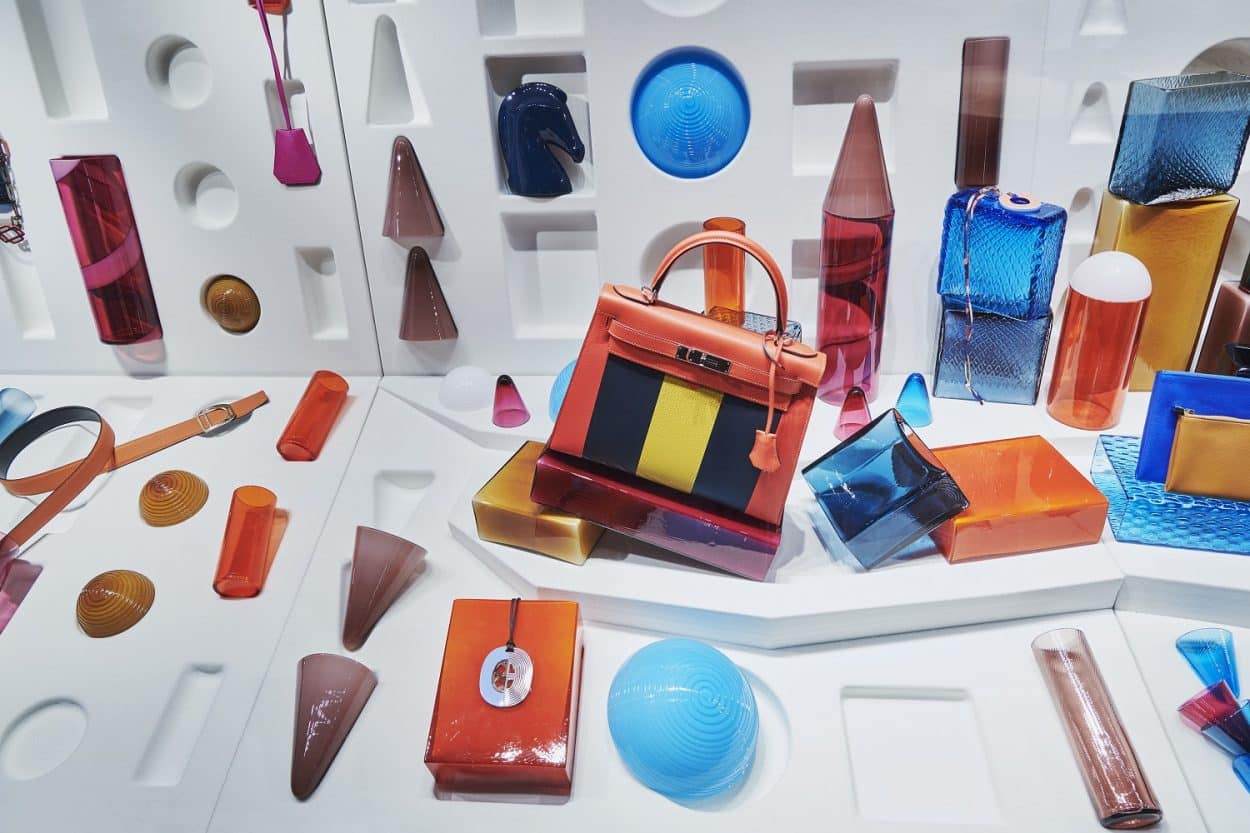 However, selecting to work with glass did bring about a specific challenge: “Venice is becoming a sort of Disneyland for shops selling glass products.”

“I was curious about the reaction of passersby, but people understood immediately that it’s not a glass store. People enjoyed pointing to what they could ‘see’ in the glass toy box.”

Nichetto found serenity working with Hermès. The company had a very clear idea of what they wanted; the brief was precise. A client’s satisfaction, according to Nichetto, is directly related to their expectations.

“If the brief is clear, the designer will have more flexibility to be creative and to surprise the client, as the result reflects the designer’s interpretation of the brief.”

He explained that if the brief is too specific, it will limit a designer’s creativity. The results, in this situation, will never be good enough for both parties.

“Working with a good client is the ultimate design secret.

The commitment will help see you through the longevity of the project, but the client’s faith instills the necessary certainty and confidence to take your creativity to its fullest degree. Any uncertainty can cause disruption in the process.

“I was lucky to work with such a good brand for the first time.”

Interestingly, this first-time quest for designing a window installation may have come as a foreshadowing effect of realization.

“Whenever I spot a window display that I really like, it’s only later that I discover it was done by a designer. I actually became surprised and interested when I found out that certain design studios focus solely on window displays.

Nichetto mentioned Swedish designer Joann Tan, whose studio has done many of the boutique windows in Stockholm as well as Hermès window displays.

“She’s a pure artist. Not only does she design, but she produces!