Home » Will Hospitality & Social Spaces Evolve for the Future?

Will Hospitality & Social Spaces Evolve for the Future?

During a webinar, Hall of Fame architect and interior designer Lauren Rottet talked about what she thinks will happen to our socially-evolving world and the future of hospitality. Curious? Read on.

28 May 2020—Designer and manufacturer Haworth launched an online discussion with award-winning architect/designer Lauren Rottet to have her describe how she sees the world socially evolving over time.

Haworth is known for its adaptable workspace elements, including raised floors, movable walls, office furniture and seating. The company has also much experience in hospitality and break areas.

Lauren Rottet is the founder of Rottet Studio and one of the most celebrated interior architects in the world today, with an extraordinary record of awards, publications, lectures, juries, and honors. She is the only woman in history to be elevated to Fellow status by both the American Institute of Architects and International Interior Design Association. Known for advancing office environments and furniture to reflect contemporary methods of working, Lauren Rottet creates architecturally driven solutions with precise detail—designed to improve the human experience. She’s worked on 40 to 50 hotels, some ground-up, some renovations.

“I’m most worried about bars and what they’ll be like in the future,” said Rottet.

She explained how socialization has changed over the last decade, stating that she hoped “future trends would be educated by history.”

“Revisiting the past helps understand the future,” said Rottet, referencing the Ace Hotel which introduced coworking social spaces in its hotel and the idea went viral.

The live-work social scene has been ongoing for some time now in hospitality, and offices even started adapting its spaces to follow the lead of hospitality by creating social spaces. We’re now seeing hotels with integrated co-working spaces like the new workspace brand “Working From” by The Hoxton that runs on membership.

“Working From” desk stations. Courtesy of The Hoxton.

Today, the main focal point for hotels and restaurants will be bacterial and viral contamination. Rottet was raised by a germ-conscious-doctor father and has been practicing wellness techniques her whole life—she even went half-way through college as a pre-med/art major before settling on architecture.

“Basically, we need to ensure that environments are clean and safe. Social spaces may be the solution to communicate while distancing.”

So how do we make our social spaces clean and safe?

According to Rottet, we’ll need spaces to be more fun, casual and bright, more contemporary and light-filled. The use of “clean” colors might also help, such as green, white, blue and yellow. This would create an environment in which we could see what’s clean; it would entice people to enter the spaces and let them feel safe. She went on to say we need more connections to the outdoors.

“We’re all realizing outdoors is safe,” said Rottet, who foresees an increase in the use of rooftops. 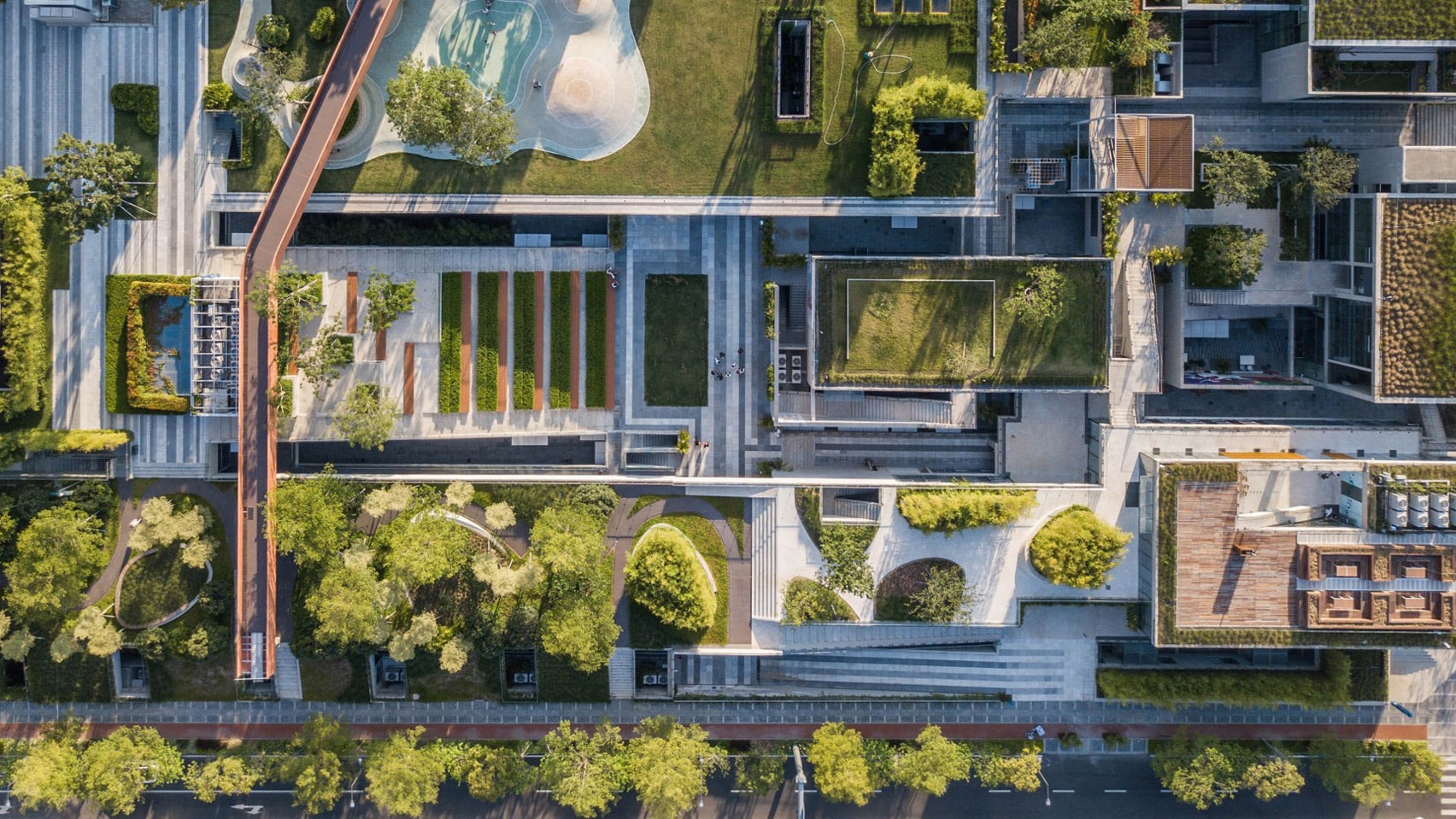 Vanke Design Community is a cluster of workspaces topped by parks (2019). Courtesy of architecture practice FCHA.

In addition to finding a way to open up the building to the outdoors or bringing the outdoors in, another important element is natural ventilation. Buildings need to have fresh air circulating through the rooms. The discussion on how to get fresh air and how it’s being filtered will be crucial to ensure a healthy building.

In the near future, according to Rottet, we might see “cleansing” thresholds at entryways so that people can have their temperature taken instantly before going into a bar. Measures like this have been implemented in certain places, but we might see full-on design pods like health check stations.

She used a quote from an unnamed source to emphasize that buildings, if managed poorly, could spread disease.

“But if we get it right, we can enlist our schools, offices and homes in this fight.”