Home » How to Add Contemporary Touches to an Original Log Cabin

How to Add Contemporary Touches to an Original Log Cabin 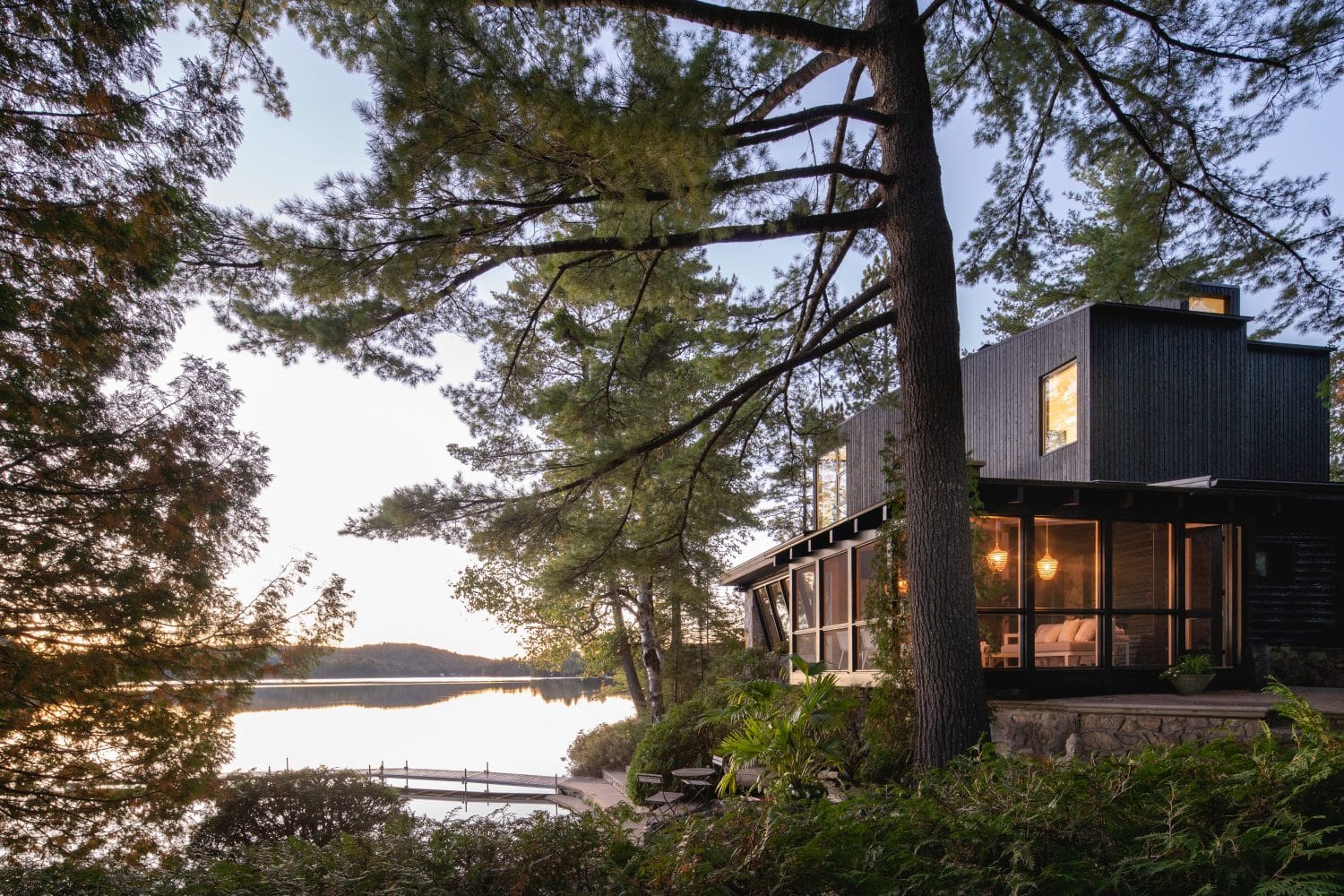 Cottage on the point by Paul Bernier Architect. Photo credit for all images: Raphaël Thibodeau.

In Lanaudière, Canada, an original log cabin has recently been given a contemporary renovation. This project exemplifies how to avoid denaturing an original structure while adding new elements.

In 2020, Canada-based Paul Bernier Architect firm completed work on its Cottage on the point project, a cabin that’s been in the same family for 40 years. The main challenge the architects confronted can be understood in a single question: How can additional elements be incorporated without denaturing the original structure and losing the historical trace?

According to the architects, the solution was not to pretend that this addition had always been there. The project had to allow the old and the new to be clearly visible.

Located on the shore of a lake, the architects planned an extension on top rather than on the sides of the cabin—with the exception of the screened porch. The most evident difference between the old and new is the layout of the logs; a horizontal layout was used to create the original structure, vertical for the new upper floor. 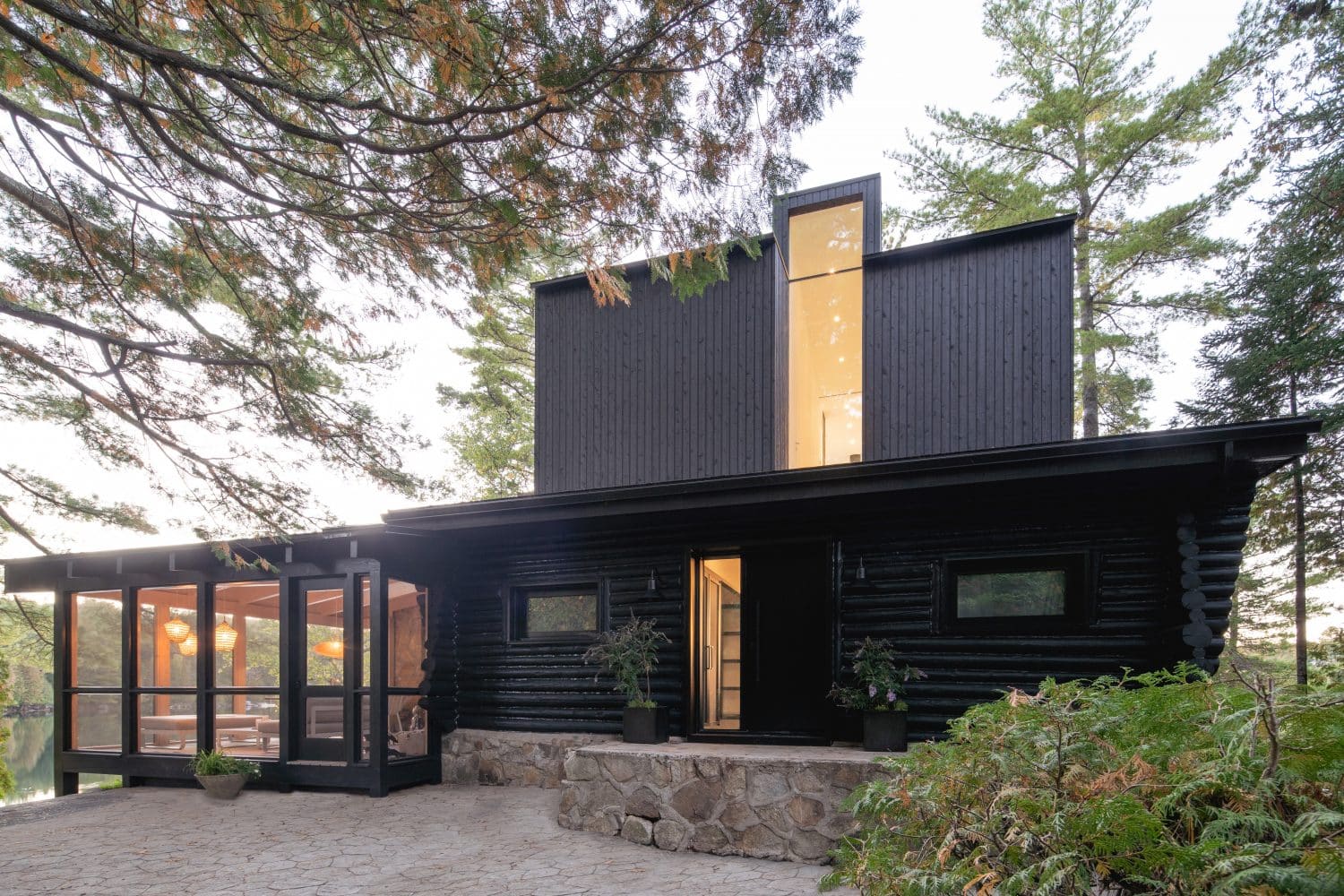 Making Visible the Old and New

The original cabin is made of stone and logs with a sloping roof with wide overhangs. The dark coloring and wooden exterior of the new build refer back to the rustic characteristics of the original cabin. The structure of the roof, now made of Douglas fir, replicates the original.

The old, massive stone fireplace was saved and restored to be made visible from all sides, becoming the center and focal point of the downstairs space. In contrast, the newly constructed staircase is clean and sleek, with light wood steps and a glass handrail, suggesting a more geometric, cutting-edge design. The living room windows are large, slanted panes of glass, that welcome in light from wall to wall, pulling inspiration characteristic of mid-century styling.

The architects managed to preserve the cathedral ceiling of the old cottage despite having added a floor above. In order to achieve this, they’d completely removed the old frail roof and replaced it with a Douglas fir structure but maintained the slopestyle. When viewing the cabin from the outside, the new roof resembles the old one.

The second floor of the cottage hosts the master bedroom. The heightened level and continuous glass walls around the room allow for expansive views from almost any angle. The top floor also contains a large vertical glass opening towards the east side of the cottage that welcomes the early sunrise. Illuminating even the lower level of the building with natural light.

The architects installed a new screened porch on the south side and fitted them with two skylights, discreetly inserted into the structure.

To ensure that the contemporary cottage has an organic, seamless flow into the environment surrounding it, the foundation of it is a massive stone base. The pale tones of the rock create a contrast against the darker paneling of the cottage, further emphasizing the consistent color scheme of the remodel. The stone foundation assists in grounding the cottage—and its modern update—into the nature encompassing it, eliminating the occurrence of a jutting contrast and ensuring an interior and exterior continuity.