Home » In Pisa, COVID Inspires Director to Give the Theater a Makeover

In Pisa, COVID Inspires Director to Give the Theater a Makeover 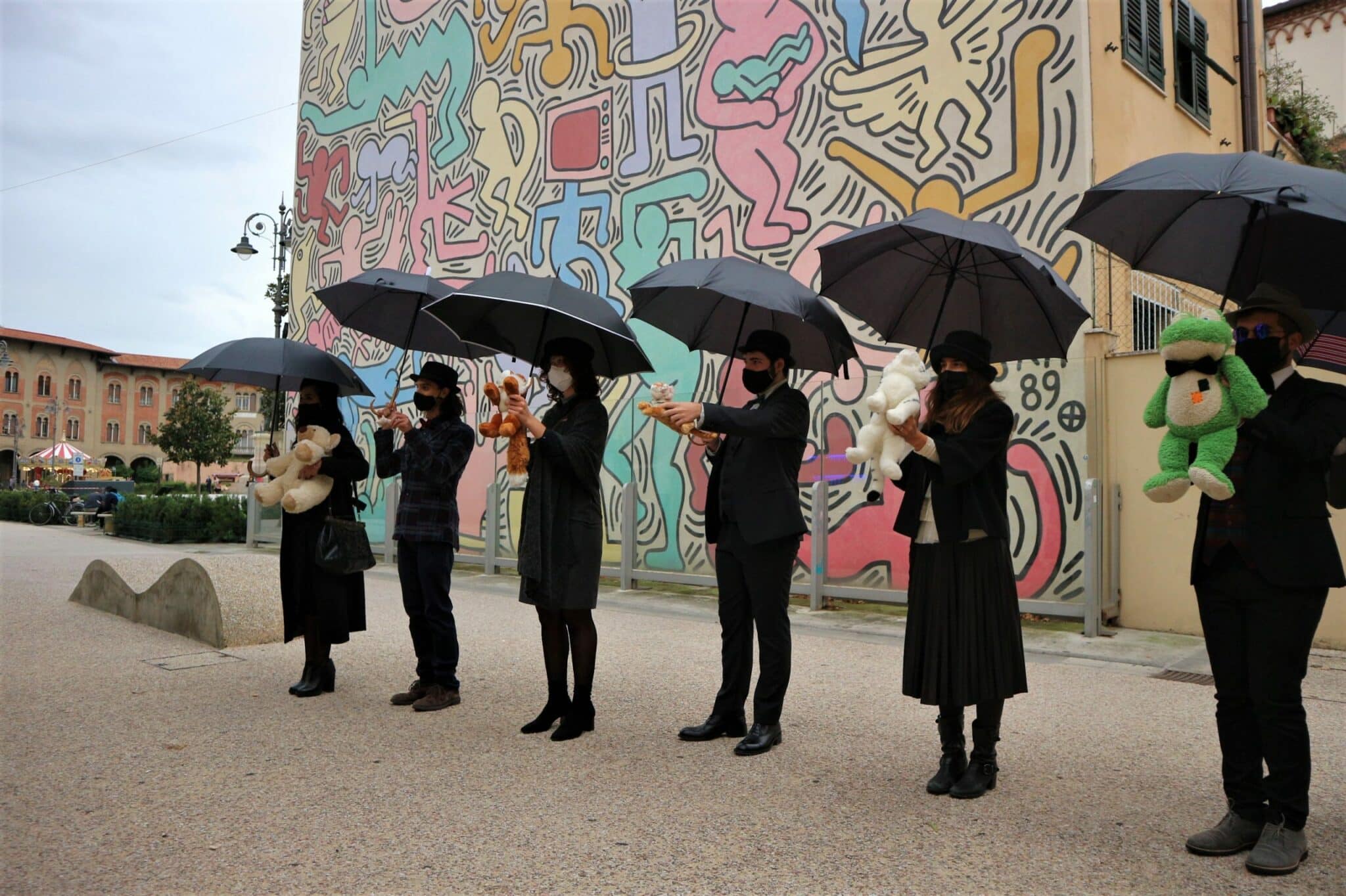 Courtesy of the team behind the Great Invasion

When Italy decided to close its theatres, Italian director Franco Farina began putting together a series of unseen street theatrical performances. And when one of his actors tested positive with COVID, how did he and his team manage to carry out their goal of bringing theater to the people? (This article was translated from its French version).

Although Italy and the rest of Europe closed their theaters and cultural venues; in Pisa, citizens resisted until the end. Italian director Franco Farina took his pilgrim’s staff and personified Pope Francis’ Encyclical “Laudato Si” in artistic response to COVID. His key of entry is the Great Invasion: a series of unseen street theatrical performances.

With the support and participation of other institutes in the city, Santa Anna and Normale, the director and playwright but also trainer at the Verdi Theater, told ArchiExpo e-Magazine:

“We have created a permanent laboratory for creativity. The aim is to think about what type of theater is most useful in times of crisis.”

“We tried to develop an effective ‘plural intelligence’—differing from collective intelligence in that it is an expression of teamship as opposed to leadership. The idea of ​​leadership is disempowering, that of teamship is rather the ability to put together different intelligences, different perspectives, exalting the proportional comparison without thinking that one person is all-knowing. The Great Invasion was coordinated by a table of 12 people who did not think in the same way and who also came from experiences and ‘very different ideas, which is its strength.”

Through the Great Invasion, public space would become a stage where actors attract attention and offer extraordinary acts for citizens to witness. “Imagine, invent,” insists the man of the theater, “but above all, adapt to the health situation and awaken the citizen, the spectator.”

This is what Franco Farina and his partners were betting on by reopening the doors of theaters that remained closed and going out to meet the public as they perform in neighborhoods, squares, parks, streets.

Image Credits: Announcing the event to come. Courtesy of the team behind the Great Invasion.

These young actors and their mentor were following a breadcrumb trail based on The Pope’s Manifesto in which the themes addressed echo the major challenges of humanity: the environment, politics, work, solidarity, immigration, equality between men and women.

“We have tried to give answers to the many questions that the book raises,” said the director.

They wanted to illuminate, through theatrical performances, the changes that will structure tomorrow’s world. 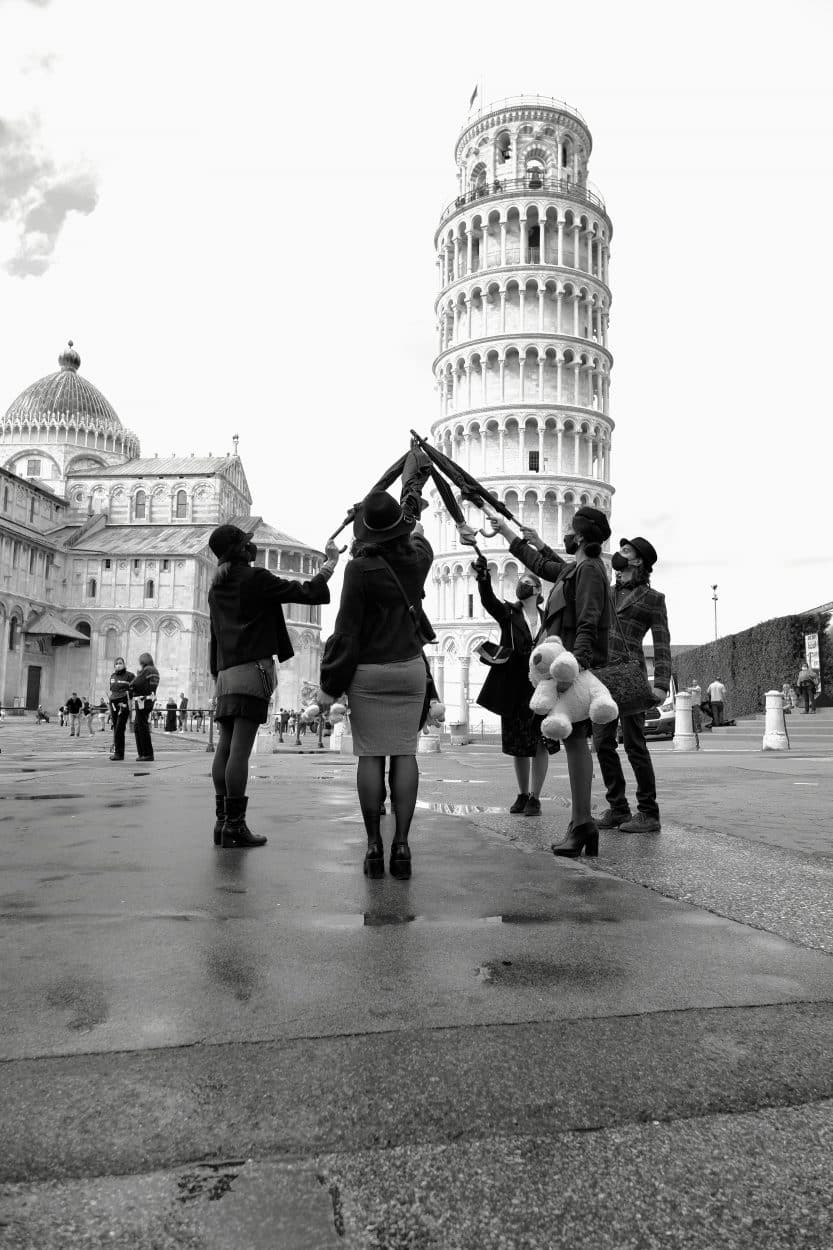 Announcing the event. Courtesy of the team behind the Great Invasion

To announce the event, a group of a few preachers dressed in black, an umbrella and teddy in hand, silently paraded the streets of Pisa. Passers-by wondered what was going on and prepared themselves for an event. The locations of the theatrical performances of the Great Invasion—the why and how—remained a mystery.

But shortly before the artistic performance was to take place, an impromptu cloud in the sky of beautiful Tuscany. A case of COVID among social actors put an end to the event.

The table of 12 coordinators gathered to discuss the next steps. When it became clear that the fear of “saying the wrong thing” prohibited them from being creative, Franco Farina pushed them to break away from the fear or, he said, they could all go home.

“It was very nice to see that the whole table was gradually filled with ideas to be discarded in order to identify and refine the next idea in just two and a half hours,” said Franco Farina.

Franco Farina and his team remained confident. They had more than one string up their sleeve. While waiting for future performances of The Great Invasion, the artists began planning to deploy a treasure hunt in the streets of Pisa.

“Fortunately, we soon had the idea and proposal for the Theater Hunt,” said actor Daniele Matronola. “I knew it would take more energy from an organizational point of view, paradoxically. But I really liked this initiative.”

On Saturday, October 25, the first treasure hunt took place. Clues were given via Facebook and led participants to six different treasure chests. The first five chests contained a gift, while the sixth one offered two lucky winners a theater ticket for a play that would take place the next day. On Sunday, the lucky ones attended the open-air show of ten minutes, taken from the ensemble of 70 performances originally scheduled for the event, in one of the secret districts of Pisa.

“This experience allowed me to tell the story I had chosen, my monologue, to two people who I knew would be able to see and hear it,” said actor Daniele Matronola. “The importance and urgency, or rather my need to tell the story doesn’t change depending on how many people I tell it to. Seeing two people who chose to be there, regardless, boosted my confidence.”

“It was very nice to see the participation of the citizens who supported us even when we had to stop, sharing and commenting on social media or writing privately to some of us. It was one of the first moments that I felt how theater is an event or a social phenomenon,” said Daniele Matronola.

Indeed, the Great Invasion was an opportunity for all during a time of frustration and sadness. According to two of the winners, it was the only chance they had to approach the complex and wonderful world of theater.

“The performance we attended was fascinating,” said winners Giordana and Gabriele. “We left laden with questions. The intimate environment made us feel special, although we had already felt special and lucky the day before when we found the box with the show invitation ticket. Still, it was strange to experience it in a ‘crowd’ of so few people. We can’t wait to have the possibility again to be several in the same place, without fear.”

Image Credits: One of the private shows. Courtesy of the team behind the Great Invasion.

Four out of five planned treasure hunts took place while only three out of four theater pieces could be carried out before the government implemented more restrictions. In the sixth treasure chest of the last hunt, the recipient received a letter stating that for evident reasons the show could not be held.

Everything halted on Sunday, November 15.

As the lockdown gradually closes in on Italy, let’s hope that the message of Franco Farina and his companions will resonate in other cities in Europe and around the world. There are already whisperings that other directors around the planet could join in their efforts and theatrical experiences to form a great artistic “Fratelli Tutti” and in this way, help bring the planet out of its torpor.

However, what forms the event might take depends on the current situation in its entirety.

“The Great Invasion has not yet found its ‘final version’ because it reacts to the evolution of the current situation and therefore has only draft versions,” said Franco Farina.

“At the moment, it is the Theater Hunt that is waiting to understand if and how it will have to change form again. The Great Invasion right now is a garrison of collective creativity from a group that doesn’t just resign themselves to the idea of being forced into unproductive hibernation.”

Patricia Lesueur is a French journalist living in the South. After studying journalism in Paris, Patricia took part in various editorial projects for the press, publishing, advertising agencies but also for radio and television.