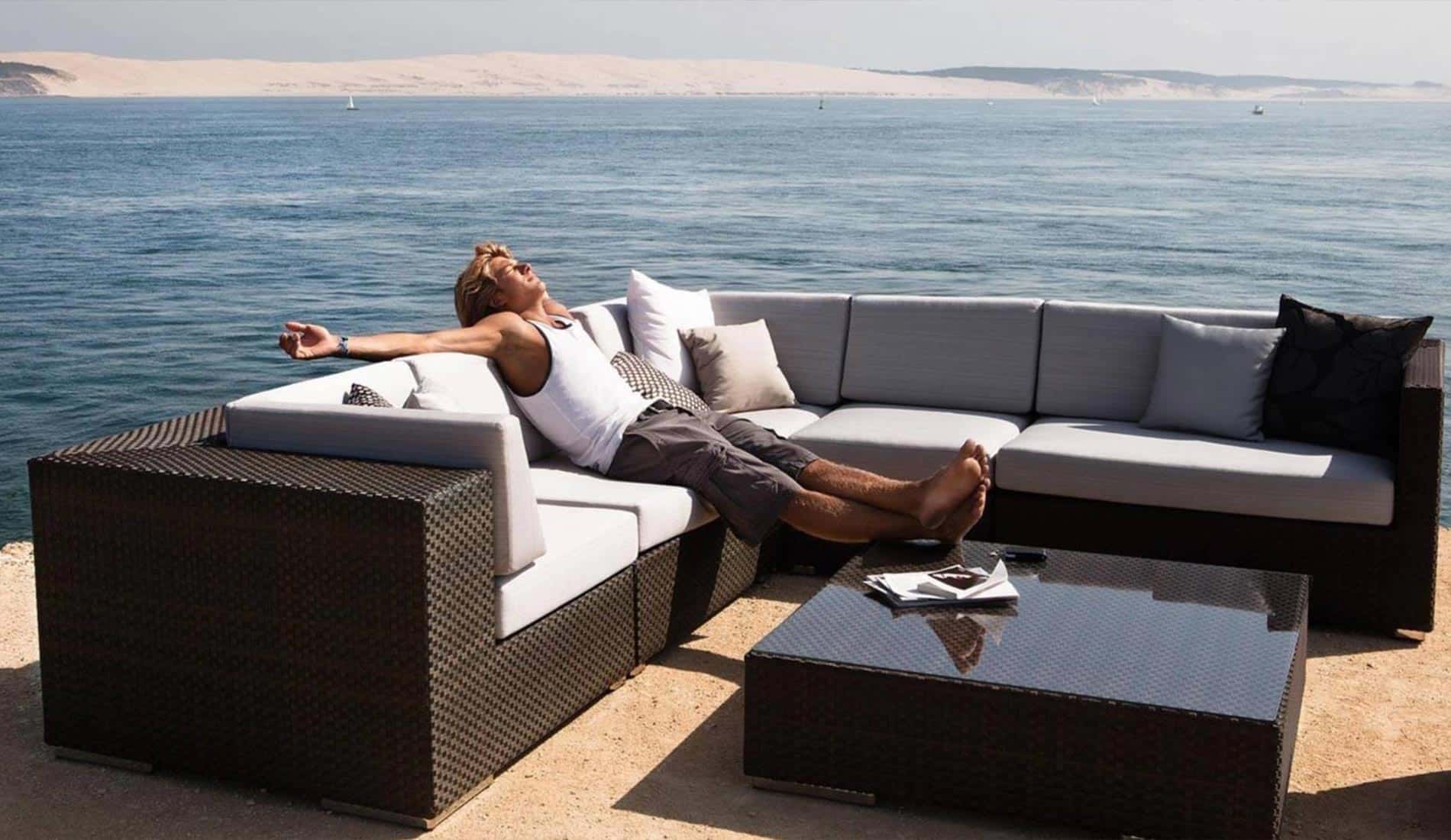 Kvadrat and Dedon aim to be industry leaders with Patio, an innovative textile 100% free of fluorocarbon.

PFCs break down very slowly; they can remain in the environment for many years.

In 2016, a report by Greenpeace sent shock waves around the outdoor market. Outdoor gear, from clothing to shoes to furniture, is laced with hidden hazardous chemicals that have been found in the livers of Arctic polar bears and in human blood, the report indicated. Used for weatherproofing due to their ability to repel water and dirt, polyfluorinated chemicals (PFCs), it turns out, are entirely too resilient.

“Once released into the environment most PFCs break down very slowly; they can remain in the environment for many years after their release and are dispersed over the entire globe,” states the report, which also suggests the substance, which is “potentially carcinogenic in animal tests,” can be harmful to both our reproductive and immune systems.

Danish company Kvadrat took note of the headlines, and in May, at the annual Copenhagen design event 3 Days of Design, the textile manufacturer launched its first outdoor textile. Thanks to its innovative flame-retardant Trevira CS polyester yarn, Patio by Karina Nielsen Rios is 100% free of fluorocarbon yet still durable and water-resistant. It’s a bet on future regulation in the industry, as Rios told journalists at the launch:

“Kvadrat hopes to be on the forefront of change on these chemicals, which we expect to be banned in ten years.

Banking on the idea that the best way to present a new outdoor textile is on a new outdoor furniture line, Kvadrat teamed up with outdoor furniture manufacturer Dedon to present Patio in action. Previewed at Milan furniture fair Salone del Mobile and also officially launched at 3 Days of Design, the Brea modular outdoor lounge system by British design duo Edward Barber & Jay Osgerby for Dedon consists of single-seater, two-seater, and three-seater modules and complementary side and coffee tables.

Unique to outdoor furnishings is the mad cushion rush, a sport that happens when the weather takes a turn. Brea’s upholstered sections slip on over backrests, side rests and seating, meaning they can also be slipped off with little effort.

“So when it’s raining, which is predominantly in the UK, you can really quickly throw them inside,” says Scott Barwick, studio director of Barber & Osgerby, with a dig at his homeland.

The removable sections also point to painless change in the future—color swap or fabric replacement consists of new covers versus a trip to a reupholstery.

“It’s a really simple and elegant solution,” continues Barwick, who notes the frame is intended to look distinguished even bare.

As for Brea being “outdoor” furniture, Barwick takes issue with the terminology. “It’s a transitional piece that can be moved from inside to outside. These days, with more glass used in architecture, fabrics really need to have UV properties so they don’t fade over time.”