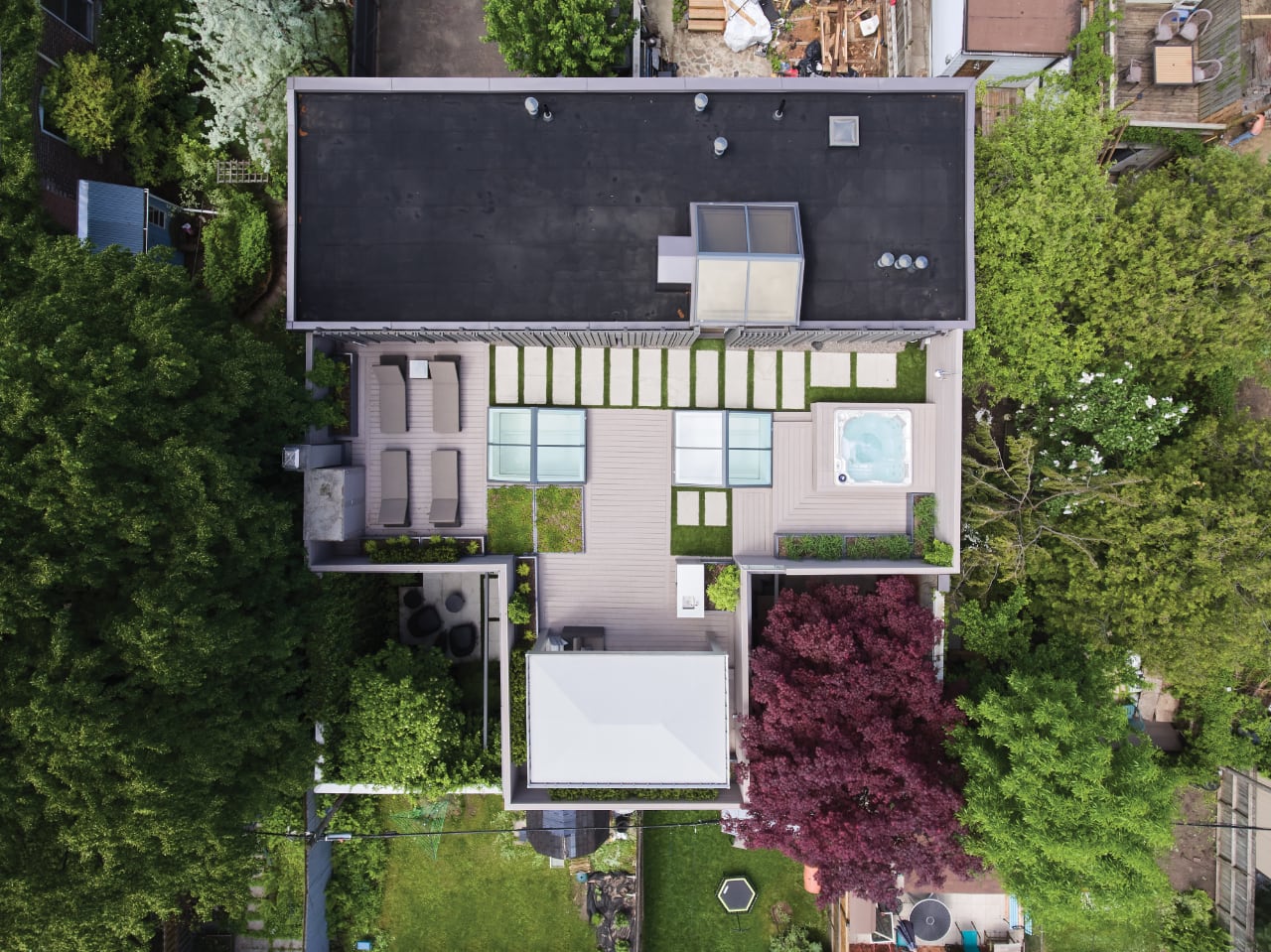 Renovated from scratch in a two-year process, the 3,200 square feet house combines modern design with warm colors and vintage furniture

Created in 2000, the Canadian award-winning firm Taylor_Smyth Architects has developed an international reputation in projects that go from residential and interior design to educational, workplace and retail spaces.

In the Annex Coach House project the firm teamed up with interior designer Bill Fulghum to renovate a residential house in Toronto, Canada. The building was originally part of a hearse livery and used as a vehicle depot until it was converted into a residence in the 1980s. The only thing left from the livery days are the brick walls in the courtyards, and they were maintained in the renovation.

“It’s always nice to retain a sense of history when you renovate something. And these walls are a lovely counterpoint to how we finished everything inside” says Michael Taylor, the architect in charge of the task. 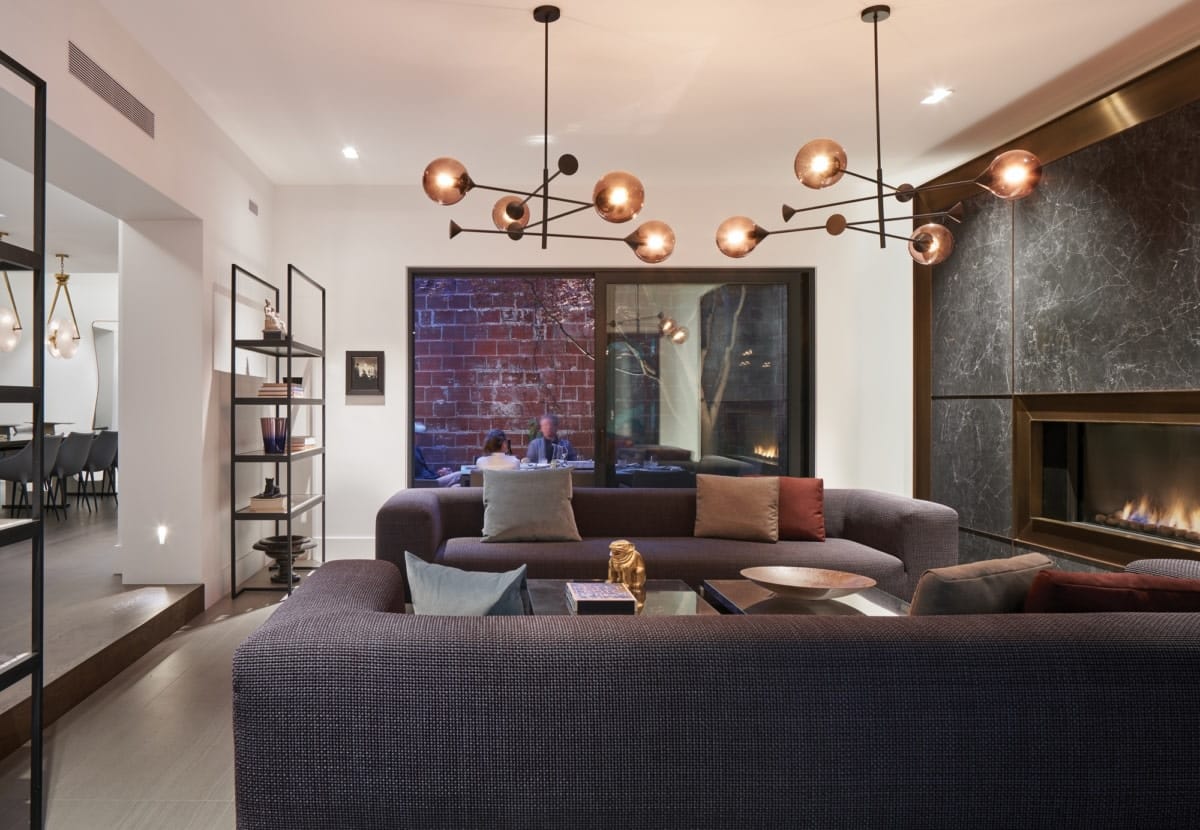 In their joint interview to ArchiExpo’s e-Magazine, Michael and Bill said they were particularly excited about the two beautiful courtyards that flank the den, an old and big Japanese maple tree in the garden and the skylights bringing light directly down into the space. The fact that the building was tucked away from the street, behind another house, was also a plus. However, moisture and vines growing inside the walls were some of the problems not picked up by building inspection.

“When the contractor started opening things up there was so much damage that everything had to come out. It would have been less expensive to actually take the structure down and rebuild. But due to zoning restrictions we couldn’t do that and had to start from scratch” says Bill.

Four very important good things were firm in place though: an enthusiastic client with strong points of view in terms of aesthetics and yet very open to suggestions, a great location, a good budget and a skilled, matched architect and designer duo.

One of the main things Michael decided to do was dropping the central portion of the ceiling and “washing” it with indirect lighting all the way around. The final result was a single ceiling plane unifying both the living and dining room and floating away from the walls.

“If this had just been a flat ceiling with a couple of skylights punched into it, it would feel like a bowling alley,” he explains. 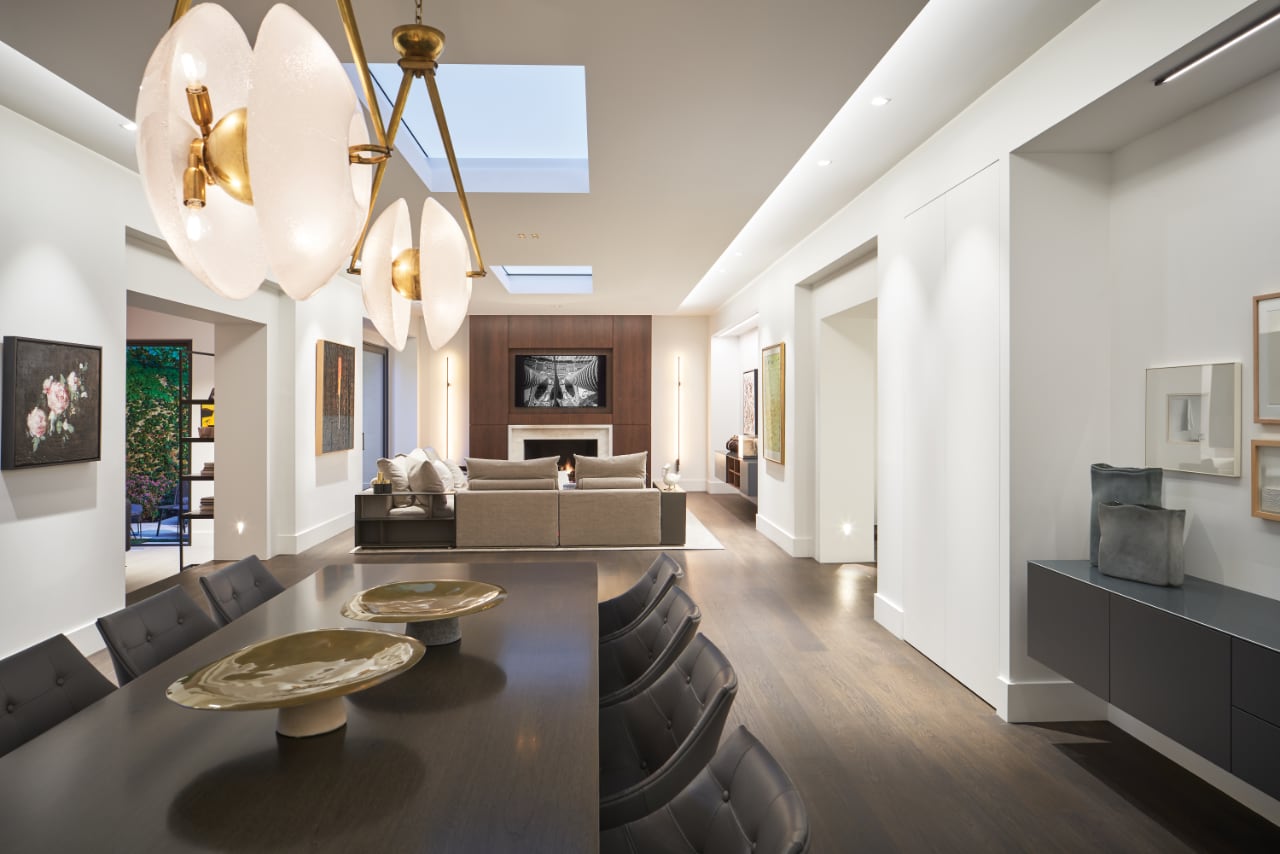 As the client wanted a dark floor, everything was done with that in mind; and Michael and Bill created a rich material palette of wood, stone, bronze and leather.

“The colors we used are a warm take on modern, and the furniture from the client’s former home had to be ‘edited’, distilled to the essence of what we wanted to make. It’s all about how you balance and integrate things” says Bill.

It is hard not to immediately lay eyes on the gas fireplace placed in front of the dramatic wall of dark veined stone trimmed in bronze. Michael and Bill designed it three or four times in totally different ways until they came up with that solution.

“If the fireplace was light, it would disappear into the dark floor. So we eventually found a type of porcelain that looks like marble and the client loved it straight away. This person wanted something different for this fireplace and was willing to wait until we found the right thing,” says Bill. 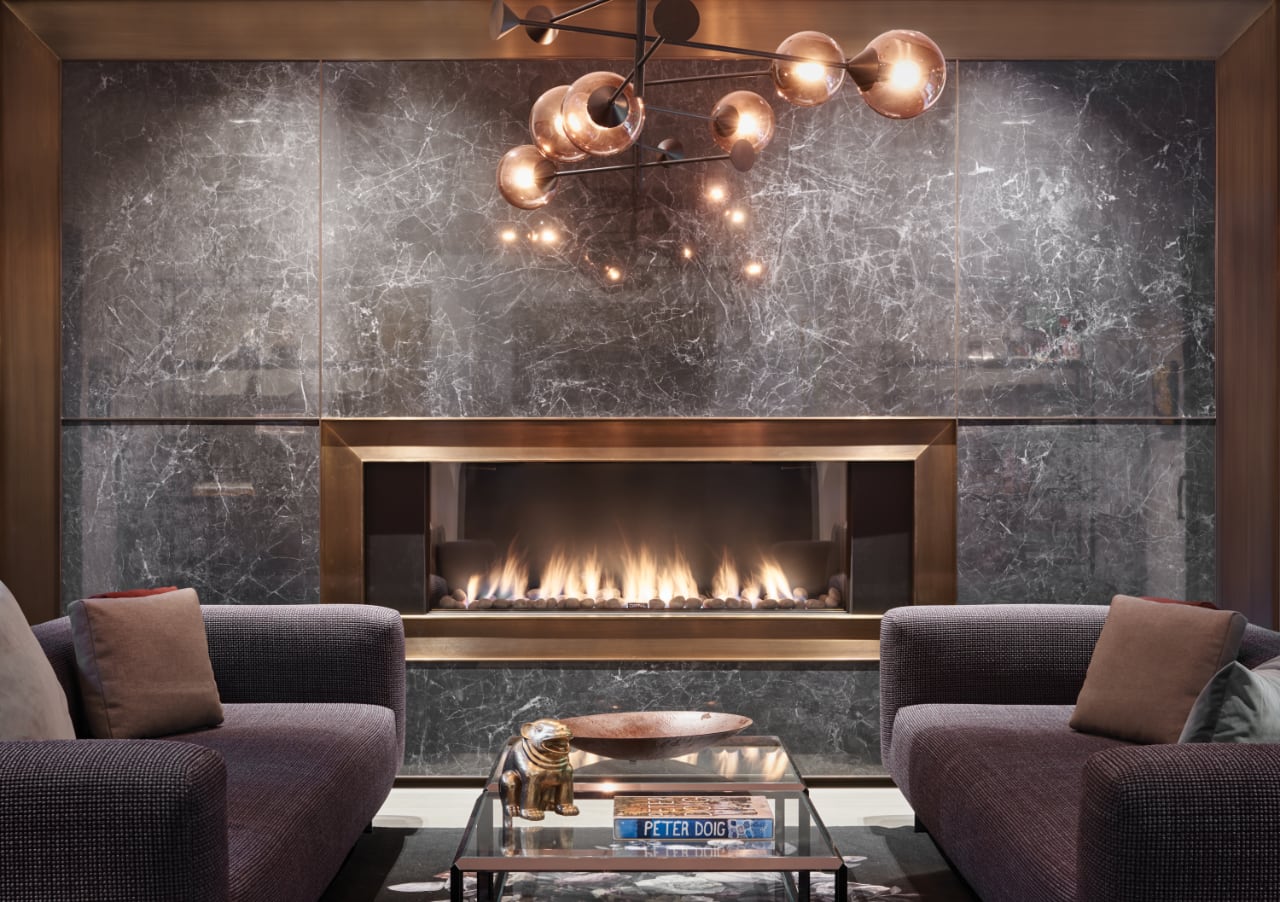 Being willing to wait for the items that fall into place was also important when picking the vintage (mainly from the 1960s and 1970s) or more flaring items of furniture and accessories. The hourglass type shape mirrors in the living room, for example, were imported from Italy by a specialized dealer.

An example of the attention to detail in this project can be seen in the stairs that connect the living room to the upper floor. Made in bronze, the handrail is attached to a first step that is different from the others that follow.

“We made the first step with the same stone used on the main living room and in the counter close to the handrail. Wood connecting to wood wouldn’t feel substantial enough. We wanted to give it more sense of presence but keep it modern and trendy. Details are extremely important when there’s very little. It is crucial that everything is executed very well,” he says. 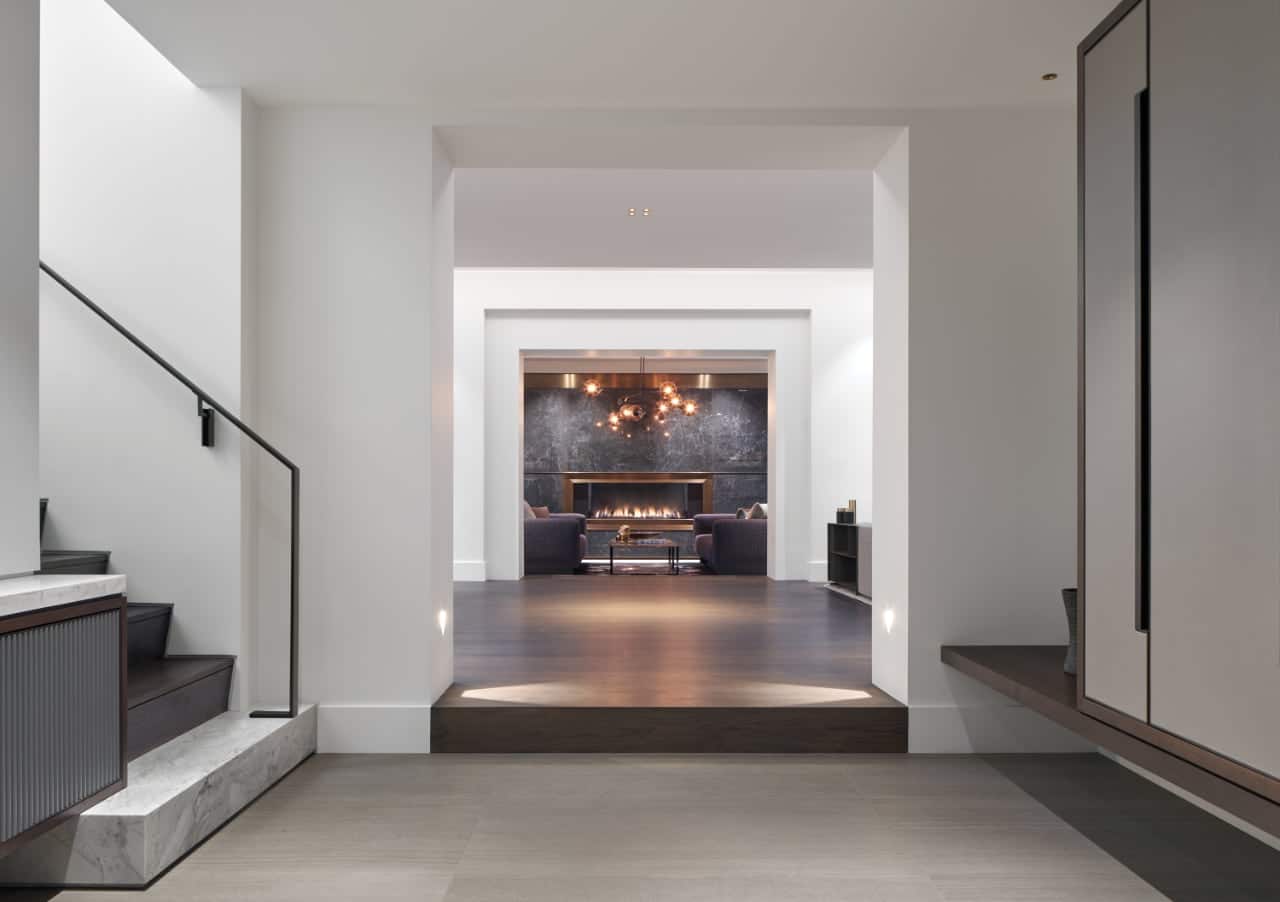 The extensive rooftop terrace is another major feature of the house. With raised planters and a series of decks, there is plenty of room to relax or invite family and friends over. A custom wood screen with vertical slats creates a light and shade composition that conceals the wall of the second floor – where the master bedroom, a second bedroom, the walk-in closet, the ensuite bathroom and a second bathroom are.

The landscaping of the outdoors of the house was done by Holbrook + Associates Landscape Architects. 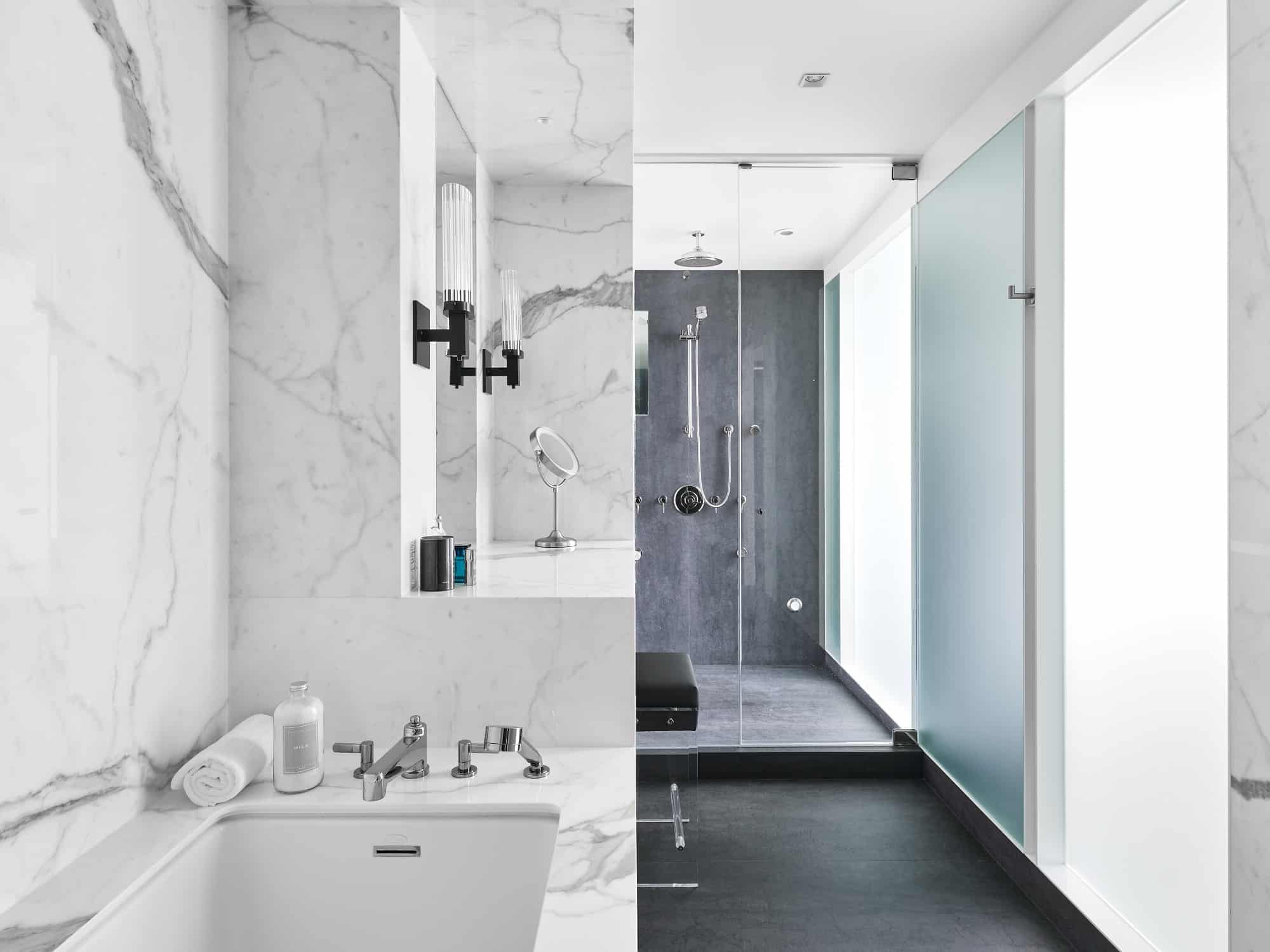