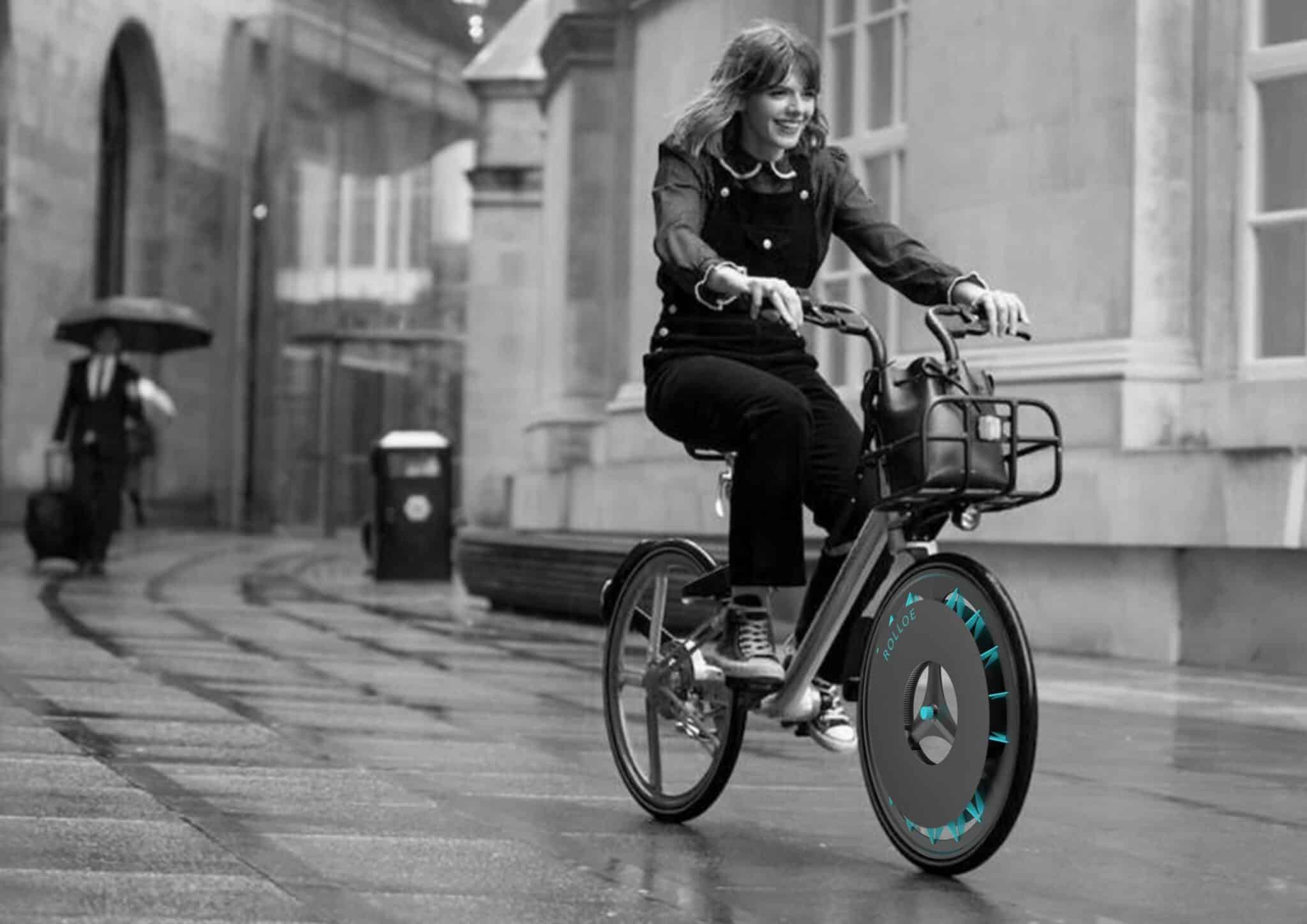 Designer Kristen Tapping won the Design Innovation in Polymer 2020 award for her innovative bicycle wheel that filters outdoor air pollution: GoRolloe. We speak to the designer about her creation and get the latest information on its entry into the market in 2022.

As a product design engineer, Kristen Tapping has come up with a variety of design solutions that incorporate sustainability into everyday products. Such is the case with her award-winning GoRolloe, a bicycle wheel that filters air pollution, set to be available on the market come 2022.

In March 2020, Kristen Tapping was cycling around London with the details of a brief for urban settings in mind. On a bicycle herself, she began to think about how the bike could help cut down on air pollution. The idea for her GoRolloe wheel came to her, and she got to work. She entered the product concept in a Design, Innovations and Plastics competition.

“When you become a finalist, you have to finetune your idea and figure out how it will actually work. We did more prototyping and engineering to take it to another level. After winning the competition, I got a lot of international media requests for the product so I started thinking this could be commercially viable. This thought came to me around July or August (2020).”

The designer is currently working on new prototypes while awaiting a grant which will allow the product to become available next year. The new “skin” of the updated GoRolloe product is private but by this October, we might get a preview of how it looks.

How the GoRolloe Wheel Works

Kristen Tapping is a product design engineer originally from Brittany but now living in London. While she would generally work with a mechanical engineer, this project didn’t require expertise outside her own abilities.

Polluted air travels through the interior cylindrical opening, gets pushed through the set of filters using centrifugal force and is expelled out through the exterior perimeter. The filters can trap noxious gases and particulate matter (PM10-2.5; Ozone, O3; NO2; and CO2). The filter system uses a loofah sponge, a washable HEPA and activated carbon. The filters are reusable, and captured pollutants are reused for third party products such as construction materials.

“It’s not rocket science. I’ve just taken established technologies and put them into a product. That’s helped me a bit, but putting these technologies inside a bike wheel has a lot of constraints. There’s drag, crosswind, the frame. There are a million things to consider.”

She’s been currently busy researching filters in order to improve the combination. Since the filters need to be reusable, withstand elements, trap specific matter and gases; Tapping aims to ensure the proper filter system. She said she hasn’t quite found the perfect type of filters but she’s getting close.

Getting the GoRolloe on the Market and Accepting Limitations

It’s all happening rather quickly for Kristen Tapping and her GoRolloe. The London South Bank University where she graduated in July 2020 is supporting her project by printing out 3D prototypes and allowing her to utilize a large area where she sets up her rigs. Barely graduated from the university, her design not only won an esteemed competition but it has received much interest from companies such as The Imagination Factory design firm.

“They like the idea and what to see it done so we agreed to go in on the grand application together.”

Tapping did mention that although her journey toward getting the GoRolloe on the market is moving quickly, there are limitations she must accept—at least for now.

“I don’t think this is a product for road bikes and competitive cyclists because they do everything to minimize drag and this will cause a bit of drag. Also, the bike frames are smaller and wheel rims have less width.”

For the moment, she’s looking to integrate her product on “cycle for hire” bikes which have a more mountain bike type wheel and frame. She’d later want to extend it to hybrid bikes. Molds are costly, so it’s too expensive and complicated to make several models for various bike types.

“I’d prefer to go from business to business in order to make one model for the specific bike the business uses.”

With more funding and money, the designer plans to get into different sizes and the consumer market which has different requirements. 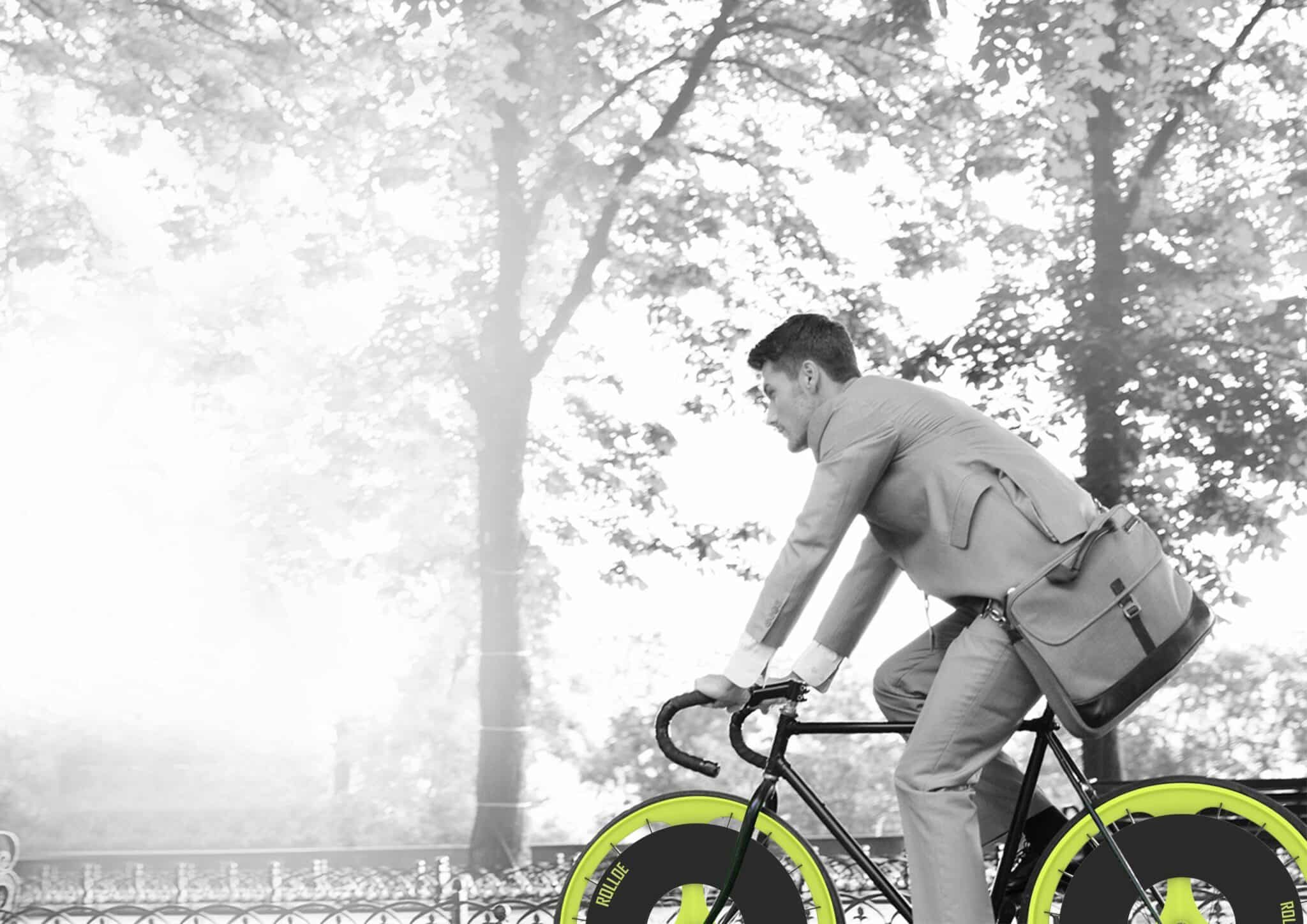 Rewarding Citizens and a Smartphone Application

Tapping’s concept goes beyond the wheel itself. Her idea includes a reward system to entice citizens to cycle. In London, where the bike is currently in development to be on the market by 2022, the idea is to have Transport for London pay commuter cyclists to use a Rolloe wheel by giving them a free wheel or or an ongoing payment per km cycled. TFL could cover the cost of maintenance in relation to the wheel, tire and filters by connecting with local bicycle shops.

This is purely conceptual. No discussion with TFL has been had yet. However, the city of London already gives maintenance vouchers for bikes to encourage cycling. The government pays around 30 to 40% of new bike purchases made by citizens through its “cycle to work” scheme.

Her concept also includes a Rolloe smartphone app that cyclists can use to track performance, rewards and receive alerts of when their next filter change needs to be made based on the distance cycled and time elapsed.

“I can do the prototyping myself for the phone app but it’s better to link with an existing platform like with a 3rd party company for carbon credits where the user gets paid part of the money to cycle around or for the branding of the wheel.”