Lagos, Nigeria, welcomes the Lekki Free Trade Zone (LFTZ)—a $25 billion project with presence of over 64 global companies—and other major projects as the city government supports its transformation into a smart city, modeled after the Smart City Dubai. That’s the plan and it’s underway. Except thousands of citizens from the coastal communities of Lagos have been evicted from their homes, lives destroyed by government land grabs.

In light of the upcoming Real Estate Development Summit in Lagos, Nigeria, [October 28 & 29, 2019], it’s the right moment to zoom in on the current urban projects and how the city is integrating technology in order to become the first smart city in Africa.

Although vacant luxury properties doubled between 2015 and 2016, according to a video report by CGTN Africa, development is booming.

Dangote planned its $14 billion project which includes a petrochemical company, gas pipeline company and fertilizer company, as well as a refinery, to be the biggest refinery in Africa and 6th in the world, to be completed in 2020. The Dangote projects are under construction in the Lekki Free Zone in Lagos, Nigeria.

The Lekki Free Zone. This area. Home to a portion of the country’s poor, otherwise known as fishermen and other tradesmen who came to settle over 60 years ago and called it home. OluTimehin Adegbeye’s own grandfather, who died when she was 9 years old, had made his home in one of the coastal settlements in Lagos. In her sincere TedTalk, she speaks about Lagos and the ramifications of turning it into the “new Dubai”.

In October 2016, the government announced the demolition of all coastal settlements in Lagos—that’s more than 40 indigenous villages across the city with over 300,000 people living in them. Those who did not leave the villages on the first round of demolition were escorted out through beatings, bullets and fire. In the TedTalk, Adegbeye said:

“The government aspires to create a megacity where poverty doesn’t exist. Instead of focusing on the eradication of poverty, they choose to eliminate the poor.”

A larger feat to eliminate the poor than to eradicate poverty, since the State Ministry of Economic Planning and Budget estimated that over 70% of Lagos’ population lived in informal settlements in 2013 and, by 2014, 67% of this population lived below the poverty line of $1 a day.

And still, 50,000 people have been forcibly evicted since 2013, over 30,000 of which were living in Ilburin and Otodo-Gbame waterfront communities. Pushed out to make room for the emergent city described as the “new Dubai”. 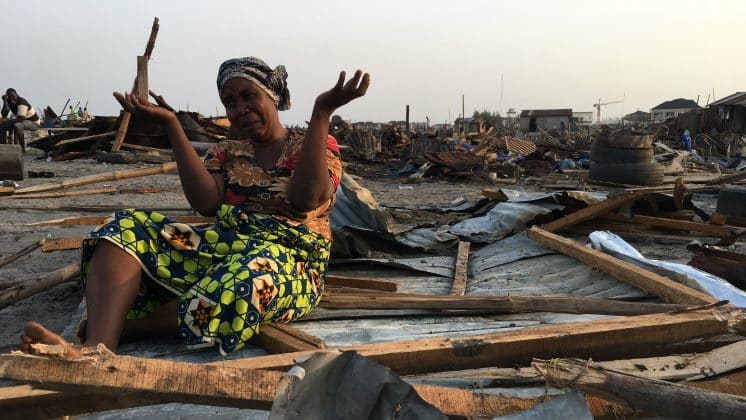 “Forced evictions are incredibly violent and, of course, unconstitutional, but they happen so often in so many of our cities because the first thing we’re taught to forget is that the poor people are people.”

Beyond questioning how “they” decide who belongs and who doesn’t, she came to the conclusion that what most visibly separates citizens is class, that the difference between possibility and impossibility is simply who you are and, if you’re lucky enough, who you’re connected to.

On a similar note, you might like to read an article from our previous issue entitled “NeoCon—Redesigning Our Cities with Geographical Justice”.