Matali Crasset is a proactive designer whose work fascinates, challenges and engages the observer. From an aesthetic perspective, it is at times rather eccentric. However, virtually every project is imbued with a certain honesty and considered functionality. Having debuted at the inaugural Salone del Mobile SaloneSatellite in April 1998 (a springboard for young design talent), Crasset’s design prowess has evolved over the years. 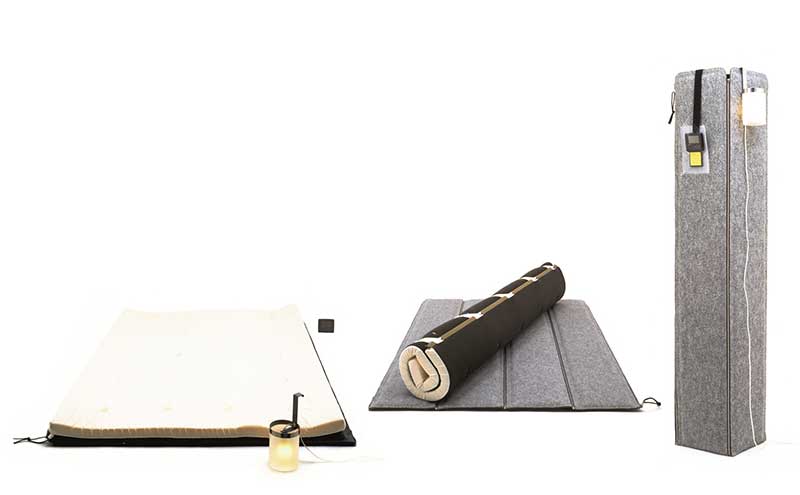 With the SaloneSatellite celebrating its 18th birthday this year, it remains an ongoing platform for discovering talented young designers and driving their career development forward. A recent SaloneSatellite press release listed a number of designers who previously exhibited at the show and have since gone on to achieve international acclaim. Matali Crasset is one of those designers. With this in mind, ArchiExpo put several questions to her:

ArchiExpo e-Magazine: Reflecting back, what aspects of debuting at the SaloneSatellite were most important to you?

MC:I debuted at the inaugural SaloneSatellite in April 1998 with my first furniture project, “Quand Jim monte à Paris” (“When Jim Comes to Paris”). Passionate about electronics, I was quite reluctant at that time to think about ​​creating furniture. Research for this project was developed in parallel to my activity at Tim Thom, the integrated design center at Thomson Multimedia.

Shape is not my first concern. Rather my furniture is based on new typologies and non-features, as well as new attitudes toward the use of furniture. While our “closet” has changed, for many of us, our furniture is still that of our grandparents. The issues that interest me are: How to rethink the habitat. How to inject hospitality and generosity into our environment. How to think about small spaces.

I decided to create a range of objects that were specifically crafted for the needs of my real or imagined friends. I wanted to propose an alternative to the sofa. For me, the sofa is an impossible idea because it often sorely lacks in generosity. I thus wanted to offer “Jim” an object for himself, not simply an object that would be transformed [such as a sofa] when he visits Paris. “Jim” is my response to the cramped spaces of Parisian apartments, for accommodating a friend in the best conditions when you don’t have a spare bedroom.

ArchiExpo e-Magazine: Following that first SaloneSatellite show, what changed for you, for example, in terms of mindset, design inspiration, direction of travel?

MC: I stayed all week in Milan [in 1998] with Bruno Domeau and Philippe Peres [both master craftsmen]. It was a very uplifting experience. “Jim” was published widely in the press and I saw people reacting positively to the concept. Moreover, “Jim” is not merely a banal extra bed, but also includes a lamp and an alarm clock. It’s a hospitality column, an obvious term that is very dear to me.

Through presenting that first prototype of “Quand Jim monte à Paris,” we got enough orders from Italy, Germany, Portugal and the United States to launch initial production. Requests for exhibitions then followed. My first was held in June 1998 in the Berlin shop of Inez Franksen, a strong advocate of Dieter Rams. Then in Paris, at Colette, we presented a second version of “Jim” with a new exterior and a range of vivid colors.

ArchiExpo e-Magazine: When a promising young designer asks you for a few words of advice, how do you respond?

MC: I would encourage the person to develop an independent approach, to invent a personal way of working and to be curious. It seems to me that today’s challenges are significant, but also interesting, given the digital formats now available to us.

ArchiExpo e-Magazine: Your views on design embody such key principles as simplicity, purity and integrity. As a designer, how do your experiences and values inform your ideas on experimentation, theory and the ways in which you question design?

MC: I’m happy to be able to work with great freedom on a diversity of projects that have varied scales and requirements. For example, projects for IKEA or Danese, working on a school or “bibliothèque”. This year I will complete two architectural projects: the renovation of the city library and a school in Geneva, and a project in Trébédan that is a part of the Fondation de France [a French entity which stimulates private philanthropy, among other activities].

I’m growing this business through the projects I head, like a midwife. I’m less concerned about shaping materials and aesthetics, and would rather see how things emerge and unite, organizing around intentions and values, relationships and skills.

The majority of the projects that I’m currently working on highlight the dimension of collectiveness and collaboration, for example, the recent La Maison des Petits at the CENTQUATRE-Paris or Dar’HI at Nefta. There is a state of increasing localism that interests me very much. It’s becoming clear that contemporaneity is no longer the exclusive preserve of the urban world.

With her trademark high bob haircut, French designer Matali Crasset’s countenance is both idiosyncratic and wonderfully quirky. Yet appearance is only one aspect of self and Crasset encourages us to question how we approach our daily being with a sense of fervor and intrigue. Similarly, Crasset has an inquisitive approach to design, concerning herself less with the aesthetic and more with inquiry, experimentation and environment.

Graduating in 1991 from the École Nationale Supérieure de Création Industrielle in Paris, Crasset worked for Italian designer Denis Santachiara in Milan (a designer for whom she has the utmost respect). In 1993 she returned to Paris where she worked for the revered Philippe Starck, both at his studio and at the Thomson Multimedia electronics group, where Starck was artistic director.

The first project that would define Crasset’s design point of view and process was “Quand Jim monte à Paris” (“When Jim Comes to Paris”), her ‘hospitality column’ manufactured by Domeau & Pérès. In 1998 she opened her own Paris-based studio—Matali Crasset Productions—and has since worked across a range of design disciplines (product design, materials, architecture and interiors), always with an experimental and curious bent. Crasset believes in both generosity and sharing within design, ensuring her projects manifest such traits.