Home » On the Market: Latest Version of the World’s First Robotic Kitchen with Luxury or Modern Options

On the Market: Latest Version of the World’s First Robotic Kitchen with Luxury or Modern Options 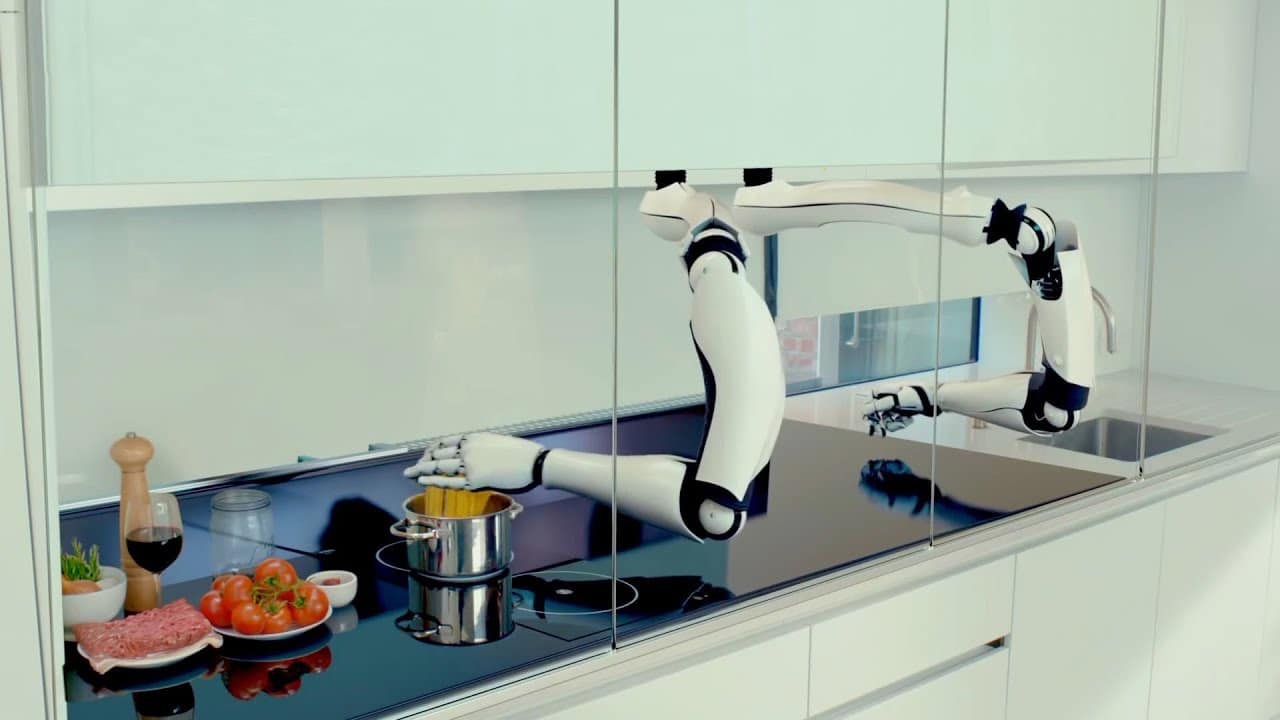 Five years after the initial launch of the world’s first robotic kitchen, Moley Robotics worked with its partners to create and test a newer version of the robotic chef. As it is now integrated into a fitted kitchen complete with a smart fridge, storage and cupboards, the robot can be tucked away, out of sight, while the kitchen is used by the customer.

In 2015, Moley Robotics launched its proof-of-concept prototype whose design has since gone through a rigorous R&D program to ensure its reliability and readiness for the market. Mark Oleynik, CEO and founder of Moley Robotics, showcased the robot’s updated design during an online launch presentation on December 6, 2020.

The robot is now an integrated part of the kitchen whose layout incorporates a smart fridge, storage and cupboards; all interconnected via sensors and optical cameras. This updated version of the robot allows it to hide within the cupboards and storage space of the kitchen. Customers can keep the robot out of sight and out of the way whenever they wish to cook in the traditional way.

Readily available and on the market, the company received 1205 qualified sales inquiries prior to the launch. The price of the Moley Robotic kitchen depends on the specifications of the installation; the kitchen itself is referred to as being equivalent to a conventional luxury kitchen as it is the product of six years of research and development by an international team of 100 engineers, product and luxury interior designers and three award-winning chefs.

In 2021, we can expect a commercial version of the Moley kitchen to be released. The team of engineers at Moley is developing integrated robots for busy kitchens such as those in restaurants. The robots will need to be reliable with precise accuracy while being able to serve up multiple portions of freshly cooked cuisine.

“What you are looking at here is the world’s first consumer robotic kitchen,” said Mark Oleynik, Moley Robotics founder and CEO, in a press release. “Our luxury fully automated smart kitchen is now on sale, and like all breakthrough technologies – cars, televisions and computers  – it will appeal to enthusiasts, professionals and early adopters, and is priced accordingly. We anticipate that our pricing will be reduced significantly over time with production volume, efficiencies and economies of scale, whilst simultaneously enhancing additional functionalities of the product.”

The technology dates to before the robot’s first appearance but as a reminder, the Moley Kitchen functions via sensors and optical cameras used to map ingredients, cookware and utensils within the kitchen. Subtle markers on handles and pan lids help the robot orientate the stainless-steel pots, pans, and utensils. The robot’s optical system can even spot dropped food and clean up before and after cooking. An integrated UV lamp ensures the cooking area is kept germ free.

At the heart of the new technology are two robotic arms featuring fully-articulated  ‘hands’, developed in collaboration with world-leading German robotic company SCHUNK, Moley’s exclusive hand partner. The product of 11 exhaustive development cycles reliably reproduces the movements of human hands. This means the robot kitchen can retrieve ingredients from the smart fridge, adjust hob temperature, use the sink to fill pans and pour, mix and plate up just as a human cook would. The robot even cleans up after itself – without complaint!

The Moley Robotics system does not cook like a machine – it captures human skills in motion. Tim Anderson, culinary innovator and winner of the prestigious BBC Master Chef competition (2011) played an integral role in the kitchen’s development, with his cooking techniques 3-D recorded then translated into elegant digital movement using algorithms.