Courtesy of the author.

This article was written and submitted by Juan Mario García Arroyo, a building engineer since 1968 and the Construction Manager of the Sports Palace of La Coruña. This article has not been modified from its original translation in any way. All images were supplied by the author.

On August 2, 2020, the fiftieth anniversary of the inauguration of the Sports Palace of A Coruña was celebrated.

I am writing this article in order to contribute to the recognition of this Sports Palace as a work of a category so remarkable as to be compared with the most important works of architectural engineering of its kind that exist in the world.

The author of the preliminary project, Don Santiago Rey Pedreira (1902-1977) is inspired by the Raleigh Pavilion (USA) that was born, actually, in 1948 as a commission to the studio of William Henley Deitrick of the manager of the State Fair of North Carolina JS Dorton of a new building “that would represent a modern facility showing the progress and development of the state, without employing references to similar buildings previously constructed.” (1)

William Henley Deitrick had a collaborating architect, Maciej Nowicki (1910-1950), of Polish origin, who had a new conception to solve the problem of covering large spaces with hanging roofs.

Nowicki had conceived this design for the State Fair, today Dorton Arena:

Frei Otto (1925-2015) is known worldwide for his works and for his book “Hanging Covers”. This can lead us to the mistake that Frei Otto developed this project. It was not so. Frei Otto came across this design on a trip to the US in 1950, where he visited Deitrick’s studio and met his engineers Severaud, Elstad and Kreuger. This served as the basis for developing his book, his doctoral thesis and some subsequent projects.

Nowicki’s death in a plane crash, in 1950, prevented Frei Otto from meeting Nowicki and from developing the design he had started.

It was later the engineers Severaud, Elstad and Kreuger who carried it out.

Rey Pedreira relies on this idea, providing some variations that, from my point of view, give greater beauty to the entire building. On this he says:

“In Raleigh, the two parabolic arches that intersect and suspend the cable network are supported by pillars. At the Riazor Sports Palace, they gravitate to the ends of reinforced concrete corbels, concurring at their two intersection vertices with the vertices of the buttress walls that oppose the thrusts.” (2)

It is actually 32 corbels of 18 meters in length and of different heights, depending on the height through which the parabolic arches run in their journey from vertex to vertex of the buttress walls that balance their thrust.

But it is not just a question of corbels but, to take advantage of the formation of the stands, Rey Pedreira designs some “forms” that will allow him to support the stands and provide accommodation for the different services that the Sports Palace of A Coruña will have available for its daily operation.

These forms are endowed with great slenderness so that both the interior and exterior have an extraordinary beauty not common in buildings dedicated to these uses.

The shapes have a thickness of 50 cm.

At Intecsa, Dragados Technical Office, under my supervision, as future Site Manager, the project is being developed in which two architects and twenty draftsmen participate. José Antonio López-Jamar, Civil Engineer, a great specialist in structures, directs the calculations of the structure and the cable network that configures the roof forming a hyperbolic paraboloid. It is a “heavy hanging cover”. Due to the uniqueness of the structure and especially the roof, the Eduardo Torroja Institute actively participates.

Given the originality of the shapes, it is obvious that the layout of the foundation footings involved great difficulty, considering that it had to start from the meeting point of the shape with its corresponding parabolic arch. 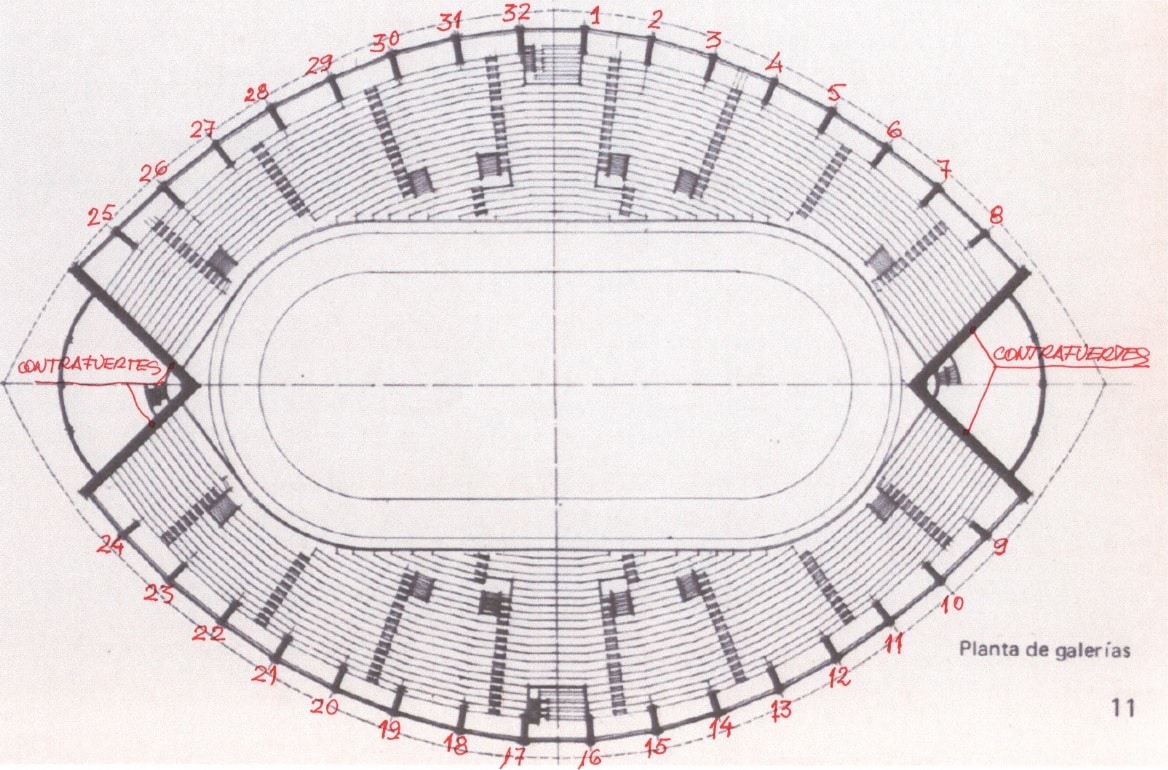 “The ends of the corbels and the upper vertices of the extreme dihedrals support two large arches of a second-degree parabolic axis line, with their median planes forming and horizontal dihedral and slopes of about 24º; This arch has a rectangular section of 2.50 x 0.30 m, slightly reinforced and with an almost axial prestress. ” (3)

“This deck is made up of a slab of precast Ytong cellular lightweight concrete slabs, supported by a mesh of 0.5, 0.6, 0.7-inch cables, orthogonal (in plan), anchored in the two rope arches by means of CCI anchors. This mesh is tightened by tensioning the longitudinal cables, leaving the alternating crosses linked by special double anchors, and the entire mesh assembly embedded by the mortar to fill the voids left by the plates. A small layer of regularization mortar and a Novanol-type waterproofing insulation are spread over this slab.” (3)

Until now we have not talked about the dimensions of the Sports Palace:

“The municipal sports pavilion of La Coruña has an oblong plan between the parabolic contours, 112 by 72 m in the projection of roofs.” (3)

It really is about important dimensions. If we remember the measures of the central roof 73.60 by 38 m, it is clear that it is a unique building that has not been sufficiently recognized.

Everything was studied in detail and, from the beginning and with the perspective of 50 years of use, it can be ensured that all the positive characteristics of public circulation, visibility, acoustics, natural and artificial lighting, ventilation, etc. are met.

Juan Mario García Arroyo was born in Madrid (Spain) in September 1943. He has 54 years of experience as a surveyor, installer and trainer of plumbing, sanitation and heating installations. He carried out the work of the Construction Manager of the Sports Palace of La Coruña.