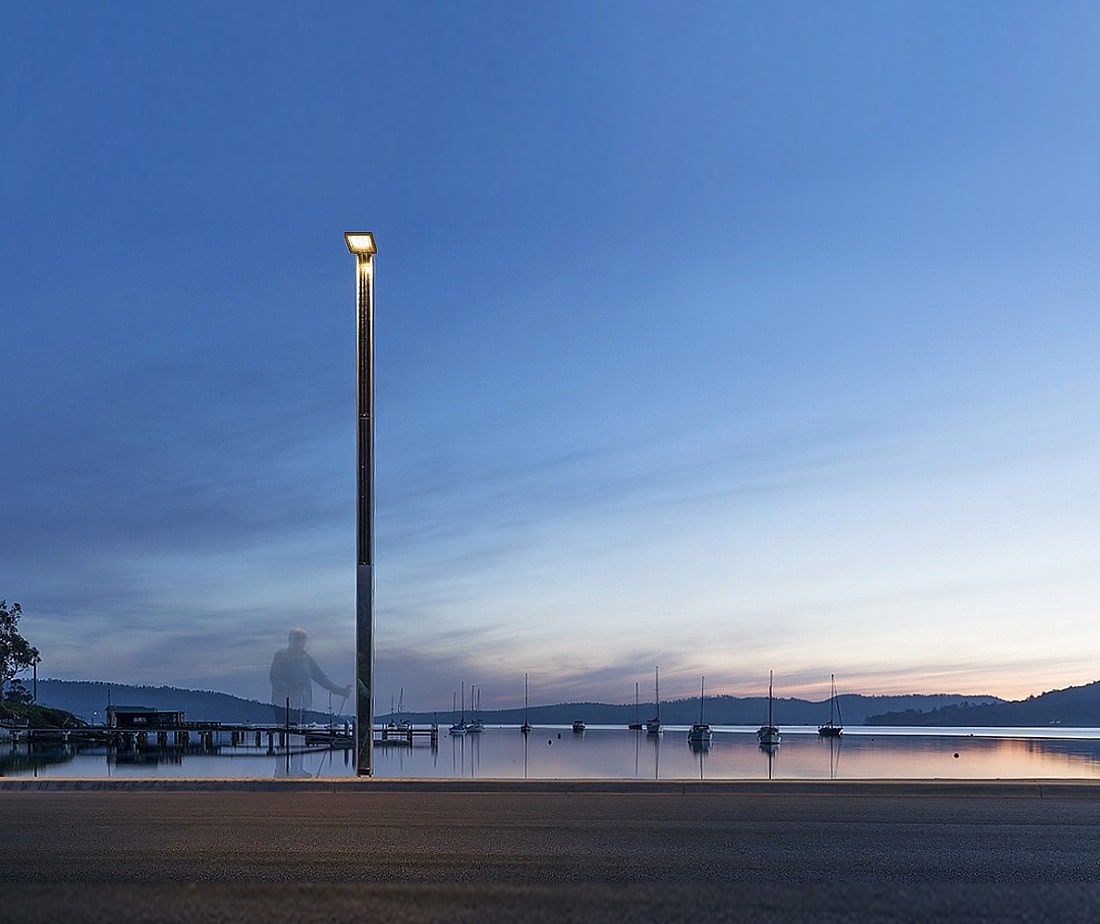 “We designed the lighting to accentuate the architectural qualities and to add a new dimension during the dark hours.”

The pair collaborated closely with landscape architects Acme Architects. “We took part in the lighting design project from start to finish, including several trips to Oman to secure the quality of the installations and to finetune more than 300 light fixtures on the site,” said Borello. 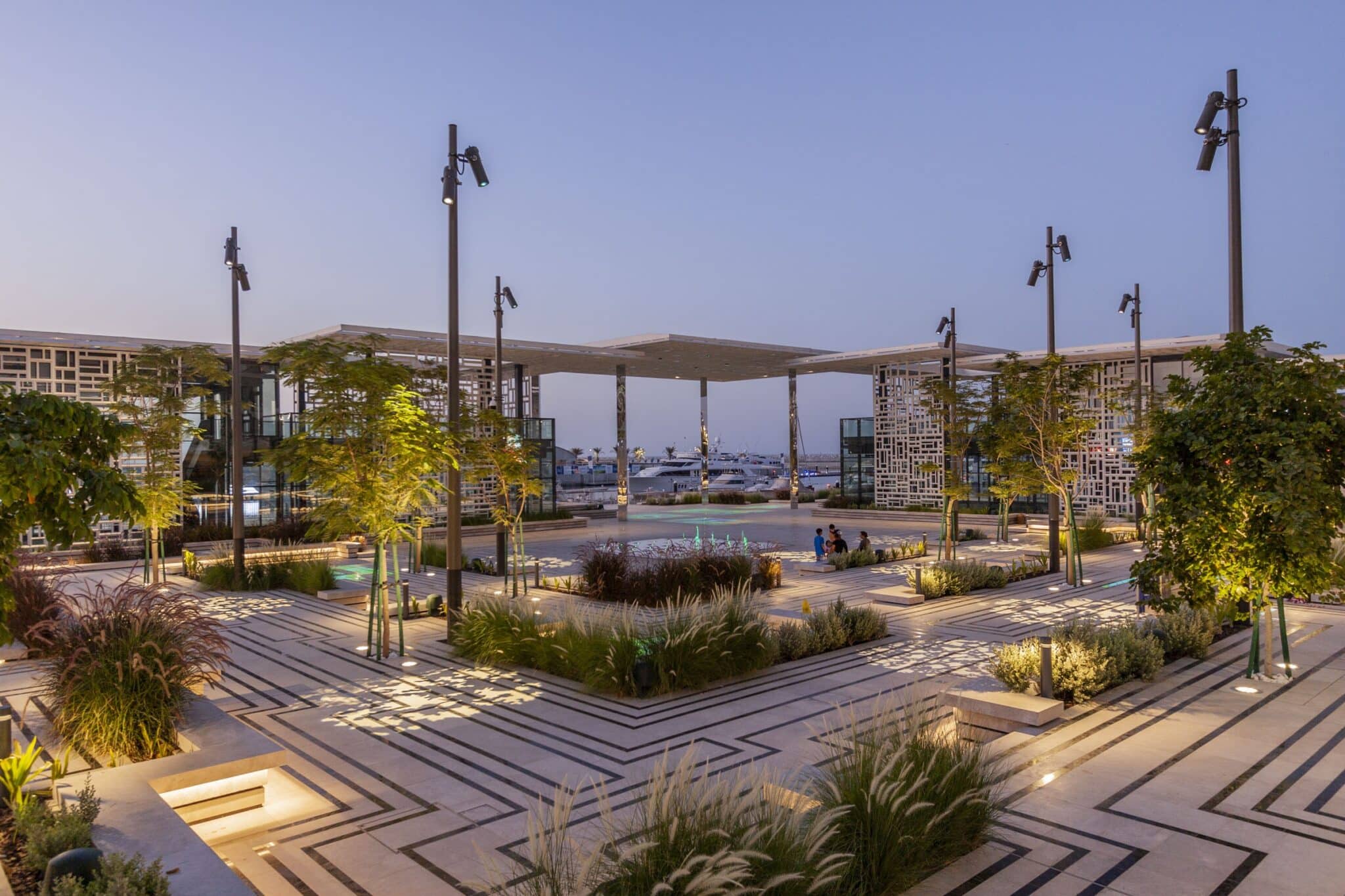 “The primary design goal was to create lighting for people. The lighting creates a diverse environment where visitors feel safe, comfortable and inspired,” said Møjen.

In order to achieve this, they created several lighting layers.

In architect Peter Van Driessche’s INFINITI²³ tower, built for the Bruges Triennial held from May 5 to September 16, 2018, lighting helped to accentuate the tower’s form and the message about rising water levels due to global warming. The tower was composed of container-shaped quarters that could detach and function as independent units on the water. 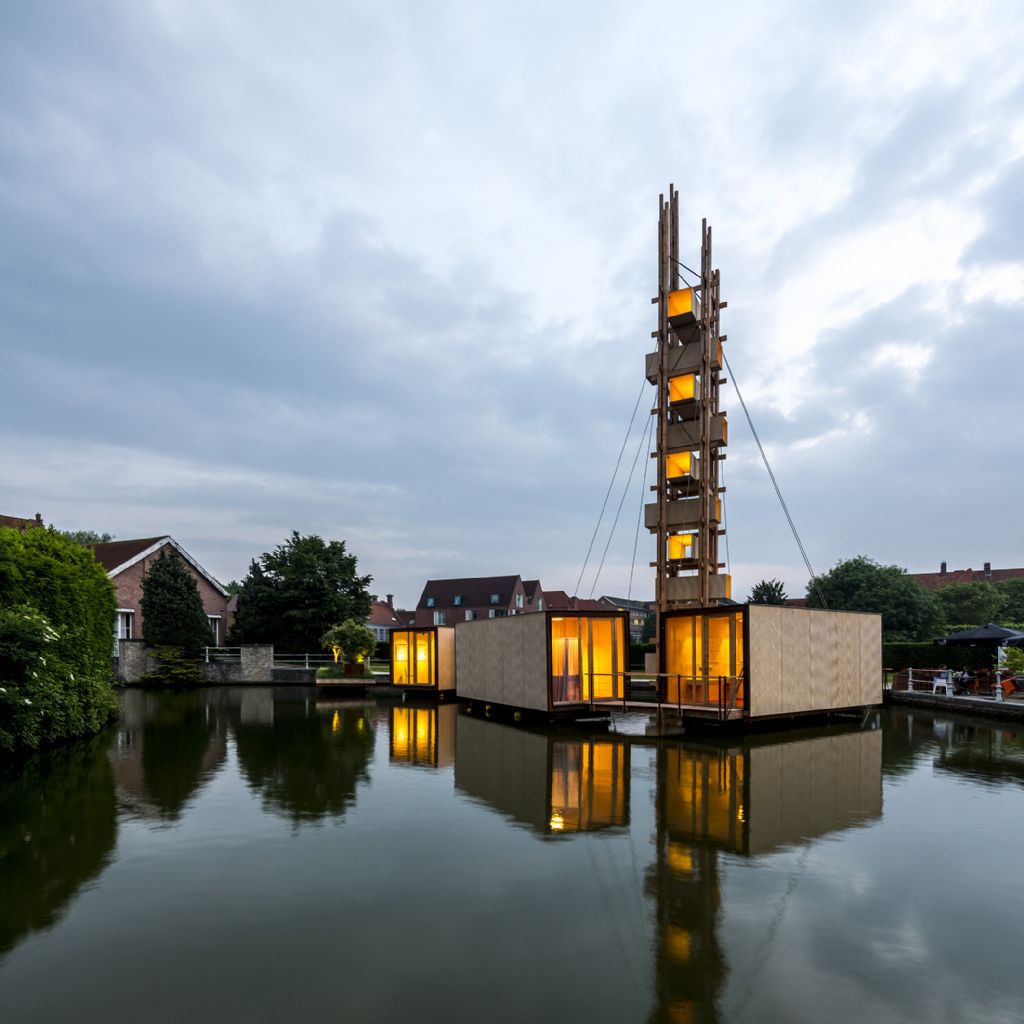 Delta Light was responsible for lighting each container, including those placed on the water’s surface. According to Geert Christiaens, Belux Area Manager at Delta Light in a press release:

“We designed thin LED sections so the color temperature changes according to the height of the capsule: the bottom containers have a whiter color light, cooler than those at the top where the color of the light is much hotter. Thanks to our CTRL DELTA system, we can change colors at any time via Bluetooth. The more the earth heats up and the sea level rises, the warmer the lighting becomes.”

London’s Alexandra Palace, built in 1873, is currently undergoing major restoration and lighting plays a role in bringing derelict sections of the palace to life. Architainment worked with Signify, formerly Philips, to light up its mast and tower. The lighting demonstrates the scale of the structure while allowing light changes for different events.

“Thanks to new Color Kinetics technology, the project was completed at only a third of the original budget.”

Architainment used the most updated Philips Color Kinetics LED fixtures to light the mast. Each fixture is DMX controlled allowing it to function independently or as part of a group. The age of the palace posed limitations on where fixtures could be mounted. The designers were able to avoid mounting luminaires on the mast itself by placing Color Kinetics Color Reach RBGW fittings at the base of the structure. The base of the mast is lit internally as well, shining light upwards through the tower’s latticework, while the upper part of the mast is lit externally allowing the upper and lower parts to be controlled separately which creates light uniformity. Thanks to new Color Kinetics technology, the project was completed at only a third of the original budget.

The historic center of Jaipur, India, also known as the “Pink City” due to the color of many prominent buildings, recently underwent a lighting makeover by Osram Lighting Solutions. Osram worked to highlight the unique architecture of the city while giving it new life when the sun goes down. The light design links cultural heritage with modern architecture. A total of 6,600 Osram LED luminaires light up a 6 km stretch which features 425 monuments. The project necessitated 30 different luminaires, 15 beam angles and eight color temperatures to achieve its design goal.

“For billions of years, all life has relied on Earth’s predictable rhythm of day and night. It’s encoded in the DNA of all plants and animals. Humans have radically disrupted this cycle by lighting up the night.”

When the coastal Kingborough municipality in Tasmania added lighting at the end of last year to improve visibility for pedestrians and large boats, it was fitting that this home to several parklands follows IDA criteria.

Southern Lighting was responsible for adding the 12 new solar-powered poles and luminaires.

“It was a collaboration between Valen Energy out of Texas, who brought the solar expertise, and WE-EF Lighting Australia who brought the lighting intelligence to the table.”

The VFL530 solar powered lights from WE-EF are completely independent from the electrical grid and generate enough electricity to run for five days with no sunlight. The luminaries draw only 9 watts of power and comply with the IDA’s standards.