Photographing Secret Messages in the Silent Streets of NYC During Lockdown

Photo Details & Credits: Washington Square Park, March 31, 2020, 7:10 p.m. While reviewing images back in his studio, Seliger saw, for the first time, the inscription on the park’s arch. “Let us raise a standard to which the wise and the honest can repair. The event is in the hand of God. —Washington.”

Ever think we’d see the city that never sleeps in a moment of rest? Photographer Mark Seliger and editor Mary Alice Miller discussed Seliger’s photographs of New York City under lockdown during an online conversation. Here are the highlights of the zoom chat they had, hosted by ASP.

27 May 2020—The Annenberg Space for Photography held a zoom webinar session, the second of four episodes of virtual conversations between lauded Vanity Fair photographers and the publication’s current and former editors.

Casual Conversations: The Vanity Fair Talks is halfway through its month run with only two sessions remaining. Each session is organized so that the speakers discuss iconic imagery that accompanied the magazine’s investigative reportage and signature wit.

As the editor of the New York portfolio, Mary Alice Miller led Mark Seliger in the discussion about his decades of work for the publication and the recent portfolio they worked on together of Seliger’s photographs of his native New York City under lockdown.

Sharing a Historical Moment that Lasts

Known for his striking portraiture, Mark Seliger has captured the world’s most talented actors, filmmakers, and musicians at the height of their careers or on their way to becoming celebrated.

In the planning stages, he said he makes a list of ideas to better understand where to start off. He sketches his ideas, creating pieces of art, and turns them into photographs when possible. There’s a lot done during prep, he said, and the more the photographer interacts with his or her team, the better the result will be.

“It’s like creating a landscape for a creative or art director to build a story related to the contents of the magazine,” he said in regards to his sketch art. “But it’s mostly about having a great location and enough space. Knowing what you want and knowing when to leave. Nothing’s worse than dragging out an interview that could be done in ten minutes.”

It’s also about creating a relationship with one’s subject, getting up close and personal as Seliger has done with so many of his subjects including Chris Pratt whose in-the-water very up-close shot made the front cover of Vanity Fair. 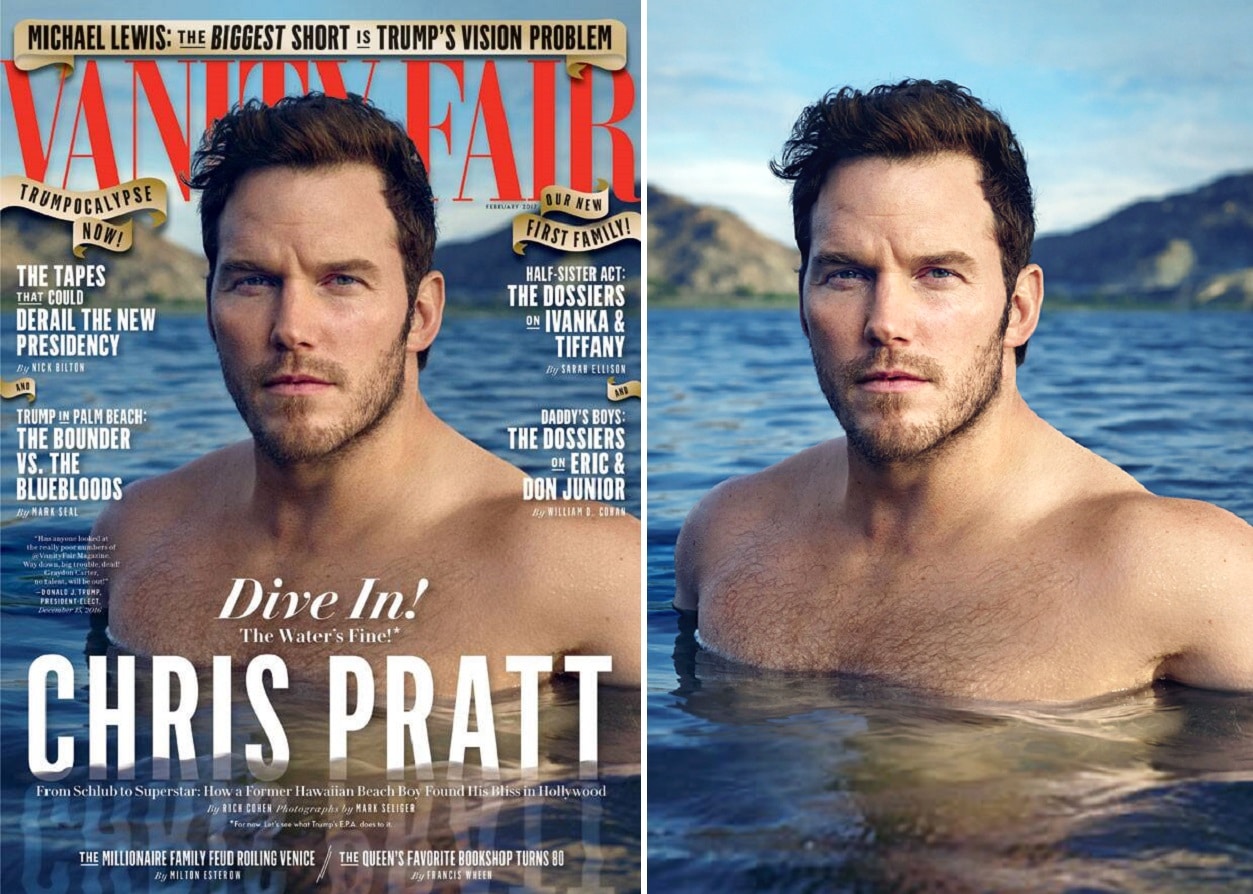 “Getting up close and personal with subjects.” A portrait of Chris Pratt taken by Mark Seliger. Courtesy of Vanity Fair.

“You fall in love with your subject even if they’re a villain—drug lords, politicians who’ve gone up in smoke—because you come in [to the project] with an objective point of view. “ 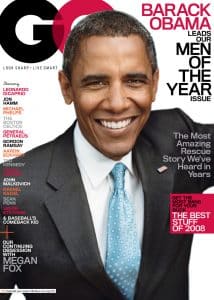 Seliger has had the opportunity to photograph his own personal icons as well, such as Willie Nelson from Stardust.

“If you’d have asked me a long time ago whether I’d ever have thought I’d get the chance to ask Willie Nelson to take his shirt off, I’d have said no way.”

But dreams do come true, and Seliger has accumulated many pinch-me moments over time.

“Once it happens it’s unreal. You have to keep pinching yourself. I was in the right place at the right time. In the beginning, I’d work for anything, I even used to work for food.”

Then he became Chief Photographer at Rolling Stone magazine and things went from there. Subject after subject, established and upcoming actors, well-known politicians like Senator Barack Obama who later became the President of the United States; the humble Seliger who believes it will all come to a crashing halt has much to brag about but only speaks about his work in such a poetic way.

“You get to have a moment of their history which will always be a part of yours, and maybe it won’t mean anything to you as the photographer when it’s happening, but they will look back at those images and recall that time in their life. It’s about that beautiful moment.”

During the pandemic, Seliger has traded the studio and staged settings for the empty streets of New York to document the city he calls home as its inhabitants quarantine inside. In the series Silence in the Streets: Dispatches from New York City Under Lockdown, published in Vanity Fair’s June 2020 issue, Seliger paints a different kind of portrait—one of an urban jungle stagnant in stillness, a once-roaring city in repose. Seliger spoke with Mary Alice Miller about the stories behind this indelible imagery.

“New York City is like a character,” said Mary Alice Miller, “and we can see how your relationship with the city has evolved over time.”

Seliger has had many occasions to photograph subjects in the city that never sleeps, but it was during lockdown when, as he walked the empty streets, that he came upon something remarkable.

“It was a celebration that there wasn’t any traffic, any distraction, instead we could see the beauty of the city itself where the streets took on this 3D quality. There was no irritation and each corner was like the movie set.”

Seeing the city in this way inspired Seliger to begin his NYC series and he began shooting around the city. It wasn’t until he developed his photographs in the darkroom that he began to notice words and sentences he hadn’t noticed when shooting.

Photo Details & Credits: Washington Square Park, March 31, 2020, 7:10 p.m.
While reviewing images back in his studio, Seliger saw, for the first time, the inscription on the park’s arch. “Let us raise a standard to which the wise and the honest can repair. The event is in the hand of God. —Washington.”

In the photograph he took of Washington Square Park, he saw the arch contains an inscription, a quote by George Washington, that he saw and read for the first time:  Let us raise a standard to which the wise and the honest can repair. The event is in the hand of God.

“The inscription really impacted me. It made so much sense.”

In another photograph, one he took of the HOPE sculpture, a second word in the image brought new meaning. We can see a sign with the word “Chase” at the top left and, in the center, the letters that spell HOPE, reading “Chase HOPE”. A fitting message for a time when citizens of the city of NYC and around the world sit in worry.

“It’s like there are secret messages within the series,” said Mary Alice Miller.

Seliger wanted to figure out a way down to Bellevue. He wasn’t interested in surrounding himself with sadness, but what he found was rather sad indeed.

“Alongside my assistant, we drove over the FDR, back and forth, trying to figure out how we could get down to Bellevue. There was hardly any traffic at sunrise, so I jumped out of the car on the FDR and shot this image.”

A line of windows of the hospital, a line of trees at the foot of the building and a line of trucks in the parking lot below the trees—morgue refrigerator trucks. 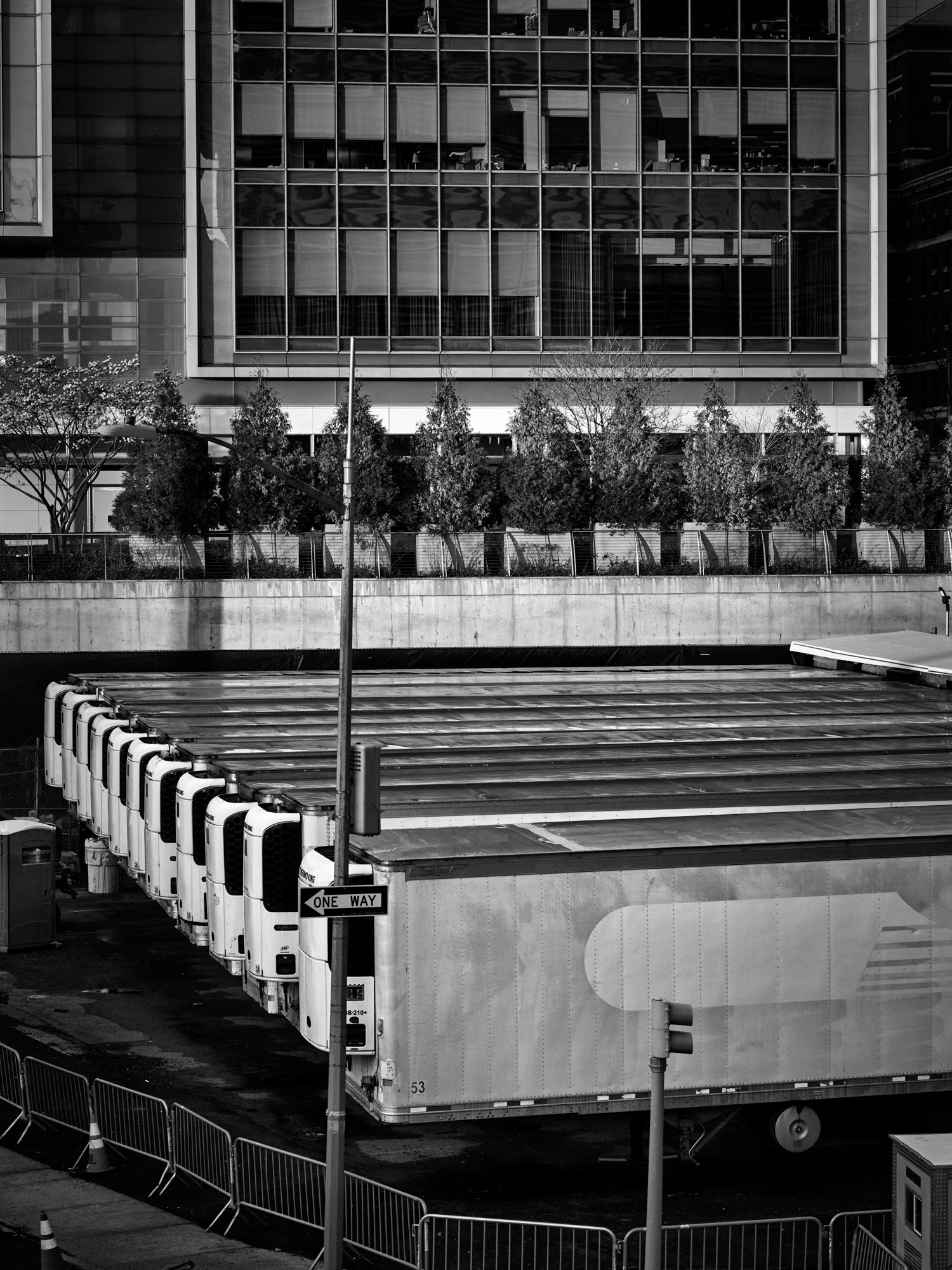 NYC Health + Hospitals/Bellevue, April 14, 2020, 6:33am
From a small emergency lane on the FDR Drive, Seliger photographed the refrigerated trucks that are serving as Bellevue hospital’s temporary morgue. The angle created “a symbolic crest,” he says, “beneath the building, under the tree line, the trucks are like a burial ground.”

The conversation coincides with the launch of Seliger’s charity auction at Christie’s, where 100% of the proceeds will go to various COVID-related organizations.