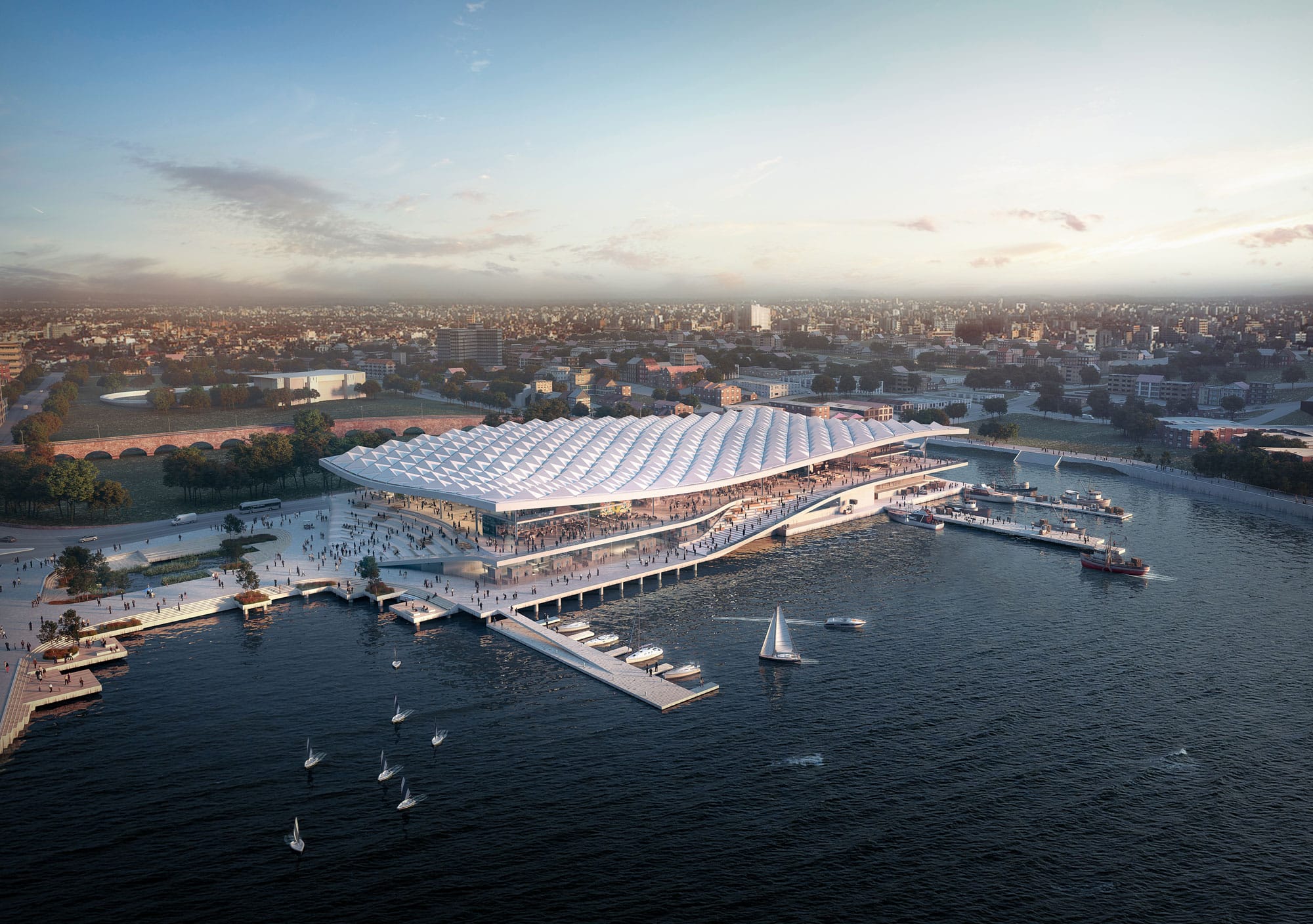 Fish markets don’t often conjure up images of accessible, cutting edge architecture. But the groundbreaking design for the new Sydney Fish Market, the brainchild of Danish atelier 3XN (in partnership with BVN and Aspect Studios), is a stunning reimagination of piscine commerce.

ArchiExpo e-Magazine spoke with Kim Herforth Nielsen, founder, senior partner and creative director at 3XN, about the design, which is set to be realized on Sydney Harbour’s Blackwattle Bay in 2023.

ArchiExpo e-Magazine: What would you say is the most innovative feature of the new market design?

Kim Herforth Nielsen: The sweeping timber-and-aluminum roof is not only an integral aspect of the building’s iconic design but its overall sustainability strategy too. Shaped to respond to the spatial demands of the program below, it harvests rainwater for reuse, protects retail spaces from the sun, and filters daylight. This uniquely shaped canopy uses prevailing winds to extract hot air, protects sellers from southerly winds, and is designed to be as permeable as possible, minimizing the need for conditioned air. 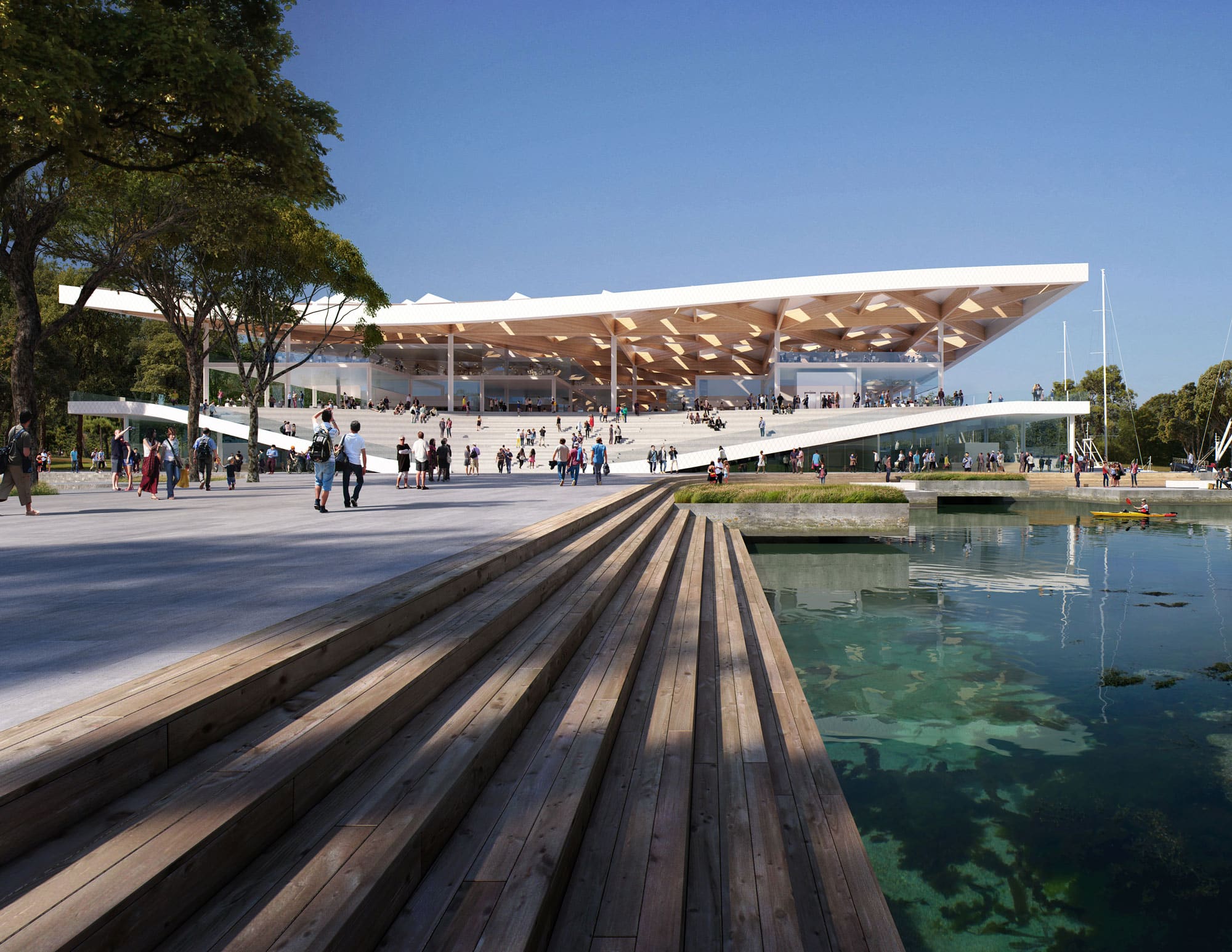 ArchiExpo e-Magazine: Were there any particular design challenges that you had to overcome?

Kim Herforth Nielsen: The existing fish market—the largest of its kind in the Southern Hemisphere—has a conflict of functions. Like many other vibrant, high-profile fish markets across the world, visitors come to get a sense of the behind the scenes activities, but this interrupts daily operations.

The new Sydney Fish Market will facilitate interaction by combining a vast amount of public space with an authentic market. 3XN has physically separated the operational aspects of the market from the public ones, while still allowing visual connections between the two.

ArchiExpo e-Magazine: Can you tell us a little more about how the design enables these connections?

Kim Herforth Nielsen: In the new building, the ground floor hosts all the functions traditionally associated with fish markets – the landing and loading of fish, the wholesale market, and the auction hall. The staircases that lead from the plazas to the upper ground floor, which houses fresh seafood retailers, restaurants and cafes,  are a continuation of the surrounding landscape and act as an invitation for people to enter the market. The stairs also double as seating, creating a public space where people can enjoy their food and views over the bay.

Overall, the market design focuses on maintaining a human scale and creating a true market atmosphere – just like historic marketplaces or bazaars featuring a series of small, connected stalls. Our aim was to create an intimate market atmosphere.

ArchiExpo e-Magazine: Would you say that this design revolutionizes the way fish (and other) markets are conceived and constructed?

Kim Herforth Nielsen: Yes, because of the integration between industry, market and leisure functions. Currently housed in a series of old warehouses and post-industrial buildings, Sydney Fish Market is one of the most significant communities and tourist destinations in the city. 3XN has approached this project with the specific goal of creating a space that is far more than just a place of commerce.