Q&A: A 3D-printed Pyramid in Milan! 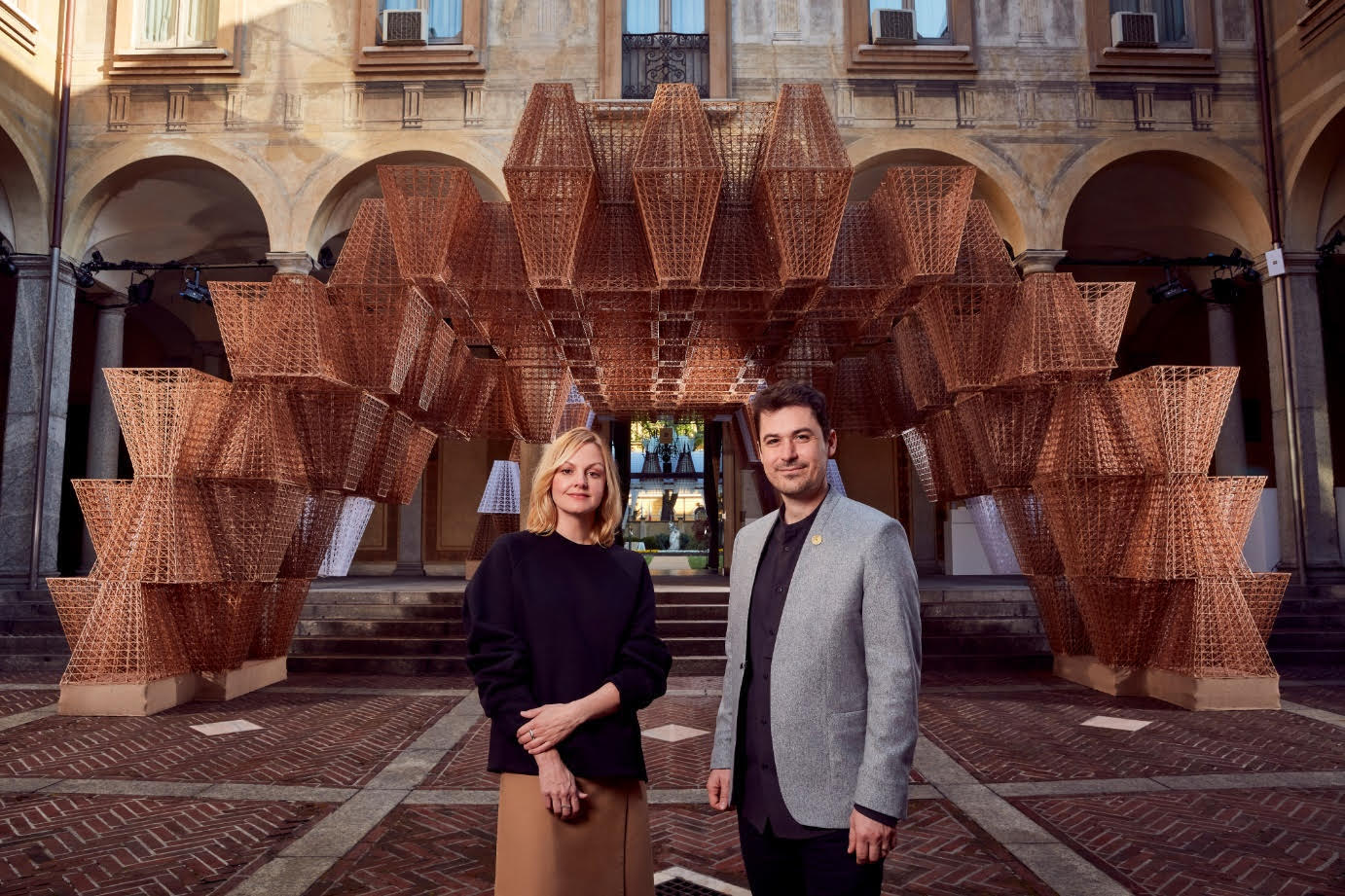 Generally fast plastic, 3D-printing doesn’t have the best reputation in terms of sustainability. However, the magic in this new technology lies in the endless possibilities which, with dedicated bright minds, continue to evolve.

This Salone del Mobile in Milan, in the 16th-century Italian courtyard and gardens of Palazzo Isimbardi, fashion brand COS and architect Arthur Mamou-Mani presented “Conifera,” a 27-meter-long, 11-meter-wide, 6-meter-high 3D-printed pyramid. Notably light at just 1.4 tons, the installation—Cos’s eighth during Milan Design Week—is made of 700 completely compostable bricks in three colors, and is one of the largest 3D-printed ‘bio-plastic’ structures in the world. During the world’s biggest design event, it offered a serene, semi-transparent retreat from the crowds.

Mamou-Mani shared more about the structure with ArchiExpo e-Magazine.

ArchiExpo e-Magazine: What was the design inspiration?

Arthur Mamou-Mani: The main idea is to showcase how renewable materials, coupled with an algorithmic approach and distributed 3D printing, can create the building blocks of the future.

On the other hand we wanted to create a sense of poetic dissolution that echoed the circular nature of the compostable material and create a journey through the palazzo—from the courtyard to the garden, going from architecture to nature.

ArchiExpo e-Magazine: What is the bio-plastic made of?

Arthur Mamou-Mani: This bio-plastic is a renewable, compostable material made from starch, vinegar, and glycerine. We’ve used polylactic acid in different forms—sometimes combined with wood cellulose—which means the material has a carbon footprint 68% less than its petrol-based equivalent.

ArchiExpo e-Magazine: How are the modules manufactured?

Arthur Mamou-Mani: Each piece is produced using 3D printers that run off open-source software called Silkworm, which my practice developed. This tool, updated with learnings from the project, allows innovations to be passed on to others.

It takes four hours to print and two hours to assemble each brick – that’s about 4,200 hours for the entire installation. The installation is digitally designed in code, programmed, and tested at our studio in East London, then sent for printing to three fabricators (or fabLabs) in Milan, Venice, and Macerata, Italy, alongside our studio in London.

ArchiExpo e-Magazine: Structurally, it’s a series of arches. What were you thinking about there?

Arthur Mamou-Mani: We took inspiration from the catenary arches that architect Antoni Gaudí used throughout many of his works. 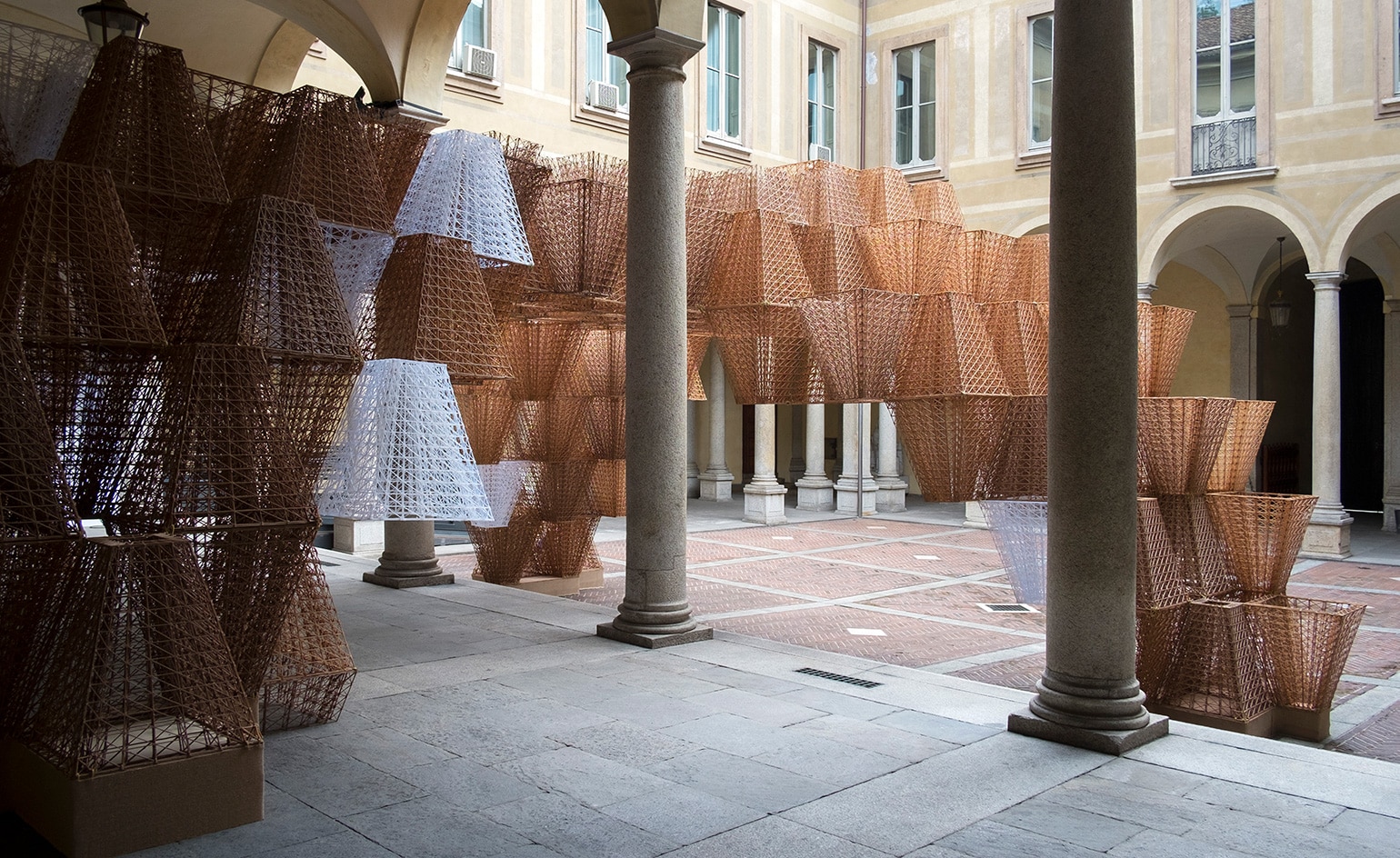 ArchiExpo e-Magazine: How did you choose the bio-brick module’s shape?

Arthur Mamou-Mani: The geometry of each bio-brick comes from a combination of the square motif – which is visible within Palazzo Isimbardi, all the way from the shape of the courtyard to the tiles; the 3D printer’s constraints; and the structural analysis. We wanted an intelligent brick that minimized the amount of materials used and the time to print each facet.

The overall geometry emerges from a grid of truncated pyramids. The grid is dissolved to the minimum that is structurally necessary to achieve a continuous path from the courtyard to the garden.

ArchiExpo e-Magazine: What was the biggest challenge?

Arthur Mamou-Mani: The size of Palazzo Isimbardi – it is large, and we needed to deliver a project with a strong visual impact. The 3D printing process needed to be optimized to build something substantial which would have a presence within the courtyard. Our approach involved designing the printer’s movement directly in the computer. That’s the mathematical challenge: to maximize speed, minimize the amount of material, and discover an assembly process that makes sense. We iterated, started production, continued to iterate, arrived on site, continued to iterate, and so on.

Karin Gustafsson and Arthur Mamou-Mani. Courtesy of COS.

ArchiExpo e-Magazine: How do you see this technology used in the future?

Arthur Mamou-Mani: The project represents a new generation of architecture which vertically integrates design and construction, allowing for creative freedom, material efficiency and sustainability. It delivers a circular approach to design with materials that are renewable and compostable.

In addition, it allows us to use distributed robotic fabrication through local fablabs on giant 3D printers, using a holistic approach to design in which fabrication, structure, material are all part of a digital file.

We were also able to use timber with 3D printing – which might eventually replace conventional methods.

ArchiExpo e-Magazine: What was the mood you were trying to evoke for someone standing inside of the installation?

Arthur Mamou-Mani: I hope people will appreciate “Conifera”’s softness and lightness, and feel at peace. I also hope visitors will begin to understand that the combination of digital fabrication, bio-materials, algorithmic, and modular thinking will open up new opportunities in design and architecture, and potentially in fashion too. Imagine a world where people have access to machines in which they can use materials they would have grown in their kitchen to create furniture, garments, or building blocks.