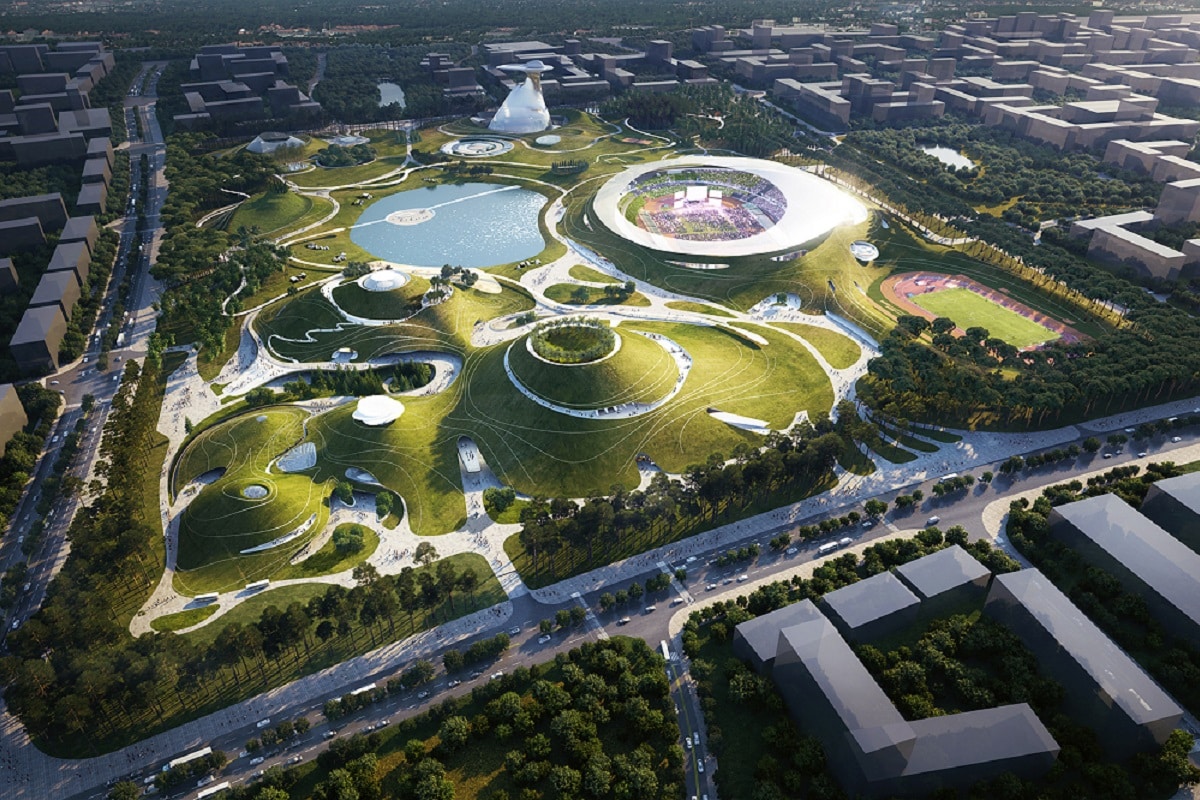 The focal point of the Quzhou Sports Campus has always been to develop an urban space that ties together sports and ecology while integrating the city’s nature-centered culture; but is it really so easy to render the construction of buildings covering an area of 340,000m² eco-friendly?

Constructed in a city where more than 70% of the land is covered with lush forestland, MAD Architects, led by Ma Yansong, designed the ensemble of the campus to match the city’s cultural and philosophical ideas of nature. The rendering shows that most of the tops of the buildings resemble peaks and hills which incorporate platforms or skylights in order to flood the interior with natural light and ventilation. These hills pay homage to the Chinese brush and ink style of painting called shan shui, “mountain water”, and are to be accessible to people who can climb onto them and walk along the trails.

William Wong, Director of MEP and Sustainability design at SC Consultants Limited, spoke with ArchiExpo e-Magazine about how the team integrated eco-friendly concepts into the campus design.

ArchiExpo e-Magazine: Could you explain the main eco-friendly elements of the project?

William Wong: There are four main points that render the project eco-friendly. First, the artificial lake replaces a conventional cooling and heating system, greatly lowering the carbon footprint. Second, the four main facilities are covered by earth which provides not only good thermal mass, stabilizing the temperatures inside, but exhibits the “Sponge City” concept. Third, we carried out a study of the sunlight in order to document how the sun would enter specific buildings. We wanted to avoid having too much sun at certain angles because it would be bothersome for spectators. We aimed at indirect light, not too strong or contrast, but strong enough to rely on for lighting during the day. Equally, as the fourth point, we studied the wind so we could integrate a natural ventilation system.

In 2014, China implemented an urban water management program called Sponge City (SPC). By covering land or buildings with a specific thickness of soil, the green “patch” will absorb fallen water and store it for dryer seasons. The idea is to reduce flooding and water shortage. Read the research paper Case Studies of Sponge City Program in China to learn more.

ArchiExpo e-Magazine: How difficult is it to render such a large project eco-friendly?

William Wong: It is not easy and can almost seem impossible. As you can see, the lake is very large—we had to consider how to avoid flooding, eliminate contamination, etc. Since we planned on covering the buildings with earth, we had to consider landslides. This is why architects and engineers from various departments have to work together: to avoid such disasters. We also had to consider how the buildings would be used, since the occupancy for different events will vary and ensure a maximum or minimum capacity in the system when necessary—heating, cooling, ventilation, lighting. The biggest challenge for us, though, was in regards to the lake and how confident we were to use it as a source of heating and cooling. It’s not like a conventional system. We really had to calculate carefully—i.e. the changing temperature of the water depending on the season. Also, wind speed over the lake plays a role in cooling, increasing or decreasing the evaporation rate, so we needed to calculate this as well. A stronger wind provides a higher cooling capacity, while a lower wind does the opposite.

ArchiExpo e-Magazine: What is the future of urban development?

William Wong: The “Sponge City” concept represents great potential for future urban development. When we pour concrete onto a large section of land, covering earth, we end up with a high risk of flooding. Water ends up overflowing drains or flooding neighborhoods. Using earth like a sponge to soak up and store the fallen water, we’re able to lower the risk of flooding and that’s very important for many cities.

William Wong: I would like to acknowledge MAD architects for their great design concept and CCDI for their support to the architectural and engineering detail design.

“The relationship between man and nature is not only about ecology and sustainability, but it is also about spirit and mood. This is the culture and philosophy that has long existed in the history of this land and needs to be applied in the development of our future cities.” Ma Yansong of MAD Architects stated in a press release.