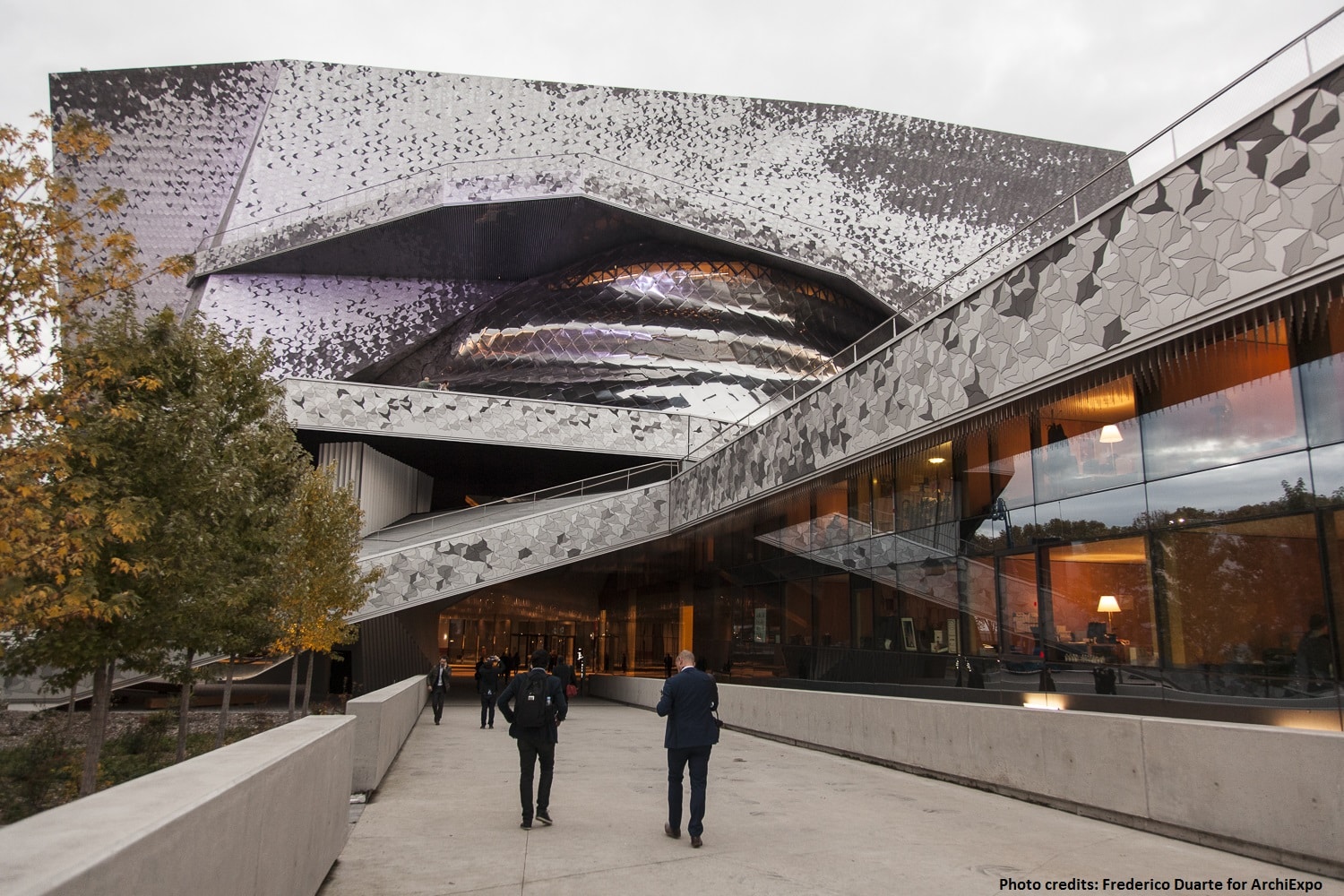 Our Batimat tour bus pulled up near the end of the afternoon November 3, 2015. The Parisian sky, cluttered with clouds of various grays, blended with the façade of our last visit. Deep purple faded to silver, then to black, reflecting the celestial mood.

The shape of a bird, repeated 200,000 times in aluminum sheeting, made up the façade; another 140,000 cover the building’s surrounding, including the promenade. You don’t notice the birds right away because of the sway of colorful shades that harmonize with the building’s environment, but the form of a bird becomes apparent as you get closer. Then the combination of 340,000 birds divided into seven shapes and four shades becomes evident.

Much debate has been taking place in Paris on the estimated and official cost of this building, and who is to blame; despite this unsure and negative vibe, the structure’s quite impressive. Jean Nouvel designed the concert hall with a unique walkable rooftop, not yet opened to the grand public. The promenade runs from the nearby park, surrounds the building and curves up and transforms into the roof.

To fulfill environmental requirements, and why the building earned the NF standard certification awarded for best ecological practices, 1,000 square meters of photovoltaic cells have been installed on the structure’s shell. In terms of water treatment, rainwater is reused to water gardens and greenery, for building maintenance and for public sanitation systems.

The Room that Moves

What really sets the building apart is its main concert hall, what the architects consider a new typology. Architect Brigitte Métra was involved in the design of the main concert hall, described in the press release as “two spaces that fit into each other.”

This concept of envelopment offers an adjustable concert hall, instead of following the “shoebox” style auditorium (like the Musikverein in Vienna) or the “vineyard” style (like the Berlin Philharmonic). “The aim is to be able to adapt the auditorium to different genres of music, while always providing optimal viewing and listening conditions,” she explained.

The tiers behind the stage can accommodate a choir or be filled with spectators; however, the seats are modular and fold back to become “part of the wall.” The seats in the parterre can also be removed for contemporary music concerts where standing is involved. The stage is equally compatible.

Studio DAP used the “box within a box” concept by leaving a space between the walls and succeeded in soundproofing the hall against outside noise. Jean Nouvel worked with Japanese expert Yasuhisa Toyota at Naga Acoustics to design floating balconies that prolong reverberation. Although everything seems chosen for decorative purposes, every element contributes to the acoustics: the cloud-shaped reflectors, the back walls of the balconies and the parterre walls with their small square 3-D yellow blocks. The acoustic program, prepared by Kahle Acoustics, is indeed why the hall “adheres to the poetic yet highly technical notion of a ‘floating auditorium,’” as described during the tour.