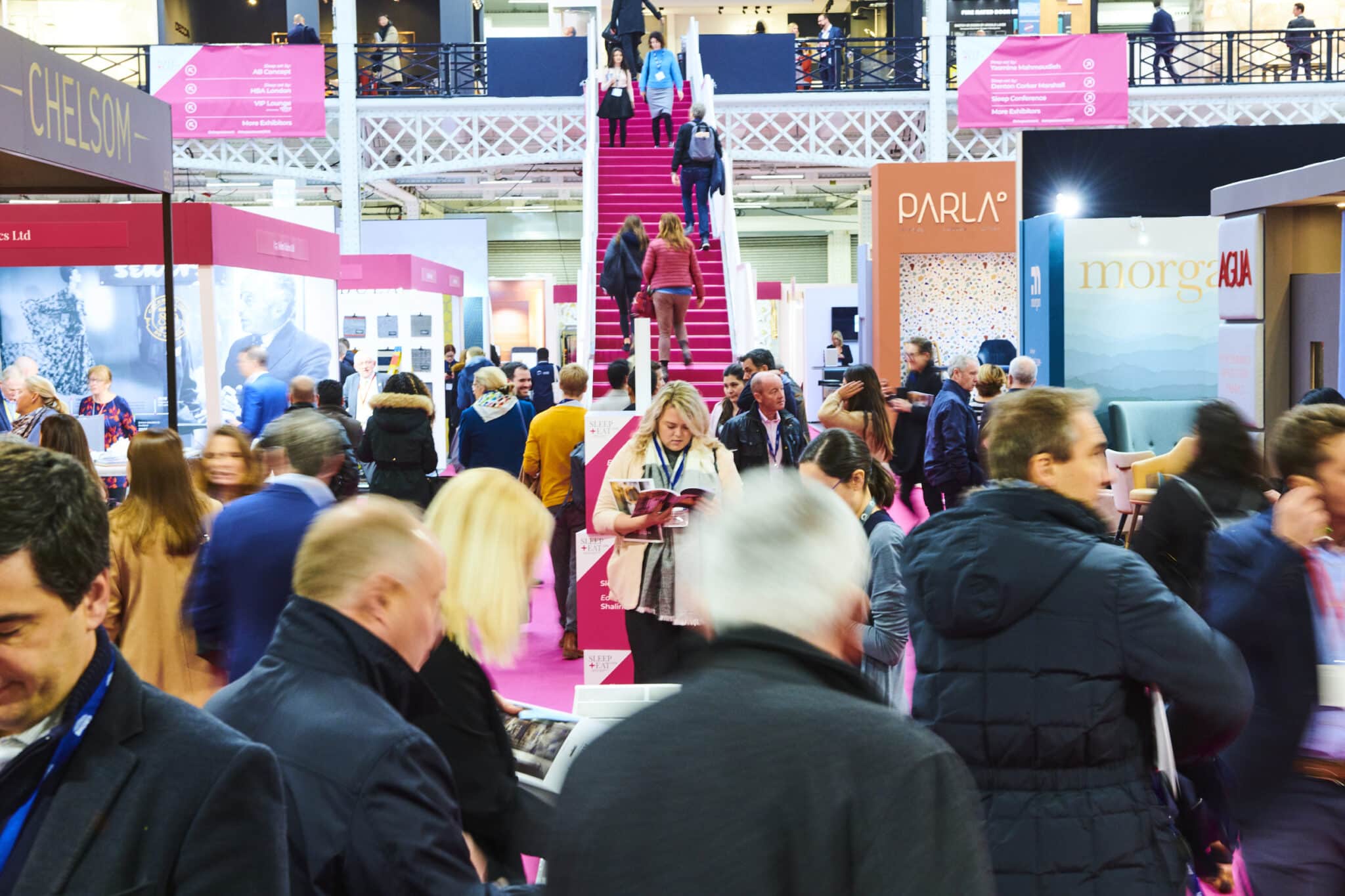 November—The Sleep Set designs for Europe’s leading event Sleep + Eat 2018 succeeded last year’s memorable contest with a new kind of challenge. Instead of running solo, and instead of competing against one another, each of the four design companies partnered with a brand, “unusual suspects” according to the event coordinator, to create their concept rooms. Each guest room design had to be based on the aesthetic and values of the designer’s partner brand.

“This year will undoubtedly be exciting—four international practices, each matched with a much-loved non-hotel brand and challenged to translate the essence of their brand into a guest room,” says Sleep + Eat Brand Director, Mark Gordon.

Since 1965, HBA London has been setting the global standard for luxury, comfort and innovation in hotels. HBA London worked with the Natural History Museum to awaken our inner explorer, to push us to discover the unexpected in the most immediate surroundings. This Sleep Set design encouraged visitors to uncover treasure, examine exciting specimens and crave to learn.

“Our room is for today’s explorers, a space for wandering minds and new insights. We all respond to nature—emotionally, intellectually and physically—and now, more than ever before, hotel guests are seeking experiences that rejuvenate, inform and remind them of natural wonders,” says Constantina Tsoutsikou, Creative Director of HBA London.

Enter the jungle: Tropical Clouded Leopard wallcovering by Timourous Beasties was paired with hanging plants at the Sleep Set by HBA/Hirsch Bedner Associates’ London office in association with the National History Museum, London. The warm brown timber flooring throughout was Misty Duoplank from Hakwood.

With a design base in Melbourne and huge international reach, architecture practice Denton Corker Marshall has its name to the award-winning Manchester Civil Justice Centre and the Museum of Sydney to mention but a few. DCM considered the history and rituals of West Ham Football Club for its Sleep Set design while focusing on the transition between collective and individual space. Angela Dapper of Denton Corker Marshall stated:

“We have extracted the theme to symbolize the layers of history and culture that surround the club. Our concept room is called ‘The 12th Player’ as it represents the idea of looking at the club from the outside in.”

Deep claret lacquered walls and a sunny yellow-lacquered bathroom showcase the teams colors, while a curtained-off bedroom is noticeably lacking a TV—that’s because they’ll be watching the game live. In the bathroom, a Stratos basin is paired with an M-Line Concealed mixer in a striking matt-black—both are from Bagnodesign. The lacquered walls are from Rearo and Formica.

“To belong to West Ham United is to belong to a community deeply entrenched in history and ritual; a group of unique individuals unified in a collective by moments in time. Whether creating new experiences amongst a crowd or alone at a personal level, each is dependent on the individual.” 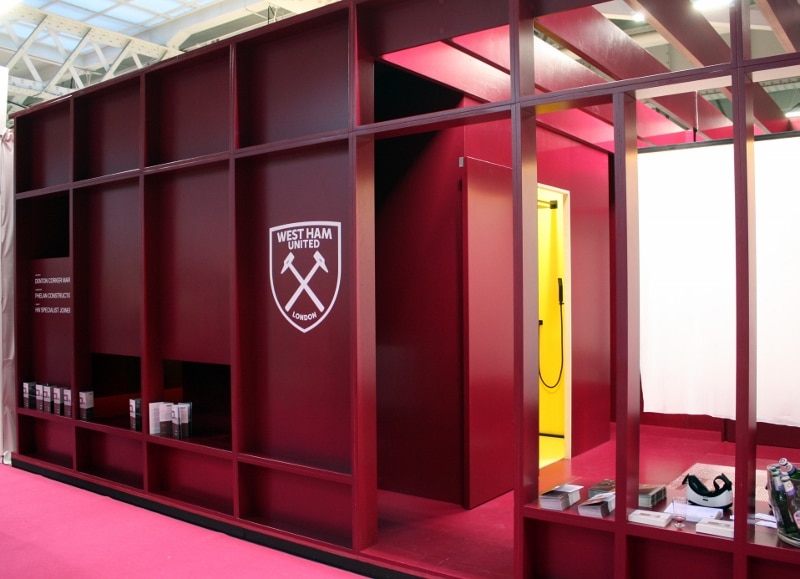 Architect, interior designer and entrepreneur Yasmine Mahmoudieh’s eclectic portfolio has seen her craft everything from the interiors of the airbus a380 to the Massachusetts Museum of contemporary art. Having designed a Sleep Set back in 2013, she was excited to be invited again and to partner with Penguin Modern Classics.

“I feel that having Penguin as a brand partner was the perfect fit for me, as I have always had a huge passion for reading and working with the publishing company leaves a great deal of room for creativity.”

Inspired by literary themes of happiness, love and wisdom that transcend space and time, Yasmine Mahmoudieh has created a narrative for her Sleep Set based on three different Penguin Books from diverse authors from varying points in history: Plato’s The Symposium, Selected Poems of Rumi, and Elizabeth and Her German Garden by Elizabeth Von Arnim. Each area within the room set will take its cue from a book, bringing leitmotifs to life and giving thoughtful visual expression to canonical written material.

The room catered towards the senses with influences on sound, scent and light. Installed behind the walls, a hi-tech Hommbru speaker system released sound in a circular pattern. Inspired by “Elizabeth and Her German Garden,” a novel by Elizabeth von Arnim first published in 1898, the nature-themed bathroom had structural tile from Mosa and a shower experience that included a relaxing light show and chirping birds.

Scattered with glamorous pieces of Tom Ford clothing and inspired by Maison Pierre Hermé’s seasonal collection of pastries Fetish which were found throughout, AB Concept’s concept room was all about indulgence. The brand included unexpected, custom-made furnishings such as a leather swing and a selfie corner, where a curved sofa was accented by flattering lighting.

Design duo Ed Ng and Terence Ngan, co-founders of AB Concept, took inspiration from Fetish, one of the celebrated French patissier- chocolatier Pierre Hermé’s seasonal collections, to develop the sensual and provocative Fetish Suite—a safe haven for guests to indulge in their guilty pleasures. A space of coquettish hide and reveal, and a sense of voyeurism, will be created through the use of frosted and reflective mirrors and secretive spaces, adding to a tantalizing experience as visitors journey through the room. Models of the delicious Maison Pierre pastries even smell like the real thing. 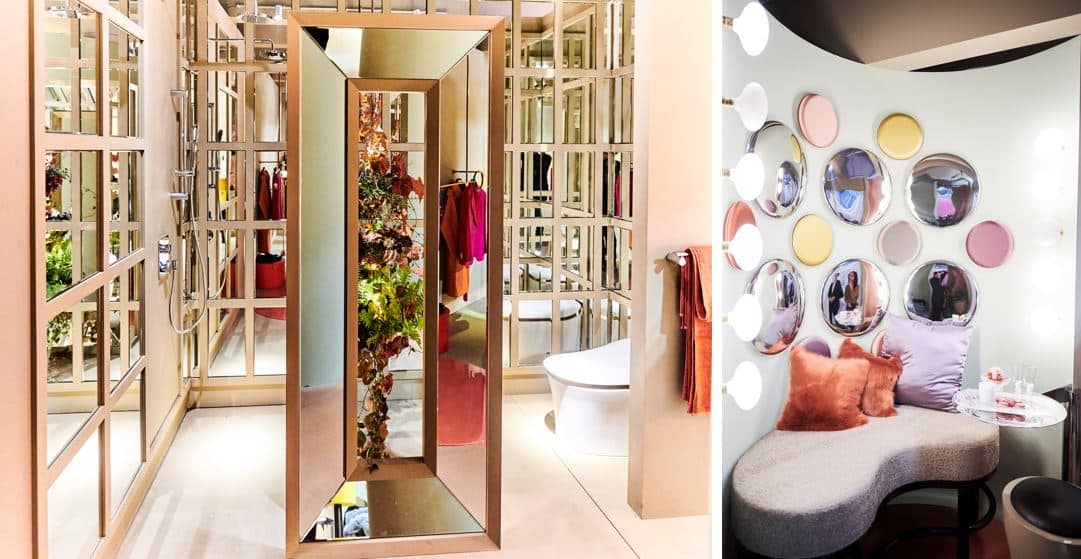 As part of its evolution this year from Sleep into Sleep + Eat, the event is expanding its immersive offering to include three Eat Sets—a restaurant designed by ECHO Architecture, a café from 3Stories and a nightclub by Shalini Misra.