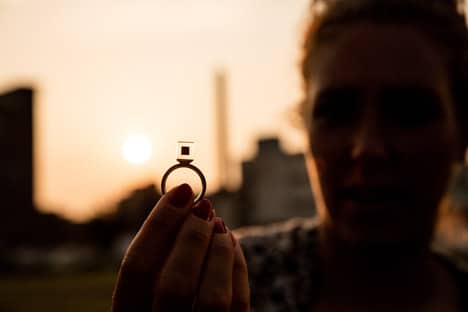 “In the future, waste shouldn’t exist,” Dutch designer Daan Roosegaarde said in the official video for the Smog Free Project.

It goes without saying that bad air quality in cities affects our psychological and physical well-being. Roosegaarde and his team of experts came up with, what they call, “the world’s largest smog vacuum cleaner.”

In collaboration with his expert partners ENS, the team of Studio Roosegaarde, and professor Ursem, Studio Roosegaarde opened its Smog Free Tower to the public on 4 September 2015 at Vierhavensstraat 52. The tower incorporates a patented ion technology that inhales smog.

The tower’s Kickstarter campaign closed in September 2015 with 1,577 contributors, earning 113,153 euros. The tower in Rotterdam is open for visitors until 2017 and should make its way to cities such as Mumbai and Beijing. Stay tuned.