Tambisan village, Siquijor, Philippines—By sourcing materials locally and hiring local construction workers, Villa Kawayan helps support island villagers with each bamboo hut it constructs. The first bamboo hut was built in the spring of 2019. One bamboo bar and a second hut have since been built, with three more huts and a workshop venue on the horizon depending on funds. Support the project, support the local community.

This article was written by the Villa Kawayan team, edited by ArchiExpo e-Magazine.

In the village of Tambisan, on the Siquijor island of the Philippines, the Villa Kawayan project supports the local community by sourcing its bamboo, or kawayan in Filipino, from the Bandilaan mountain and by employing local workers.

The construction crew and the caretakers of the villa are locals from the island. The two bamboo huts and the bamboo bar were built by local artisans and craftsmen. With three more huts on the way, Villa Kawayan is becoming a cluster of bamboo huts that help provide livelihood to the farmers that harvest it, the artisans and craftsmen that build with it, the market vendors and the weavers that make crafts and baskets with it.

Each hut at Villa Kawayan requires fifty bamboo poles that are harvested and naturally treated, meaning they’re made to float in the sea, along the bank, for two weeks so they can absorb the salt from the water, a method used to protect the bamboo against hungry termites.

After the poles are treated, a crew of five people uses basic tools without any heavy equipment or machines to build one hut. It takes two months to produce one hut, taking into account that occasional rain and thunderstorms will pause construction at times.

Local palm weavers made the roofs of the bamboo huts. The weavers harvested the leaves of the palm trees and tied them together to a long and sturdy bamboo pole. Market vendors made baskets from bamboo strips that were used as the lighting fixtures and decorations for the huts.

Having successfully constructed two huts and one bar, the Villa Kawayan project has already begun providing high-quality work for locals, earning more than what they are used to. The project team received gratitude from the crew who said they greatly appreciated the work contract as the minimum wage on the island is very low and work is scarce. 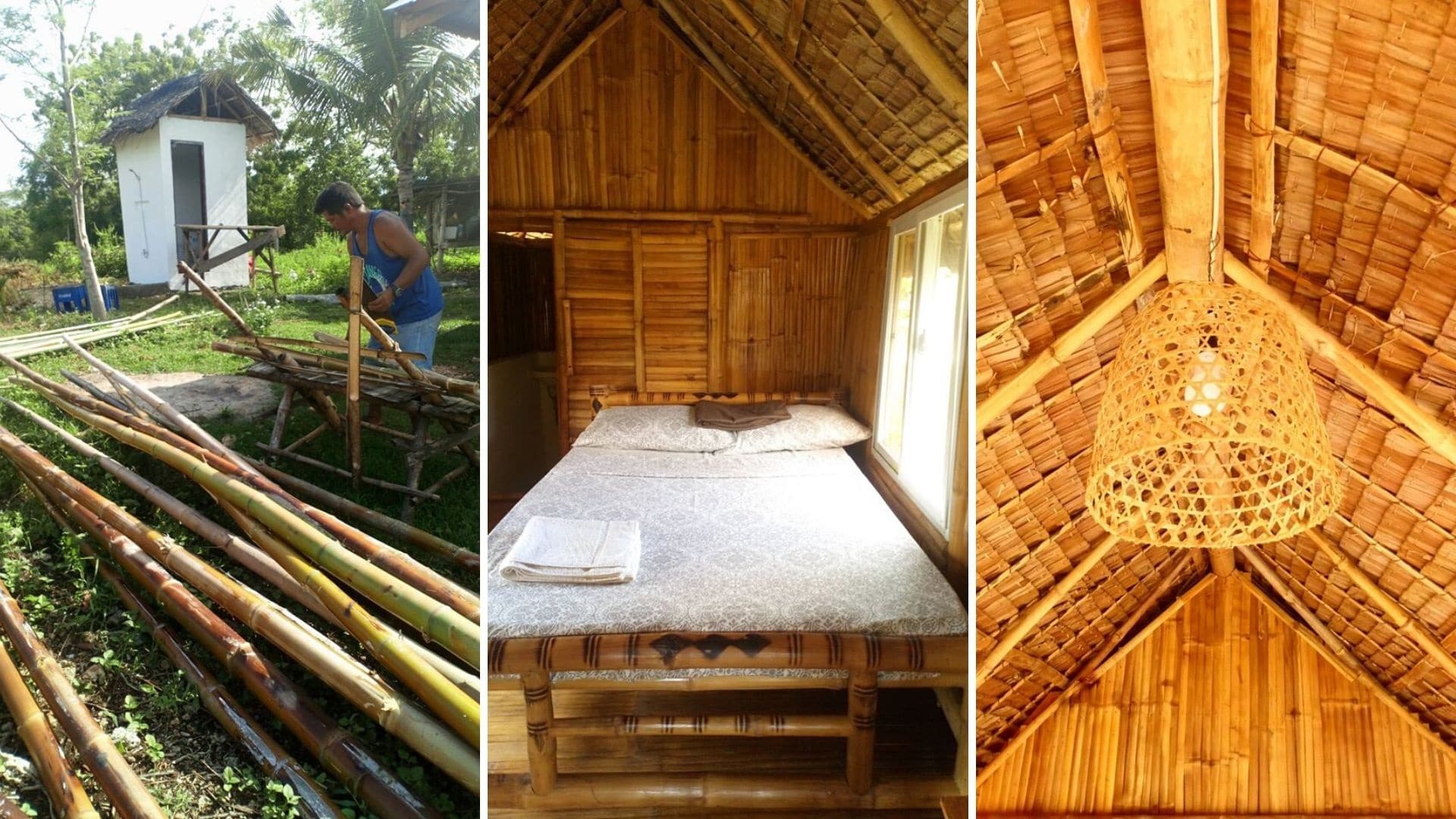 Photo credits (left to right): Kuya Ricky, a craftsmen from Tambisan, working on one of the bamboo huts; Comfortable bamboo bed made by local craftsmen; Bamboo baskets made by local market vendors from Siquijor Public Market were used as lighting fixtures.

The second bamboo hut was built after additional funds were raised in October 2019, providing the workers with a stream of income to support them until the following December when the local annual fiesta took place. The workers had enough food on their tables to share and celebrate during the fiesta thanks to the income that they gained from constructing the bamboo huts.

The Village Kawayan team hopes to continue aiding locals with the construction of three more bamboo huts, but they need funds. Investors can partake in the journey by having a hut built, and travelers can contribute by staying in one of the huts if they go to the island.

Read more about the people working at Villa Kawayan and the local scene in an article published on Vocal.

Would you like to build a bamboo hut or stay in one? Discover the bamboo huts of Villa Kawayan in the island of Siquijor in the Philippines and follow the stories of the people and the little community of Tambisan by visiting the website at www.villakawayan.com and get updated news on Facebook, Instagram and Vimeo.

Behind the Creation of Villa Kawayan

When Filipina musician and songwriter Bunny Liwanag saw families living on just a dollar a day from poor municipalities on different islands where she performed in her earlier years with her reggae group Hemp Republic, she knew that these families needed assistance. Through her travels and life experiences, she gained an understanding on how she might help contribute to the less fortunate communities of her home country and started to get some ideas.

In 2017, Liwanag was assigned by ArchiExpo e-Magazine to do a feature on the Green Village in Indonesia, a bamboo architectural masterpiece designed by Elora Hardy, founder of Ibuku in Bali. There she discovered how bamboo can be a powerful force in changing lives. Finally, two years later, she founded Villa Kawayan with the dream of giving back to the communities of her home country, using up her life savings and funds from loans.

Be sure to read more about Bunny Liwanag’s journey to creating Villa Kawayan in an article published on Vocal.