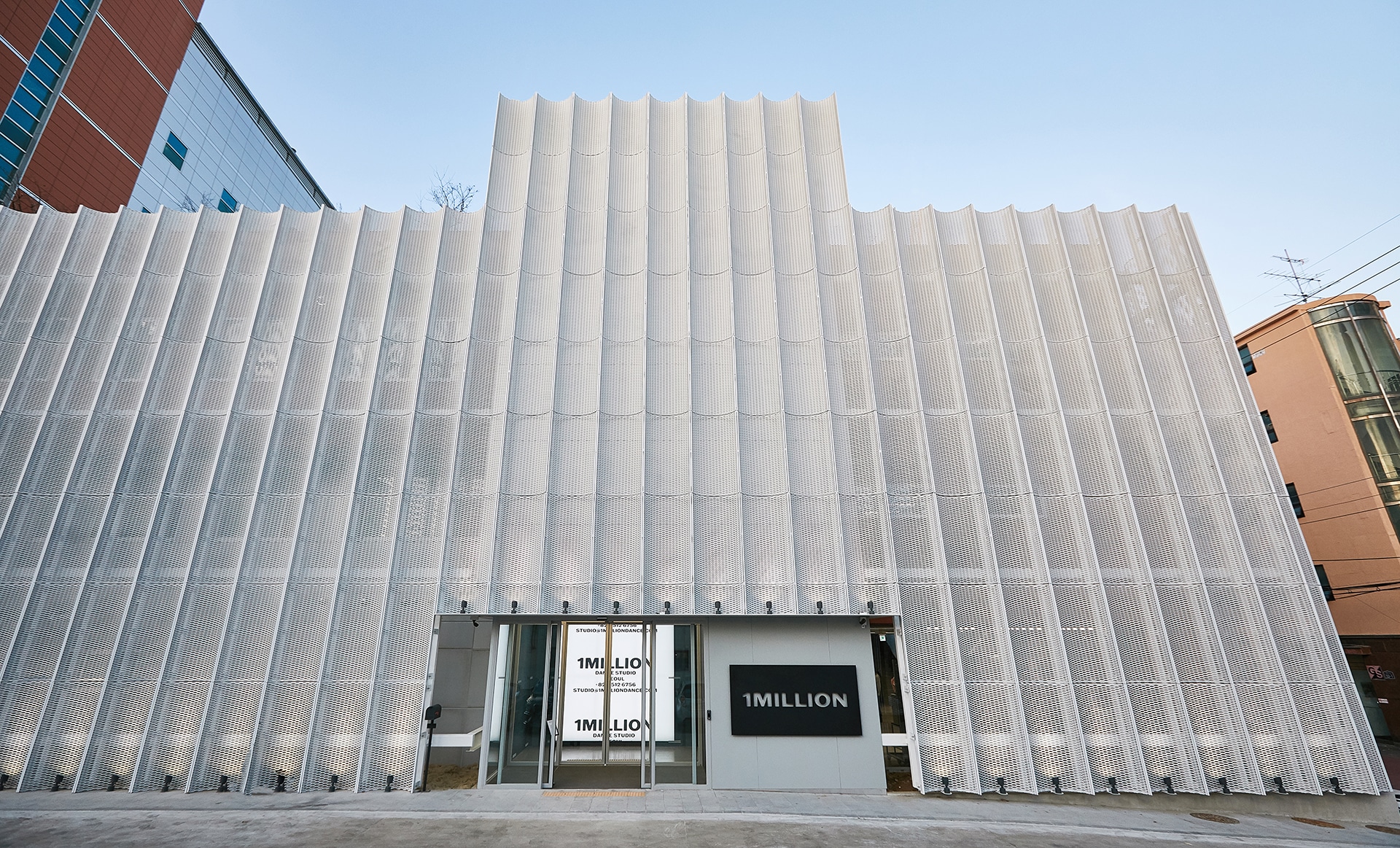 What happens to the architectural layout and interior design of a building when it’s been designed to host street dance as well as the more academic styles?

In January 2020, 1MILLION dance school and management studio in Seoul, Korea, opened its newly designed flagship studio for those who “don’t need a stage to dance” and, ultimately, reinvented the model of a ‘traditional” studio.

Over the past several years, street dance—the category of dance styles born outside of a studio, often in outdoor urban spaces or night clubs—has been making its way into the academic dance vernacular. While dance studios have been opening their doors to breaking, popping, locking and other street dance forms for about a decade, street dancers’ capacity to appropriate any space is beginning to influence more architects and designers.

It’s why the founders of 1MILLION—a dance school and management studio in Seoul, Korea—chose to reimagine the studio’s brand image and the spatial application within its flagship studio in order to provide an appropriate space for street dancers in addition to dancers who are used to a more academic learning context.

Founded in 2014 by Timon Youn and Lia Kim, 1MILLION has since become one of the most popular studios in Korea and recognized around the world. With the rebranding and reworking of their studio, Youn and Kim join the growing trend of dance studios rethinking their space.

In order to achieve the goal of creating a dance-anywhere concept for their new space, 1MILLION hired Montréal-based TUX Creative who worked with Seoul-based Wise  Architecture and EONSLD lighting to design the studio—currently open since January 2020.

“The initial concept I proposed for 1MILLION was ‘every space is a stage’,”  Sook Hee Chun, partner at Wise Architecture told ArchiExpo e-Magazine in an interview. “When I visited their old studio, I was impressed by how people utilized every single space. They danced in the waiting room, the stair landing, the roof terrace and even in the narrow locker room. Almost every single room and space had become a dance floor. This became the key concept for the new studio.”

The 1MILLION Dance design also relies on the observation that as the places in which dance is practiced evolve, so are the places in which it can be viewed. Today, many dance-lovers discover it through online platforms like YouTube and Instagram. With this in mind, the designers applied a neutral color palette throughout the studio for an aesthetic that is easily recognizable in photos and videos without upstaging the choreography.

“Photographability was a key design approach for our team when we looked into 1MILLION Studio. The project was a process of making a series of dance scenes. Various types of spaces were designed: a double-height space, a long narrow corridor with black and white alternating patterns, a flat wide space with gray and black walls, an exterior wall with white concave mesh and so on. I believe that it should be dancers who complete the design. They are the key elements of the space,” Chun told ArchiExpo e-Magazine.

Beyond the aesthetics of the 1MILLION studio, the mechanical design was very important as well.

“Can you imagine how much a building floor moves and how much fresh air is needed when 200 people dance at the same time? A strong structure and heavy mechanical system had to be designed as well,” Chun said.

Lighting plays an important role in the 1MILLION studio because not only is it an element in space design but it also contributes to the visual media results. In an interview, Mee Jeong, CEO of EONSLD, told ArchiExpo e-Magazine:

“1MILLION wanted to create a place where they could shoot music videos in every part of the studio. For this reason, direct and indirect lighting coexist harmoniously. The dance studios have direct lighting from linear fixtures where wide-angle floodlights spread the light evenly, allowing dance moves to be clearly visible. We created a comfortable atmosphere in the corridor and lounge by using indirect lighting.

“The focus was on enhancing the completeness of the space through the expression of hidden light. Partly low ceilings and exposed air conditioning were weaknesses so we emphasized the vertical plane with lighting to expand the space. Efforts were also made to minimize the LED flickering that is visible during video production when the ballast and the instrument are not compatible.”

Has creating a dance studio been an inspirational experience for the designers? According to Chun of Wise Architects, it has. She told ArchiExpo e-Magazine:

“1MILLION Dance Studio houses a creative, enthusiastic group of people and I am looking forward to seeing the unexpected use of spaces in their coming choreography. The body is an important medium and the only resource they needed to express their creativity. I think that is super powerful!”