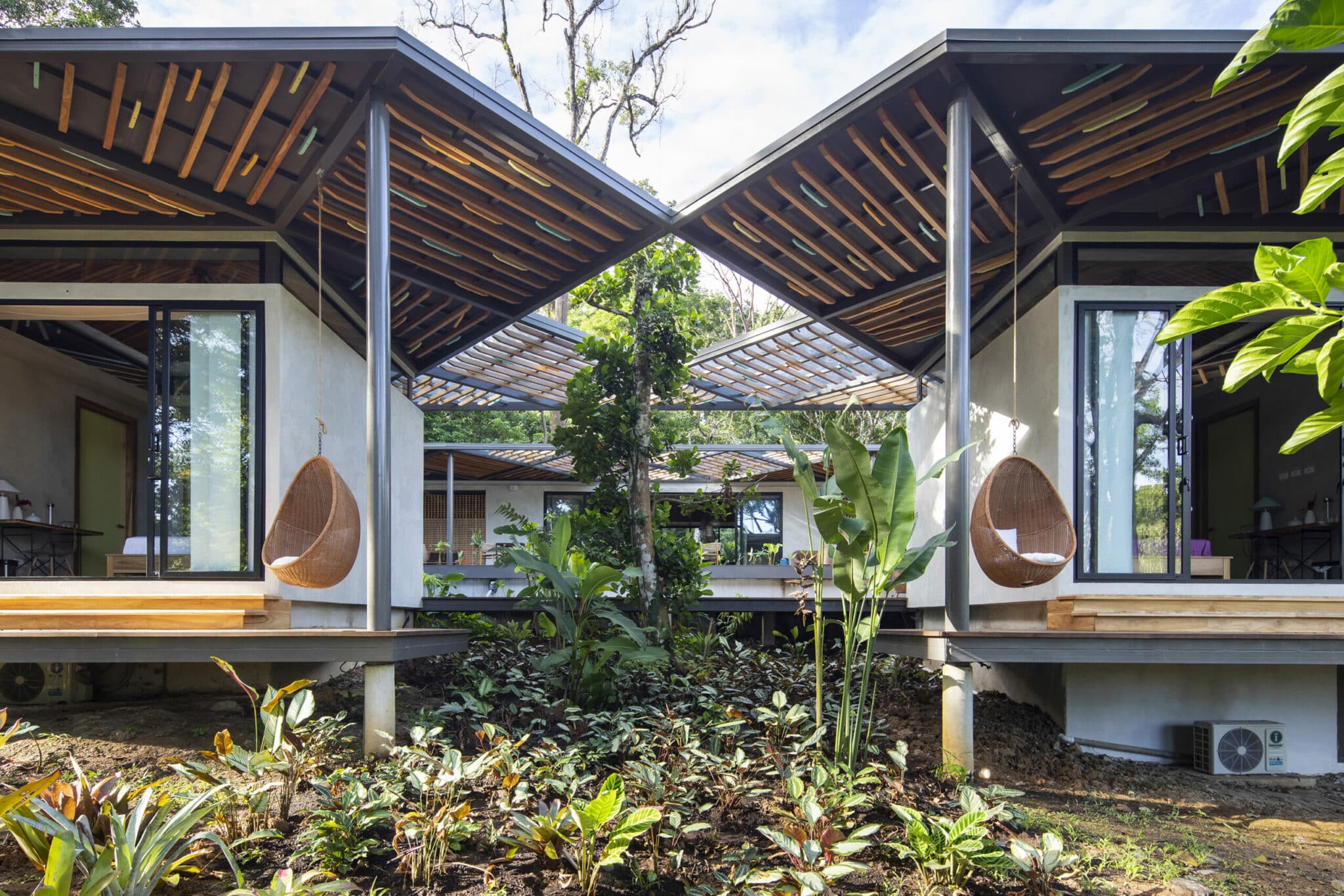 Built in Puerto Viejo, Costa Rica, a new property designed by Studio Saxe blends into nature. Together with solar energy generation, water-efficient systems, and passive bioclimatic design, this project sets a new example design for the tropical region of the coast of Costa Rica.

Anyone building a house in Costa Rica’s Caribbean would think twice before trying to compete in beauty with the surrounding landscapes. And being aware of that is probably what enabled the architects involved to create a new rental vacation property that catches everyone’s attention – in the most positive of ways.

Completed in December of 2021 in the town of Puerto Viejo by Studio Saxe, the Villa BAJA covers an area of approximately 495m2. It has as its main feature a series of pavilions connected through an impressive woven network of triangular pergolas (archways formed by a framework that can be covered with trailing plants), creating an internal courtyard that integrates house and jungle.

Even more impressive, these pergolas can expand or contract according to the occupants’ needs – something quite convenient in a rental place. In this modular structure, both public and private spaces are individually self-contained, enclosed through walls and glass. In this way, new room layouts can be arranged at any time, thanks to the flexible design. In the center of the villa, there is a swimming pool which connects the five pavilions—four of which are identical and square-shaped with a bedroom and a bathroom each, along with a private mini-patio accessible through glass doors; the fifth pavilion is where the kitchen, dining area and living room are. Also, the fifth pavilion hosts the master suite there!

“The triangular pergolas were a lightweight design that adapted to the topographical conditions and weather of the Caribbean side of Costa Rica. By creating separate units surrounding an open courtyard, we allowed for cross ventilation and expansion in maintaining the same line of tropical design throughout the property. The triangular geometric patterns enrich our design and at the same time communicate the fragmentation of the rooms,” Benjamin G. Saxe, founder and design director of the studio, explained to ArchiExpo e-Magazine.

Also, by splitting the mass of the building into separate units, Studio Saxe created a path through trees where people can enjoy the natural vegetation throughout the property. The strategy of aggregation by creating a network of triangled pergolas that can grow or contract depending on the necessity of the client throughout the project is what allows people to circulate and go to different rooms and private or social areas around the house while weaving through existing vegetation and jungle. Each room is a contained space that can be placed anywhere around the property. As the final result so clearly shows, integrating house and scenery was at the very core of Studio Saxe’s aims when developing the property.

“The architecture of the project seeks to coexist in the midst of the conditions presented to us and not be invasive to the environment,” said Saxe.

Solar energy generation and water-efficient systems complete the environment-friendly design. The project was conceived as a series of objects placed around the property and within existing trees, it is also placed stepping down the mountain to allow for the topographic condition to be gentle with the built architecture.  Together with solar energy generation, water-efficient systems, and passive bioclimatic design, this project sets a new example design for the tropical region of the coast of Costa Rica.

As a matter of fact, Studio Saxe was founded 18 years ago in San José, Costa Rica, with the aim of exploring man’s relationship with the natural environment through architecture. Since then, it has grown into an award-winning international enterprise with a multidisciplinary team and has as its philosophy, blending handcrafted techniques with technological innovation in order to create sustainable global solutions to local problems.