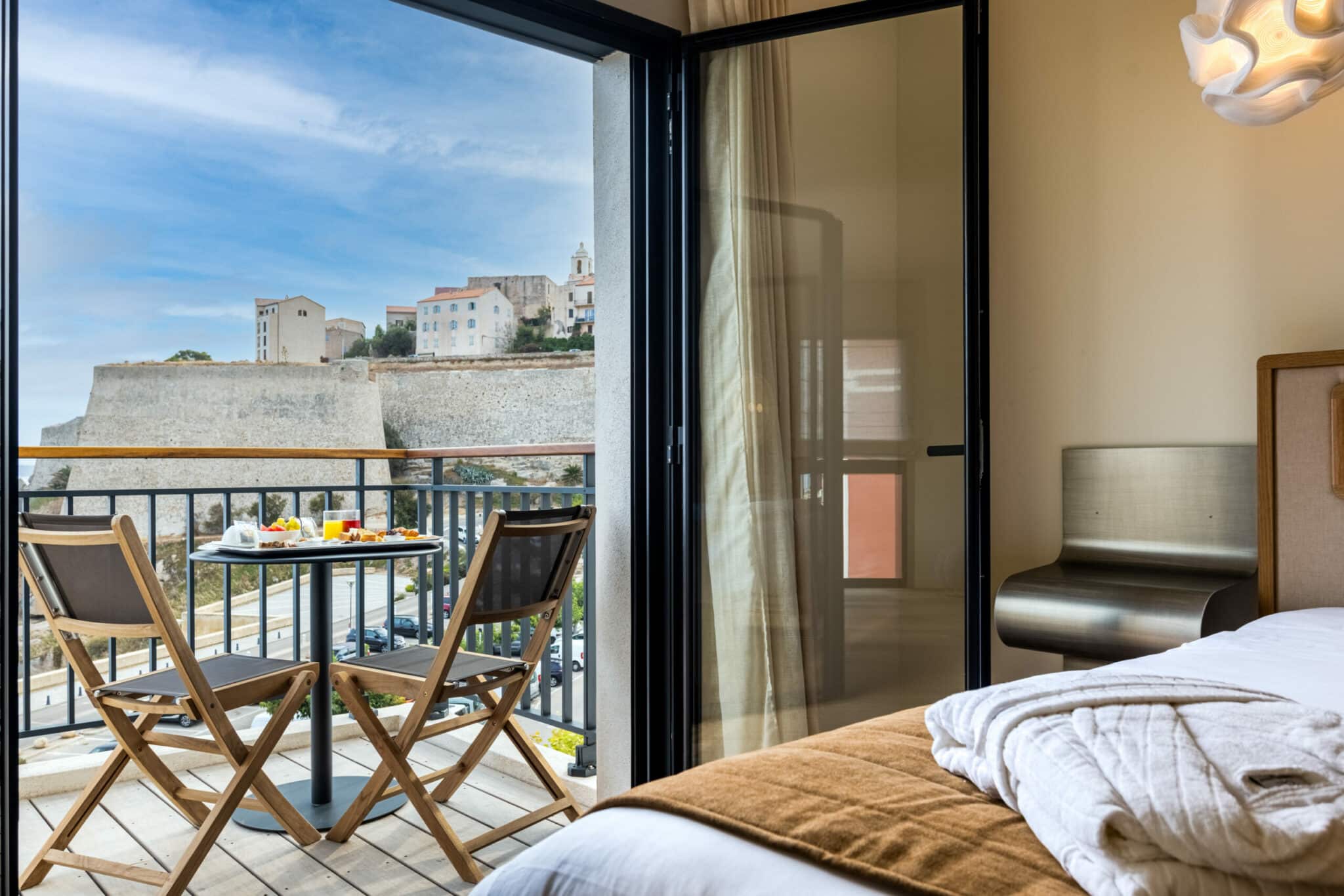 As Léria and Lolla Ceccaldi accompany the family name into its 3rd generation of hoteliers, their childhood neighborhood in Calvi becomes the nesting ground for their first hotel project.

The Corsican city of Cavli maintains its holding on the importance of family and hospitality, and the Ceccaldis accentuate this in the recently opened Kasano hotel and spa, a place where guests can feel entirely at home. Four-star Kasano sits in harmony with the cultural reflection of a warm welcome and kind attention to its guests, and the story of its creation is but the continual weaving of a thread through time, from one generation to the next, epitomizing the strength of family.

Sisters Léria and Lolla Ceccaldi, behind the project, began their journey in the industry as children, guided by their father Jean-Baptiste, manager of the 5* hotel La Signoria. In the very neighborhood where Kasano opened in April of this year, the young sisters, who were born and raised in Calvi, Corsica, spent their childhood absorbing the spirit of the city streets and sea views as well as the experience friends and family had to offer; this neighborhood has always been like home to them. Alongside their father, they discovered their individual passions for the hospitality sector—their dream of following in the family’s footsteps would soon blossom.

“As a young girl, I was always in the kitchen,” Lolla Ceccaldi said in an interview with ArchiExpo e-Magazine during our visit to the hotel. “I recall a time when the chef had me get a rose petal and drizzle lemon on it for a creative delicacy. We participated in so many wild, original creations.”

“I enjoyed painting with my father,” Léria said, smiling sweetly as she reminisced. “We’d paint the walls, doors, frames, whatever needed painting.”

Engrossed in the minute details and personal involvement necessary to see a project through to fruition, the sisters advanced in years without ever doubting the direction they were headed. Never once did they consider another career path outside hospitality. While much of their experience comes from on-site, hands-on work, they completed it with a thorough education in the sector, cultivating their ambition to open a hotel together.

When an abandoned house, one they had known their whole lives, located in their childhood neighborhood, became available for purchase five years ago, they entered the race with their project to create a home-like hotel and championed. Playing off the Corsican word ‘Casano’, meaning small house or home, the sisters conceived Kasano to envelop the very essence of Corsican identity and cultural aspects of Calvi related to family and hospitality.

They secured the purchase of the land and concentrated on the next phase: design and architecture. As would be expected in a family-centered town, word of mouth and previous connaissance brought them the ideal candidate, a very talented young Corsican designer, Lea Zeroil, who worked with very specialized interior designers such as India Mahdavi or Laura Gonzales. The sisters’ father Jean-Baptiste knew Lea Zeroil’s grandmother who has had her own design boutique for many years and a presence in the interior design world. Lea Zeroil designed original furniture pieces for the Kasano hotel and the layout of the establishment; although, the architect who worked on the project before the Ceccaldi sisters called Lea Zeroil had made several product choices so she had to design around them.

“Some of the objects for the guest rooms, such as the suspended faucet for the bathroom sink, were chosen by the architect,” Lea Zeroil said in a phone interview with ArchiExpo e-Magazine.

Still, she designed mostly all the furniture and motifs found in the lobby, the bar, the spa and the guest rooms, noting her preference for having carefully selected certain objects from the flea markets to fit into the theme of the 70s as well as the artisanal work involved in having the custom-design furniture pieces fabricated by local artisans. She signed a variety of the furniture pieces now included in a collection she can edit and make available to future clients.

Lea Zeroil first received a call from the sisters in 2018. The following year, she launched her firm and began working with them on the Kasano hotel. They were progressing in their plans when the pandemic of 2020 hit, momentarily putting a halt on the project. Motivated and relentless, while patient, the sisters have since seen the project through.

Léria and Lolla Ceccaldi had the lobby designed as a large open space with lounges, complete with a ceramic library, objects found at flea markets and artworks on the walls, so customers could feel like guests of an important collector’s house. The home-like impression comes when guests enter their designated rooms. Each floor has its specific color theme corresponding to either earth, sea, vegetation and air; the bedrooms on each floor match one another but each floor is different from the others. The colors were specifically created for the hotel—the light-tinted green used on the vegetation floor, for example, was unlike a green we’d seen before while instantly initiating our mind to connect it with the floral view from the bedroom windows. The mixture of materials and great use of wood enhance the relaxed state of guests who feel, quite frankly, as though they’ve come home.

“The rooms are colorful with patterns in the bathrooms and iconic design pieces like the Panton floor lamp. The decor is eclectic but a general harmony stands out, it is a place on the fringes of what we are used to seeing, creating a warm and unusual atmosphere that places Kasano as the atypical Corsican, cultivated, epicurean, generous and family,” the sisters agreed.

The Loria Bar on the ground level is quite beautiful—a metal bar counter is topped with two layers of marble—, opening to an outdoor terrace for lunch, work or play; and La Terrazza pool area delights guests with its infinity pool and pergola, along with a bar covered with wood.

Le Spa Casanera is meant to be an exclusive experience for guests with products 100% ‘Made in Maquis’—a term the Corsicans use to refer to the island’s lush vegetation, a plant formation characteristic of regions with a Mediterranean climate. By choosing the emblematic Corsican brand Casanera for the Spa, unique treatments made from certified 100% organic essential oils combine the virtues of Corsican plants with that of the everlasting flower, the star of the island, with powerful regenerating properties, according to Léria. The Spa and Wellness area has a hammam, a sauna, two treatment rooms and a fitness room with Water Rower machines.

Each aspect of the hotel contributes to the fine exhibition of materials such as brushed metal, concrete resin, rattan per touch, fabrics from publishers (Pierre Frey) as well as antique furniture mainly from the 70s, ceramic pieces from the Jean-Roger workshop, blown glass fixtures by Venini. In line with the idea of entering the lobby as though we’re being welcomed into an art collector’s home, the Kasano hotel has joined a very select club called Art Travel which partners with high-class hotels, such as Château de la Gaude in Aix-en-Provence; the hotels host exhibitions, serving as a showcase for regularly renewed works of art.