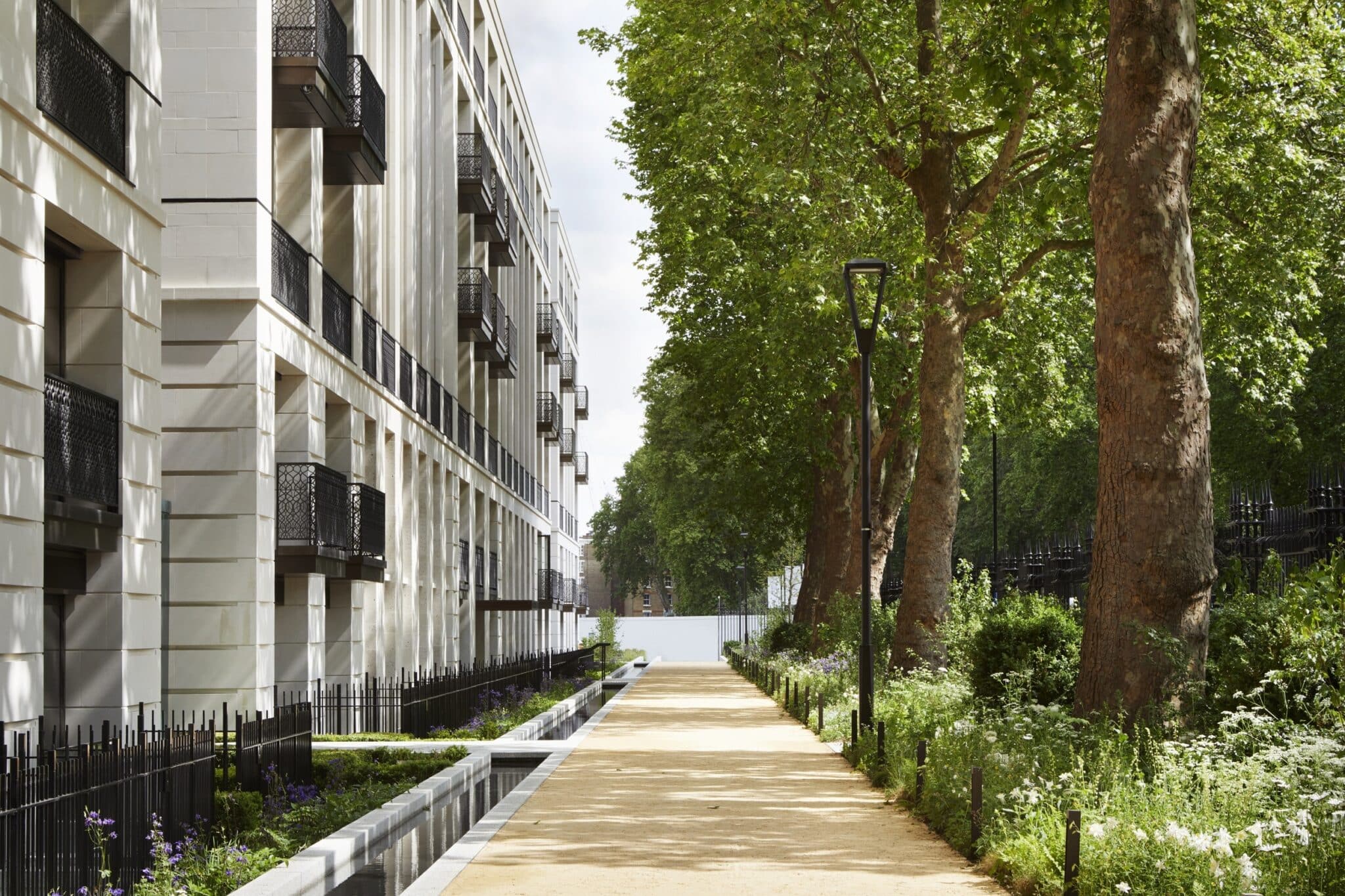 Once home to two battalions of infantry built in 1862, the Chelsea Barracks property was vacated in 2008 to create a new development. To accompany the architectural feat, an eleven-piece furniture, homeware and fabrics collection called Chelsea Barracks Collection was launched this year.

The history of the Chelsea Barracks started in 1862 when the original barracks made to house two battalions of infantry were completed. The complex retained its original purpose until 2008 when it was vacated to give room to a new, major development in one of the most desirable neighborhoods of London.

When the original plans for the new development were drawn up and submitted to the Westminster Council, the design centered on copper, glass and concrete pavilions. However, the concept was met with widespread criticism – including from Prince Charles, who believed that the designs should be more traditional and connected to the origins of the place.

The developer Qatari Diar, a global leader in sustainable real estate founded in 2005 by the Qatar Investment Authority, withdrew this planning application in 2009. Two years later, they presented a new plan designed by Squire & Partners, based on the idea of adapting architectural principles of the Georgian period for a contemporary age.

One of Sixteen Worldwide Developments to Achieve LEED Status

The 12.8-acre site will consist of 448 homes divided into apartments; penthouses, mews and townhouses—some of which have been constructed—with an array of communal amenities. The project is set for full completion in 2027.

The developer completed three buildings with 64 apartments and 3 duplex penthouses as part of phase one; of these homes, 85% have already been sold, with most buyers having taken up residence around September 2019, whereas The Singer Suite remains a showroom for the moment. The thirteen Townhouses of phase two, of which three have already been purchased, have also been constructed.

The amenities include an area called The Garrison Club which hosts a 12,768ft² private spa, a 20-meter swimming pool, a fitness center with a private training studio, steam room, sauna and treatment rooms and a tepidarium. The property will have a business suite, a 16-seat cinema, a residents lounge, board rooms, a private function room and a games room. In addition, a 24-hour concierge service is available to the residents of the condominium.

Major deciding points were the use of Portland stone which has a long lifespan and much lower embodied carbon than other materials; the thorough use of windows and balconies to make the best of daylight; landscape strategies which included planting native species, increased biodiversity and irrigation through water recycling.

Also, for the first time in 150 years, an area corresponding to 40% of the overall development site will be accessible to the public in the form of seven different gardens.

The Townhouses and the Chelsea Barracks Collection

Set amongst five acres of gardens, the 9,947ft² townhouses have six floors including two basement floors. International award-winning PDP London designed the architectural plans for this group of homes. The floor designs they created are all finished in English herringbone and marble with the flooring of the interiors produced by 1508 London.

In the completed unit, the upper three levels consist of four en-suite bedrooms including a principal one with two dressing rooms, a formal reception and dining rooms. The lower three levels have living areas, an office, and a large, bespoke kitchen (fitted with Sub-Zero and Wolf and Gaggenau appliances) which opens onto a private garden and a private entertainment and amenities area such as a gym, a swimming pool, a cinema room and a wine cellar.

The parking area, the staff accommodation and utility rooms are all underground. At the private terrace on the top, one enjoys the view to landmarks such as the London Eye within an urban oasis designed by landscape architect Randle Siddeley and where Ethimo furniture is set among green biodiverse roofing and bird boxes. All Townhouses are fitted with lifts that access all floors.

Known for its sophisticated projects and respect for tradition, Albion Nord is the firm responsible for the interiors. As in the case of the buildings’ facades, the interior aesthetics are both timeless and modern; incorporating neutral tones, imaginative layering of natural materials with strong patterns and contrasting tones and textures.

The Chelsea Barracks Collection is an eleven-piece collection of furniture, homeware and fabrics designed by Albion Nord and crafted by British artisans. It was launched this year and was exhibited in the last edition of the London Craft Week. A physical store inside the Chelsea Barracks will be opened to the public in 2022.

“Each one of these items has its own story relating back to the historical Chelsea Barracks, the Georgian period in Great Britain or the local Belgravia area. We don’t want to make them for the residents only, we want people to have a taste of Chelsea Barracks, and these items will become like indelible pieces of history in their own right. With time they will be like antiques, collectible items,” Chantal Richman, the spokesperson for the Qatari Diar Europe, told ArchiExpo e-Magazine during a visit to the barracks.