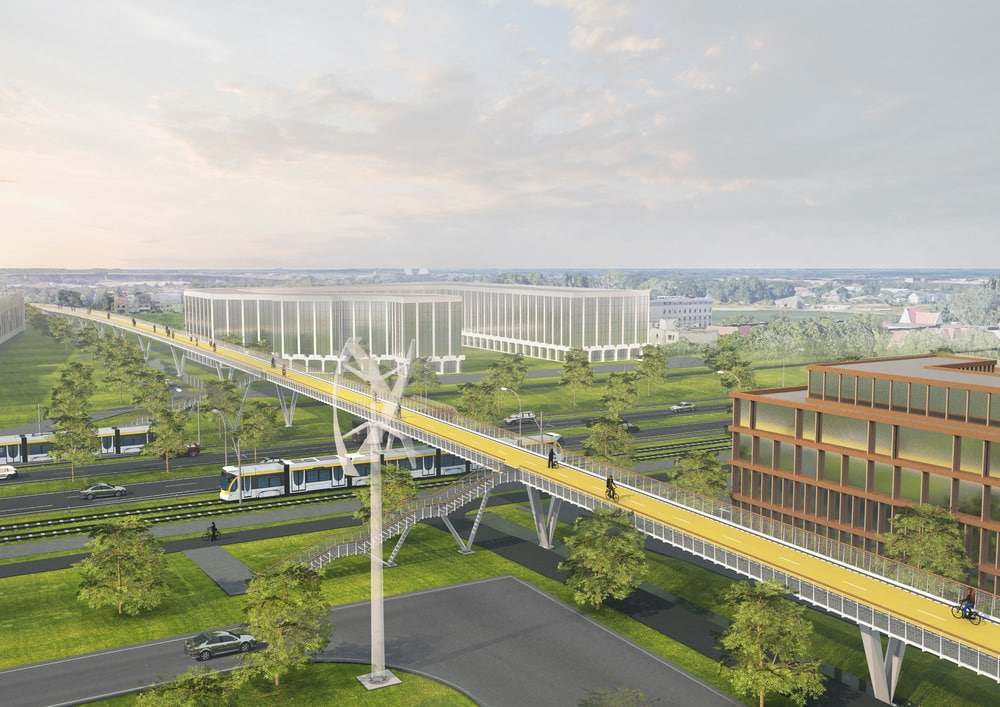 Construction on the longest bicycle and pedestrian bridge in Flanders, Belgium, began this December with a projected completion date scheduled for 2024.

Governments worldwide have been implementing strategies to render cities “smart” by integrating more bicycle and pedestrian paths. City officials have been working with urban planners to include bicycle culture for some time, and we’ve seen quite the evolution in how they’ve integrated bicycles into cities over the last few years. The latest news in Belgium is its bicycle and pedestrian bridge project in Flanders. Construction began in early December with the laying of the first symbolic meter of the bridge.

As part of the MoVeR0 consultancy consortium, De Werkvennootschap commissioned architectural studio ZJA to produce the architectonic design for the cycle bridge over the A201 Leopold III-Laan in Brussels. Once completed, the bridge will stretch to 710 meters in length, including a 510-meter-long deck with 200 meters of sloping approaches. The bridge will be open for use in 2024.

“To make this imposing bridge fit its surroundings, we gave it as light and transparent a silhouette as possible,” Ralph Kieft, architect and partner at ZJA, stated. “To achieve this, the white bridge is made of steel and rests on V-shaped grey steel columns with cut-away corners. With its gradual gradient in a continuous upward curve and its perfectly straight trajectory, the cycle bridge makes a long, fluid gesture that marks the boundary between Flanders and the Brussels-Capital Region.”

Colored surfaces separate the footpath, anthracite in color, from the cycling path which is a brownish-yellow or light ochre. This distinction ensures a safe and easily legible layout on the bridge. At its highest point, over the highway where cars and trams pass, the deck is almost eight meters above street level. The steps that give access to the bridge at the tram stop match the design and appear transparent. They are also elongated and shallow enough to ensure a comfortable climb to the bridge deck.

The A201K bicycle and pedestrian bridge designed by ZJA not only creates a safe crossing of the Leopold III-Laan, but it also forms a previously missing link in the cycle network in and around Brussels. The new bridge will improve accessibility and quality of life for the surrounding area and in particular the traffic safety and mobility of cyclists and pedestrians.

The A201K bicycle and pedestrian bridge forms part of the Work on the Ring program, with which De Werkvennootschap intends to create better mobility on and around the ring road that encircles Brussels and to improve the quality of life for those who live there. To achieve this, an investment will be made in the coming years in better public transport, the redevelopment of the Ring, and safe, rapid connections for cyclists.

“There are lots of traffic jams and accidents on the Ring around Brussels every day. It is also outdated. The Flemish Government, therefore, wants to redevelop the R0 and its adjoining infrastructure, as well as tackle traffic on smaller roads and the fragmented green landscape. The R0 is an important economic asset. Its redevelopment gives it a new lease of life, with more space for cyclists and alternative modes of transport,” as stated on the Arcadis projects page for the bridge.

The efforts to increase options for cyclists have given rise to a boom in the biking industry ecosystem in Flanders, not to mention elsewhere in the world. Velofollies, the largest and most varied event dedicated to cycling in Belgium and Luxembourg, offers visitors an overall picture of the cycling market during its yearly massive bike show.

In 2021, the Belgian federal government adopted a first-of-its-kind federal action plan for the promotion of cycling: “BE CYCLIST.” The main focus is on topics where the federal level has retained competence, particularly in creating a more bike-friendly fiscal environment, improving the bicycle friendliness of the national railway company NMBS/SNCB and fighting bike theft.

The uptick in the number of people choosing biking as a leisure activity is expected to drive market growth. Bicycles are projected to grow in popularity as a practical method of exercise for maintaining a healthy lifestyle free of obesity and other diseases. On all new Belgian trains, a preliminary law proposes to create specific areas for the carrying of at least eight bicycles which will benefit those traveling between cities who still require their bicycle for inner city transportation. Now, companies such as auto giant Lucien are launching into the bike industry. We’re not looking to see the end of this trend anytime soon.