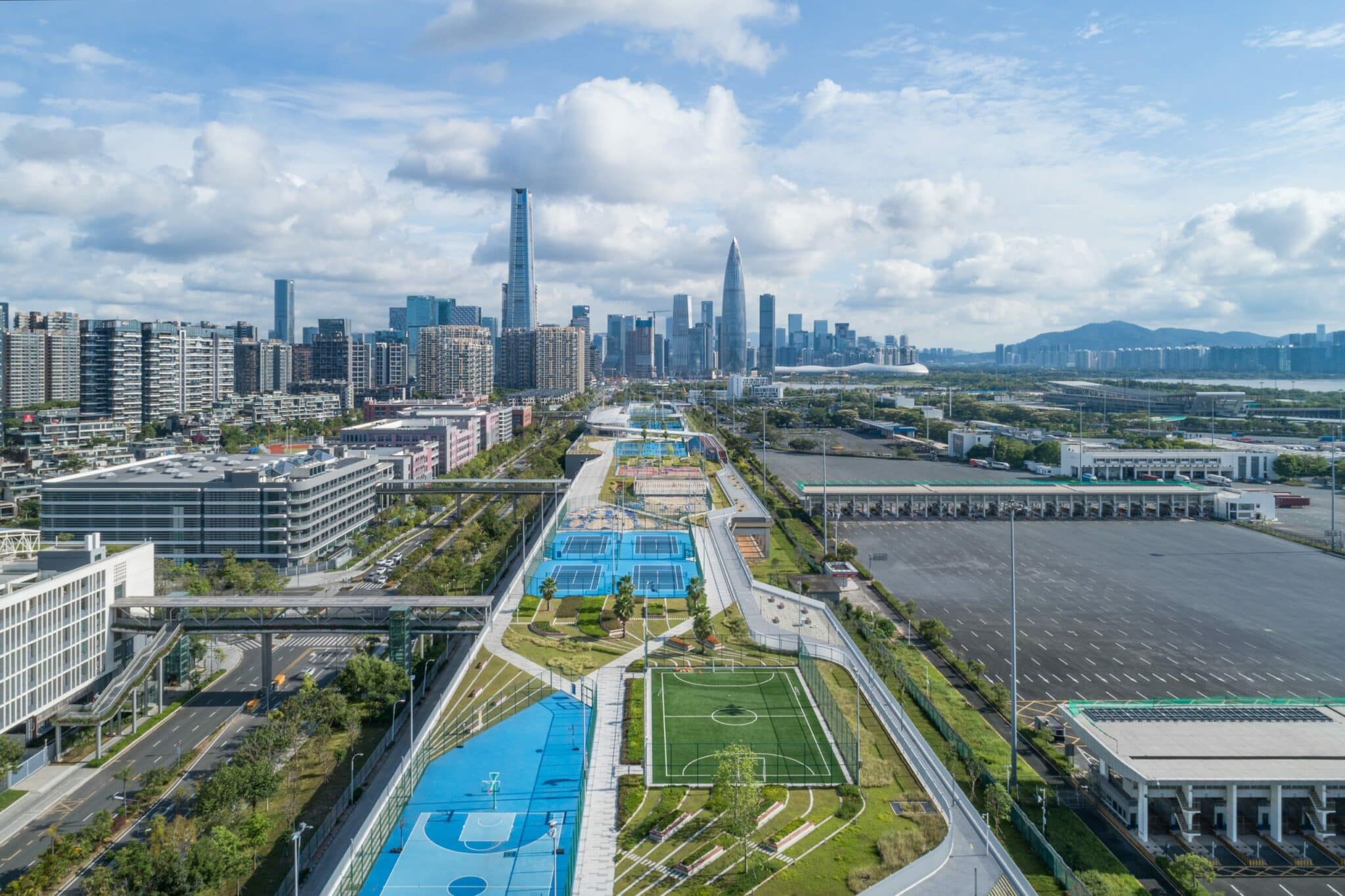 The Shenzhen Skypark combines efforts from its community, government and Crossboundaries, the architecture firm behind it. We discuss the challenges of such a new idea for the city with Hao Dong, co-founder and partner at Crossboundaries.

It took five years to transform what was once an ugly rooftop into Shenzhen’s newest architectural landmark, Shenzhen Skypark. Located atop a subway maintenance building and smack dab in one of the most valuable sections of real estate in the city, the roof has been recrafted into a usable elevated sports and leisure space. For all parties involved, the sometimes-contentious birthing process was worth the effort.

While not yet fully open to the public due to Covid restrictions, the once blighted and now green 1.2-kilometer-long rooftop will soon provide a range of public benefits to the city. These include increasing neighborhood accessibility, providing sports education facilities and, potentially, a space for commercial activities.

For the Nanshan district government, the surrounding community, the schools and Crossboundaries, the architectural firm that designed it, there was much heavy lifting to get what was initially thought a “crazy idea” off the ground.

“The idea really comes from all sides,” said Hao Dong, co-founder and partner at Crossboundaries. “It is only when all parties are ready that you can have a project of that size come through. The government had the initiative, the schools had the needs, and there was this piece of land in between.”

Several issues could have scuttled the project from the start. Residents were concerned property values would be impacted by restrictions on views. The metro company that owned the facility was unsure how the structural integrity of the building would be impacted. The city had security concerns about public access to a high point overlooking a border checkpoint. Getting everyone on board to understand the benefits outweighing any risks was key, said Mr. Dong.

Those planners caught on to Crossboundaries idea of emulating New York’s High Line Park to create Shenzhen Skypark. The ability to show a similar successful project in a major city helped promote what was initially a “crazy idea” according to Dong, to the city. The metro company acquiesced after a technical assessment of the building, potential load issues and security arrangements were resolved.

“The challenge was that this was a new thing for everyone,” Dong said. “In terms of the concept, in terms of realization, in terms of the idea, it was new. It was a challenge from the nuts-and-bolts level up to the government decision-making level, in particular, in that area where real estate value is so high.”

Currently, parts of the Shenzhen Skypark have opened for students from Shenzhen Nanshan Foreign Language School and Shenzhen Bay School to use for physical education and afterschool sports activities. Dong said he’s seen a transformation in the attitude of students who can now access the park.

“The schools and school kids are very happy because we know how important that space is for them,” Dong said. “I’ve seen it change their mood, when I am visiting the city, I sometimes hang around there after school and see how much they embrace this open public space.”

Beyond Covid-restrictions, it is still uncertain how the city will manage the park and what public institutions will have responsibility for it. It isn’t known whether the park will have 24-hour access, whether there will be time limits, or how many people would be able to enter at the same time.

“The understanding of the management of public space in China is still just starting,” Dong said. “For the city and for the public, it will take some time.”

Still, after seeing the completed project and the potential it has for the city, Dong has words of advice for other designers and architects with possibly crazy ideas.

“Don’t be afraid to raise your notion, exaggerate your ideas,” he said.

Dong recalls a dinner where the team proposed the idea.

“[We said] we have this dirty roof here, this wasteland, why don’t we turn it into something exciting to benefit the city, the schools, and the neighborhood?” Dong recalled. “Back then this could be considered a crazy proposal. We raised the idea and it eventually turned to reality. And we had to fight for it in different ways along the way. People had concerns, not because they were against it, but just because they didn’t really understand what it would be like.”