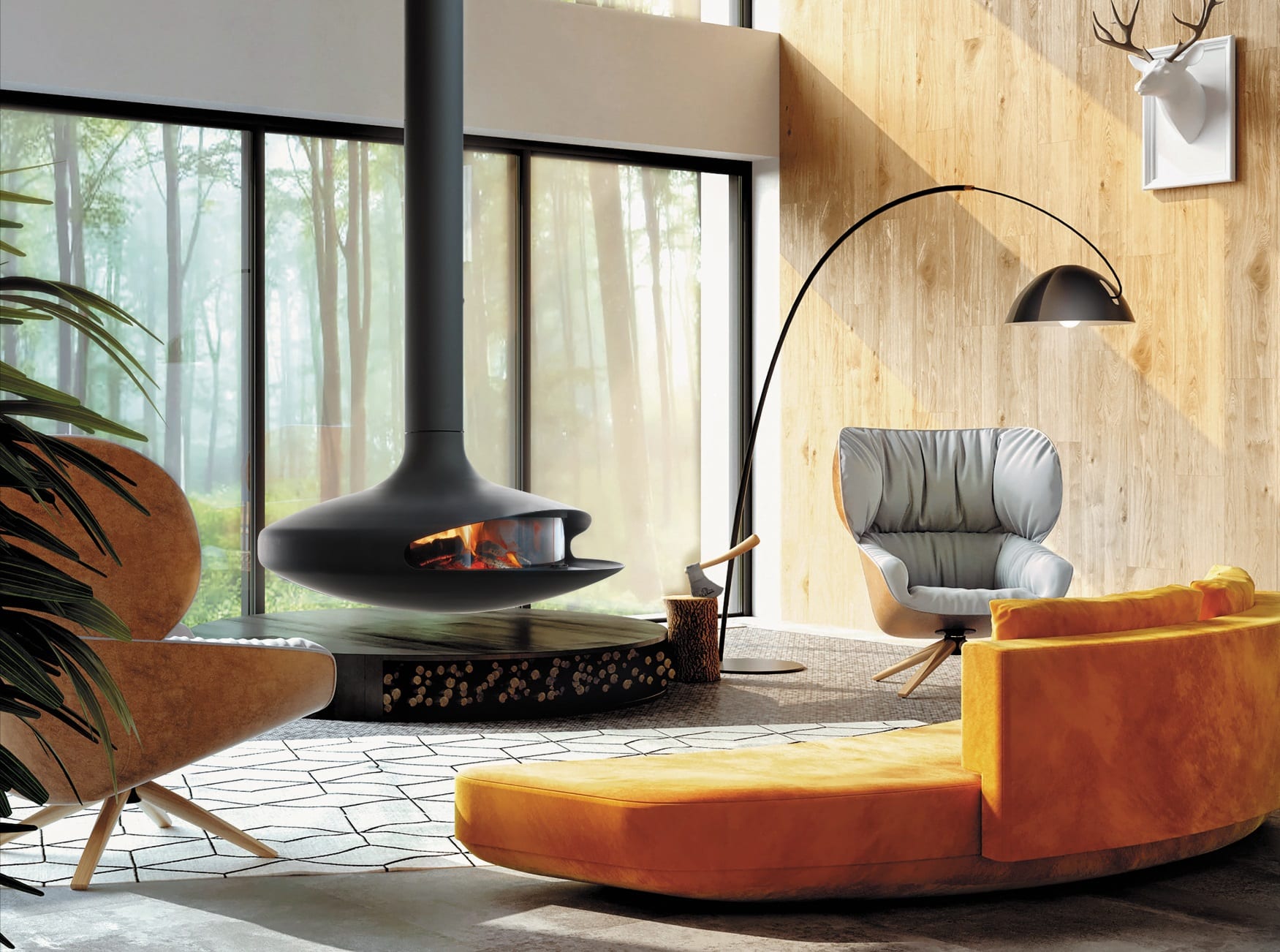 The featured image is the Slimfocus, a cylindrical fireplace designed by French manufacturer FOCUS that can be suspended from a ceiling or fixed to a floor or wall. Courtesy of FOCUS.

French chimney and fireplace brand FOCUS held a three-part roundtable meeting online on July 1 which spotlighted the 2022 European Ecodesign regulation. A panel of architecture, design and decoration professionals discussed the new rules, which come into effect on January 1, 2022 and will directly affect wood-burning appliances.

During the live broadcast hosted by journalist Hubert Vialatte, panelists talked about how FOCUS has changed the role of the fireplace, how new Ecodesign regulations influence uses and design, and why creativity and innovation are the best assets in the face of change.

How has FOCUS changed the place of the fireplace in our interiors?

The panelists discussed how FOCUS has been shaking up design codes internationally since releasing the Gyrofocus, designed by Dominique Imbert, in 1968. The company is considered the first manufacturer to move the fireplace from the wall to the center of the room. The Gyrofocus, which rotates 360°, was exhibited in the Guggenheim museum and was voted the World’s Most Beautiful Object in the 2009 Pulchra Design Competition. Today, FOCUS continues to release designs adapted to changing demands.

“Over the years the fireplace has evolved in its shape but also in its placement in the home,” according to Soubiran. She pointed out how suspended, revolving and transverse chimneys have enabled the hearth to become a central sculptural object.

“Homes today meet thermic regulations that mean we no longer need to heat like we did before,” said Bardin. “The chimney fills a need for togetherness.”

“At the same time, certain areas are becoming very urbanized. Chimneys like the Gyrofocus need vast spaces,” Bardin continued, “but today an urban clientele can have a FOCUS chimney, the Slim Focus (2015) for example, with much more restricted space.”

For Vincent Grégoire, fireplaces in public areas, such as in hotel lobbies, also compete with screens. It’s worth noting that he sees the fireplace of the future as possibly a decorative holographic piece. In the meantime, he’s dreaming of a white Gyrofocus in a house in Ibiza.

David Hybre of architecture firm Hybre Architecte, FOCUS Italy agent Fabio Cameroni, and FOCUS Export Sales Manager Guillaume Malaise, panelists of the second round table, discussed Ecodesign and how it influences fireplace usage. Ecodesign regulations have been in effect for gas fireplaces since 2019.

According to Malaise, some FOCUS models are not affected by the new regulation.

“The original open wood-burning Gyrofocus is not considered a heating appliance, according to standards, because it’s a decorative object in which we light a fire, and is not designed for heating,” said Malaise. The environmental impact of decorative fireplaces is reduced because they are in use less often than heating appliances. “However, over the past several years we have worked to develop an Ecodesign heating version, such as the new glazed gyrofocus, which will be released in September and meets energy performance and air pollution criteria,” Malais continued.

FOCUS has often been ahead of the curve on European eco regulations because they sell models in 80 countries with different environmental regulations. Italy for example, the largest market for Gyrofocus fireplaces, has complied with a rating system since 2018 that is stricter than current European regulations. According to Malaise, standards modify uses. He gave an example of the outdoor chimney market being positively influenced by greater insulation in the home.

“Thanks to all of these standards, we’re able to release a range that is very broad.”

During the discussion, Hybre noted that the durability of FOCUS fireplaces influences the way he designs homes. “In my firm, we draw the fireplace as we’re drawing the house. It helps us to structure space.” Host Fabio Cameroni remarked later in the discussion that FOCUS fireplaces often survive through several homes.

Why creativity and innovation are the best assets in the face of change?

To create the new glazed Gyrofocus, satisfying heating appliance standards without degrading the iconic outside envelope was a long process, according to Ployé.

“It was a challenge for us because the temperatures are significant so we get a lot of warping.” Gritti explained that each fireplace model must be approached differently, “Integrating the combustion chamber for the Slim Focus, which is narrow and high, is not the same as for the wide Gyrofocus. The combustion chamber always has to be adjusted to the product.”

The FOCUS models have also become more complex over the years, from the original open Gyrofocus that has about ten pieces to the closed Gyrofocus which has about one hundred. In addition to the challenge of safely bringing air and gas in, and gas exhaust out through a narrow tube for the new model, the company required that it rotate. “A Gyrofocus that doesn’t revolve wouldn’t be a Gyrofocus,” said Gritti. “The technique adapts to the design and not the other way,” he said.

According to Ployé, an important part of innovative design is remaining down-to-earth.

“Not everything works the way you imagine it. You have to be very pragmatic and the people in the lab have to work in close collaboration with the research and design department.”