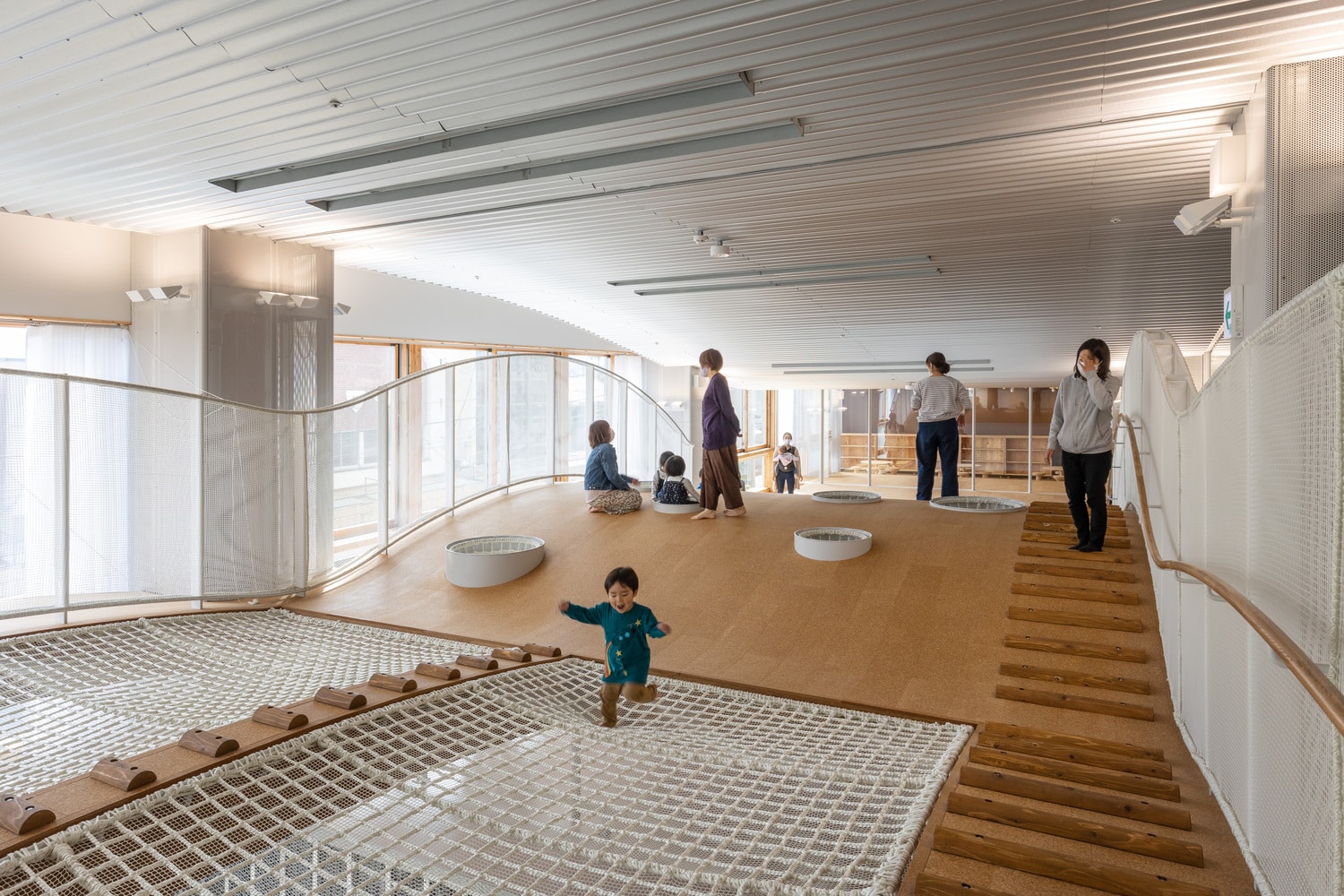 Hospital visits are never wanted, and less so for children. The rooms are often designed and left cold and empty, void of attractive, distracting accessories. Contrary to typical centers, UtA (Unemori teco Associates, a joint venture between UNEMORI ARCHITECTS and teco) developed a park-like style for the Kitakami Children Health & Support Center.

Instead of building a new complex, UtA/Unemori teco Associates converted the first two floors of an eight-story commercial building in the city center of Kitakami in the prefecture of Iwate in Japan into an inventive health and childcare support complex with a total floor area of 4,000 sqm. They also refurbished the facade of the existing building, featuring a glass front and equipping it with a spacious entrance area with sliding doors, and integrated the health and childcare support facilities as well as a public meeting space.

“Converting a commercial complex, created by rationality like in any city, as a place for various people is a new attempt in Japan, and we designed it as a project that could be a model case in the future,” Hiroyuki Unemori said in an interview with ArchiExpo e-Magazine. “The project team, composed of citizens’ experts and university professors involved in health and child-rearing, was created by Kitakami city. We proceeded with the design in frequent discussions with the project team.”

The commercial building dates back to 1999 and, while this isn’t historically interesting, it exemplifies how the repurposing of existing structures is economically and environmentally smart. The conversion highlights the associates’ architectural competence for sensitive redevelopments of existing buildings and the re-use of rare space in the city. The two lower floors of the existing building provide a rectangular space and were gutted entirely for the conversion. The new complex is structured around a central, open space, featuring gently undulating floors and ceiling, as well as a facade with large windows and an entrance area.

“The challenge was not only to develop a building for people involved in health and child care but also to create an open space that would be equally accessible to other residents of the city and provide a meeting place. We deconstructed the existing rectangular grid with softly undulating floors and ceilings that overlap the rigid structure of the room. This creates a shift and softness in the space. In addition, for the generous space created under the undulating ceiling, we have designed a number of seating areas with varying textures and sitting heights that divide the space and make it accessible because of their human scale,” continued Hiroyuki Unemori.

UtA/Unemori teco Associates structured the space around a central multi-purpose indoor plaza, an open space in the center of the first floor that is accessible to the public thus connecting the city outside with the facility. The high-ceiling plaza consists of an atrium, a café and a reception desk and serves as an entrance and waiting area to the surrounding rooms with various functions such as a facility for medical checkups, an indoor playground, an exhibition room, a consulting room as well as an office area. Transcending the building typology of a childcare center, a number of seating areas with varying textures and sitting heights were installed as a public meeting point in the foyer.

Going beyond the building’s childcare center typology, the lobby features an array of sitting areas of different textures and sitting heights that are installed as public gathering points. The retail buildings were composed of simple rectangular grids, which Uta/Unemori Teco Associates re-constructed, creating playful undulating ceilings and floors. The wavy shapes provided an interesting, off-beat flooring experience to the playing area, and, as the ceiling, provided safe clearance to the health care vehicles, leaving ample ducting space above. The ceiling is lit throughout the entire surface, creating a shadow-and-light play that adds depth to the compound.

“We wanted to create a space like an outdoor park without artificial lighting by taking in natural light in the undulating translucent ceiling, but it was difficult to realize taking and diffusing the natural light.”

The architects mirror the waves in the ceiling and floors to the exterior of the complex, creating an impressive overhang to the facade. As the external walls had previously had few or no openings, UTA/Unemori Teco Associates enclosed the structure with large windows and sliding glass doors to allow for a view of the interior from outside, thereby reinforcing the building’s open nature and its relationship with the city.

Previously, UNEmori architects had created an earthquake-proof community center in Kitakami, part of the regeneration in the town, just like a home in Takaoka city that was raised up on stilts. The 4,000-square-metre space includes general healthcare services and child care counseling services and is also the public gathering space of the town of Kitakami. Uta/Unemori Teco Associates structured the space around an inner, multi-purpose central plaza, a publicly accessible space at the center of the ground floor, thereby linking the city beyond to the facility.

“Japanese cities are getting mature and we think renovations like this project will continue to increase. Renovation like this project is a creation that combines the old with the new, and I saw it as a great potential. Also, I think that a space that anyone can freely access and spend their time like this time, that is, architecture that allows the existence of others, is very important in an inclusive society that recognizes contemporary diversity.”

The Latest News: Sukagawa Community Center and BASE

UNEMORI Architects has also collaborated with teco on a new shared office space called BASE where the two firms will set up camp. The renovation project involves a building constructed in 1964 in Asakusabashi, a district where wholesale businesses specializing in leather and decorative materials are concentrated. They questioned the significance of gathering and working together in the age of coronavirus and the kind of space needed for today’s era. Through a competition, the two firms decided to let people circulate freely and activate the entire building using four floors as common areas, accommodating a meeting space, kitchen and restroom, while each of the two offices maintains its own base of operations separately on the remaining floors.

“It was not possible to create an atrium across the floors, because it was a reinforced concrete building for rent and also because of seismic performance issues. Therefore, we gave unique characteristics to each space while clearly defining the concept of each floor,” as stated in a press release.

They designed the first floor as an open corner site in the city in order to actively take part in community events including the Torigoe Shrine festival. The second floor houses a naturally ventilated garden where the floors are waterproofed along the perimeter and finished with large tiles. Teco is based on the third floor and UNEMORI Architects on the fourth. The fifth floor reveals a library, and the sixth floor is an outdoor deck with a restroom covered with a tent.

UNEMORI Architects collaborated with Ishimoto Architectural & Engineering Firm on the Sukagawa Community Center. This multipurpose complex built in Sukagawa City, Fukushima Prefecture, is part of a reconstruction project in the wake of the Great East Japan Earthquake. The goal was to regain the lost liveliness of the city and regenerate citizen interaction by creating an activity base with multiple functions including a library offering a lifelong learning program, childcare support, museum among others in the center of the city that was severely damaged by the earthquake. Floor slabs were divided into small sections, stacked to form an incremental setback on the site facing a historic main street, while much attention was paid not to distract the neighboring houses.

Many terraces resulting from the floor setbacks provide places where people can engage in various activities while overlooking the city, and the void created on the inside connects each floor sectionally and visually. The first floor, which serves as the main entrance to the facility, is a sloped space connecting the 2.5-meter difference in elevation of the site, where a waiting area, cafe, and event space are provided in the open atmosphere seamlessly connected with the hilly city of Sukagawa.

“Through a series of citizen workshops, we aimed to create an organic architecture transcending functional boundaries. We created various spaces for people to stay, including a bright socializing space, a quiet reading corner, a three-dimensional play space, a space under the eaves like an engawa (a wooden veranda along the edges of a traditional Japanese dwelling) among others, and place books throughout the facility.  The upper floors are connected by gentle slopes and stairs, and you can walk around the entire building as if taking a walk around the city,” as stated in a press release.