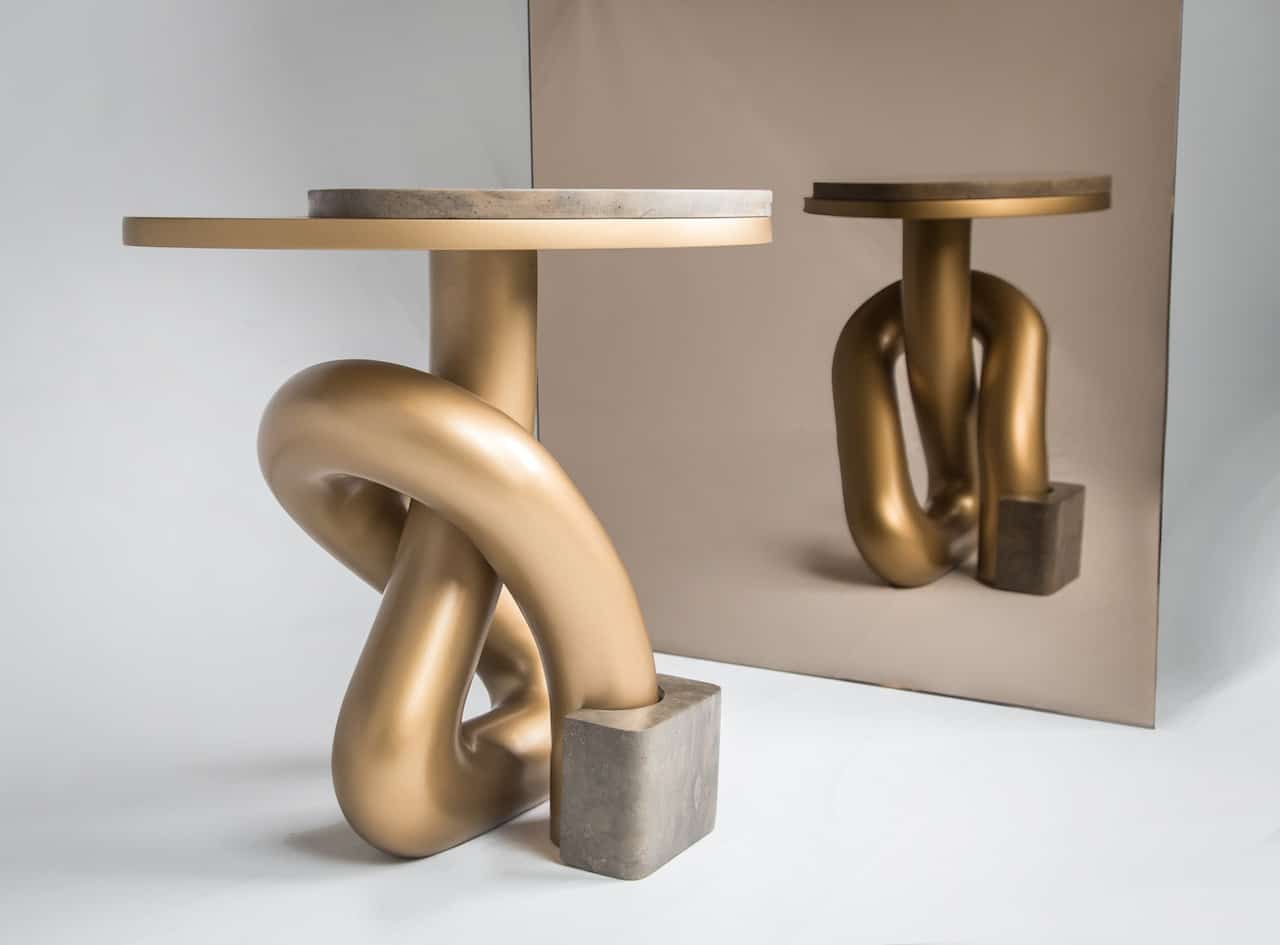 September 2019—The third edition of the Beirut Design Fair demonstrated the diversity of present-day Lebanese design and increasing national pride through the promotion of local products. Beirut’s position at a crossroads between East and West, hosting numerous migrant and refugee populations, results in the adaptation of international crafts and patterns to an evolving Lebanese contemporary style.

For Nada Debs, who spoke to ArchiExpo e-Magazine during the event, Lebanese culture in the recent past valued imported goods over local ones. She would like to demonstrate that luxury can be made locally. Debs, who is Lebanese, grew up in Japan and both cultures inspire her work.

“My designs combine the zen, less-is-more philosophy of Japan with the excess of the Middle East.”

She collaborated with illustrator and fashion designer Salim Azzam for the new Patterns in Nature collection. Azzam created an embroidery inspired bird and flower motif that adorns the collection’s wooden table tops and cabinet doors. He grew up in a small village in Lebanon’s Chouf mountains where embroidery is an important part of the culture. He and Debs aim to design modern products that help revive the aesthetic of traditional Lebanese craft.

French architect Guillaume Crédoz and Lebanese ceramicist Souraya Haddad, a couple presenting their work at their separate booths, also contribute to Lebanon’s multiculturalism. Prior to making Lebanon their home, the couple had lived in Syria but left to flee the civil war.

ArchiExpo e-Magazine had the opportunity to speak with Crédoz about prototyping eco-friendly products with his architecture and design studio Bits to Atoms. According to Crédoz, concrete is Lebanon’s only raw material, which means that designing products made from locally sourced components may take imagination. The Power of the Nap Addicts (POTNA) lounge, displayed at the fair, is made with leftover wood scraps from construction sites in Lebanon and recycled aluminum pans. Because wood has a tendency to swell outdoors, the aluminum frame of POTNA allows room for the wooden slats to slide and adjust to a new position rather than causing breakage.

The Bits to Atoms booth also featured a large beechwood armchair, La Grande Chaise. The design studio aims to counter the negative environmental impact of importing the raw materials when necessary by designing a lightweight armchair which allows for low-carbon post-production transport. They use generative design, applying 3D modeling to understand the piece’s inner forces and create the thinnest shell possible.

Souraya Haddad studied architecture at ALBA (Académie libanaise de beaux-arts) and landscape architecture in Montréal, Canada, where she also studied ceramics. She has lived and worked in Montréal and Istanbul. She moved with her husband to Damas, Syria, and, six months later, the war broke out. They have been living in Lebanon since 2011. Haddad currently imports her material from the US because there are no materials from Lebanon that can be heated to the high temperature necessary to make ceramics.

“My goal in the near future is to concentrate on local materials for both economic and environmental reasons,” she told ArchiExpo e-Magazine.

Bits to Atoms isn’t alone in achieving lightweight furniture for more eco-friendly transport. The Anatomy collection by Lebanese architect and designer Roula Salamoun in collaboration with House of Today is surprising in its appearance of delicacy despite being made from concrete. Salamoun molded body parts to create the curving forms of the table and coordinated mirror.

“The hollowed-out table is so thin that it resembles a piece of draping fabric, while the organic curves give it inner stability.

When she created the first collection, she used imported concrete. The design fair proved to be a good networking opportunity because it allowed her to meet a local manufacturer of the smooth concrete used for Anatomy with whom she hopes to collaborate with on future works. She shares the goal with other Lebanon-based designers of moving towards more locally sourced and manufactured products.