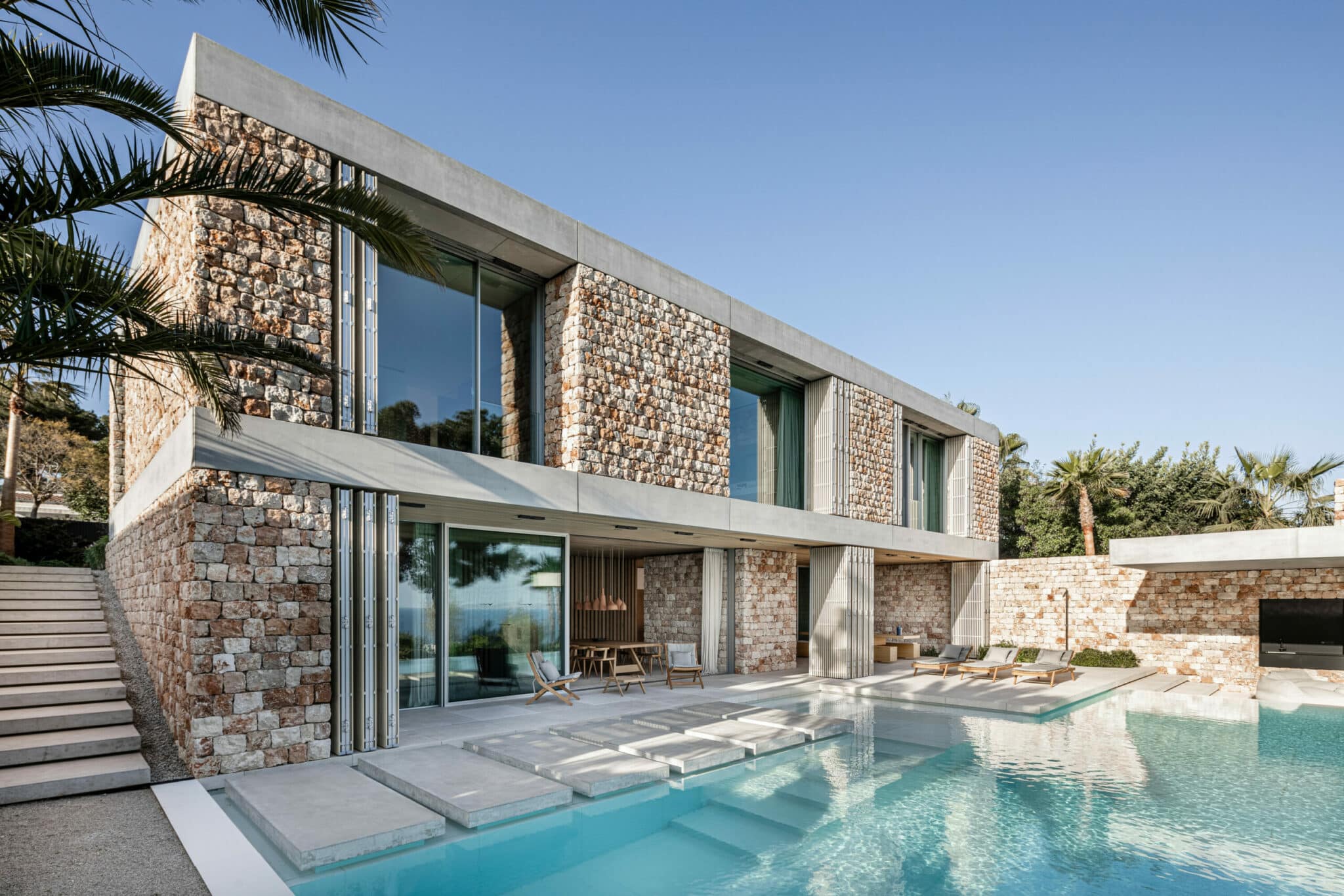 For a first-time building project on Mallorca, Slovakian architects Beef designed a villa that speaks to the island’s heritage through materials and construction, while being energy efficient and contemporary.

Beef architecture was founded in 2004 in Bratislava by Rado Buzinkay and Andrej Ferenčik, and the firm has been working steadily since, with projects in Slovakia, Germany, Austria and Switzerland. Their focus is on using natural, raw materials for texture and creating passive architecture that works with the local climate conditions and landscapes in order to minimize energy output.

In 2017, they received a commission from a client to build a house in Mallorca, “Casa Fly”, an experience that led them to discover the island’s traditional, Mediterranean building techniques, which aligned perfectly with their vision. For Rado, it is important to work with history and know the identity of a place and its heritage in order to create something that fits naturally with its surroundings.  Casa Fly was completed in February 2020, just before the pandemic hit. They are currently finishing their second project on the island, Sa Taronja, a unique property, once the largest chicken farm in Mallorca then turned cultural center and private home.

ArchiExpo e-Magazine: How did the commission for Casa Fly develop?

Beef: We were asked by our client to design his new home on the island. We had already worked for him before, so we knew a lot about his expectations regarding the high quality of the house. But first, we started together to look for the right plot on which to build.

ArchiExpo e-Magazine: Tell us about the location of the house and the land it sits on.

Beef: The plot is situated in a very nice neighborhood with expansive sea views. The community began developing in the 1960s and it is a quiet and established area. The short distance to the capital city of Palma, is certainly a positive, but we found that the best thing about this plot was the four mature pine trees that partially blocked the sea view. Right away, the real estate agent told us the trees can easily be cut down; Our answer to this was that the trees were the best thing on the whole plot!

ArchiExpo e-Magazine: Did the client have a clear vision or were you able to bring in your ideas for a collaboration?

Beef: He gave us just a few suggestions regarding the use of the house. But we started to speak from the very beginning about the qualities of living space, the Mediterranean environment and concluded that we did not want to build a contemporary white villa that has to be air-conditioned for most of the year.

ArchiExpo e-Magazine: In the end, you decided to use the ‘pedra en sec’ (dry-stone) building style – the traditional Mallorcan building technique that has roots going back to pre-historic times. Was this your first time using this technique? What were some of the challenges and discoveries?

Beef: Yes. We came into it a bit like strangers who learned step by step how to understand the Mediterranean landscape with respect to the vernacular architecture. Our design reflects this through its use of traditional techniques and materials, such as stones from a local quarry. The stone facade is based on a typical design that can be found all over the island as a fence or retaining walls that are constructed by using a traditional dry technique ‘pedra en sec’. This local design has been declared an intangible Cultural Heritage of Humanity by UNESCO in 2018. Besides the aesthetics, the massive facade helps to keep the house cool during the summer months and has a great potential for accumulating heat in winter.

ArchiExpo e-Magazine: Tell us about the unique shutter system. This is such an important feature in Spanish homes.

Beef: Adapting the house to the local climate conditions was a critical consideration for us, and therefore it offers a number of natural shade or ventilating systems. First, the windows are pushed inside of the structure in order to create shading out of the concrete slabs. Folding wooden shutters are another natural heat prevention. They reflect the facades of traditional houses in Mallorca. Narrow vertical bands create soft shadows across the interior, which complements the traditional style. The spaces in between the bands allow air circulation even while the shutters are closed. The design proposes natural ventilation, which can be used in small spaces or in the whole house according to current needs. Various window openings on each story allow the fresh air to come in and flow through the house up to the skylights, which provide vertical and horizontal ventilation.

ArchiExpo e-Magazine: What other local materials did you enjoy using?

Beef: For the interior walls we used another traditional material called, “Estuco de cal” (lime stucco). It is lime plaster with a naturally textural surface that was once typical for the older houses on Mallorca.

ArchiExpo e-Magazine: The house is beautifully integrated with the natural surroundings – was it important to use native plants for green spaces and keep it natural and wilder?

Beef: The garden is an integral part of the house. We wanted to create a kind of jungle so that the house will grow together with the surroundings over time. With the help of the local gardener, we used the right plants and trees to realize this idea.

ArchiExpo e-Magazine: What are some of your upcoming projects?

Beef: We are currently working on a renovation project of a former cultural center called “Sa Taronja”, (orange grove) right on the city border of Andratx, in Mallorca. The property includes a main house that is nearly 200 years old and three long rectangular, covered halls that once used to be the biggest chicken farm on the island. The use of these spaces, once used as artist studios and cultural centers, which the property no longer has the rights to do, should soon transform into a sustainable farm.