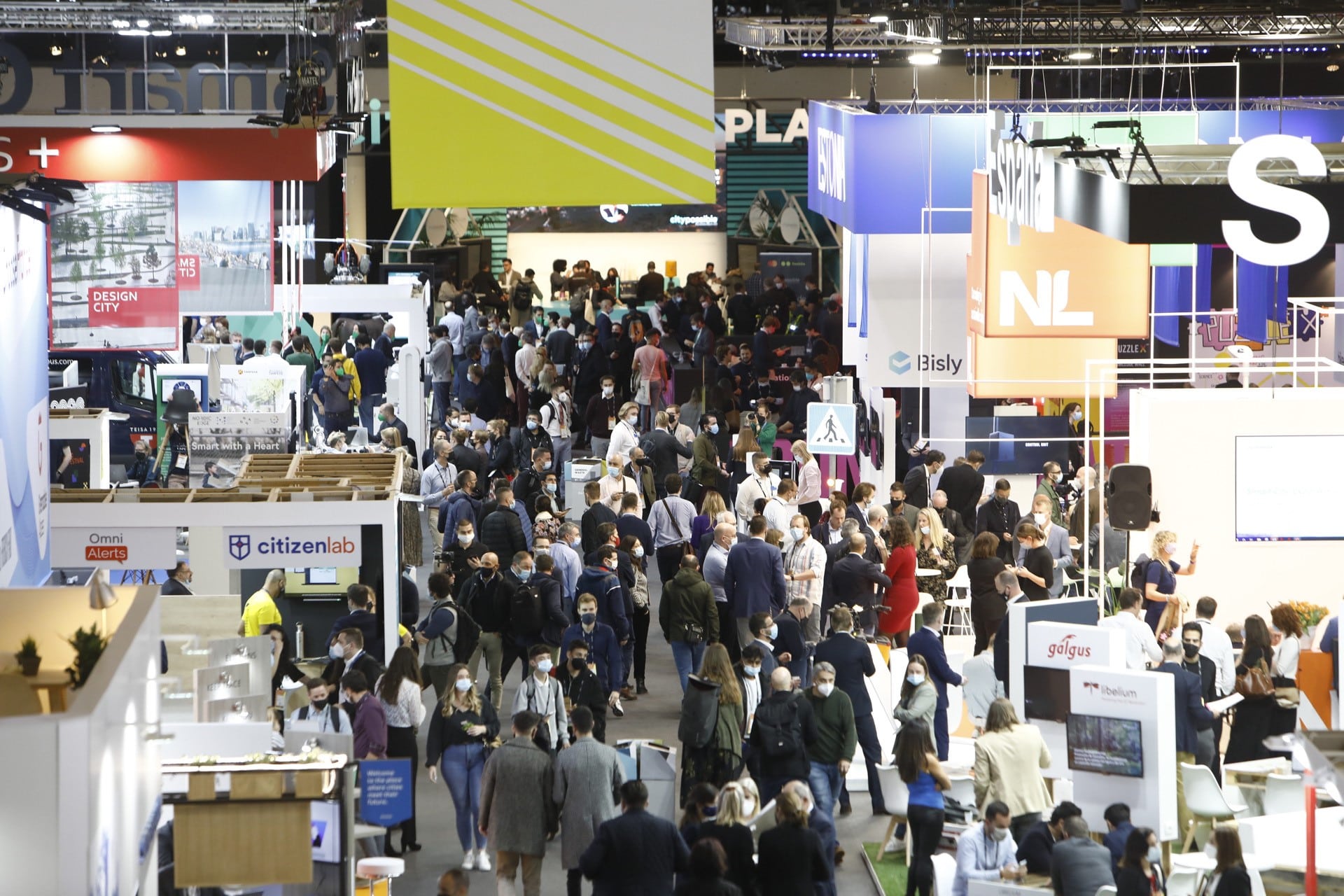 The trend for smart cities continues with the upcoming inauguration of the city’s first public smart building (2022), in the same city as the country’s first urban farm and the largest socio-environmental project.

November 16-18, 2021—The Smart City Expo World Congress held its 10th anniversary in Barcelona, Spain. During the three-day agenda of talks on how to build innovative and sustainable cities, the Vice Mayor of Curitiba, Brazil, presented upcoming and ongoing projects.

Curitiba has a reputation for leading the country in several “firsts”, such as its Bus Rapid Transport (BRT) of 1974. The city has already been selected as the most connected and intelligent city in Brazil. In addition to developing projects such as Fab Labs, urban farms, apps to help citizens navigate the city and innovation hubs including the Vale do Pinhao (Pinhau Valley, the name given to the Innovation Ecosystem of Curitiba), it is promoting the smart city movement by implementing smart solutions. (See Smart Cities and Inclusive Growth, page 12).

In addition to integrating smart, as in connected, solutions, the city has been installing high-capacity sewers to lower environmental impact, a parallel objective to improving daily life for citizens.

In regards to sustainability and urban mobility, the IFDM (FIRJAN Municipal Development Index) noted Curitiba as the most developed city in Brazil in 2012. Last year, Action Fund Brazil – a collaboration between Google.org and ICLEI South America – announced the selection of four innovative initiatives that aim to mitigate greenhouse gas emissions in Curitiba and Porto Alegre.

One project is to install photovoltaic solar panels on the roof of houses in the neighborhood of Caximba, a peripheral region of Curitiba, and the development of an application that will collect the data and make the results available.

During the talk entitled “the latest of green and blue infrastructure”, Eduardo Pimental, the Vice Mayor of Curitiba, Brazil, focused on how infrastructure can be used to drive biodiversity in cities. The remarkable city of Curitiba, referenced as the most intelligent city in South America by Pimentel, captured the audience’s attention.

In the peripheric of Curitiba, in a location named Caximba, the city is developing what it hopes to become, in three years’ time, the smartest district in the world. The official name of the project is Bairro Novo da Caximba. Since 2017, the city has set out to reorganize the villages in the Caximba area and transform the site of the old dump into a new ecological neighborhood in Curitiba. The restoration of this district represents a socio-environmental project for an entire community with 30,000 people, living under difficult circumstances. (See Smart Cities and Inclusive Growth, page 12).

“We are the most ecological city in Brazil,” Pimentel said during the conference.

Indeed, the city previously won the UN Prize for its recycling innovative scheme as well as the Sustainable Transport Award in Washington and the Globe Sustainable City Award in Sweden (2010).

In addition to installing photovoltaic solar panels on the houses in the Caximba neighborhood, the project will guarantee decent housing and sustainable urbanization, with transport and leisure infrastructure and the implementation of a large linear park for the conservation of the APA at the meeting point of the Barigui and Iguaçu river basins, in the extreme south of Curitiba. The intervention also includes the construction of a dam to contain floods, a recurrent problem in the daily lives of residents.

The start of physical intervention for the new neighborhood of Caximba was scheduled for the second half of 2021.

“In December, City Hall will start building the Program’s first 788 new housing units, investing R$ 56 million (approximately US$ 10 million). The renovation and expansion of the Professora Joana Raksa Municipal School, which serves 820 students in 29 Elementary School classes, will also be part of this set of works,” said Luiz Fernando Jamur, President of IPPUC, in an email correspondence with ArchiExpo e-Magazine following the event.

The Institute for Research and Urban Planning of Curitiba (IPPUC) is part of the administrative structure of City Hall responsible for urban monitoring and the formulation of urban plans and projects for the city. Some bidding processes were impacted by the COVID-19 pandemic, according to Jamur, with delays in internal procedures.

“But we expect to begin the construction of the first homes in the first quarter of 2022.”

READ all about the project here.

Involved in the clean energy revolution in Brazil, Curitiba will solarize rooftops of buildings and bus terminals owned by the municipality. With support from C40 Cities Finance Facility (CFF), the City is developing a business case for solar photovoltaic (PV) projects on the city’s rooftops, including studies for the installation of rooftop solar panels on the deactivated Caximba Landfill, among other locations.

“City Hall developed a Program called Curitiba Mais Energia and we have already installed PV panels at City Hall Headquarters (Palácio 29 de Março), which began operating in June 2019. There are also panels on the Galeria das Quatro Estações, located at the Botanical Garden, and on the roof of our events’ venue at Barigui Park,” said Marilza do Carmo Oliveira Dias, Secretary of Environment, in an email correspondence with ArchiExpo e-Magazine following the event.

“The city still has several projects that are currently on tender processes, including our Solar Pyramid at the decommissioned Caximba Landfill, at the interstate bus terminal and other four bus terminals.”

Next year, in the Rebouças neighborhood, Curitiba will inaugurate its first public smart building in the city, a self-sufficient innovation center in the old “Rebouças Mill” (Moinho Rebouças). This new “Innovation Mill” will be the first public building in Curitiba with a sustainability certification.

The new projected area is nicknamed “Escher”, for producing an optical effect that refers to the geometric patterns of the Dutch graphic artist Maurits Cornelis Escher (1898-1972). Although the project will see the existing structure is respected, the building will gain four floors. Inside, the floors will be based on a metallic structure in order to guarantee the safety and stability of the building.

Home to the Eurobusiness, a LEED Platinum commercial office building, the first building in the world to earn LEED Zero Water certification, the city would naturally see the Curitiba Innovation Center meet such standards.

The projected structure includes techniques that add innovative, sustainable qualities and methodologies, in line with the global goals for reducing CO2 emissions. Its premise is that of a modern, technological and sustainable building, certified LEED BD+C Platinum level, with energy self-sustainability and zero emissions, a NetZero Building.

The Institute for Research and Urban Planning of Curitiba’s (IPPUC) initial project was carried out by the architects Lisiane Soldateli Vidotto and Paulo França and follows the criteria of the LEED Platinum certifications regarding thermal comfort, natural lighting, rainwater harvesting, waste generation in the construction process and the use of solar power.

The total area of the Escher is 2,179 m² distributed over five floors plus the terrace. The structure will have an auditorium with 70 seats, two spaces for events and exhibitions, public coworking spaces, Fab-Labs and startups, bathrooms, and a circulation area. The site will have the capacity to hold 170 workstations in coworking environments.

The executive projects for the renovation will be completed in December this year and the bidding for the works published in early 2022.