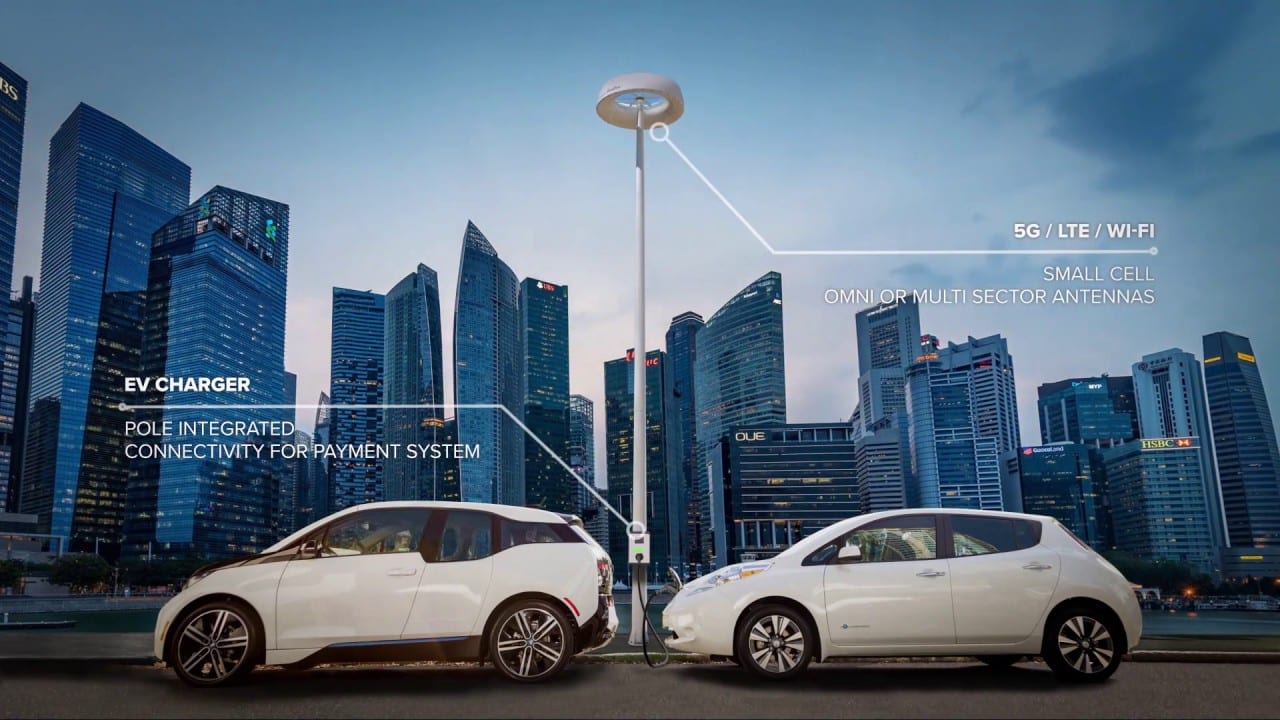 Public IoT technology has existed for a while now, densifying urban networks and realizing optimal resource utilization. With commercial drones gaining recognition in the robotics space, Omniflow has partnered with FlytBase to create scalable highways for drone service providers by retrofitting a drone charging hub to their sustainable smart poles.

One of the main objectives of these modern technologies is to optimize the use of resources. However, most public lighting systems today use a 20-year-old technology and consume electricity in an inefficient and unsustainable way.

It is estimated that a street light is responsible for 13 tonnes of annual CO2 emissions. This excessive consumption of electricity due to outdated technologies is a problem because of its harmful impact on the environment, for example when electricity is generated by burning fossil fuels. To address this problem, Omniflow has developed Omnile, a multifunctional lighting solution that transforms traditional street lamps into smart poles with ultra-efficient LEDs, IP cameras, high-quality public address systems, LTE small cell connectivity, public Wi-Fi, grid operation, battery storage, and many other features powered by renewable energy and carbon-conscious technologies.

Their vision and business model focus on achieving an environmentally friendly world by digitizing existing infrastructure and avoiding the costly and resource-intensive process of reprocessing and deploying products with limited functionality. The development of smart electricity pylons will improve the accessibility of 5G connectivity and other key digital services such as charging electric vehicles around the world. Today, Omniflow operates with thousands of installed devices in more than 30 countries worldwide.

Its primary markets include the UK, the EU, the US, the MENA region and South East Asia, which are gaining considerable traction.

Omniflow worked with Flytbase to implement an integrated software solution that enables drones to perform autonomous functions such as landing and take-off, as well as carry out pre-flight and after-flight checks. One of the key features of the solution is its precision landing module, which uses computer vision technology and landing algorithms to align the landing approach and land the drone on time. Because their smart electricity pylons are connected to the cloud and equipped with edge computing capabilities, they can install smart charging stations on such drones that can be used for a variety of applications, including security, public safety, deployment and emergency response. Flytnow’s intuitive and modular software solution can be used to plan repeatable missions and set up fail-safe actions to trigger emergencies.

Silicon Valley start-up Flytbase, founded in 2016, is building the world’s first Internet of Drone (IOD) platform to provide drone software solutions to automate and scale drone operations. The company’s offering is compatible with all major drone hardware platforms such as DJI, Ardupilot and PX4 and offers SDKs, simulators and APIs for reliable testing and seamless integration. The company is part of the Cisco Accelerator program and was named Grand Champion of the 2019 NTT Datas Global Innovation Contest.

Omniflow was founded in 2012 when its original concept was nominated by Richard Branson for the EDP Innovation Award.

Since 2015, Omniflow has been offering sustainable Smart City solutions with the goal of having a positive impact on the world by reducing CO2 emissions and expanding digitalization. By saving up to 90% on lighting solutions, the company is able to offer value-added services powered by sustainable energy. In the company’s development roadmap, several different technologies will be implemented on a larger scale in cities over the next 5-15 years.