Home » Snøhetta’s Under, a Wave-washed Wonder

Snøhetta’s Under, a Wave-washed Wonder 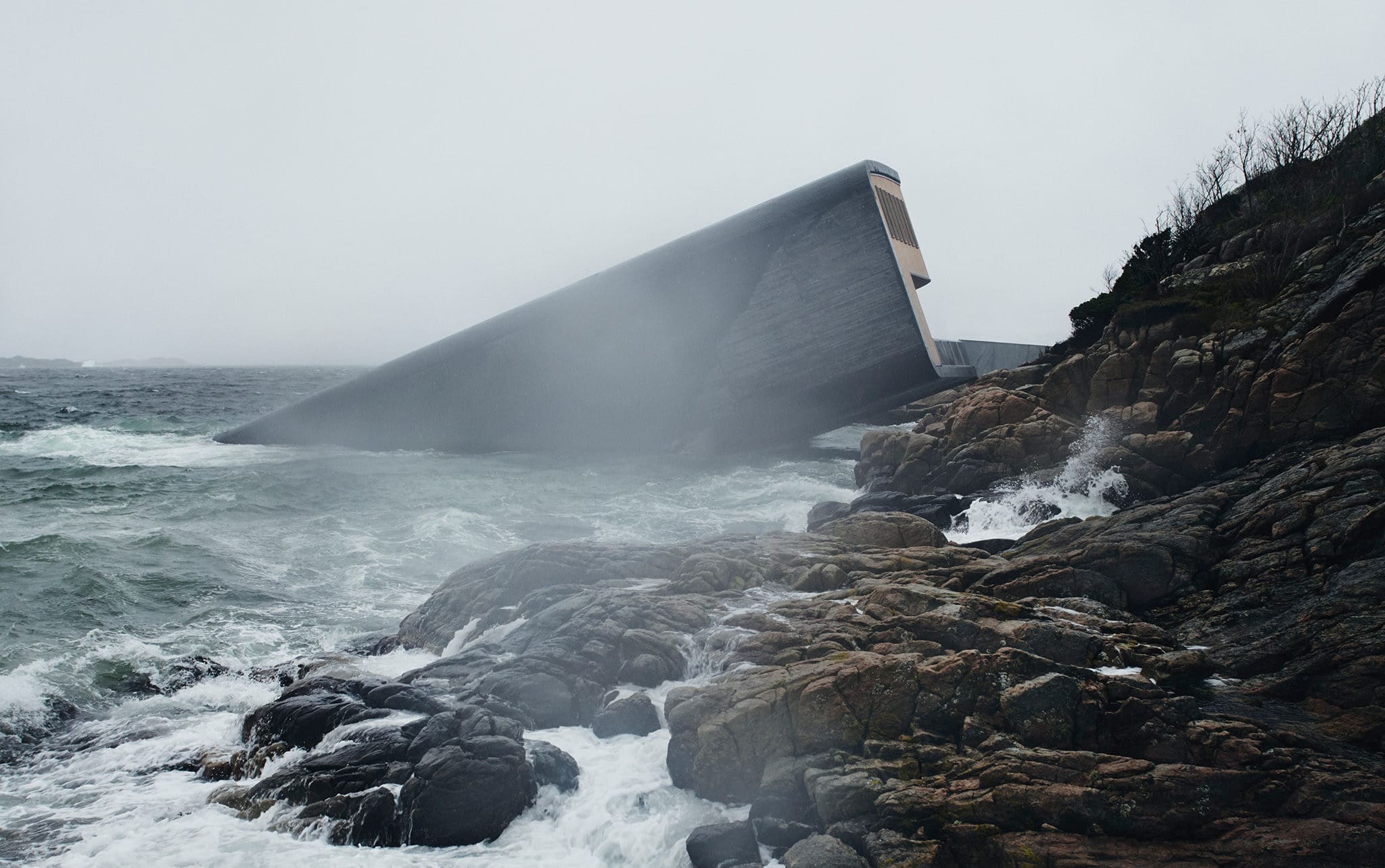 In Norwegian, the word “under” means both “below” and “wonder”. It would be hard to think of a more appropriate name for a new restaurant by Snøhetta, which opened on the coast of Norway’s Lindesnes region in March this year. By semi-submerging a huge concrete block, which rests directly on the seabed five meters below the surface, the Oslo-headquartered design firm has taken daring dining to new depths.

Plunging beneath the waves like a massive periscope, Under is Europe’s first submarine eaterie, with a massive window at the sunken end offering diners an ever-shifting aquatic panorama. Its simple yet rugged form is designed to blend in with the elemental surroundings.

“Snøhetta always seeks to find the best context between function and landscape,” says Under project leader and senior architect Rune Grasdal. “In the case of Under, innovation springs from the need to solve functional challenges with aesthetic solutions.”

Deliberately located at the exposed, the southernmost tip of Norway, where storms from all points of the compass frequently batter the coastline, Under’s physical environment dictates its exterior form.

“Our largest design challenge by far was the North Sea,” says Grasdal. “The concrete structure was designed in close collaboration with engineers to ensure that it could withstand the roughest weather and the highest waves. Once the shell and acrylic windows were in place, the rest of the building process was less complicated.”

Sheltered from wind and wave by Under’s convex, 500mm thick concrete walls and one-meter-thick acrylic windows, guests who enter the monolithic restaurant find themselves immediately transported into an oasis of calm. The warm-hued, three-tiered interior is the epitome of Scandi-style minimalism, with design elements that emphasize local craftsmanship.

“Apart from the concrete, the materials used were largely sourced or manufactured in the surrounding area,” says Grasdal. “This was to ensure a focus on sustainability, while also connecting the local community to the project.”

As if providing a mesmerizing culinary experience wasn’t enough, Under also doubles up as a research center for marine biology and fish behavior, with cameras and sensors installed on the concrete shell. The same concrete has been left with a rugged texture to encourage the growth of kelp, mollusks and other aquatic life, thereby boosting local biodiversity and the restaurant’s integration with nature. Sustainable architecture at its finest.