Supporting New Modes of Learning Through Architecture at Parkland College 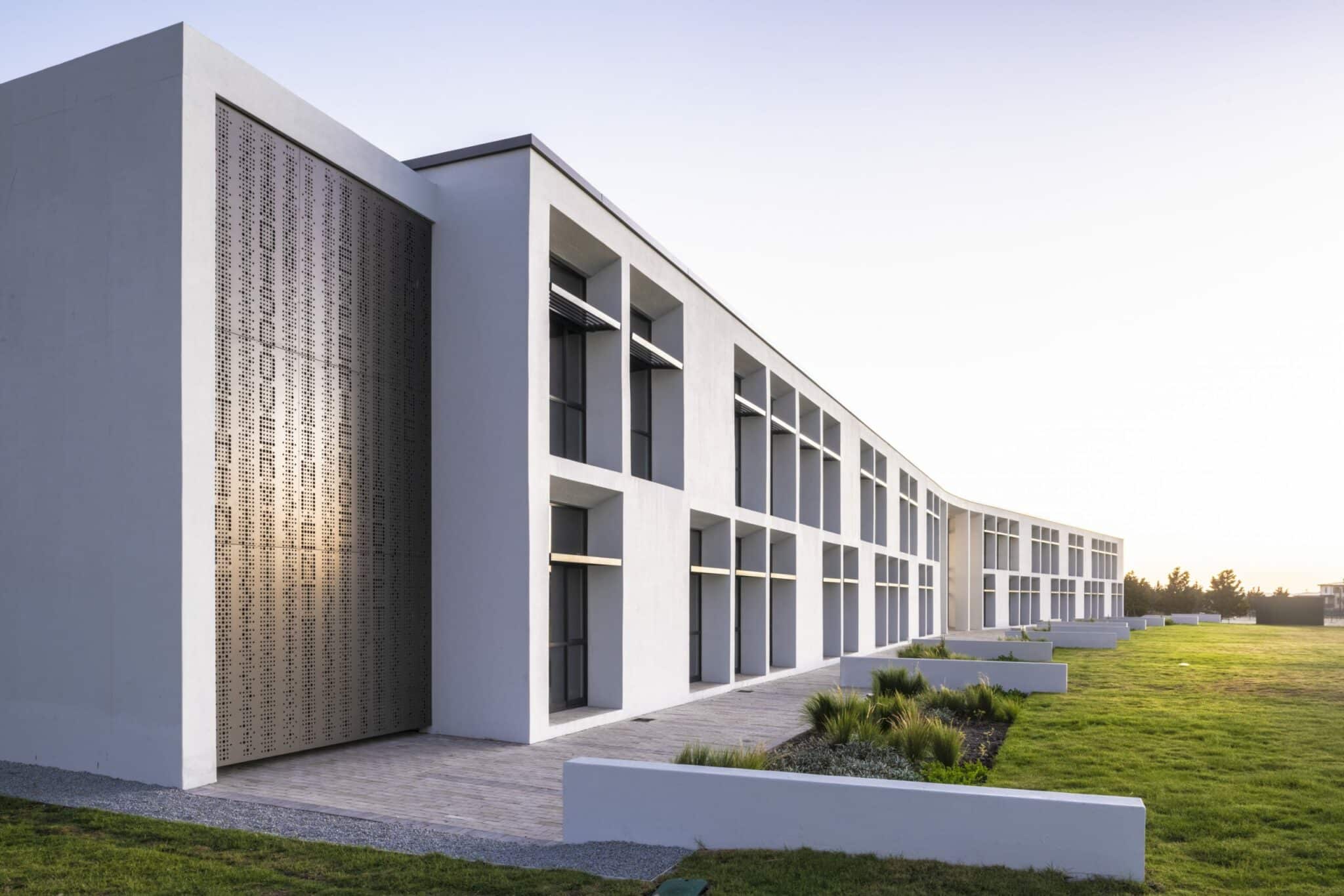 Technological advancements have breeded new ways of accessing and disseminating information, and we’re beginning to see a shift in pedagogy toward collaborative or blended learning. In South Africa, like much of the world, these changes have emerged over the past several years following the involvement of tech companies.

Parklands College in Cape Town, for example, is an Apple Distinguished School—a program launched by Apple in 1995 to recognize establishments that are using Apple technology to transform teaching and learning—and is considered to be at the “forefront of innovative education techniques in the country” by using Apple and Google technologies.

These methods are meant to develop global competencies and skills in its learners so they can build their own futures. In order to achieve this objective, the architecture and design of the school play an important role. In fact, the college recently expanded its campus to include the Innovation Center which accommodates a variety of technology-based teaching methods.

Commissioned by Parklands College and its development partner Minerton Estates, multidisciplinary design studio dhk Architects worked on designing the Innovative Center project, defined as a substantial addition to the existing campus and dedicated entirely to spaces that facilitate these progressive teaching techniques and philosophies.

The architects needed to create spaces that facilitate group work and classes that combine subjects such as science, technology, engineering and mathematics as well as art-based subjects into creative problem-solving activities. The familiar question of “when will I ever use this in the real world?” will be a distant memory as schools adopt this evolved teaching method.

Parklands College is considered a local leader in the emerging field of robotics, so the architects had to create workshop-style learning spaces to facilitate entrepreneurial- and vocational-based skills training. Furthermore, themes of interconnectivity, transparency and movement were vital to the ethos of the center.

In order to consider the kind of ‘spatial instruments’ to implement which would support such new modes of learning, and to assist in deviating from traditional environments, the architects organized a series of brainstorming sessions with the College and professional team. They tested various configurations, balancing mental stimulation and physical connection with moments of quiet focus or acoustic control.

They decided on clusters of interconnected spaces of varying sizes, often adjacent to or connected by circulation spaces, which have the opportunity to become recreational areas or extensions of the learning environment.

Here is a bit more about the project as explained by dhk Architects:

Facilitating Flow with a Sympathetic Extension

Conceptually, the building was envisioned as two solid rectilinear wings separated by courtyards; the southern wing responding to the College quadrangle and the gently bending northern wing providing a distinctive, striking backdrop to the playing fields. The two wings are simultaneously split and bound together by a large, steel-and-glass double-volume recreational atrium aptly named ‘Grand Central’, which forms the nucleus of the building. Not only does the atrium serve as a central movement hub, but it is also used for activities such as informal gatherings, impromptu performances, self-study and immersive digital experiences.

Overall, the architectural design is contemporary and elegantly simple. It makes a distinct departure from the existing style of the campus buildings, yet remains sympathetic to the overall, orthogonal planning. The form of the building was strongly driven by optimizing spatial relationships while adhering to the basic tenets of good environmental design – particularly internal environmental comfort.

Research has shown that without natural daylight, fresh air, good acoustics, and good thermal comfort, the ability to engage meaningfully and the opportunity for deep learning are compromised (we consider the connection to the outdoors to be equally vital!).

Therefore, the use of brick and concrete for the primary learning spaces which face north and south were driven predominantly by the need for thermal mass to stabilize temperature fluctuations. The north façade was given a playful, modular articulation by creating an irregular pattern using large windows, deep reveals and light shelves. The central atrium, being predominantly a movement and recreational space, was made distinct by the use of steel and glass, shrouded by a bespoke aluminum sunscreen. The building also ‘breathes’ on its own; all the larger rooms are fitted with C0² sensors and automated window opening systems which measure the air quality and automatically open the windows incrementally to optimize it and eliminate the need for air-conditioning. Furthermore, acoustic performance was given significant priority and the specially designed system, integrated with the lighting, is vital to the success of the learning spaces.

Collectively, forming the southern and eastern wings of the building are three large collaboration rooms, each with a series of smaller break-away pods clustered along their flanks. Adjustable and versatile, the rooms are designed to accommodate up to 150 learners but can also be adapted via sliding screens to become two to three smaller learning spaces for 30 to 40 learners. A series of several small breakaway ‘pods’ feed off the larger collaboration rooms and allow learners to engage in smaller groups or quiet self-study. These back onto two inner courtyards which separate them from the northern wing; a string of non-specific classrooms intentionally designed square to ensure that there is no front or back. Two larger workshop-style learning spaces occupy the ground floor of the northern wing and are dubbed the ‘Robotics Lab’ and ‘Experium’ (Maker Space).

The idea is for these spaces to provide learners with opportunities to prototype solutions to real-world problems using digital electronics, design, crafting and building. On the upper level, breakaway pods are expressed as suspended boxes that hover above the courtyards, clutched only by the top and bottom of the concrete walkway. Lastly, a continuous circulation route loops through the entire building in a three-dimensional figure ‘8’ and is actively populated with a variety of incidental ‘hangout moments’. The circulation route was designed to ensure the free movement of large numbers of learners while simultaneously providing visual connections between the building’s various spaces.

Meaning & Innovation Embedded in the Design

Throughout the building, there are several playful details. One is the distinctive, perforated aluminum screen which bathes the atrium in dappled light. The embedded pattern on the screen is a subtle reference to the concept of coding, where holes of different sizes create a sense of openness but also form vertical streams of light spots which reveal words reflecting the ethos of the building – ‘discover’ and ‘innovate’. Additionally, the DNA-inspired pendant light-fittings in the atrium remind learners of the human code within us.

Importantly, these big leaps in flexibility and multi-functionality are made possible not only by the architecture but also through innovative furniture and clever storage which play a significant support role in mode shifting. These include mobile furniture items that can be quickly arranged in various permutations, whether by virtue of lightness or maneuverability courtesy of wheels. This could be storage that doubles as seating or inviting nooks and perches to engage in a variety of different activities. Another example is colorful smart acoustic panels that house screens, Wi-Fi points and other technologies. Increasingly, the need to move, sit, stand, and even lie down and learn, is being facilitated via bar counters, poofs, ottomans, large staircases, and cave-like nooks.

While the pandemic put a pause on the building’s opening year, the new center was praised when learners did return to the campus. The adaptable spaces allowed teachers to increase the floor area of their classrooms to ensure social distancing without needing two classrooms and two teachers for each lesson. Also, the digital connectivity including the green screen breakaway rooms allowed learners to connect easily and stay at a distance from teachers but also remain engaged in the content (and allowed teachers to pre-record lessons). Lastly, all teaching spaces and breakaway rooms have excellent acoustics, natural light and cross ventilation without glare, which made the spaces ideal for using of technology while remaining in collaboration.