The Circle, the Largest LEED Platinum Certified Project in Switzerland 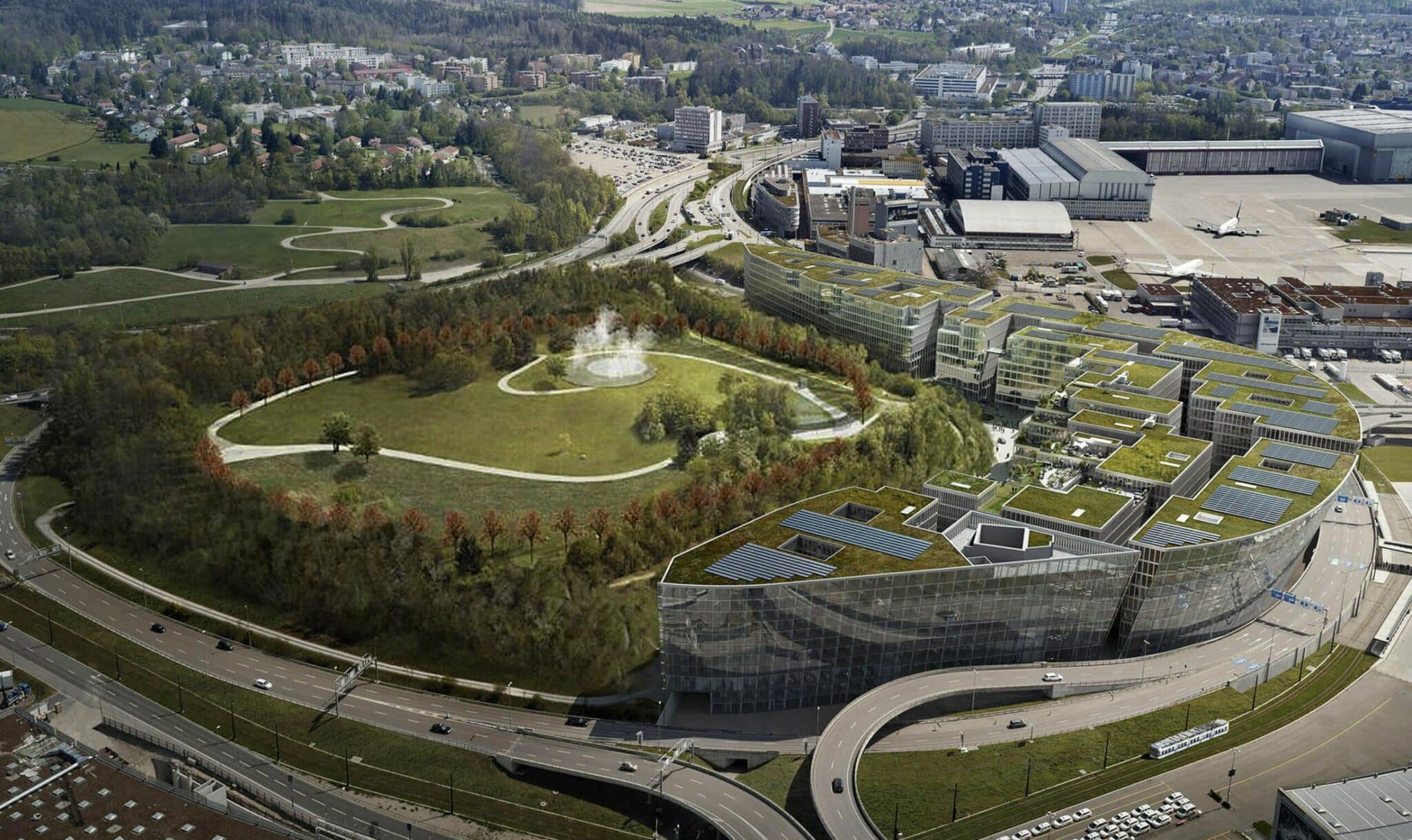 Opened in November 2020, The Circle is a complex with a service and health center, hotel and large park that was constructed in front of the Zurich airport. It’s now entering its second phase of integration.

In early 2009, renowned Japanese architect Riken Yamamoto won the competition to design a high-quality building for services within walking distance of the terminal at Zurich Airport, Switzerland. Since its conception, it earned the LEED® 2009 certification for new buildings for «Core & Shell». It’s the largest LEED® Platinum certified project and the largest to receive the Minergie certification in the country.

“The compact, inner-city atmosphere of Riken Yamamoto & Field Shop’s design was decisive, and it is characterized above all by a high quality of the environment and great flexibility in terms of the building’s life span,” says Elena Stern, spokesperson for Flughafen Zürich AG, co-owner of The Circle along with Swiss Life AG; each holding stakes of 51% and 49% respectively.

Yamamoto wanted to honor the legacy of Swiss design for precision and minimalist aesthetics, while also taking inspiration from the layout of Zürich’s Altstadt (Old Town) for the multifunctionality of its communal spaces. The architect decided to reimagine these areas using new technologies, such as the Closed Cavity Façade (CCF) technology, and construction methods as a way to obtain environmentally sound aspirations.

In terms of sustainability, the project features a rainwater collection system used for toilets, a photovoltaic system installed on the roof and up to 1,000 energy piles that provide heating in the winter. An energy pile can be used for heating and cooling buildings and in some cases for storage of energy (from warm to cold periods). The quadruple glazed façade also contributes to sustainability as the ventilation between the glass panes is an excellent solution in terms of heating and energy.

After more than five years of work, The Circle opened its doors to the public who could access it from inside one of the terminals through a temporary underground passage. Currently, Zürich’s Airport is undergoing a major revamp of its public areas. They’re developing a new connection between the airport and The Circle to replace the underground passage.

Directly connected to the airport terminals, The Circle totals 180,000 m2  and houses a convention center that can accommodate up to 2,500 delegates, two Hyatt hotels, headquarters of international companies, numerous shops, restaurants (including Sablier which offers Switzerland’s largest rooftop terrace), beauty salons, coworking spaces, a gym, a crèche and facilities for medical services – such as a unit of the Universitätsspital Zürich (USZ), the Balgrist University Hospital and various therapy centers. To reinforce the outdoor, open and airy character of the project, there is also a park adjacent to The Circle – and, therefore, also directly linked to the airport itself. All in all; it is safe to say that Flughafen Zürich has transformed from a merely pleasant travel hub into a complete urban center, a multi-purpose destination in itself.

At peak times, there were around 2,500 workers simultaneously active on-site, making it Switzerland’s largest construction project at the time. Around 20,000 truckloads of excavated material had to be removed, 23 cranes temporarily erected, 400,000 tons of concrete and 22,500 tons of steel transported in, 1,340 piles sunk into the ground, 17.5 kilometers of prestressing cable laid, 84,000 square meters of glass façade fitted and 89 elevators installed.

Among the technical challenges faced during this enterprise were the site logistics, as it has only two entrances—one in the north and another in the south—, the building’s automation system and the federal railway tunnel running underneath. Also, the outward-angled glass facade was very difficult to install due to its proximity to the main road, which could only be closed at night. A customized steel structure had to be built around the shell by the roadside to guard against the possible fall of components during installation. The thirty double elements needed for this structure weighed up to 75 tons each and were erected and subsequently taken down again during a total of 60-night closures. But it all paid off in the end: the 3,500 glass elements were installed without any incidents.

Although The Circle is fully operational, the whole of the airport’s revamp project began in November after a pause due to anti-pandemic measures. The work is scheduled to be completed by 2026, including more spacious passenger walkways, new retail spaces and a food hall.

“The qualitative development of Airport Shopping is not intended to compete with the offerings in The Circle but to complement them. The aim is to offer a variety of products and services that provide added value for passengers and visitors,” as Elena explains.

The Circle was paramount in helping Zürich’s airport bounce back after more than two years of anti-pandemic measures. Flughafen Zürich made a 55 million Swiss franc net profit during the first six months of the year – as opposed to a 45 million Swiss franc loss during the same period in 2021. In 2022, the airport expects passenger numbers to reach 22 million by the end of the year. At the present moment, 85% of the rental space in The Circle is in use.