Home » The Kitchen: Should Technology Take a Back Seat?

The Kitchen: Should Technology Take a Back Seat? 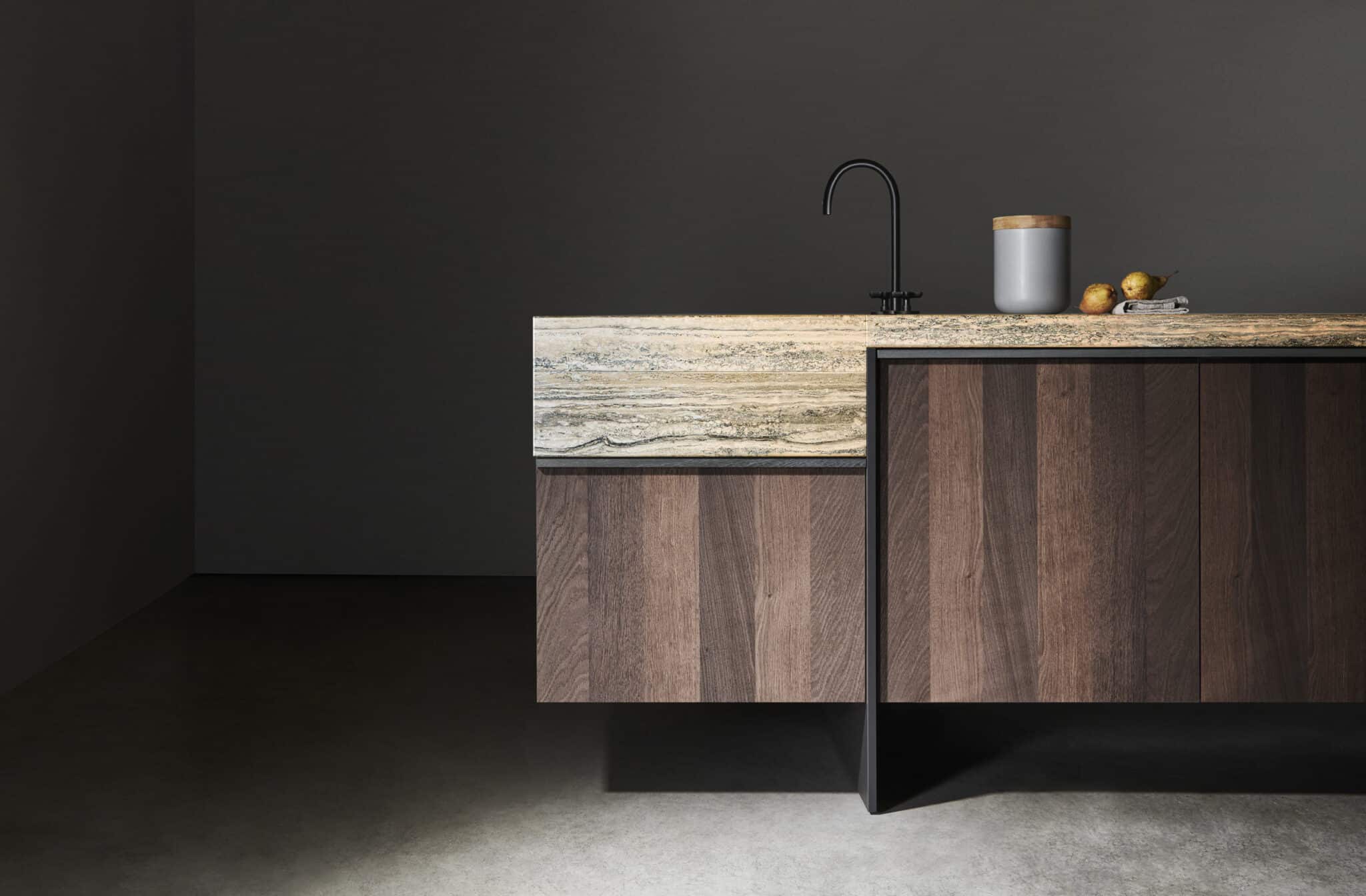 Discover the evolution of the kitchen with brands that combine technology and design for the in-demand efficient and emotional experience of today.

Two years ago Eurocucina and its collateral event FTK showcased the latest innovations in smart kitchen technology, increasingly sought after by consumers. This is one space, however, where technology must drive efficiency and design must reach the heart of those within, whether the kitchen is in a home or a professional setting.

During the event, ArchiExpo e-Magazine spoke to several designers and architects on the concept of technology in regards to their latest furniture to explore the evolution of the kitchen.

Contrasting for Active and Social Users

As consumers become more in tune with their social and ecological responsibilities, companies with such integrated qualities are ahead of the game. Euromobil not only proposes solutions to this need for an efficient and emotional kitchen experience, it offers products that respect nature. It has a wood reuse system, when fabricating its Ecopanels, which releases drastically lower formaldehyde emissions compared to current standards.

Sadler designed the SEI for active users; a ‘real’ kitchen solution dedicated to those who view the kitchen as a place in which to work and live, rather than a mere status symbol. Although he admits that he does not have “the tools to change the rules,” he refers to this collection as an instrument that enables people to play with new ideas.

“I wanted to create a contrast between inexpensive and expensive. I chose an inexpensive, sustainable material as a base but used rich materials on top of it. We never see this and I believe it’s an opportunity for the company, and myself, to write a new page, a starting point for a new way of thinking.”

Sadler researched for a non-trendy material with his material-savvy team; he then combined this with beautiful Italian marble, among other rich materials.

He has worked on a lot of high-tech projects and for this collection, he challenged the selected finishings company to produce a scratch-free and mark-free material; the company had to build a new machine in order to fabricate it. Despite this connection with technology, though, Sadler believes that, when talking about the kitchen, “technology should be in the background, as a tool.”

Still, with a little smile, Sadler did say he would be considering technology such as Artificial Intelligence or future projects.

In a Modern Tech Society—Keep It Seamless

Experienced brands with deep roots and a long history need to remain authentic to the traits for which they are known, but they must also strive for new excellence in today’s modern tech society. Italian brand Snaidero, with more than 70 years of history, exemplifies this demand. The brand exhibited five projects with four different distinguished designers, two of whom agree that technology should be seamless as the kitchen is a place where people should relax and forget about their daily work responsibilities.

Thirty years of collaborating with Snaidero puts Paolo Pininfarina at the forefront of the brand’s identity. His kitchen collection Vision integrates lighting technology into the V-shaped furniture pieces—a “sandwich of metal,” according to Pininfarina. He spoke of this as “an expression of Italian craftsmanship.”

“Technology has to be in the kitchen, but I don’t believe it’s necessary to stress it there. The kitchen needs to be relaxed. It’s more elegant to hide the technology.”

Vision by Pininfarina. Courtesy of Snaidero.

He feels technology should be essential and is not afraid of its integration into design. He said technology is headed in the direction of minimalist design where it is becoming more simplified. The next step, according to Pininfarina, is personalizing the tech-integrated designs.

“Technology will not kill design.”

Similarly, Architects Andreucci & Hoisl said the kitchen should be free of too much high technology. It is a room in which people should feel safe and free to relax. Hoisl thought about it and said:

“There are spaces where technology makes sense, but people are connected every day so in the kitchen it might be too much.”

They presented their Link collection which also has lighting technology integrated into the shelving unit. Link includes a simplified system, a cabinet structure, that can be used for various rooms, not just the kitchen. The main concept is to have the choice to hide certain items, such as an appliance, and to keep beloved items out in the open to create an ambiance or personality. Andreucci explained:

“The kitchen today is where people live. For years, people have been working to make the kitchen more comfortable and adapted to multiple activities. Keeping things hidden away, because we have less space today, let’s us set up our various activities without creating mounds of clutter.”

As Andreucci explained, less space today equates to smaller homes and smaller rooms. Many professionals view this ‘problem’ as an opportunity to generate interesting solutions.

The Milan-based company Stefano Boeri Architetti came up with a kitchen concept for ARAN Cucine: the OASI. This compact island of contrasting materials and colors includes, and hides, absolutely everything. When closed, it’s smooth surfaces become a potential work or play zone in the center of which a beautiful tree can rise.

The sink, refrigerator, washing machine, oven, stovetop, compactor for waste recycling and all other imaginable needs are hidden within this beautiful block-like structure, a “simple single dining table-cooking block,” as described by ARAN Cucine.

The Corian countertop has two symmetrical wings that can come up on opposite sides to create a larger surface, allowing for guests or family members to dine together in ease.

Technology as a Tool for Innovating Materials

When  LAGO debuted its Fusion Kitchen by Daniele Lago, it also presented its XGlass— a new technology for digitally printing the back of the glass. It’s capable of modifying the look of the glass, transforming the surface into other natural elements such as marble. For design customization, it is available in four finishes: Calacatta, Marble Grey, Nero Marquiña, Oxi Bronze.

The Fusion Kitchen offers a modular solution with three compact blocks of contrasting materials that fit together. It can be set as a linear or corner-shaped island or a wall unit. Lago chose Wildwood for the middle component; this aged oak with a three-dimensional grain is adjoined by massive marble blocks.

Outside the fair, in the new Durini Design District, the Ratio kitchen by Belgian architect Vincent van Duysen demonstrated the importance of material and technological research with its innovative metal lattices for the washing and cooking areas. In the Molteni&C/Dada flagship store—designed by Duysen himself—, the Molteni Group’s luxury kitchen brand Dada celebrated yet another well-received collaboration with Duysen. Duysen already won the EDIDA (Elle Deco International Design Awards) in 2017 for his VVD kitchen design for Dada, which was exhibited in Eurocucina in 2016, so this year’s design had the bar set high.

The Ratio by Duysen for Dada is the featured image of this article.

The Kitchen of the Future According to Snarkitecture and Caesarstone

Click here or on the image below to be directed to our article on the exhibition by Snarkitecture for Caesarstone.