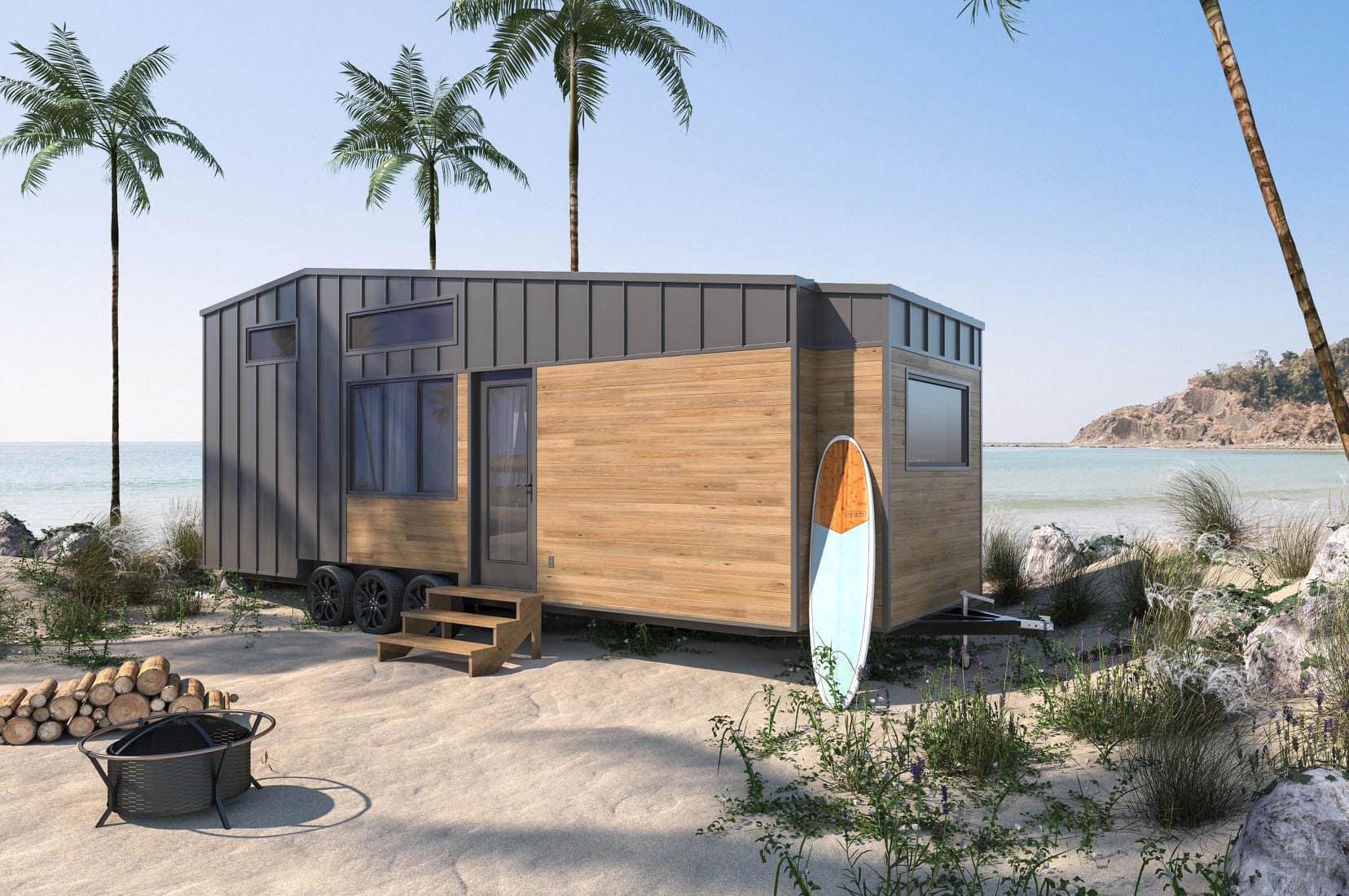 The current tiny houses on wheels movement began in the US but has since been growing in countries around the world. During the Tiny House Conference event, we discovered a number of global projects underway. In this article, we present designs from various international companies as well as community housing solutions.

The virtual Tiny House Conference launched by Portland-based TinyHouse.com ran from March 4 to 7 this year, bringing together international designers, builders and advocates. Through a number of discussions, professionals spoke about past and current projects for individual clients as well as entire communities, including but not limited to Speed House’s largest mobile caravan in the world which won a spot in the Guinness Book of World Record in 1993.

“The tiny house movement itself is not a new concept but has existed on and off for decades. The most recent movement began in 1997 with American Jay Shafer who built one on wheels for his own use,” as stated on TinyHouseTalk.com.

The tiny house is a moveable dwelling suitable for permanent residential use, with self-contained amenities and services and the option to be grid-connected. There are two categories of tiny houses: a Moveable Tiny House which is a transportable structure with the ability to be moved and a Tiny House on Wheels (THOW) which is constructed on a trailer designed to road-legal dimensions and can be moved—houses must be 10-50m².

Popularity and interest in the tiny house movement have increased exponentially over the last few years. Architects, designers and builders continue coming up with unique space-saving and eco-friendly features. Let’s dig into some of the current projects and designs found around the world.

The rate of homeownership has decreased as prices of homes on the market have exploded in many areas. Tiny house communities offer a new opportunity for those of low income or on a budget to own a home while participating in a neighborly environment.

Adrian Giacca recently designed his Micro Home Community project for Revelstoke BC, Canada. The concept is meant to address the increasing cost of housing and the gentrification of the community and can be used as an example for other such places.

A pilot project of MicroHomes is underway thanks to a partnership with Revelstoke Community Housing Society who is proposing to develop it: Eight tiny homes will be built on a shared lot that would normally only have one house for one family. The layout of the homes allows for a communal center space and for an exterior with communal amenities and farming. These co-living communities exemplify affordable homeownership, sustainable lifestyle practices and a renewed connection to people. 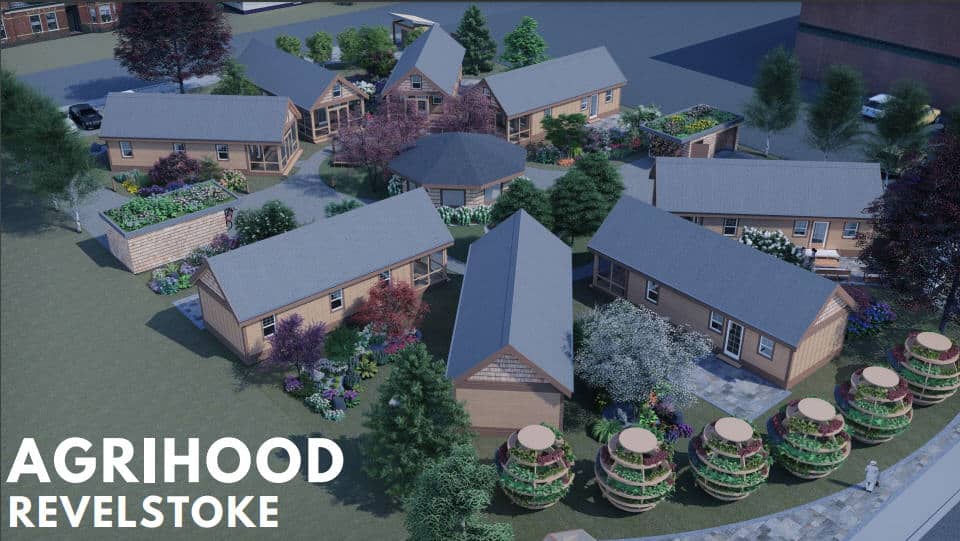 Micro Home Community project for Revelstoke BC, Canada. Click here for more images and information. Courtesy of the designer.

Many are looking to create their own communities in a similar way. During the event, attendees could communicate with each other through a messaging system. We were contacted by Nino and Victoria Gabaldon who are currently developing their own community called New Now Village in the beautiful state of Montana. It’s a sober tiny house community that will create jobs by building and selling upcycled furniture and will provide workshops such as tiny home building classes.

In 2018, five people formed the Australian Tiny House Association in order to overcome the regulatory hurdles preventing citizens from living in tiny homes. Members include builders, dwellers, DIYers and enthusiasts.

“Our mission is to find a national approach through consultations in the tiny house sector and all sectors of government,” said Janine Strachan.

During her presentation, she explained the history of tiny houses in Australia which goes back as far as 1850 when Melbourne’s gold rush created a housing shortage. They started integrating tiny kit homes that came from overseas—prefabricated homes with flat-pack furniture.

“We’re trying to identify a housing solution where people who can’t afford to buy the land. This isn’t new but it’s where we are today,” said Janine Strachan. “Tiny houses can offer an alternative housing solution by helping vulnerable and displaced people while leaving a smaller environmental footprint.”

To give an example, she presented designs by the Australian company Tiny House 2 Go, one of the founding members of the ATHA. 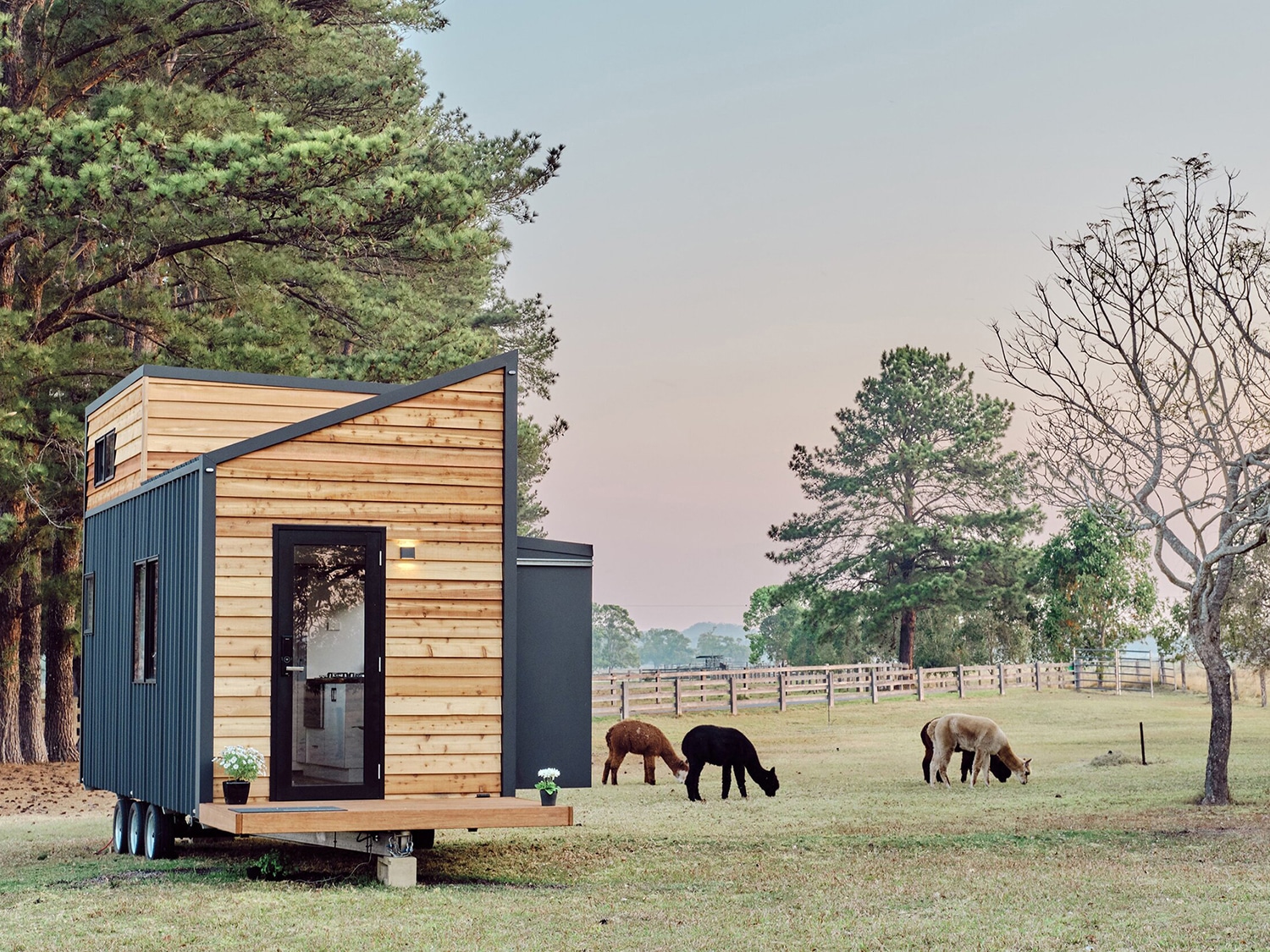 In Lebanon, the movement boosted when, in August 2020, a catastrophic explosion happened in Beirut Harbor. Tiny House Lebanon wanted to facilitate tiny house acquisition by victims of the event, to help provide an alternative housing solution for young Lebanese citizens unable to access property during the country’s dramatic economic situation in which 50% of the population bell below the poverty line.

Yves Ackaouy of Tiny House Lebanon spoke about how land is available but landowners are “majoritarily ‘Not In My Backyard’ minded as they fear the presence of a Tiny House will devalue their property and tend to make Tiny House settlement initiatives difficult.”

He presented an opportunity: The church owns vast stretches of land in Lebanon but Municipalities need to be on board and that is complicated in times of political turmoil. 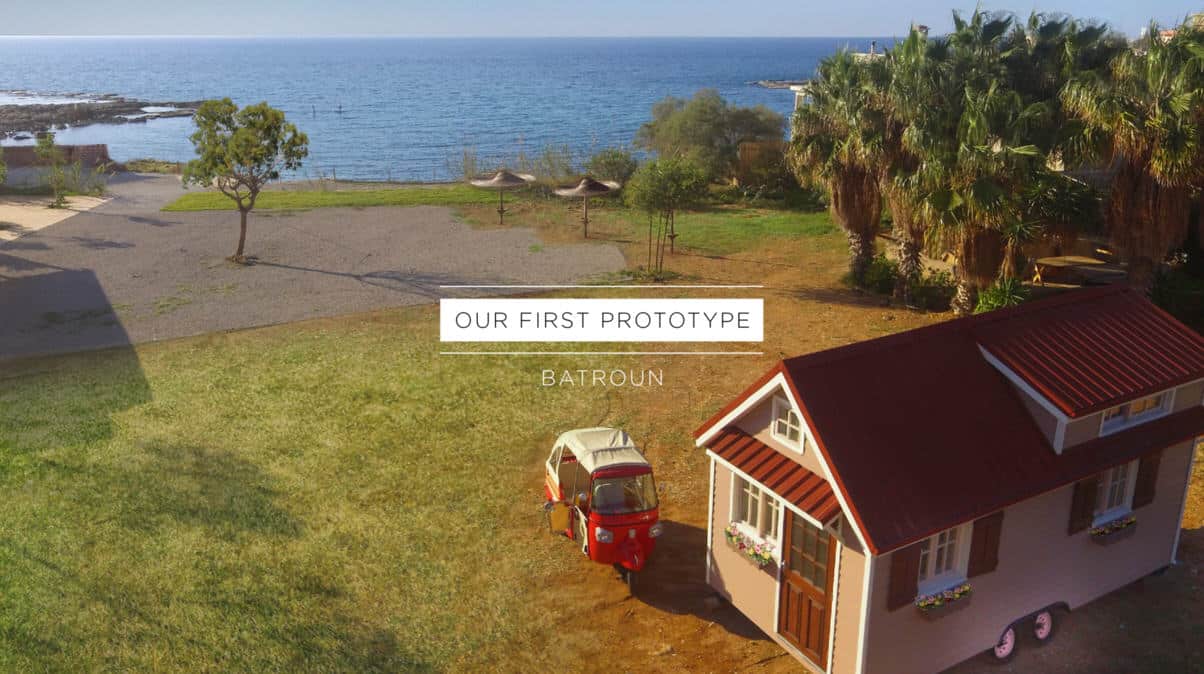 The designers and builders who presented a few layouts of their tiny houses for sale also eagerly gave DIY tips to attendees who wished to build themselves. It’s clear the community is about sharing experiences and expertise.

Peter and Christina Huggler from Indigo River Tiny Homes in Texas gave us a tour of a few of their tiny house designs. They’ve been in construction and home remodeling for 16 years and built their first tiny house in 2009 and their second tiny house in 2017, the latter was built on a trailer from Tumbleweed.

“We have built them on foundation but we no longer do that. Now, we build them on these beautiful Texas-made trailers that we order from some local folks,” said Christina Huggler during their presentation.

They began by showing attendees the most customized tiny house they’ve ever done for a client. One customized house they did had a kitty tunnel to hide the litter. They later shared a video from one of their clients who gives a tour of her tiny home. They sell their plans individually so clients can use local builders to construct the house. Find videos of their houses here.

There were a lot of noteworthy designs shown by companies scattered around the world, including those by Speed House in Dubai—who won a spot in the Guinness Book of World Record as mentioned in the introduction. In addition to tiny house plans, the company also provides glamping solutions. Find videos on their YouTube channel here.

Two industry leaders in the US, tiny house designers Brian Crabb and Vina Lustado discussed some of their design plans and gave some DIY pointers that we cover in a separate article. They’re definitely two go-tos if you’re looking to start designing tiny homes as a professional or simply for yourself. Brian Crabb, who has designed 98 customized tiny homes that have been built with 25 in progress now, has shared his presentation on YouTube. Vina Lustado has lived off the grid since 2013; she has plans for sale and offers phone consultations. 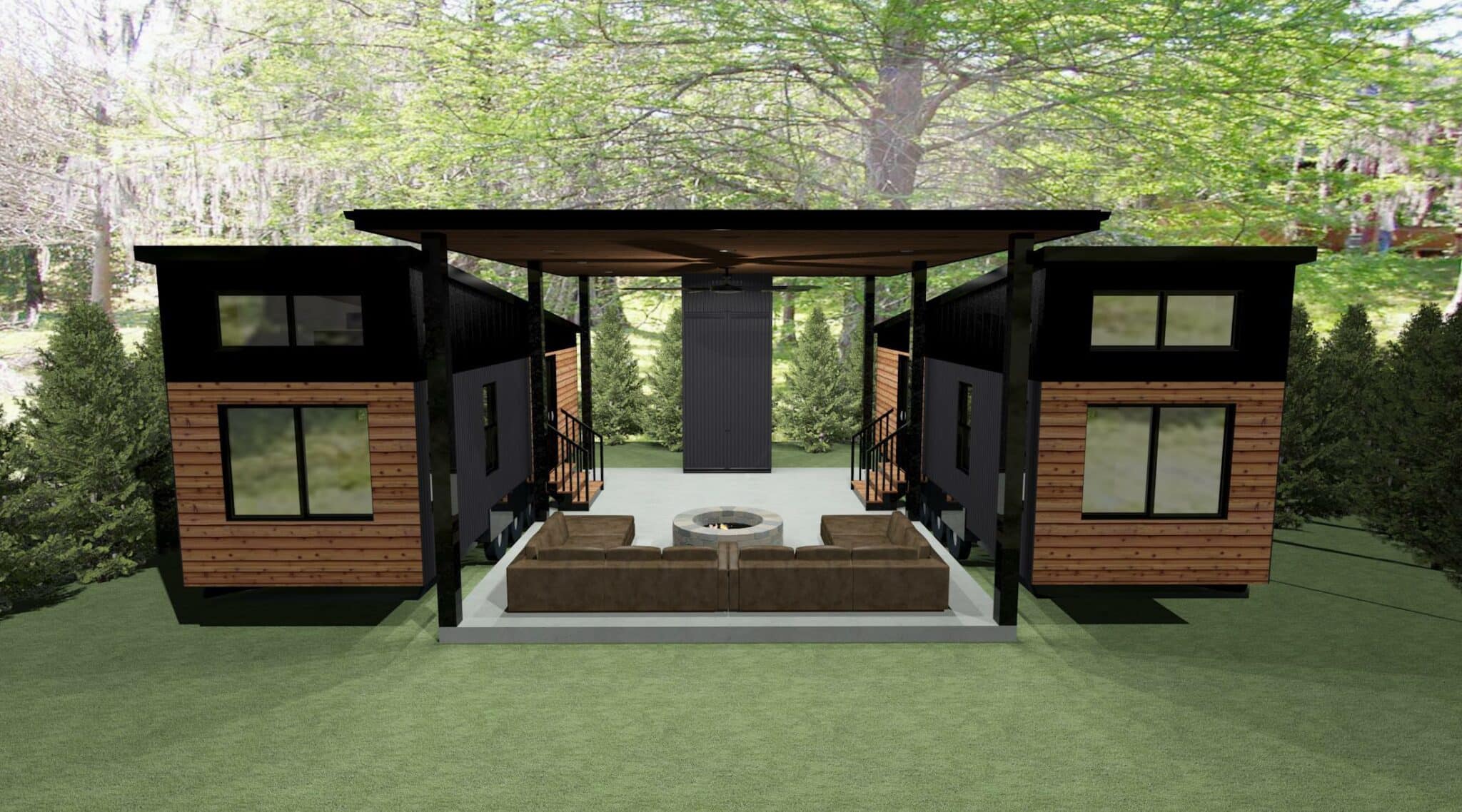 ECI Development is the de facto tiny/eco-home community builder in Latin America. They have developed tiny home communities in Belize, Panama, Nicaragua and are expanding into Mexico. They presented their designs, available for renting, owning or investing.

In France, the movement is at the beginning with only a handful of companies who design and produce tiny houses. Guillaume Gabriele of Ma Petite Maison explained the French mentality and why the concept is misunderstood.

“A lot of people (in France) believe that Tiny House Dwellers are alter-globalists, anti-technology, anti-progress, etc. There are as many threats as there are opportunities and we need to follow the example of the US communities, we need to rationalize the movement and educate people and politics in order to create a positive dynamic,” according to Guillaume Gabriele.

However, the Collectif Tiny House in France helps locate those living in such communities, and Ma Petite Maison has developed a range of products with the best price-quality-environmental impact ratio. 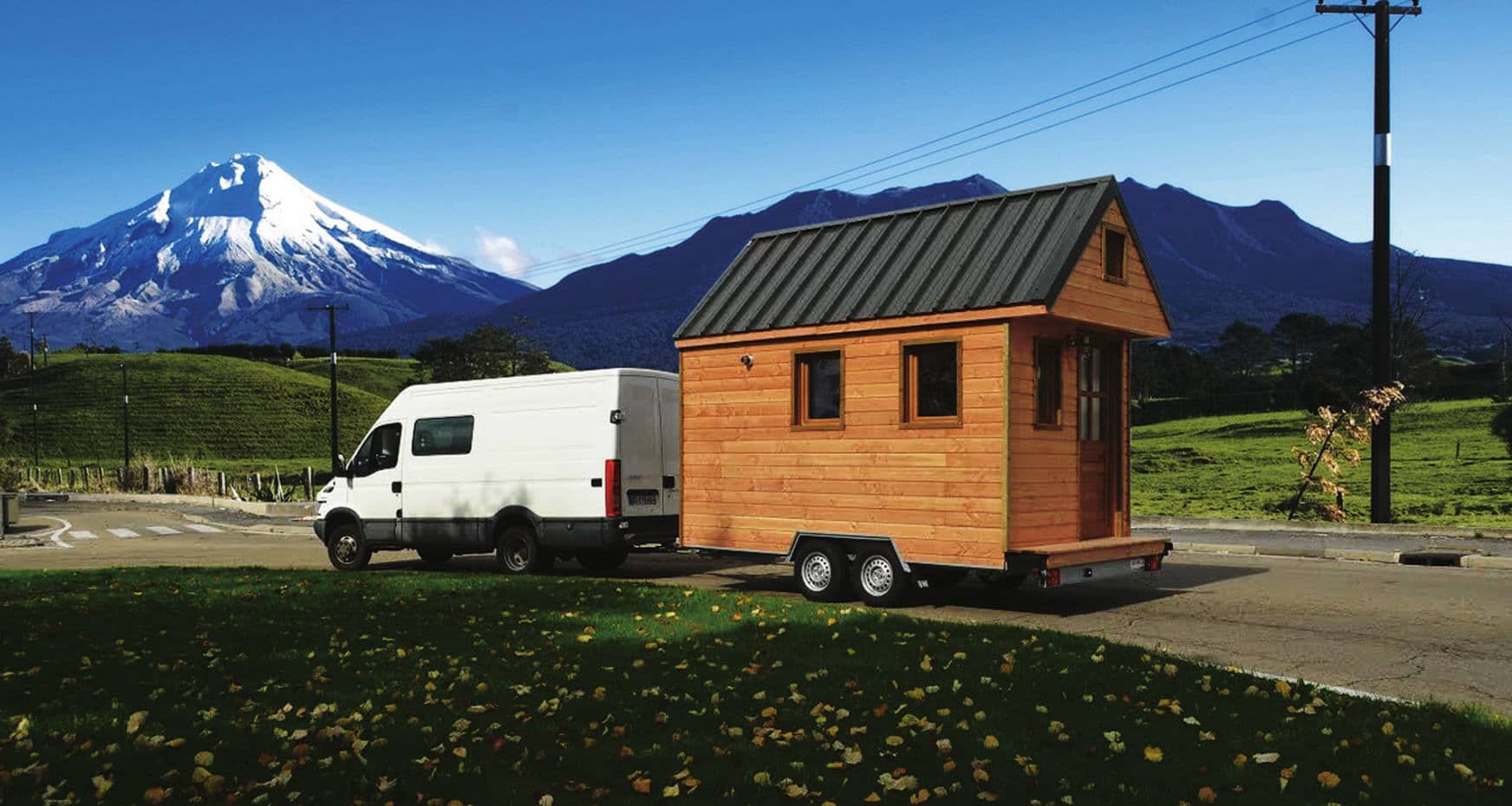