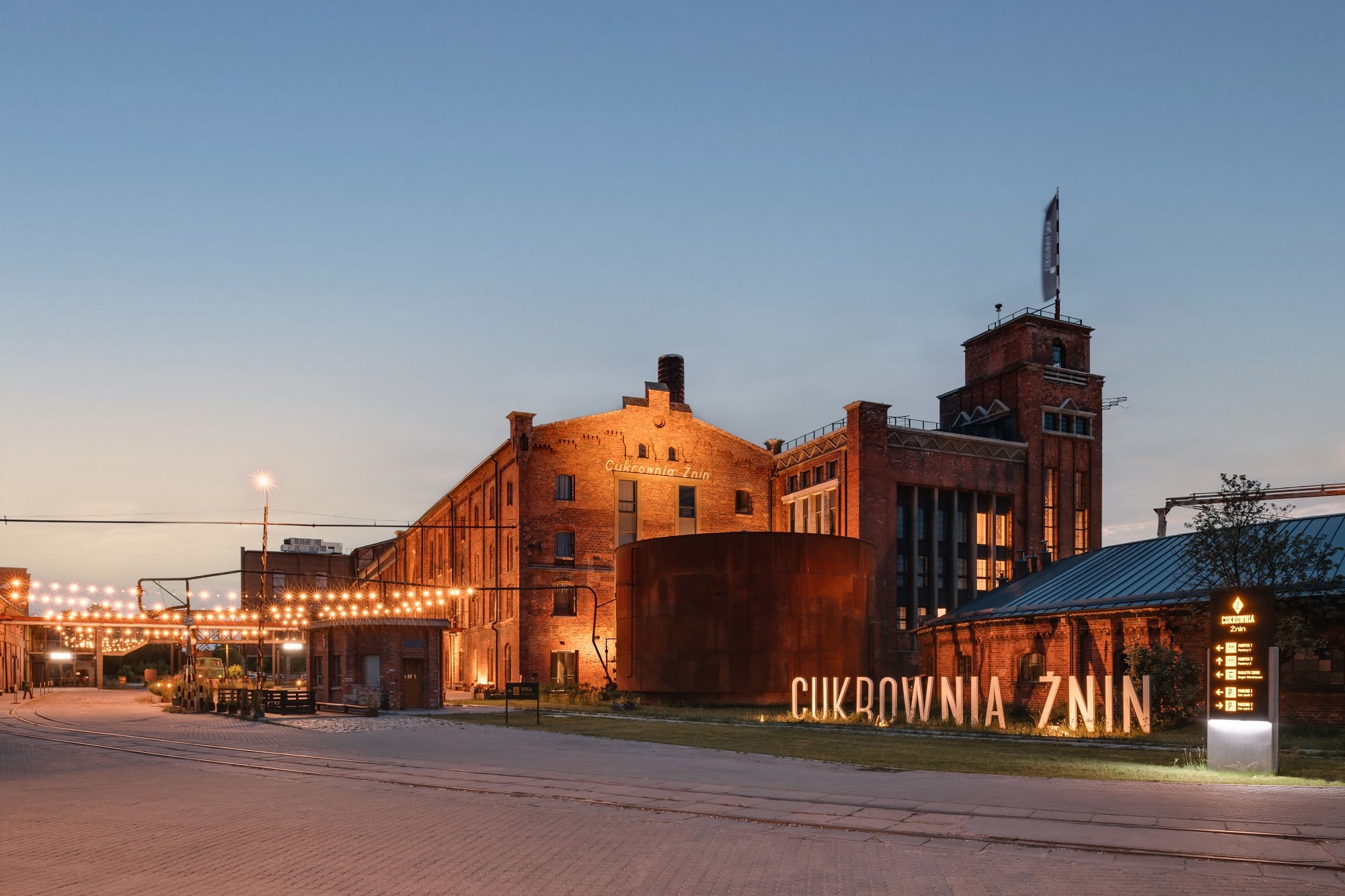 The Warsaw-based architecture firm Bulak Projekt, headed by architect Marek Bulak, is transforming the former sugar factory of Żnin, Poland, into a multi-use complex dedicated to leisure and tourism while also respecting the factory’s long history. The twenty-seven-building site includes two hotels, a conference center that can host up to eight-hundred people, restaurants, bars, a spa, a cinema and an aquapark, with more leisure-dedicated spaces currently being renovated.

The Żnin Sugar Factory was built at the end of the 19th century and operated producing sugar from beets from 1894 until 2004 when industrial restructuring rendered the factory obsolete. As a result, the factory complex was abandoned and designated for demolition by the European Union.

But in 2017, the destiny of the factory changed when its historic collapsing buildings were purchased by ARCHE hotel group. ARCHE, together with Bulak Projekt, MML Architects and MIXD Interior Design created the design for the complex’s renovation and adaptive reuse.

For years prior to its closing, the factory was the largest employer in the region, holding an important place in the lives of the factory workers. For Bulak, it was important to pay respects to this history by preserving as much of the factory complex as possible.

“When we started construction, there was an open day for people from Żnin to come and see what we were planning to do. Some former factory workers were moved even to tears because they were impressed with how we respected their work and their life,” Bulak told ArchExpo e-Magazine in an interview. “Sometimes people said, ‘That was my machine. I worked on this,’” said Bulak.

When ARCHE purchased the factory, demolition had already begun and most of the factory equipment had been removed, but according to Bulak, whatever had been left behind was recycled by the architects and designers and integrated into the new project. Old factory equipment in good condition was left in place, including visible piping on the outside of the building which was landscaped as part of the renovation and has plants growing from them today.

One of Bulak’s favorite features of the old factory building is its high windows with multiple small glass panes. The glass had to be removed but the architects kept the small frames, preserving the effectiveness and aesthetic of the original window. If the equipment was in very bad condition, it was disassembled and used as a design element elsewhere in the complex.

“In the entrance, we reused a tank from the former factory as a planter,” Bulak told ArchiExpo e-Magazine.

While preserving the complex’s original character, the designers and architects also integrated contemporary details, including a red-painted staircase that compliments the building’s brick walls.

According to Bulak, the biggest challenge of the Żnin Sugar Factory project was adapting old materials to new fire-safety standards. It was necessary to better connect the many floors of the factory building to provide more exits, which was done by adding staircases, elevators and ramps.

One of Bulak’s big disappointments came at the beginning of construction when a hurricane struck Żnin. There had been a tall factory chimney that architects had hoped to turn into a viewing deck but most of it was destroyed by the hurricane and re-building it was deemed too costly, so Bulak had to bid adieu to this part of the plan.

ARCHE and Bulak Projekt share a passion for historic buildings and have collaborated on other projects including the renovation of a former palace near Warsaw. They also worked together to convert a former communist-era building as well as a former hospital, both into hotels.

Adaptive reuse projects like these and the Żnin Sugar Factory serve to keep the history of built environments and the people who frequented them alive, as well as limit waste by reusing elements rather than throwing them away.