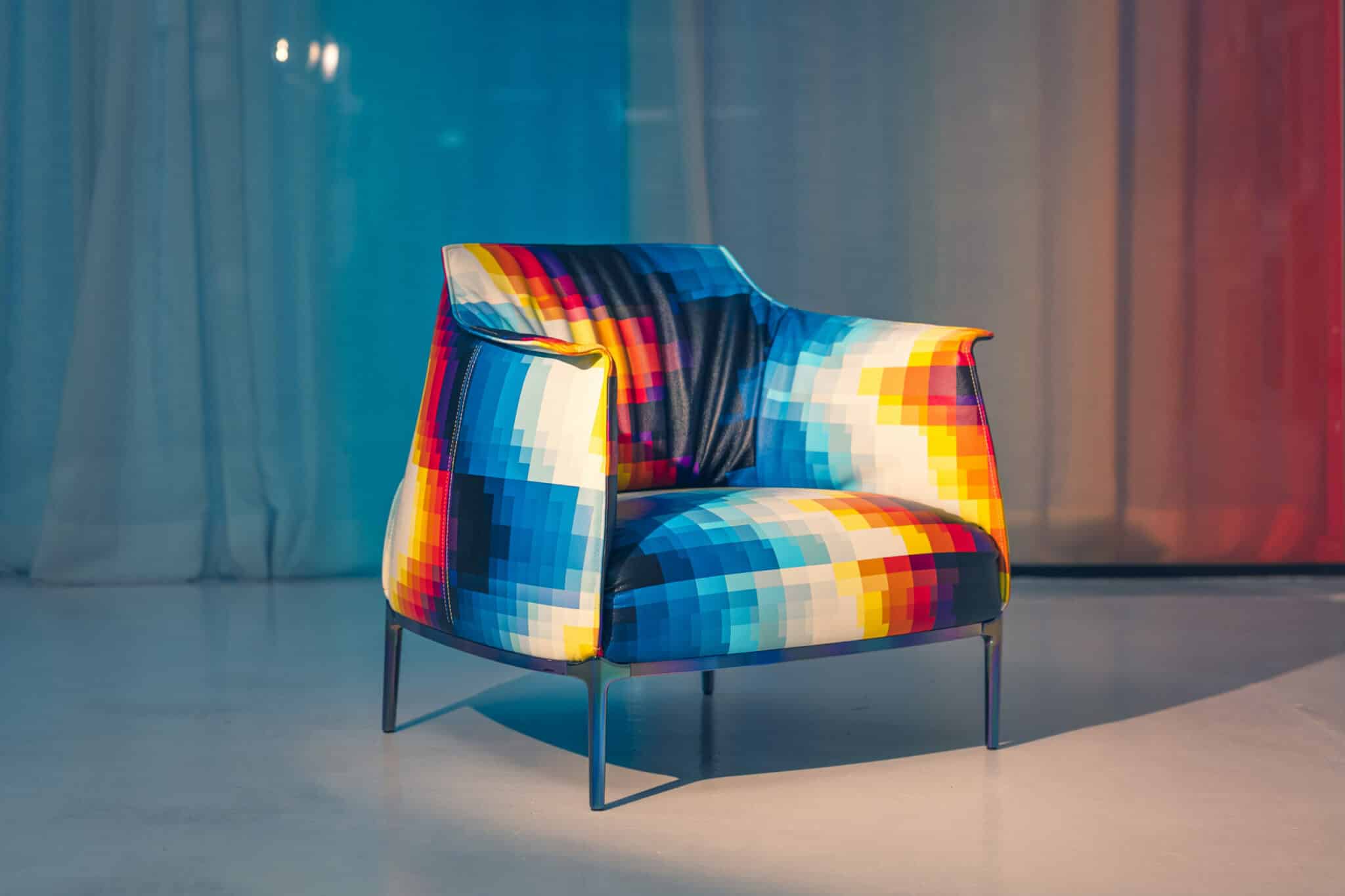 Jean-Marie Massaud first designed the Archibald armchair in 2009 for Italian brand Poltrona Frau, achieving the Wallpaper* Award for “Best Domestic Design” and gaining international recognition for its free play of folds on the inner part of the backrest upholstered in Pelle Frau® leather. Now, to celebrate the brand’s 110th anniversary, the Archibold armchair gets a digitized future with a splash of color from artist Felipe Pantone.

Known for his frescoes, murals, paintings and sculptures, Felipe Pantone has once again pushed the boundaries with art by reviving one of the brand’s most iconic models. Yet, the artist seemed to have his pick of Poltrona Frau objects found in the museum at its headquarters. The Archibald with its minimal frame and iconic status became the base of the artist’s “very loud and very dynamic” work. Inspired by the use of Poltrona Frau’s ColorSphere, Pantone developed a mesmerizing pattern to liven the chair’s leather surface with a gradient grid of reds, oranges, yellows, whites and blues which resemble the cool and warm temperatures of a heat map.

The base and slender metal legs of the chair are finished with Multicolor Natural Chrome, leaving a purplish-blue iridescent finish that shimmers under the light. The gradient pattern is printed directly onto the leather using the same type of production usually reserved for small luxury leather goods—a pioneering printed leather technique developed by Poltrona Frau whose in-depth artisan leather-working knowledge has kept the brand an industry leader for over a century.

The Anniversary Limited Edition Archibald is made from Poltrona Frau’s new Impact Less leather which is chrome-free and uses less and cleaner water; it also further reduces the consumption of chemical components of PFs already sustainable leather, a product of the circular economy.

“An important purpose of this anniversary collaboration is to shift Poltrona Frau’s perspective towards the future — not only in terms of our first collaboration with an international artist of this nature — but also on the theme of environmental protection. The armchair is made with the innovative Impact Less leather that we have developed to further reduce the toll on the environment. We have created a leather that, in addition to prioritizing sustainability, which has always distinguished Pelle Frau, is now even more respectful of the planet in a unique limited edition armchair,” Nicola Coropulis, CEO of Poltrona Frau, declared in a press release.

The 110 pieces of the limited edition represent the 110 years of Poltrona Frau. The limited-edition Archibald armchairs by Felipe Pantone for Poltrona Frau will be available for purchase on the company’s e-commerce channel, flagship stores and select dealers worldwide, following its digital launch in April. Each armchair will come with a custom-made clutch made of Pelle Frau® Impact Less leather, a signed certificate of authenticity as well as a dedicated Pelle Frau® leather cleaning kit. In addition, a hand-made miniature scale model of the armchair in leather will be available for purchase to give fans and followers of both Felipe Pantone and Poltrona Frau an opportunity to own a product of this special collaboration.

Attendees of the Salone del Mobile 2022 event to take place June 7-12 will find a physical installation showcasing Poltrona Frau’s entire 2022 True Evolution Collection, along with a dedicated digital installation featuring the work of Felipe Pantone at the Manzoni flagship showroom.

How Poltrona Frau Has Evolved Through Time

The designer-entrepreneur Lorenzo “Renzo” Frau (1881-1926), of Sardinian origin, founded the Italian high-end furniture brand Poltrona Frau in Turin in 1912. At the beginning of the 20th century, Turin was the cradle of a community dynamic of avant-garde artists, architects, and designers oriented towards art nouveau and the popular artisan artistic movements of London and Paris. It is in this context that Frau created an artisan workshop specializing in high-end leather furniture inspired by the Chesterfield Sofa, a famous classic British sofa. This influence is later evident in a number of the world’s best-selling Art Deco-style designs.

Savina Pisati, Frau’s wife, played an important role during the First World War when she took over the management of the company. Under her leadership, Poltrona Frau achieved worldwide recognition for its quality furniture with sophisticated silhouettes. Around the middle of the century, Poltrona Frau furniture can be found in aristocratic mansions, parliamentary meeting rooms and the most luxurious ocean liners in the world. Among Poltrona Frau’s best-known designs are the 1919 Armchair (also called the 128) and the Vanity Fair Armchair (also called the 904), created in 1930. Both of these models are still in production today. In 1941, Pisati bequeathed the business to his son-in-law, Roberto Canziani. In 1962, under pressure to go bankrupt, sold the company to luxury leather goods magnate and design lover, Franco Moschini of the Nazareno Gabrielli Group.

During the second half of the 20th century and beyond, Poltrona Frau continued to grow and prosper. The company was then a dazzling success thanks to the armchairs of Tito Agnoli, Achille & Pier Giacomo Castiglioni, Gio Ponti, Michele de Lucchi, Sergio Mazza, Enzo Mari, Massimo & Lella Vignelli, and Marco Zanuso. Subsequently, the company developed a new sector of activity dedicated to the automobile market, and to the development of luxury cars for brands such as Ferrari, Maserati and Lancia.

Today, the Poltrona Frau Group remains among the most prestigious design companies in the world, and brings together under its wing other brands such as Gebrüder Thonet Vienna, Cappellini, Cassina, Alias, Nemo Lighting, Ceramica Flaminia, and Fish Design.