During Milan Design Week 2019, visitors couldn’t miss the 8-meter high version of Gaetano Pesce’s chair Maestà Soffrente (Suffering Majesty), presented in Piazza Duomo alongside a series of animal heads made from polystyrene and painted fibreglass and mounted on iron easels. As one of the UP5 & 6 armchairs series produced by B&B Italia, it was designed as a statement concerning the imprisonment of women within a world of male judgement.

Originally released 50 years ago, the Italian designer and architect made no mistake in directly referencing the female-figure by creating an armchair that is voluptuous and figurative in form. While conjuring fertility and womb-like comfort, an ottoman attached to the armchair by a fabricated rope symbolizes a more stinging metaphor: the idea of a ball and chain. Juxtaposing a nurturing sensibility with the experience of bondage becomes a metaphor for the female experience of being imprisoned within patriarchy. Also known as Big Mama, Blow Up, La Mamma, Donna, as well as Up chair, the chair has remained an iconic piece intentionally (and hopefully!) summoning women’s rights.

Also known as Big Mama, Blow Up, La Mamma, Donna, as well as Up chair, the chair has remained an iconic piece.

A time of change floats in the air as information moves like rapidfire forcing society to confront what has been acceptable treatment for minority groups and the planet alike; a current shifting of the status-quo is at play. Therefore, it is no surprise that a feminist, iconic armchair that was designed in 1969 (a time of great political upheaval and revolution around the world for women’s rights, labor rights and civil rights) made its way to the spotlight once again to remind spectators that certain issues have not resolved themselves. 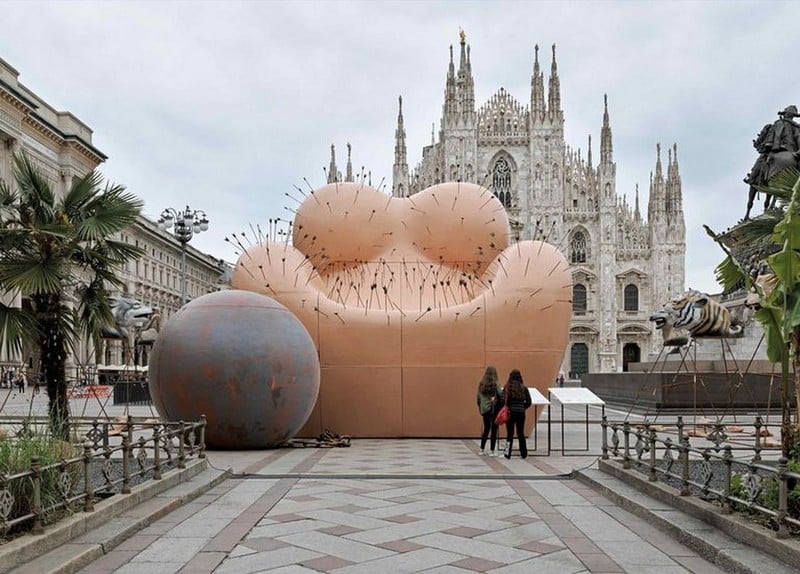 Gaetano Pesce fights against the patriarchy at Milan Design Week 2019.

However, this time around, Mr. Pesce has decided that an even more charged issue should be demonstrated. Standing up for violence against women, several needles were installed in the armchair and ottoman sticking out vertically. Not a comfortable sight, the statement confronts an unpleasant reality that needs to be recognized and dealt with. As an enormous and unavoidable work a the fair, spectators were bound to consider the intended meaning. Although meant to stand with women and stand against violence, many feminist groups still considered this gesture to merely represent women as weak victims, thus maintaining the unending patriarchy and brutality against women embedded in Italian culture. It has been noted, though, only last year by various media outlets, that violence against women in Italy—and Europe—remains a major issue.

In 2018, Italics Mag stated that “The statistics are clear: the number of abuses against women, especially those committed by family members, increased over the last two years.” In November 2018, Deputy Premier and Interior Minister Matteo Salvini stated that “Legislative reform is needed to tackle violence against women in Italy,” announcing that he was proposing the introduction of a new warning system under which reports of stalking and violence on women would be given “code red” priority status, according to Italy’s The Local.

Needless to say, designers, architects and enthusiasts alike recognize that aesthetics can be used as a tool for political thought.

Gaetano Pesce was born in 1939 in La Spezia, Italy, and has designed for  B&B Italia (formerly C & B Italia), Vitra, Cassina. Over the years, designer/ architect’s works have tackled the functional, designed object world from a perspective that has been deemed relative to the human experience.