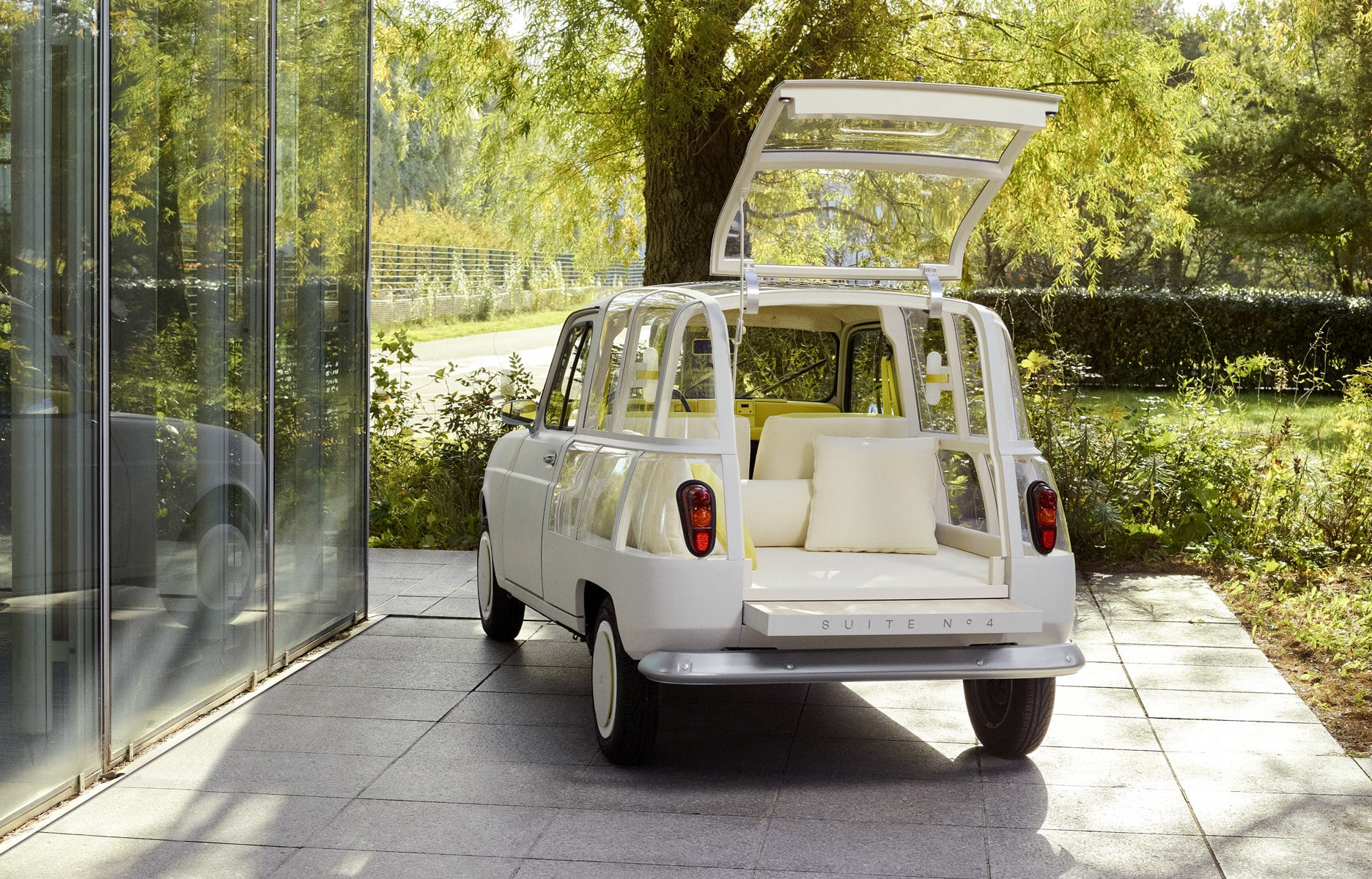 The reinvention of the Renault 4L had us wide-eyed with excitement. This little revolutionary car is bringing back the freedom of the 70s with a modern, ‘post-COVD’ look.

March 24, 2022—During a conference held at Maison&Objet in Paris, designer Mathieu Lehanneur captivated the audience with an expressive description of his latest projects. As the talk was entitled ‘le design prend l’air’, he listed exciting current and upcoming urban products to be used or placed outdoors, including but not limited to our most adored La Suite N°4.

The French designer revisited the pop icon for its 60th birthday, and it couldn’t have come at a better time. While it hasn’t yet reached the market, a detail Lehanneur will not leave alone as he’s impatiently waiting to be the first to buy, we’re hoping to see it listed before the summer arrives. It could be wishful thinking but as the designer said, it’s now we need such a vehicle.

“When we came out of confinement, it was like opening the shutters,” the designer said during the talk, in reference to not only our homes but our lives. “We’ve taken off. We’re no longer enclosed.”

And they really have taken off at his agency, with a showroom opening in New York City next month and their first factory opening next week. In order to reduce the number of middlemen, and to manage the work without being restricted in this way or that by others involved, the designer decided they needed to start manufacturing their own products. They’ll open the factory in France.

As for the Suite N°4 concept car, following its exclusive unveiling on Friday, October 22 at Christie’s, in association with Maison&Objet, it has been on display at the Atelier Renault since November. To create this new automotive experience, where living on the inside and the outside are as one, Mathieu Lehanneur collaborated with the Renault Design Colors and Materials team.

The backside of the car opens to the sky and surrounding environment with its transparent closure, offering the possibility of romantic adventures for those appreciating the nomadic lifestyle of our current time period. While advancing with improved technologies, we’ve been reaching for the best found through history, found in past generations.

“We’ve all made love in a 4L. If you haven’t done that, you’ve wasted your life.”

As a longtime fan of the 4L, Lehanneur appreciated the request made by Renault to work on a concept for the car but had concerns about the project. The brief from Renault was to customize the 4L—exterior color, upholstery for the seats and adjust some interior details. Without making any drastic changes, Lehanneur knew nothing would be happening with the customized 4L.

“The 4L is a platform of expression with an ambition that goes well beyond that of modifying decorative, cosmetic aspects of the car simply to bring it up to date,” Lehanneur said, referring to the discussion between himself and the Renault Group that had taken place at his office.

“We didn’t have much time, only days, but they allowed us to present an idea. I sent them a rough sketch done by hand to convince them. I proposed to mix the collective consciousness of the 4L, meaning the fact that this car isn’t solely about pure functionalism, to get from point A to point B; it was created at a time period when we could park wherever we wanted like on the sand at the beach with a lover. It represents the freedom of the 70s, corresponding with a societal revolution.”

“The 4L carries all this within her. It crosses, today, the concept of the Tiny House in which we live with minimal necessities, often without a building permit, and which allows us to settle in nature or wherever. For Renault and the 4L, we proposed to mix these two universes: reduced architecture with only minimal necessities, a shelter, with the 4L with its philosophy of a distant life.”

The concept car retains the proportions and exterior lines of the iconic model but is radically transformed. The body of the rear part and the tailgate are replaced by a polycarbonate canopy which brings the transparency and brightness of a glass architecture. On the roof, a grid of solar panels allows the sun’s rays to pass transparently and, at the same time, helps to recharge the battery of the retrofitted and now 100% electric vehicle.

On the front face, we find the iconic lights as well as the original lines. The polished aluminum grille is both the designer’s signature and an ode to escape. It is sculpted with waves and gives an effect of fluidity, dynamism and permanent movement to the vehicle.  The designer certainly does love sculpted waves, as we can see in his Liquid Marble and Ocean Memories pieces shown to the audience at Maison&Objet after detailing the DAY, Tender Boat.

“A vehicle is a tiny architectural piece with a rare complexity. The idea with the 4L wasn’t to simply create a sculpture. It needed to be functional so that if we wanted to bring it to market, she’d already have all the necessary elements to be functional as required.”

“Today, the concept car isn’t on the market, but I’m counting on it and I’m not going to give up.”*