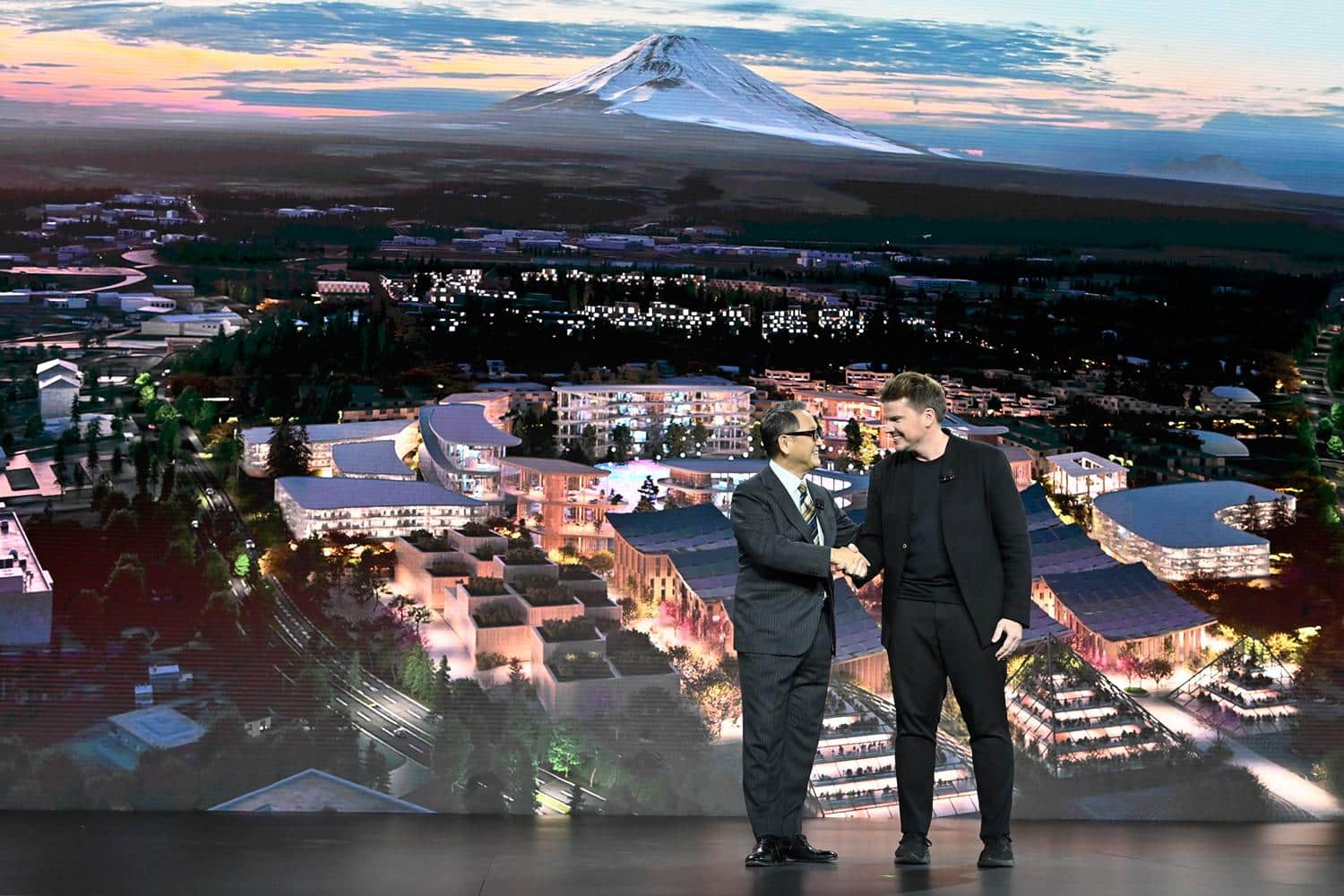 Akio Toyoda, CEO of the Toyota Motor Corporation, with Bjarke Ingels of BIG Architecture during the CES Las Vegas 2020 event. Courtesy of Toyota.

The car manufacturer set to break ground in February 2021 on its smart city prototype Woven City, to be located at the foot of Mount Fuji.

This article has been modified on September 15 to incorporate an interview with the Founder and CEO of Creative Digital Agency on Toyota’s smart city project.

In Higashi-Fuji, Japan, Toyota will build a prototype city of the future where people will live, work, play and participate in a living laboratory. The company designed the urban planning of Woven City as a living laboratory in order to connect people, buildings and vehicles through data and sensors, so that experimentation can take place and help grow the concept of a smart city.

“Imagine a smart city that would allow researchers, engineers and scientists the opportunity to freely test technology such as autonomy, mobility as a service, personal mobility, robotics, smart home connected technology, AI and more, in a real-world environment,” Akio Toyoda, CEO of the Toyota Motor Corporation, said during the CES 2020 event.

It is similar to Toronto’s Alphabet city by Google, except that instead of only four hectares it will cover an area of 70 hectares with enough housing for 2,000 residents.

The manufacturer officially presented its project during the tech trade show CES in Las Vegas earlier this year. It was the first showcase of the project before it was to be inaugurated at the Tokyo 2020 Olympics—now postponed to 2021.

“Asian culture has always been faster in adopting technology like this, but I was surprised it was Toyota. I thought one of the traditional retail shops would initiate such a project, like Japan’s smart grocery stores or cosmetics,” said Jin Kim, Founder and CEO of Creative Digital Agency (CDA), in an interview with ArchiExpo e-Magazine.

READ: The company recently published an article on the future of shopper marketing.

CDA follows the evolving technologies so when the company learned about Toyota’s announcement of its smart city project during CES, it published an article entitled “Toyota’s “Smart City” Heralds a New Era for the Retail Experience”.

“This type of experience has long been overdue so we were thrilled to see someone taking the initiative to make it happen.”

According to Kim, the way Toyota has planned on implementing the smart city experience sets it apart from other smart city projects.

Naturally, the major highlight of the project is the newly configured layout of roads. In the Woven City, roads split into three lanes—one for autonomous vehicles; one for micro-mobility options like biking, scooters and Toyota’s i Walk vehicle; and one plant-filled pathway, with native vegetation and hydroponics, for pedestrians. The lanes weave in and out of one another, hence the name.

Robots and drones will play a big role in the city. By using sensor-based AI, the smart homes use connectivity to assist residents by having the robotics automatically restock the refrigerator or take out the trash and by having drones deliver shipments purchased via online shopping.

The city will be powered by Toyota’s hydrogen fuel cell technology which is said to leave no carbon emissions, and the buildings will be made of carbon-neutral wood combined with the traditional craft of Japanese wood joinery made using new robotic production methods and topped with solar panels on the roof.

“Below ground we find the entire infrastructure of the city,” architect Bjarke Ingels said during the event, “… including… its hydrogen power storage and water filtration systems.”

A “BIG” Name Behind Its Design

“A network for the autonomous delivery of goods also takes place underground, connecting directly to the buildings above,” said Ingels.

Toyota commissioned BIG architecture firm to design Woven City. In the center of the city, Bjarke Ingels designed the central plaza like a town square that rethinks the marketplace or fairground. The Toyota e-Palette, an autonomous vehicle that will serve as shared transportation and mobile retail, helps “create flexible programming in the central plaza.”

“The Toyota e-Palette will also make deliveries to the Research & Development labs which rise above the Central Plaza,” said Ingels.

This mobile retail concept will bring consumers from behind their computers, online shopping at home, and into the city where they can have a digital shopping experience.

“I’m a believer in the digitalization of anything possible but people at the end of the day want interaction,” said Jin Kim. “The craving for physical interaction means it’s helpful for brands to have a physical presence in order to strengthen brand loyalty—to be a part of something that blends the two (digital and physical) well.” 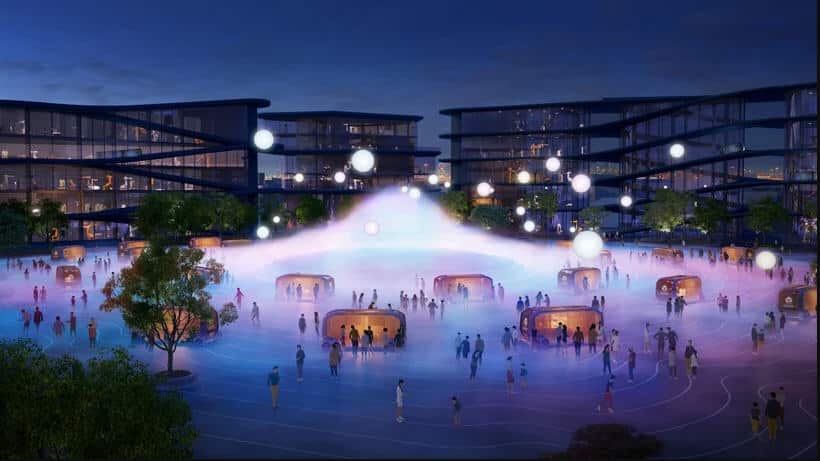 The central plaza becomes a natural meeting place for people as they advance deeper into the age of technology, with online retail taking center stage.

“It’s not like Disneyland, what Toyota is doing. The city is going to be a place where consumers can go and have that interaction,” said Jin Kim.

The idea of human connection and interaction sits at the center of the project. As Ingels said:

“The woven city will explore all kinds of ways to stimulate human interaction in an urban space. After all, human connectivity is the kind of connectivity that triggers wellbeing and happiness, productivity and innovation.”

Although this is a prime example of just how involved architects can be in the development of smart cities; as for retail stores, such as seen with the mobile retail concept by Toyota which transforms the entire idea of a physical shop, it’s not as simple.

According to Jin Kim, it’s a toss-up as to whether it will be the tech company that will embrace architecture or the architect firm that will adopt technology in order to recreate the brick and mortar space, incorporating technology and the right brand image experience.

“It all comes down to who will move faster, learn quicker,” said Jin Kim.