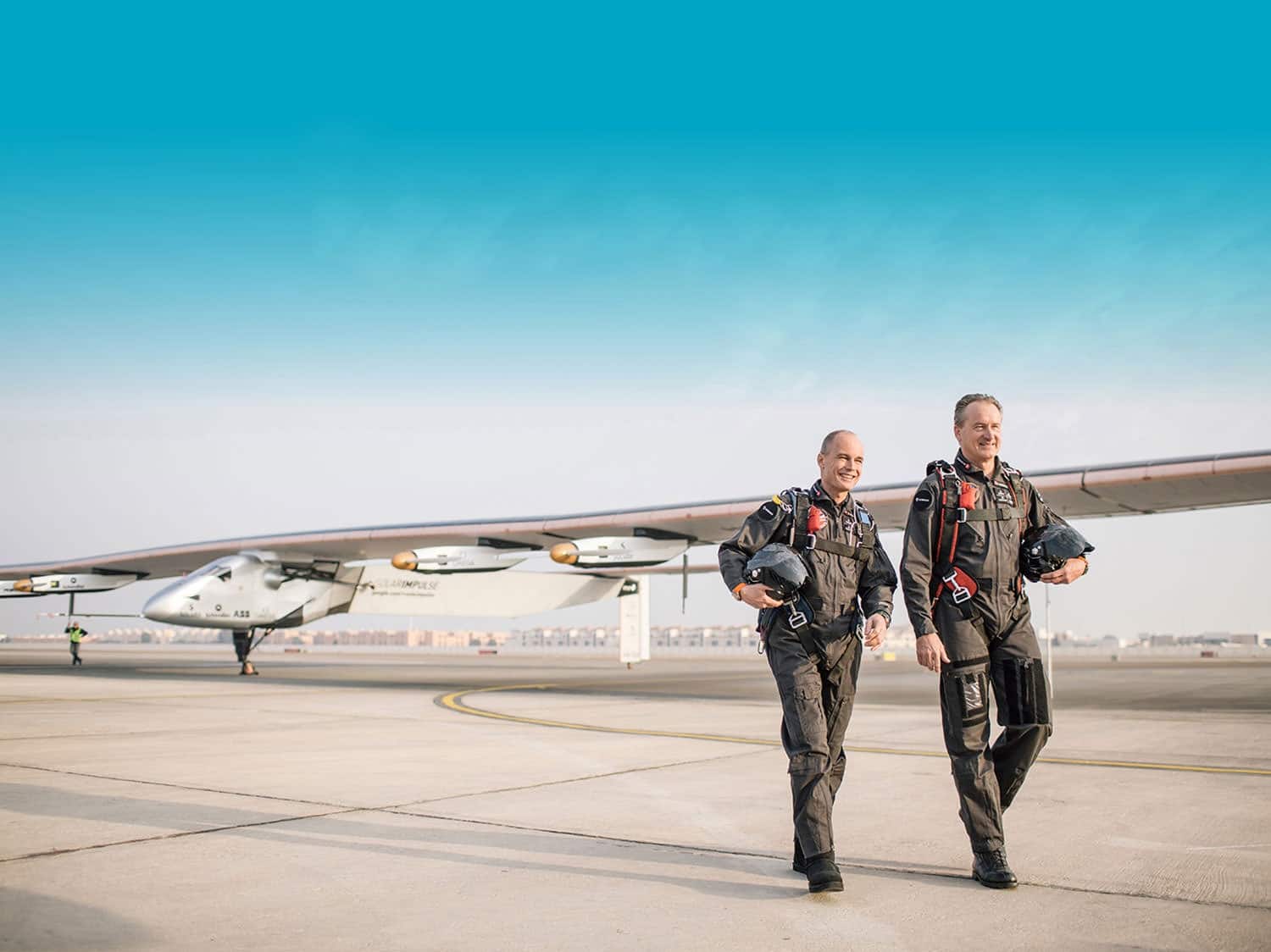 “Too big, too light and impossible to control in flight,” aviation specialists said—apart from Dassault—believing the challenge unattainable.

Contrary to belief, the Solar Impulse 2 ended its ’round-the-world flight in July 2016 without having consumed a drop of fuel. Powered only by the sun’s energy, and piloted by Bertrand Piccard and André Borschberg—the Swiss duo behind its creation—the Solar Impulse covered 40,000 km in 17 legs and 15 months; crossing Asia, the Pacific, the U.S., the Atlantic, the Mediterranean and the Middle East.

“The Solar Impulse project is a remarkable accomplishment that I believe we will eventually look back upon as a Lindbergh moment for electric flight.” Rob McDonald, Development Leader for OpenVSP aircraft software, told ArchiExpo e-Magazine.

Bertrand Piccard, a medical doctor specialized in psychiatry, explorer and aeronaut, who made the first nonstop round-the-world balloon flight, is the initiator and chairman. André Borschberg, an engineer and graduate in management science, a fighter pilot and a professional airplane and helicopter pilot, is the co-founder and CEO. The former’s avant-garde vision and the latter’s entrepreneurial and managerial experience have resulted in record-breaking historical marks and a bright sustainable future.

While Solar Impulse 2 is not the first solar airplane, it is the first to fly day and night, without any fuel, only using energy stored in its batteries. It is also the first to have crossed oceans. The plane’s unusual look undoubtedly helped the message of the project to be spread worldwide. The wingspan of a Boeing 747 Jumbo Jet, the weight of a family car and the power of a small motorcycle, Solar Impulse 2 is the largest aircraft ever built with such a low weight.

All information and quotes have been acquired via the Solar Impulse team’s PR and website. After an around-the-world flight in 15 months, the team was understandably unavailable for interviews. ArchiExpo e-Magazine commends this team on its achievements and looks forward to further development.

10 Years of Design and Calculation

Bertrand Piccard’s vision took off in 2003 when he teamed up with André Borschberg and committed to years of research and testing. The result was the Solar Impulse 2, an upgraded version of the original. While the first prototype of the original was developed in 2009, the new version was unveiled at the Payerne airbase in Switzerland in April 2014. That same year ,they completed flight testing and delivered the aircraft to Abu Dhabi by a cargo plane in January 2015.

“The airframe of Solar Impulse 2 is constructed with lightweight thin materials, such as carbon fiber and honeycomb sandwich panels that reduced the weight of a carbon layer from 80g/m² to 25g/m²,” according to the website aerospace-technology.com.

“The aircraft’s upper wing surface is covered with encapsulated solar cells and the lower surface is constructed with a high-strength, flexible skin. The aircraft was built with 140 carbon-fiber ribs at a gap of 50 cm intervals, in order to provide wingspan rigidity.”

The aircraft features a 3.8 m³ cockpit that seats a single pilot and is not pressurized or heated, which provides greater energy efficiency.

“The aircraft features a total of 17,248 monocrystalline silicon solar cells, which are 135µ thick and mounted on the wings, fuselage and horizontal tail plane. Energy gained from the solar cells is stored in lithium polymer batteries, manufactured by Kokam, optimized to have a density of 260 Wh/kg. With a total mass of 633 kg (2,077lb), the batteries store power needed to allow the aircraft to fly during nights.”

Learn more about its design and the key players and suppliers here. Get information on a variety of monocrystalline silicon solar cells here.

“Building teams is both art and science. The value of talent is created through differences, not similarities.” André Borschberg

Ninety people make up the Solar Impulse team, including 30 engineers, 25 technicians and 22 mission controllers, supported financially and technologically by over a hundred partners and advisers. Each branch of the team plays a key role.

The engineers, responsible for the configuration and structure, energy and propulsion and workshop teams, built the airplane.

“Since the beginning of the ’round-the-world flight, some of them follow Solar Impulse 2, taking care of maintenance, while others are based at the Mission Control Center (MCC) in Monaco.”

Along with the flight mission team—which includes meteorologists, mathematicians and air traffic controllers—engineers prepare and follow the flights, and are in constant communication with the pilot. The flight-tests team is in charge of the ground tests and training and maintenance flights, before the beginning of each mission. The ground crew is responsible of handling the plane in the hangar and on the runway.

“The project being as much about engineering as communication, the marketing & communications and multimedia, graphic design & photography teams are also important elements of the adventure.”

A Committee for Clean Technologies

“Our ambition for Solar Impulse is for the worlds of exploration and innovation to make a contribution to the cause of renewable energies. We want to demonstrate the importance of clean technologies for sustainable development, and to place dreams and emotions back at the heart of scientific adventure.” Bertrand Piccard’s initial vision, written in 2004.

Now in 2016 and Bertrand Piccard’s vision enters a phase of concrete reality. Less than four months after Bertrand and André completed the epic adventure of flying around the globe with no fuel, the Solar Impulse Foundation launched the World Alliance for Clean Technologies in Marrakech.

“What Solar Impulse has demonstrated should now be taken further,” Bertrand Piccard said upon the final landing in Abu Dhabi.

The goal of the Solar Impulse Foundation and the freshly launched World Alliance for Clean Technologies is to demonstrate which solutions are available to deliver on environmental and health targets.

“If an airplane has successfully flown day and night without fuel, then we can power our world on clean energy,” Bertrand Piccard.

Cairo, Egypt, July 13th 2016: Solar Impulse successfully landed in Cairo after 2 days of flight with André Borschberg at the controls.

A Family of Explorers

Bertrand Piccard is the third generation of Piccards inventing and exploring the world. His grandfather, Auguste, created the pressurized capsule and did the first flight in the stratosphere, and his father, Jacques, invented the bathyscaphe and holds the absolute deep-sea diving record.

The Piccards continue to write history: A new 90-minute documentary called Solar Impulse – L’impossible tour du monde premiered Monday, November 21 at the Cinéma Gaumont Opéra Capucines in Paris. The film played to a full house of more than 700 people who had come to see the preview.

“The question now is not so much whether humans can go even further afield and populate other planets, but rather how to organize things so that life on Earth becomes more worthy of living.” Auguste Piccard, 1931

“The public has not yet woken up to the extent and seriousness of the problem of pollution.” Jacques Piccard, 1972

“Adventure in the 21st Century consists of applying human creativity and the pioneering spirit to developing a quality of life which present and future generations have a right to expect.” Bertrand Piccard, 2004