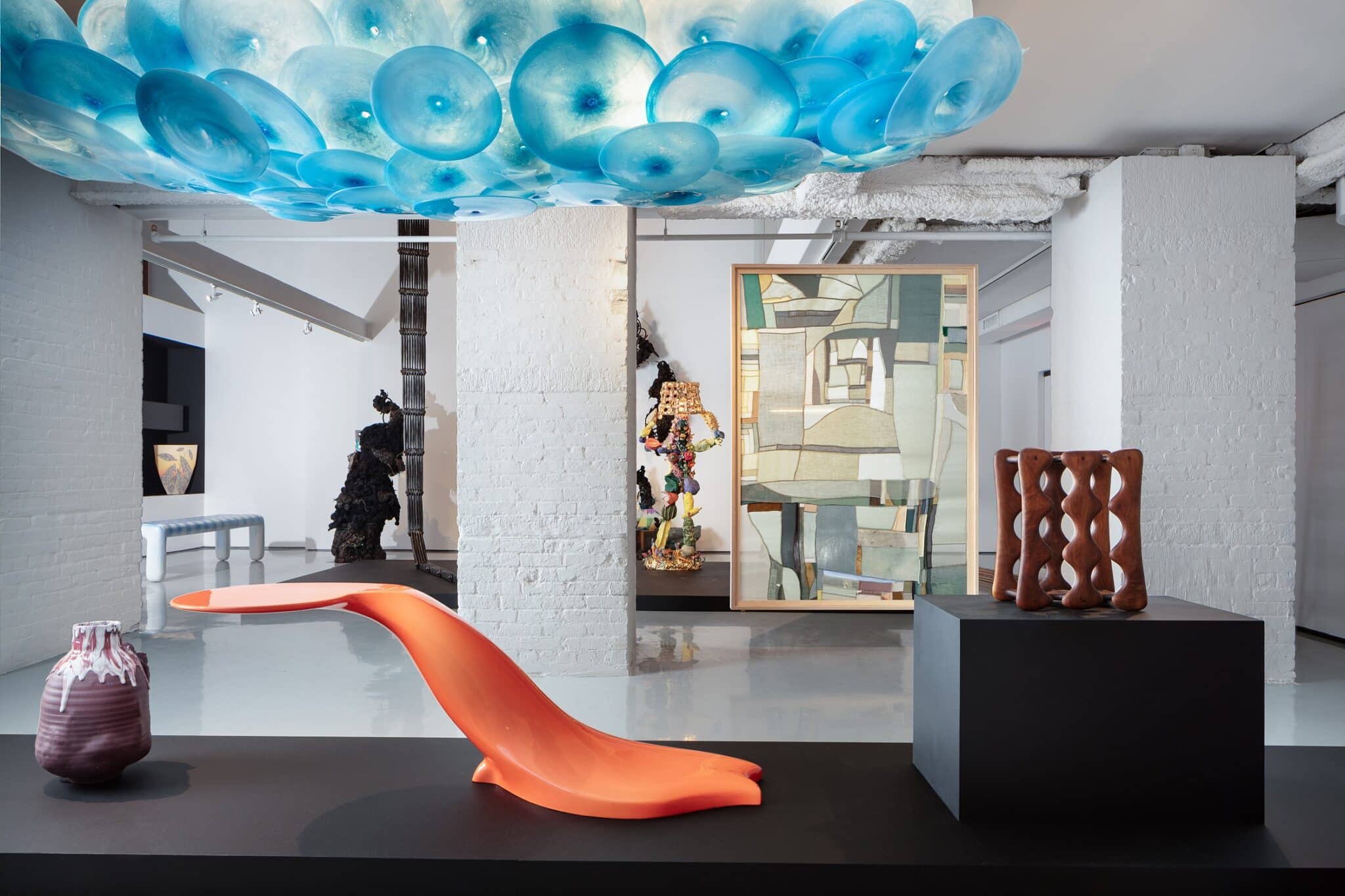 In 1969, a seminal show titled Objects: USA transformed the design world and brought worldwide recognition to the American Studio Craft Movement. The exhibition debuted at the National Collection of Fine Arts, now the Smithsonian American Art Museum in Washington D.C., and traveled to museums throughout the United States and Europe. Craft artists from the show such as Sheila Hicks, George Nakashima and Anni Albers became superstars.

Now, a major new exhibition, Objects: USA 2020 at the New York City-based gallery, R & Company, which opened February 16th and runs through July 31st, celebrates the influence of the 1969 show, as well as the current Renaissance in the craft arts movement, by incorporating artworks from fifty participants from the original show alongside the works of 50 more recent practitioners.

Objects: USA 2020 couldn’t be timelier.  After a lost decade in the 90s, when craft arts fell out of vogue, they are experiencing a major comeback.  Although the original Objects: USA exhibition elevated the stature of craft arts, it also helped spawn a trendy specialized niche market for craft artists, whose commercial outlets up until that time primarily consisted of crafts fairs and the few art galleries that would show them.

“There became a bigger commercialized crafts world that eventually died at the end of the 1980s,” says R & Company Principal Evan Snyderman, “A lot of the important artists in the original exhibition languished, although some of them became famous.”

Standout work from superstars in the 1969 exhibition is on display in the R & Company exhibition. One is a prototype of a rocking chair made of walnut that Sam Maloof designed and built for several presidents in the White House. The Colonial influence is exquisitely crafted with elegant lines, tapered slats and elongated rockers.

Other works from the original 1969 cohort are fantastical and express personal narratives, such as The Principal Wife Goes On (1969) by noted weaver Sheila Hicks colorful drooping assemblage of linen, silk, wool and synthetic fibers called. This piece, on loan from the Smithsonian American Museum, is a mediation by Hicks on the lives of women in polygamous marriages in Africa.

There also are embellished traditional forms from artists in the 1969 show that dazzle the viewer with ethereal beauty and hidden meanings. Vase, a 1953 work by Maija Grotell, is a glazed green earthenware piece that looks as though it was rescued from an archeological dig and has a mysterious palimpsest beneath the white birdlike images that adorn its surface.

The second-tier status that craft, especially pottery and weaving, was accorded during much of the 20th century was related to the status of women at the time. A major bias within the fine art world held that the spheres of painting and sculpture were more fitting for male artistic expression.

“There are a lot of textiles in the original show, as well as the current one, and there is an interesting history to that,” says R & Company sales associate Chanel Host, “Textiles were the only thing they {cultural arbiters} would let women do. For a lot of women that was their predominant art form.”

Thanks in part to the growing interest of fine artists in craft, Snyderman says objects produced by actual craft artists are once again being embraced as high art.

“The art world is coming around to seeing ceramicists and textile artists not just as potters or as weavers,” Snyderman says, “These artists are now showing in art galleries again and pushing boundaries. Now, it is not so much about the craft, even though these artists might be using a traditional craft medium.”

Although it is difficult to generalize about such a wide variety of work, Snyderman says that the craft artists from the 1969 exhibition tend to work in single mediums such as textiles, ceramics and wood, whereas the newer practitioners in the exhibition are often working with mixed media.

A prime example of the mixed media approach is Malkern’s Ghost (2017) by Misha Khan, a relatively recent graduate from the Rhode Island School of Design. This work comprises found objects, ceramic beads, hand-dyed grass and fibers. The various materials are slapped together in a low-tech arbitrary manner and aside from the craft involved in making this piece, it is an example of the increasingly nebulous border between fine art and craft art.

Many of the contemporary works in Objects: USA 2020 tackle contemporary throwaway society and its role in polluting the planet. Skinned Chair (2019) by Joyce Lin, consists of an antique chair that has been flayed with a saw and placed atop a steel and epoxy platform. In the show’s catalog, Lin is quoted as saying that she is concerned with how the “impacts of supposedly disposable materials like plastic, foam, and resins last far beyond the time scales that we as humans can fathom.”

Ends (2012) by Jordon Moore is made from dozens of historic silver-plated engraved platters that have been fused together into a giant artwork. The work recalls the days when every socially prominent family had a full silver set and according to the exhibition catalog, the work is intended as a commentary on conspicuous consumption. The catalog asserts that instead of calling attention to the people who once owned the platters, Ends is emphasizing the role of the silversmiths who made them.

What unites the work of the craft artists in the original show with the work of the more recent ones is that both cohorts are making objects that generally require a lot of technical skill, not simply designing them. “The studio craft movement was a uniquely American thing that happened in the 1960s, where you had the artist craftsperson,” says Snyderman, “It was something that didn’t really occur in European design history, where you had the designer and the fabricator.”

Today, the boundaries have collapsed even further and many of the works on display at R & Company would not be out of place in a conventional fine arts art gallery. However, the current state of affairs also hearkens backs to an era before the age of industrialization when tapestries and ceramics were accorded the same status as paintings.

“Historically all the artworks were under one roof,” says Snyderman, “and then this hierarchy developed hold over the past hundred years where painting and sculpture became art and everything else became decorative art—so it is interesting that in the past couple of years we have been going back to the old ways of looking at art objects.”