Milan: home not only to fashion and sartorial elegance but cutting edge buildings too. From the magnificent Duomo to the modernist Pirelli Tower to the organic lines of the Bosco Verticale, this northeast Italian city has always been a progressive metropolis when it comes to architecture.

Over the past decade, and given impetus by the World Expo in 2015, two major urban regeneration projects—Porta Nuova and CityLife—have continued Milan’s architectural evolution. Of all the gleaming new skyscrapers these two mixed-use clusters contain, it is perhaps CityLife’s 175-meter PwC Tower, designed by Studio Libeskind and slated for completion at the end of this year, which is the most impressive.

“These three towers were always conceived as a grouping,” explains Studio Libeskind principal Yama Karim in an interview for ArchiExpo e-Magazine. “I see them as chess pieces, in dialogue with one another. Our tower completes the composition.” 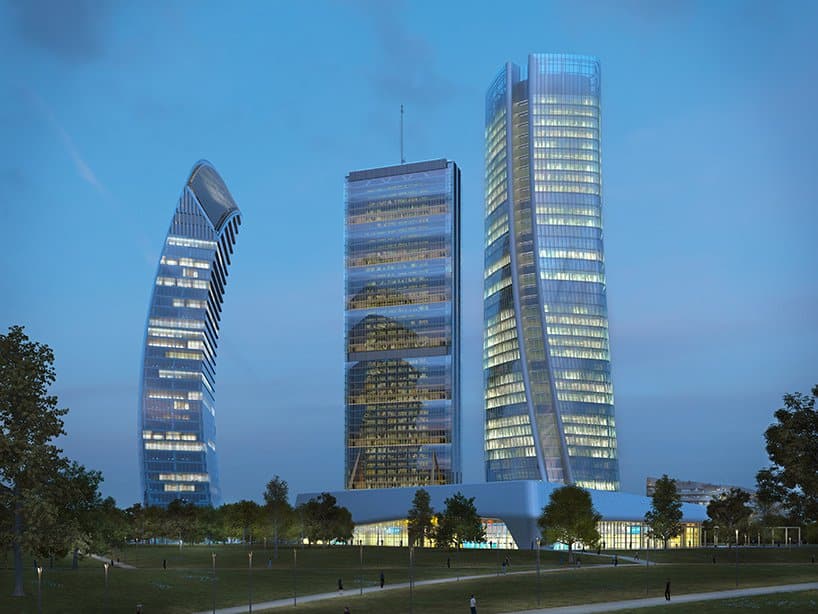 Awarded LEED Gold certification, the PwC Tower incorporates a host of sustainable technologies, with a crown of solar collectors and sophisticated natural lighting and heating systems. Its staggered facade is made of sustainable, state-of-the-art glass, designed to reflect the public space below and vistas around. Thanks to its unique terracing, there will be no repeat of the “Walkie Talkie” effect, when the concave exterior of London’s 20 Fenchurch Street skyscraper focused the sun’s rays and melted part of a car.

The typically low-rise nature of Milan’s built environment means the PwC Tower contrasts sharply with the sea of palazzi, churches and houses that encircles it.

Yet Karim is keen to emphasize the tower’s connectivity within its surrounding urban fabric.

“At the base of the tower there are retail and public amenities which help to dissolve the boundary between the public and private commercial realm,” he explains. “The vehicular flow to and from the building is also completely separate from the cycle-pedestrian flow, enhancing its accessibility.”

When fully finished in 2020, CityLife will be the largest new public space created in Milan since the Parco Sempione opened over a century ago. As a striking addition to the city’s twenty-first-century skyline, the PwC Tower not only anchors the project but adds to Milan’s rich architectural legacy.