Les Bords de Mer, a Seaside Gem in the South of France

It was the year of 2008 when I built a snowman in the South of France, the beginning of my life as an expat in France and the first time in thirty years snow covered the coastal streets of Marseille. That same year I discovered the delicious taste of magré de canard in Eden Roc, a small restaurant within the hotel Le Richelieu and its time weathered facade. A major emblem in the 30s, the cracks in the facade referenced years of living—damaged by the waves, rough winds and sea salt in the air. Streetside, one would barely have known the interior housed large glass windows revealing the beautiful Mediterranean sea.

Ten years after my initial discovery, I walk along the Corniche to find the building has been transformed into a new Art Deco hotel: Les Bords de Mer. Although the structure resembles the old hotel and restaurant, its new coating is refreshing. Street side, construction workers are currently installing a black metal garde-corps—railings. Enticed, intrigued, I could not help but wander inside this recently refashioned seaside gem.

On Wednesday, March 6, 2019, I met Marseille-based architect Yvann Pluskwa who has perfectly preserved the building’s classified facade—although its coastal “skin” is now as white as the rocks that plunge into the sea—and who has completely remodelled the interior.

“In the past, the ‘face’ of this hotel is what brought it to life, created its identity. If it loses its face, it loses its identity. We wanted to be sure to maintain it—to prolong its life in a new era, so to speak,” Pluskwa said. 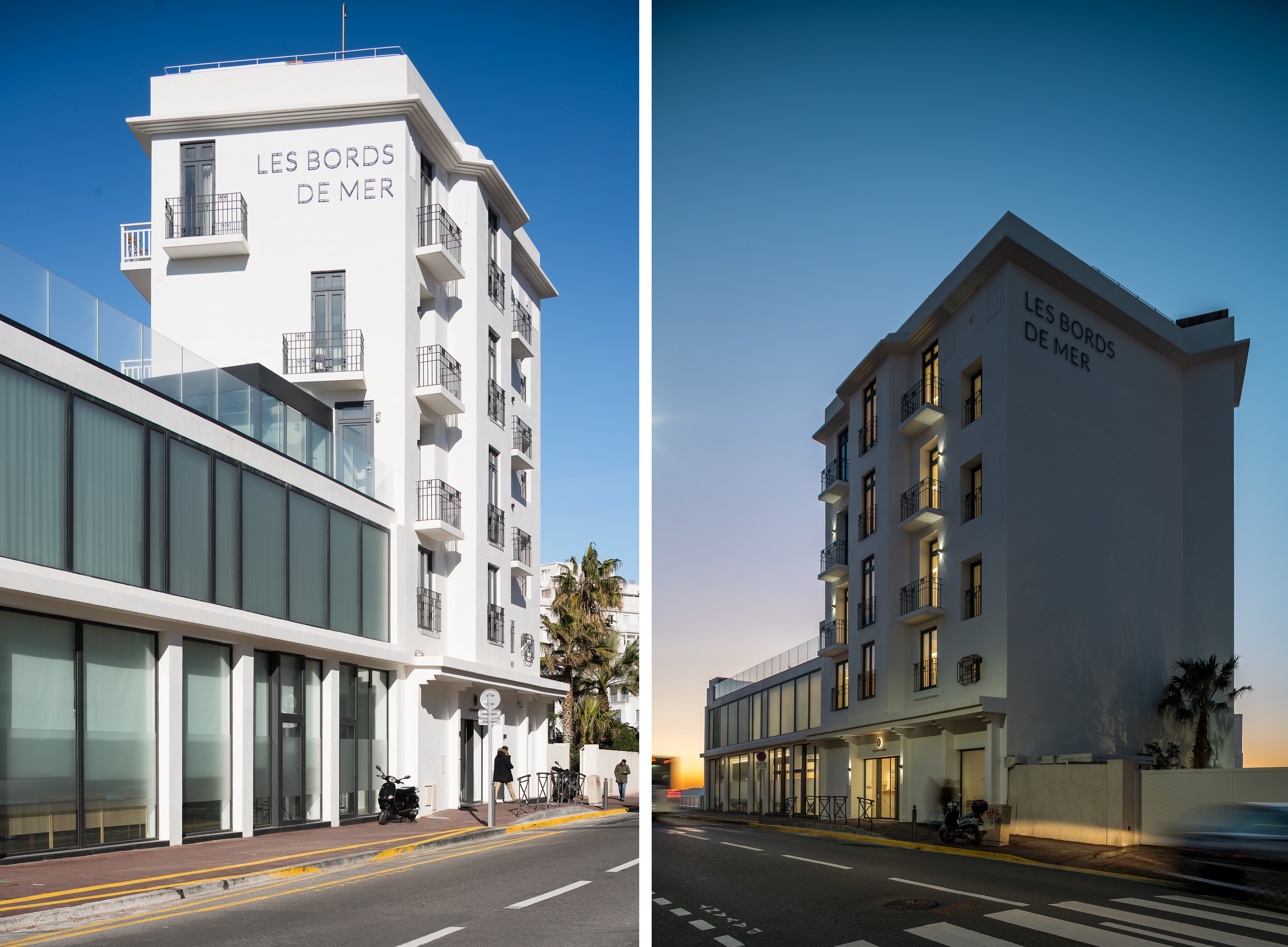 The structure remains almost identical, he said, with the exception of an additional floor where there was once a half-floor acting as a covered terrace or attic. He took elements from the original “last floor” facade and rebuilt them onto the new one, like the sculpted lion head found at the top right side of the facade facing the street.

Seaside, the windows on the last level were not the same size or in the same spot as those on the other levels, so he matched them better, putting them in alignment. 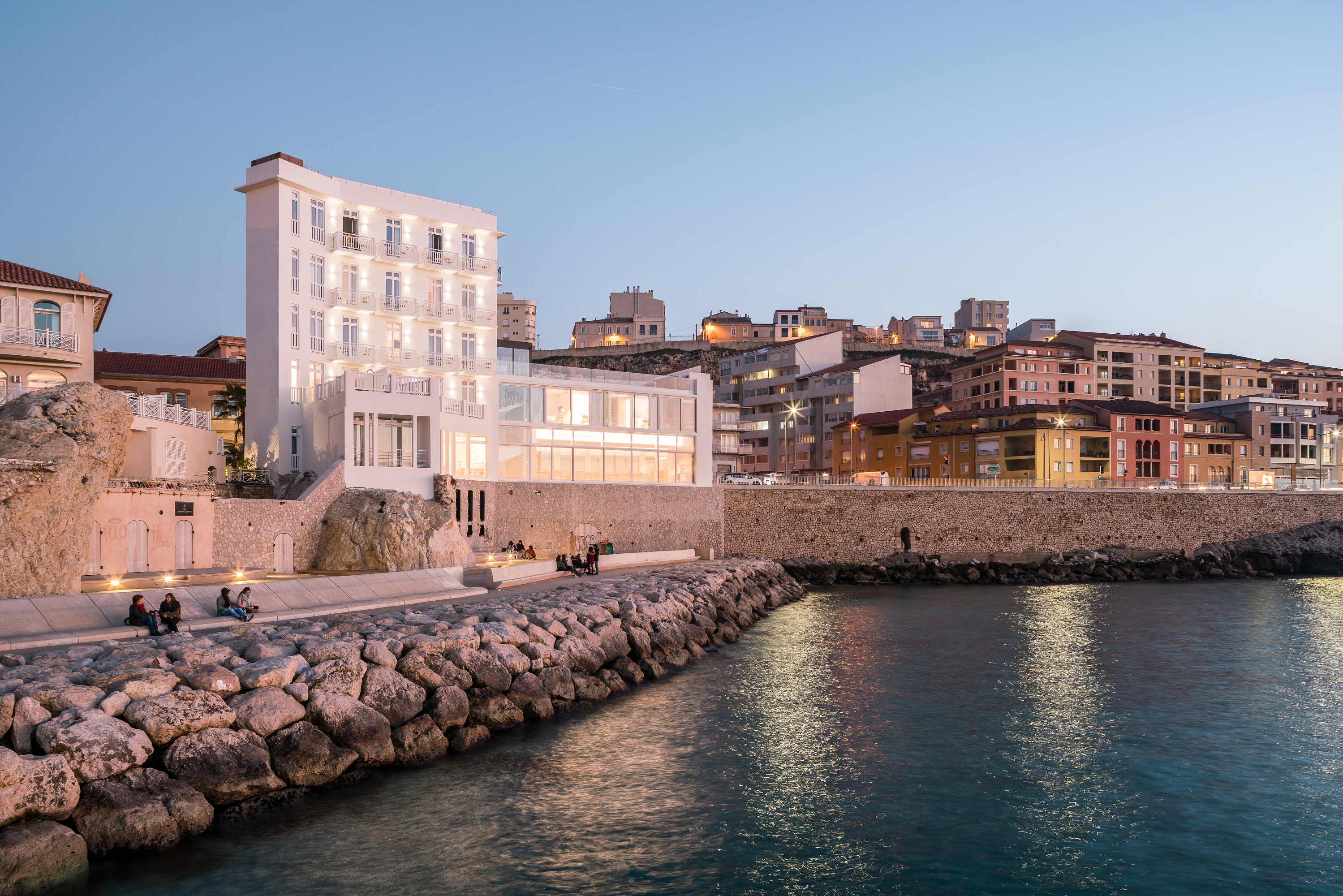 The biggest challenge, according to the architect, was remodelling the interior which comprised many bizarre forms.

“Every week we discovered a new funky space to figure out.”

Since the previous hotel was occupied until construction on the new one began, the interior remained a little mysterious. Luckily, the architect enjoys working on buildings that need to be figured out and that allows for true architecture to take place.

There are a few new aspects to the architecture. They decided to drill into the rock below the hotel in order to obtain additional space and created a spa area from which long, thin windows offer views of the sea. It wasn’t so easy, though. They needed to build a support system that would allow those working on above levels to continue, while they drilled below. Much of the rock remains, contributing to the sense of peace and well-being of those who enter to receive Balinese massages and organic Ren Skincare treatments.

The 19 rooms, all with terraces or balconies, are all dream watchtowers to admire the sailboats that sail around the Frioul islands. A rooftop bar occupies the space above the restaurant and a new pool sits on the roof for hotel guests or private parties. The restaurant gives pride of place to the Mediterranean cuisine and where the rosé comes from the vines of Lourmarin.

The inauguration for this dream hotel is currently scheduled for March 25, 2019.