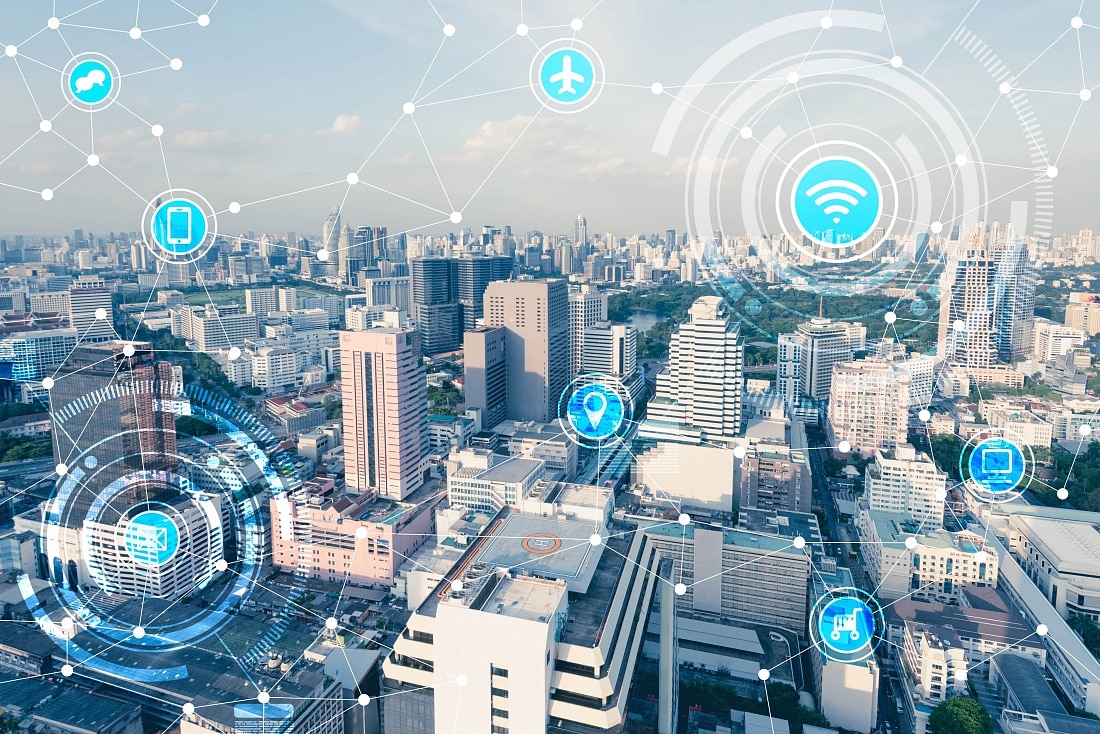 Following the 4th edition of the Consumer Electronics Show (CES)  Asia last June 2019, Echangeur held an important meeting in Paris to discuss the major tech players in the market.

In a phone conversation with Guillaume Rio, manager of technological tendencies at Echangeur by BNP Paribas Personal Finance, we learn more about current tendencies and the future of Artificial Intelligence for smart cities. What’s already taking place in Asia? How do their smart cities compare to those in Europe and North America? Read the interview to find out!

For over 20 years, Echangeur has attended tech events and delivered a tech analysis to its b2b customers. The company focuses on how technology will impact the life of the consumer and how it can improve customer experience—within the home or a store, for example. Echangeur explains to its customers the world of tomorrow, through the integration of technology, and how it will impact their businesses by detecting new consumer paths and can then provide solutions to its clients who will need to respond to new consumer habits.

Exchangeur invites clients to its showroom on the outskirts of Paris where they can see the latest trends, the company’s consumer analysis and proposed solutions by its tech partners. In addition, it organizes guided tours through stores in cities such as Paris, Berlin, London, NYC and Shanghai, in which various types of technologies have been integrated. It’s a great way to experience how the technology is used in real situations, according to Guillaume Rio.

ArchiExpo e-Magazine: Can you tell us about what you found interesting at CES Asia?

Guillaume Rio: This year there was a big automotive sector present both in conferences and at the booths with over 60 companies presenting automotive solutions. My first impression of CES Asia is that we’re not only talking about technology but ecosystems.

ArchiExpo e-Magazine: Can you tell us about these ecosystems?

Guillaume Rio: An important fact to know is that 98% of Chinese internet users are on the mobile phone. Most of them don’t have a computer. This is why Alibaba and WeChat are very popular: Their phone applications focus on the mobile phone with the tagline, “mobile first.” Also, China is the biggest and number one investor in AI, in the world (46%). The United States sits 2% below China. Only 10% is shared between Canada, Europe and Israel.

That said, China is involved in AI for applications such as face and voice recognition that it plans to use in all its next smart cities and has already implemented it. China was the first country to succeed in face recognition, which can be found everywhere [in China], such as in malls and airports. Customers don’t need to use their smartphone or bank card to make payments anymore; shops can use a face-screening method for payments. If you’re running late for a flight, a camera at the airport can scan your face and give you important information about your flight, like the gate number. Tech leaders in China aren’t as concerned about consumer products as they are the services they provide.

ArchiExpo e-Magazine: How are the tech giants in Asia creating ecosystems?

If we start with Baidu, they’ve created a program called Apollo which is an open-source for autonomous cars with over 60 manufacturers as partners providing over 300 car models; they want to develop an operating system for the next automotive car, and in fact they’re developing voice and face recognition to detect everything you’re saying in your car which can connect to your smart home and wallet and city. They want to be the hub of services. Ten miles close to home, the AI-powered camera inside your car can recognize your face and detect that you want to eat, it will connect to your connected fridge to see what’s missing and indicate what ingredients you need to purchase if you want to eat at home, it proposes a store near home and you get a percentage off if you purchase directly through voice recognition, as an example. They want to be the operating system of your car for the upcoming years. It wants to create its own ecosystem by investing in connected health and smart homes and finance. Not only Baidu, though, they all want to do this.

In China, it’s amazing. Each tech actor wants to create its own ecosystem with IDs. The three-year-old company, Byton, a really young ambitious automotive maker, already wants to make its own ecosystem with what it calls the Byton ID. As with Alibaba and Baido, Byton aims at achieving an all-way connected strategy. They want the ID to have connected access to the person’s health, smart home and more. 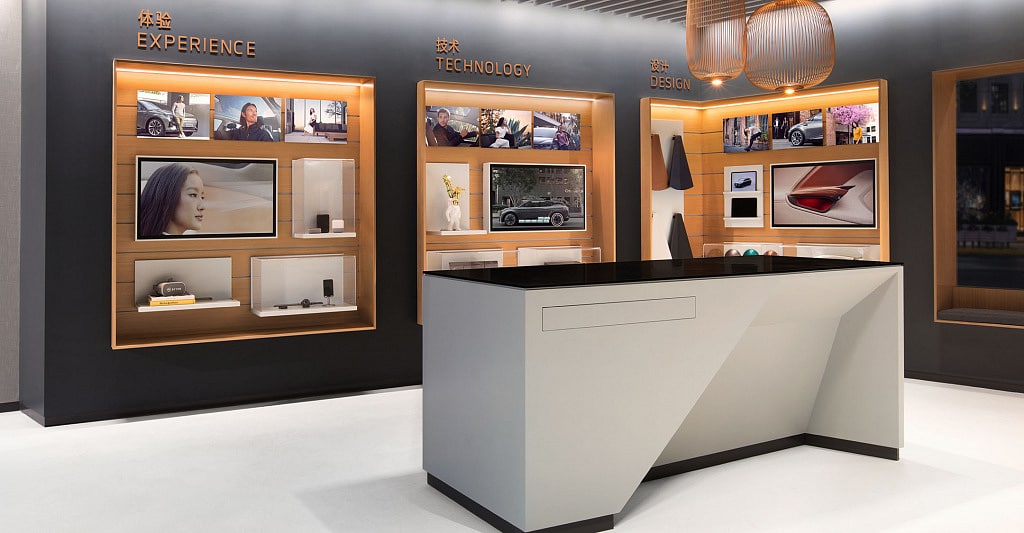 ArchiExpo e-Magazine: How does this affect smart city concepts in China, then?

Guillaume Rio: “Alibaba for the city of tomorrow” has a project called ET City Brain with the slogan, “empowering cities to think with data-driven government”. The company wants to optimize its clients’ resources by instantly correcting issues like traffic and bad behavior. Their first mission is to put many sensors all over the city. The first test was installed in Hangzhou, one of the most congested cities in China with 2.8 million cars in the city. The sensors have an AI-based congestion management system in order to detect how many cars are on a specific street, who’s driving and the emotions of the driver, among other details. With all the data they gather, the sensors help the driver avoid any congestion and areas where bad behavior was detected—if a person is crossing on the wrong side of the road, for example.

In 2018, Alibaba Cloud and the Hangzhou city government announced the launch of ET City Brain 2.0, a cloud-powered and AI-driven urban traffic-management system that aims to boost the city’s efficiency. Read more here.

ArchiExpo e-Magazine: How would you compare smart cities between Asia and Europe or North America?

Guillaume Rio: In China, such technology allows the government to monitor its citizens, rendering the integration of AI technology into daily lives more ‘appealing’ by using citizen data for social scoring, where you get points when you do good and lose them when you do bad. If you lose too many points you can’t get a loan, it’s called social credit. A high score, though, can be beneficial for retaining loans. It’s like a black mural. Thanks to your Alibaba ID you get all the services provided by Alibaba: It knows where you are, what you’re doing, what’s your health in real-time, where you go shopping and can provide you services in real-time all across smart cities, for obtaining loans, detecting diseases, providing a personal live assistant.

The government is being led by Alibaba—if Alibaba and other tech leaders succeed in implementing AI technology into cities, the government has easy access to all of its citizens’ information—, something we wouldn’t expect to see in Europe or North America. As for the Google Sidewalk Lab, for example, the company wanted to create the “smart city of tomorrow”, but contrary to companies in China, Google didn’t need governmental help. Also, the U.S. would refuse to allow Google to manage, ie control, a city. Google found a good place in Toronto, Canada, though, that is letting Google manage a neighborhood. Google has not yet completed this project but it’s on the way. All Google services for this neighborhood have the same ambition as Alibaba, but without government aid.

As for smart cities in Europe, we take Barcelona as an example, but it’s more for administration processes and not so much for governance. It focuses more on an IoT system, like parking spaces with sensors so that drivers can be guided to available parking spots in real-time. It’s more about many small projects within the city, very different from the ambitions of Alibaba to get all the data from citizens.

ArchiExpo e-Magazine: What caught your eye at CES Asia?

Guillaume Rio: Suning, one of the largest retailers in China with 1600 stores all over China, showcased the store of tomorrow at their booth. It displayed how you don’t need to go through the traditional checkout settings because a computer vision detects what products you’ve selected, then a camera checks your face as you leave the store and payment is done in real time. This is quite common in China already, but they want to take it farther and have invested in financial services, smart logistics and have developed their own operating system. A system to manage your smart car, smart home, car insurance, the works, all by Suning through its loyalty card.

Guillaume Rio: Similar to the smart glasses by Google, a company called IFLYTEK has a camera that identifies what it sees and connects to the cloud in real-time in order to obtain information about the building, traffic and many other potential applications. It was tested in Shanghai in a neighborhood that has 5G.

NuraLogix developed a technology called Transdermal Optical Imaging (TOI™) that uses conventional video to extract facial blood flow information from the human face. This information is then processed by DeepAffex™, also developed by NuraLogix, which is a cloud-based Affective AI engine to detect and measure a wide variety of human effects. A person can download the company’s smartphone app which detects their stress index and blood pressure, for example—all done by computer vision and the use of a smartphone.

Many medical startups are using computer vision, what is being called the Doc of tomorrow. It’s not only about detection but how they can help you prevent diseases. It’s becoming more powerful each year.